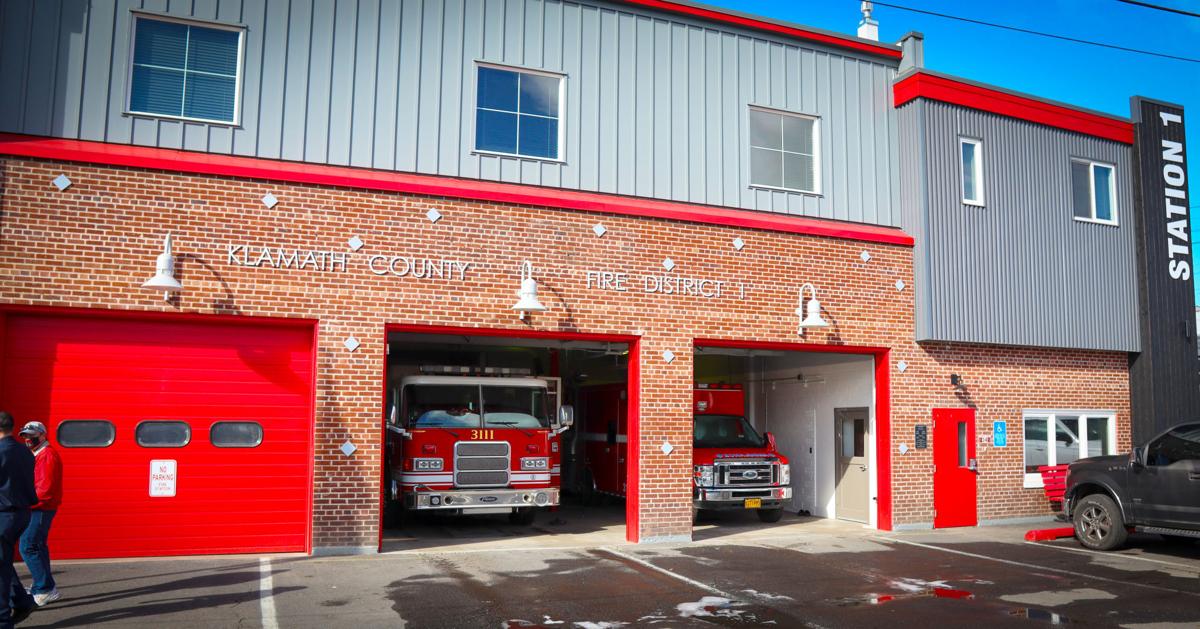 The revamped exterior of Klamath County Fire District No. 1’s station 1. The station received a $2.3 million seismic retrofit to protect the station in the case of an earthquake, in addition to other updates. 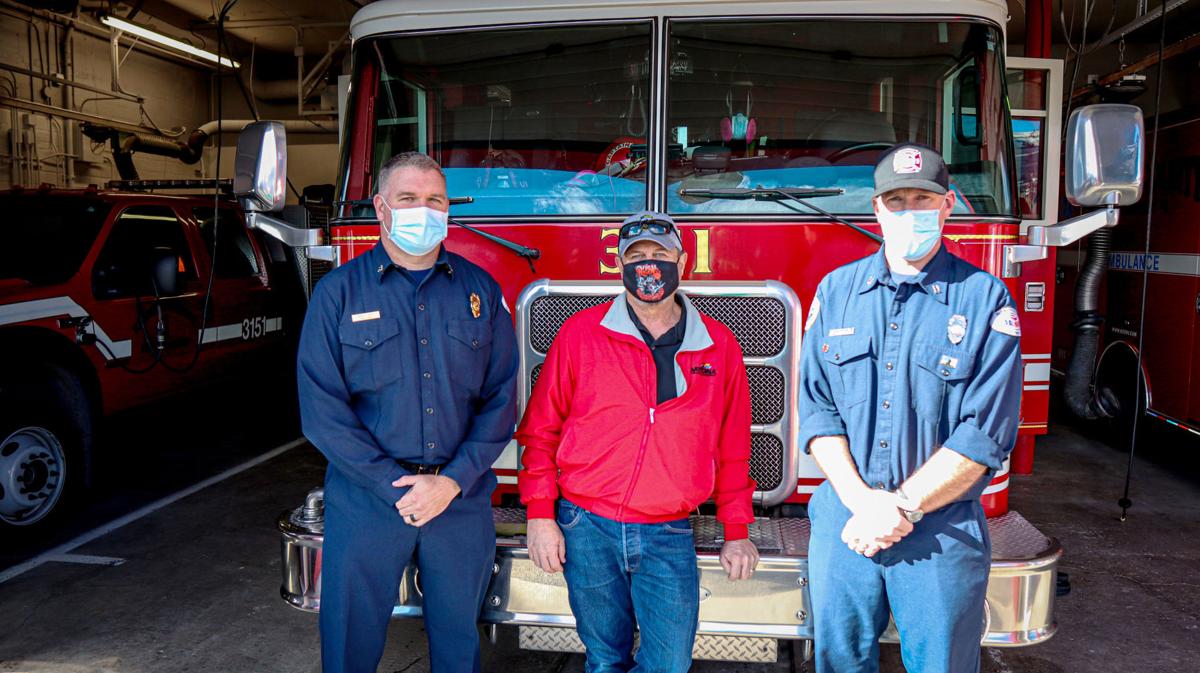 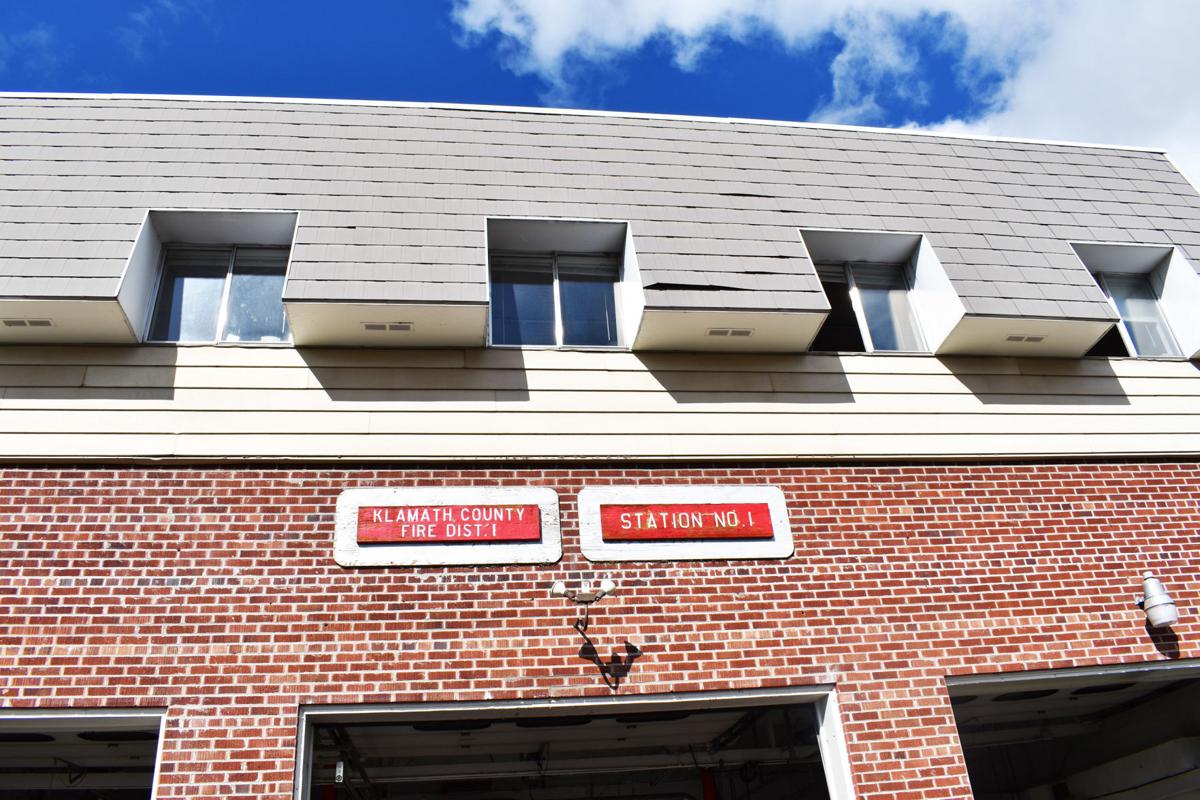 The former exterior of KCFD1's station 1 on Gettle Street. The remodel began in April of 2020. 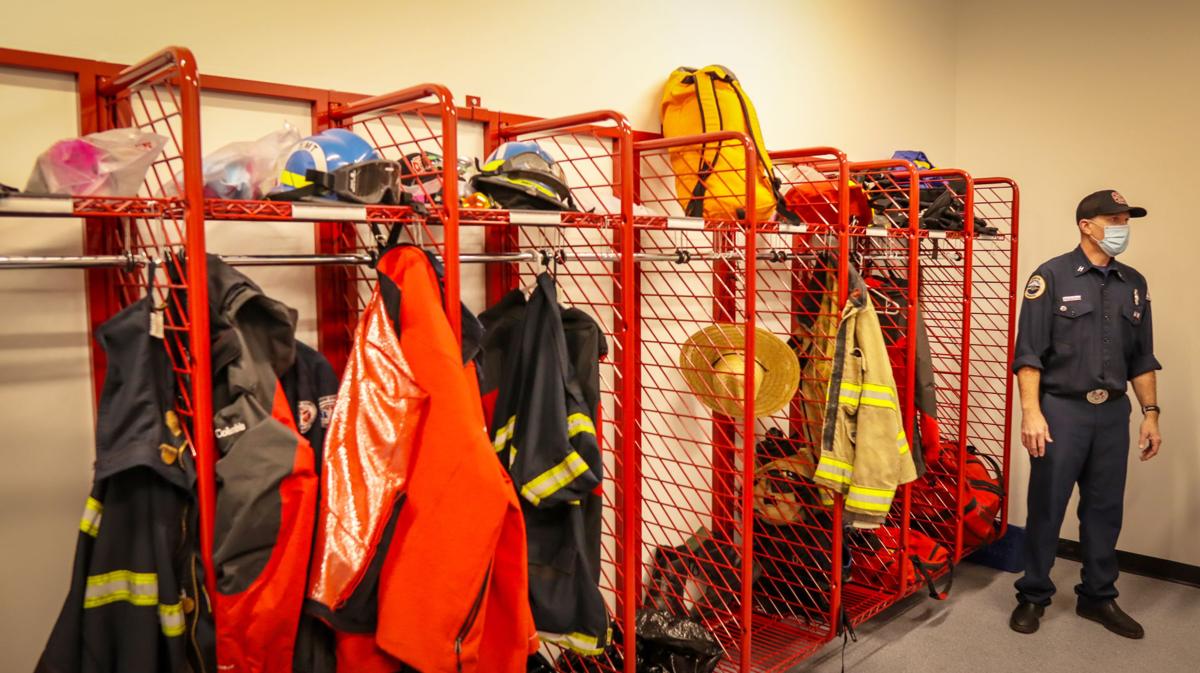 The new and improved turnout room at KCFD1 station 1 features better ventilation to keep crews safe from fumes that cling to firefighting gear. 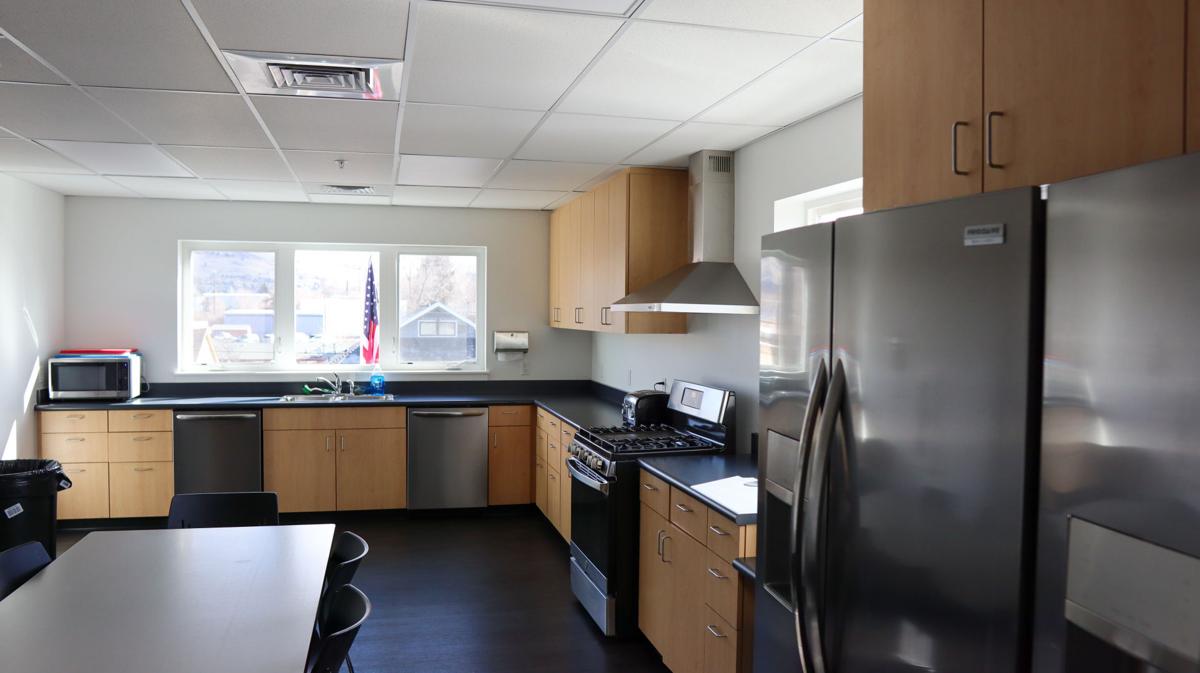 The remodeled kitchen in KCFD1 station 1 that received a $2.3 million seismic retrofit, in addition to an update. 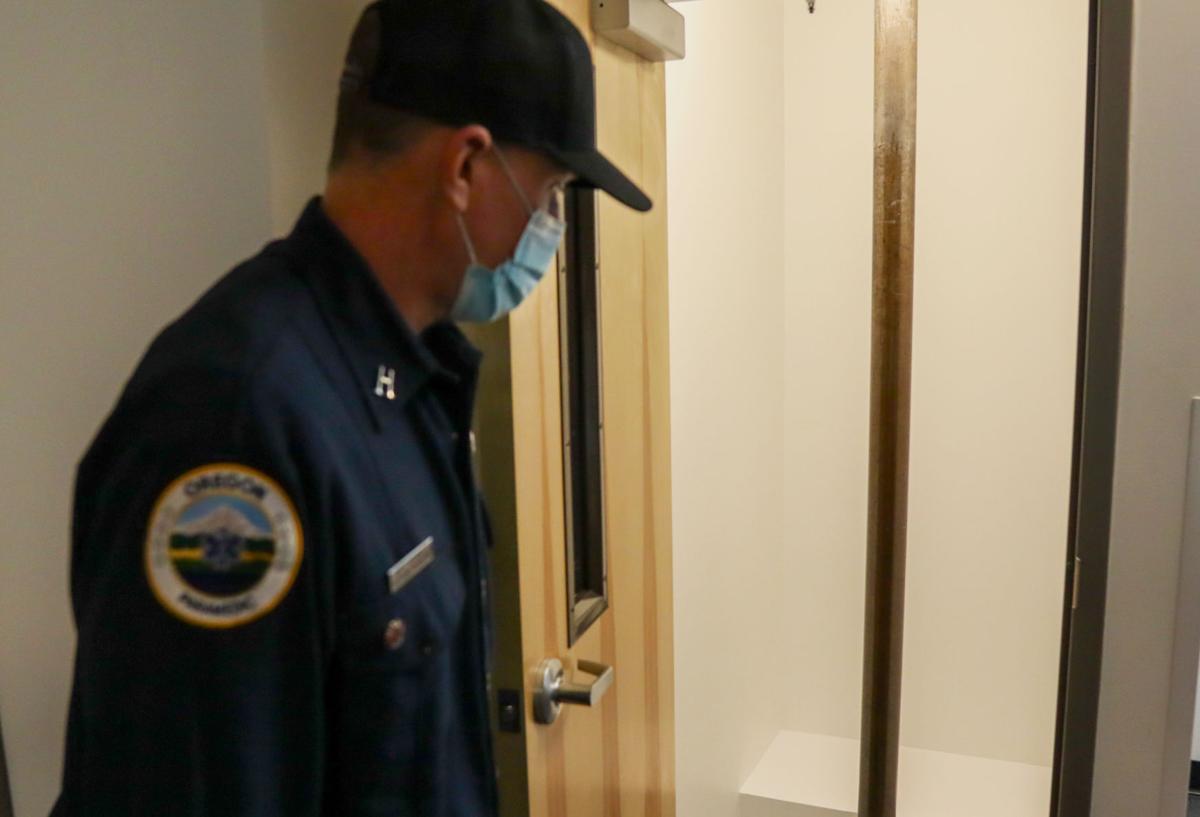 KCFD1 Captain Kyle Shultz looks down one of two fire pole that remained in the remodeled station 1 on Gettle Street near Dairy Queen. 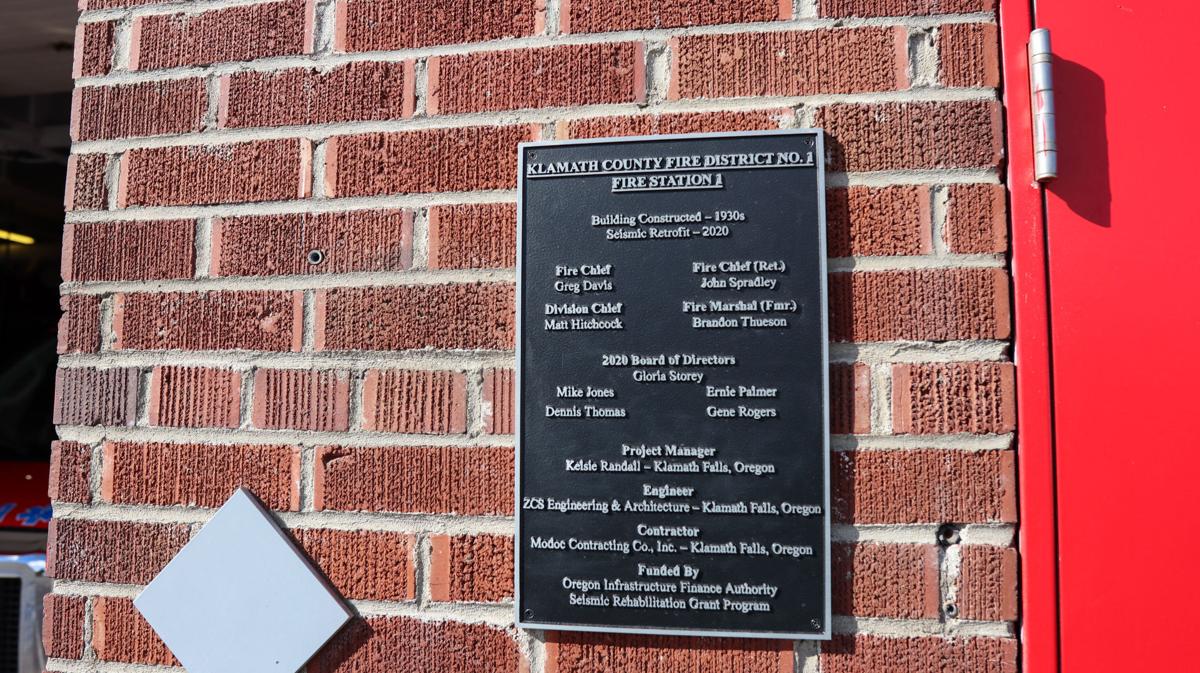 A plaque on the exterior of station 1 memorializes those involved in the building remodel that houses thee shift crews of six KCFD1 personnel. 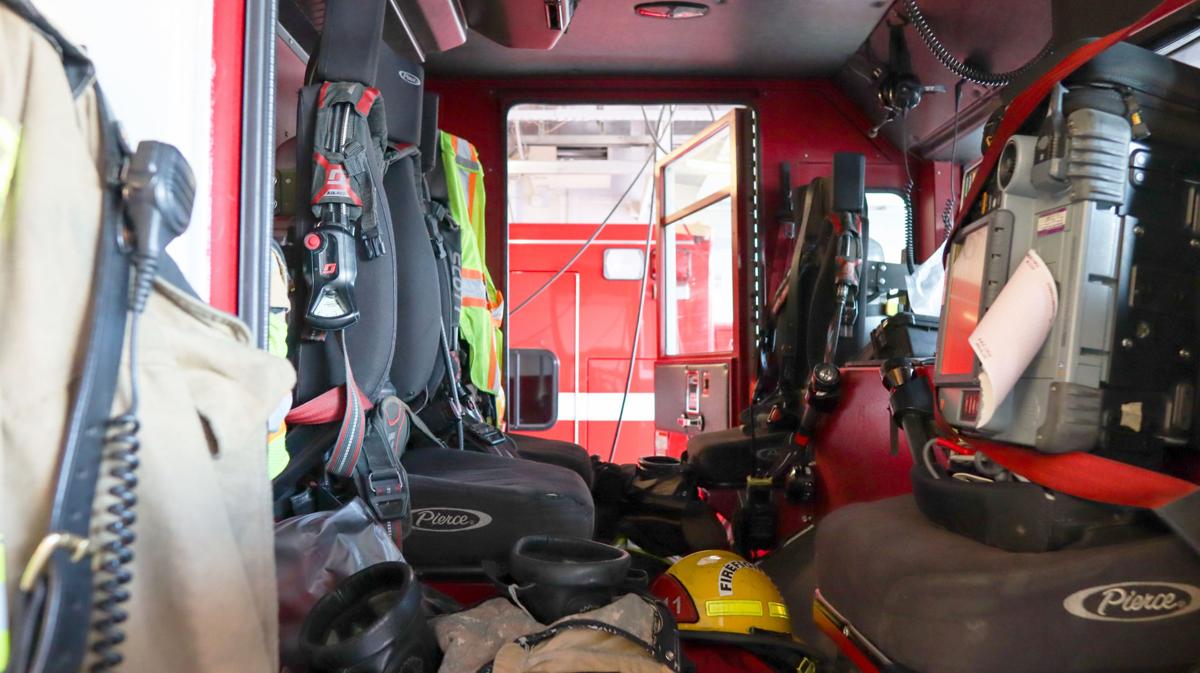 Equipment inside of a fire engine at KCFD1 station 1. 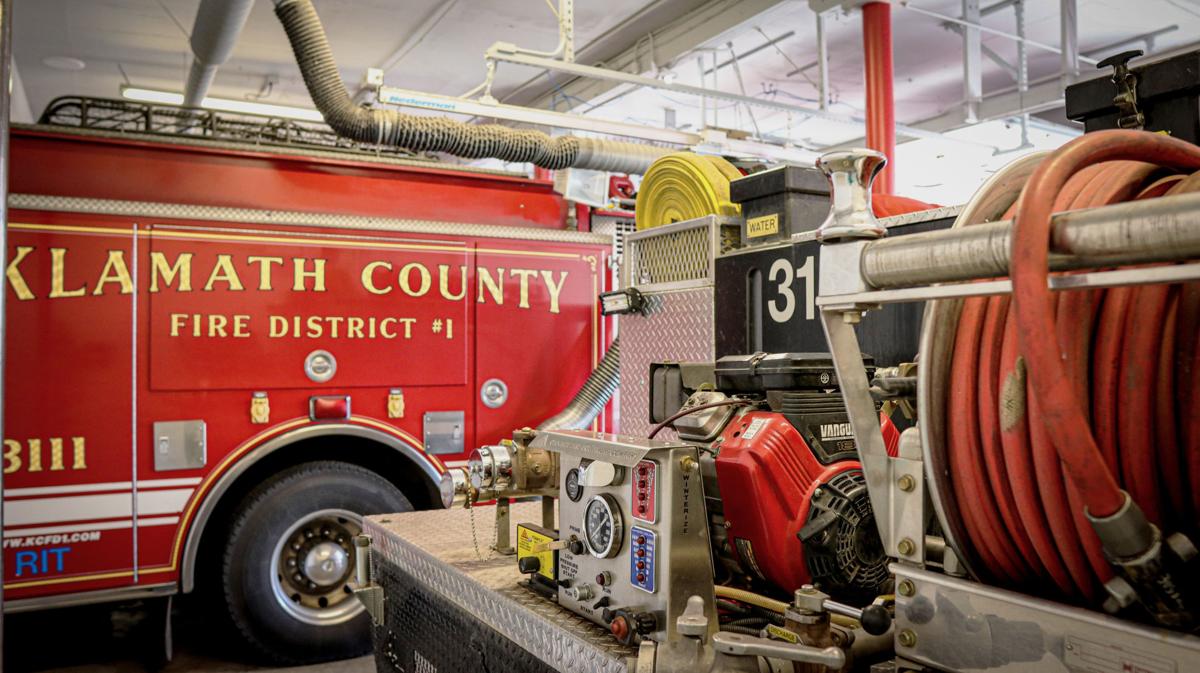 Fire engines at KCFD1 station 1. The remodeled engine bays feature improved exhaust ventilation to keep fumes out of the building and away from crews. 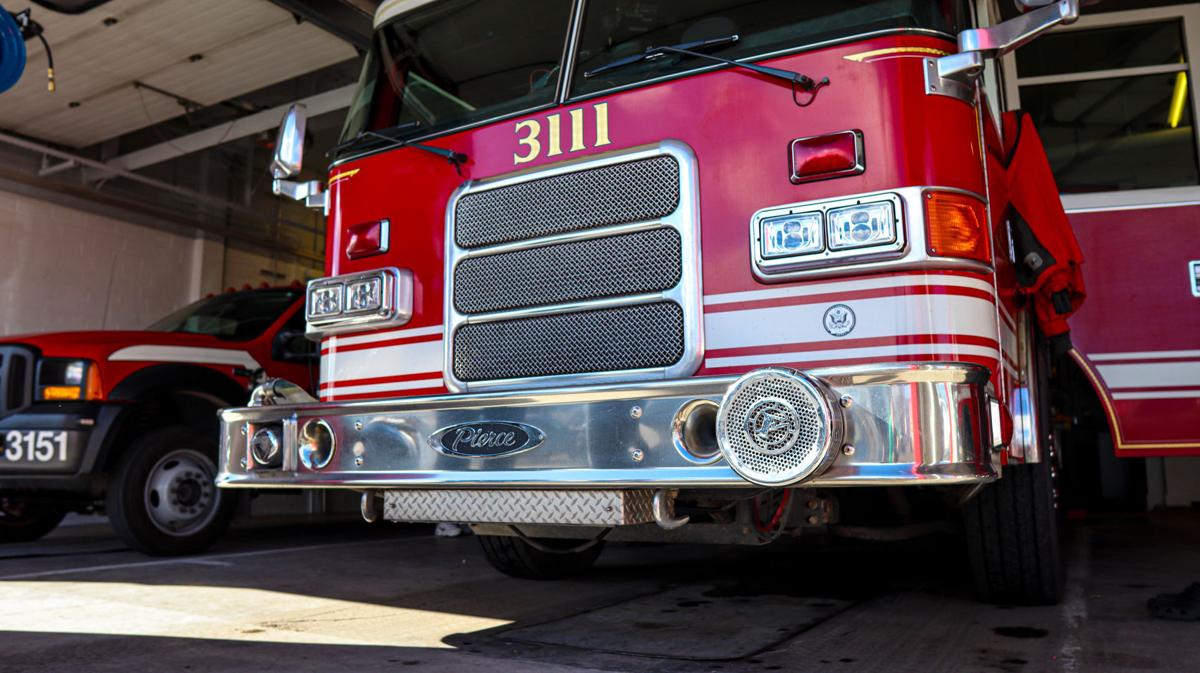 A fire engine at KCFD1 station 1 on Gettle Street. 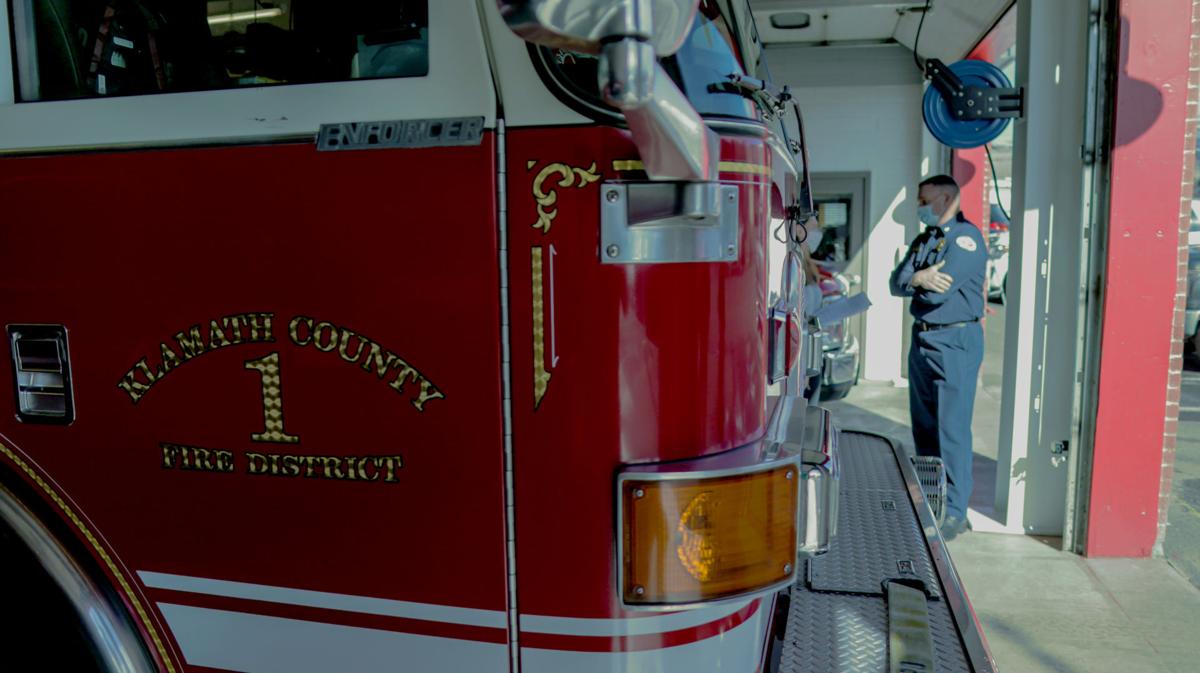 The revamped exterior of Klamath County Fire District No. 1’s station 1. The station received a $2.3 million seismic retrofit to protect the station in the case of an earthquake, in addition to other updates.

The former exterior of KCFD1's station 1 on Gettle Street. The remodel began in April of 2020.

A plaque on the exterior of station 1 memorializes those involved in the building remodel that houses thee shift crews of six KCFD1 personnel.

Equipment inside of a fire engine at KCFD1 station 1.

Fire engines at KCFD1 station 1. The remodeled engine bays feature improved exhaust ventilation to keep fumes out of the building and away from crews.

A fire engine at KCFD1 station 1 on Gettle Street.

The crew of Klamath County Fire District 1 has moved back into station 1 after a $2.3 million seismic retrofit and remodel for the station built in the 1940s.

Station 1 is the third KCFD1 to receive state grant funding to make the buildings more stable in case of an earthquake. Station 1 received grants from Business Oregon and tapped into the department’s reserve funds for an additional $350,000 in upgrades and repairs..

While the district ensures the seismic stability of stations to be able to serve the community in the case of a natural disaster, Chief Greg Davis said it was also a good opportunity to upgrade the old stations.

“Our living facilities have needed some improvements for quite some time,” he said. “We’ve been planning this out, putting in for those retrofits over the last couple of years, and as we’ve been awarded those grants, it’s a pretty good, opportune time to make some improvements.”

The department avoided going out for taxpayer funding or levies, which Davis said is a testament to the department’s planning for the future.

“When you actually put people in these positions to live in these facilities for a third of their lives, and then, we want them to be alert and ready to serve their community,” Davis said. “And so providing a pretty livable space, something that we can actually maintain and take care of, means a lot.”

Station Captain Kyle Shultz said the upgrade sets them up for the long haul of providing services to the growing community.

“The importance is not what we need currently because you have to plan for the future,” he said. “Because our community’s not getting any smaller. We’re not getting any slower. We get busier and busier every year, which means we need the ability to function in the fire station.”

Station 1’s three crews of six respond to about a third of the district’s calls for service. During the remodel, the station’s crews worked out of station 3 on Mitchell Street near Fred Meyer. The ambulance crew was housed in station 2 on Hilyard Ave. near Klamath Community College.

Construction took about nine months to rework the second floor and add improvements to the first floor. The top floor of the station had been added onto over the years as the district grew, which created a sort of patchwork layout with about five different levels on the second story.

The living quarters of the station received some badly needed upgrades, with a bunk room now becoming individual dorms and the restroom also getting added privacy with doors on toilet stalls and shower stalls.

Making the living spaces more comfortable was particularly important, Shultz said, because crews spend 48 hour shifts as the station before having 96 hours, or four days, off.

The station is more functional for the crews with the hodgepodge layout now streamlined with work spaces downstairs and living spaces upstairs.

It is also more practical for firefighting, with a new ventilated turnout room where crews keep their gear. The room will help decrease the amount of fumes and soot the crews inhale when they come back to the station. The station also improved its decontamination room and expanded the engine bays to allow for more room around the fire engines that are bigger these days than they were when the station was built.

Retired Battalion Chief Tom Morehouse spent years living out of station 1 before he hung up his boots in 2016.

“I wish I could’ve worked in this,” he said about the new and improved station. “After all the additions to the station, it had gotten to the point that it was cobbled together. It was hard to work with, and it was falling apart. And I’m really happy that they were able to get the grants and they were able to afford an improvement. I think it’s a big improvement.”

Shultz said it feels good to be back at the station he’s been at for six years of his almost 20-year career with KCFD1. As much as the modern design is more comfortable, he said he also appreciates the features of the old station that stuck around, like the brick façade on the first floor.

“It’s nice because you’re back in your little community that’s yours—we all serve the community, right, but this is our response area,” he said. “It’s comfortable, it’s clean, and I couldn’t be happier to be back at this station.”

Next up is station 4 near Oregon Institute of Technology. That station is in the design phase of a similar, grant-funded seismic retrofit.

For a look inside the remodeled station and a tour of the station before construction, visit the H&N’s YouTube channel.