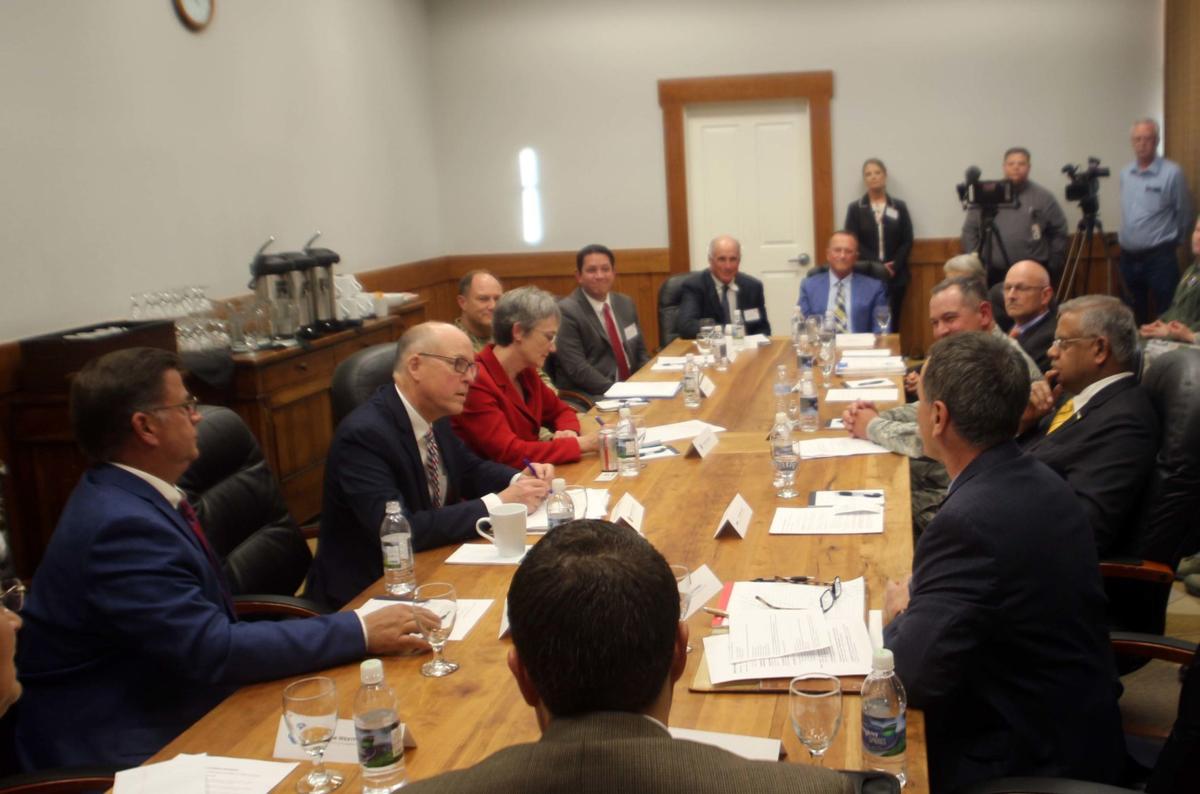 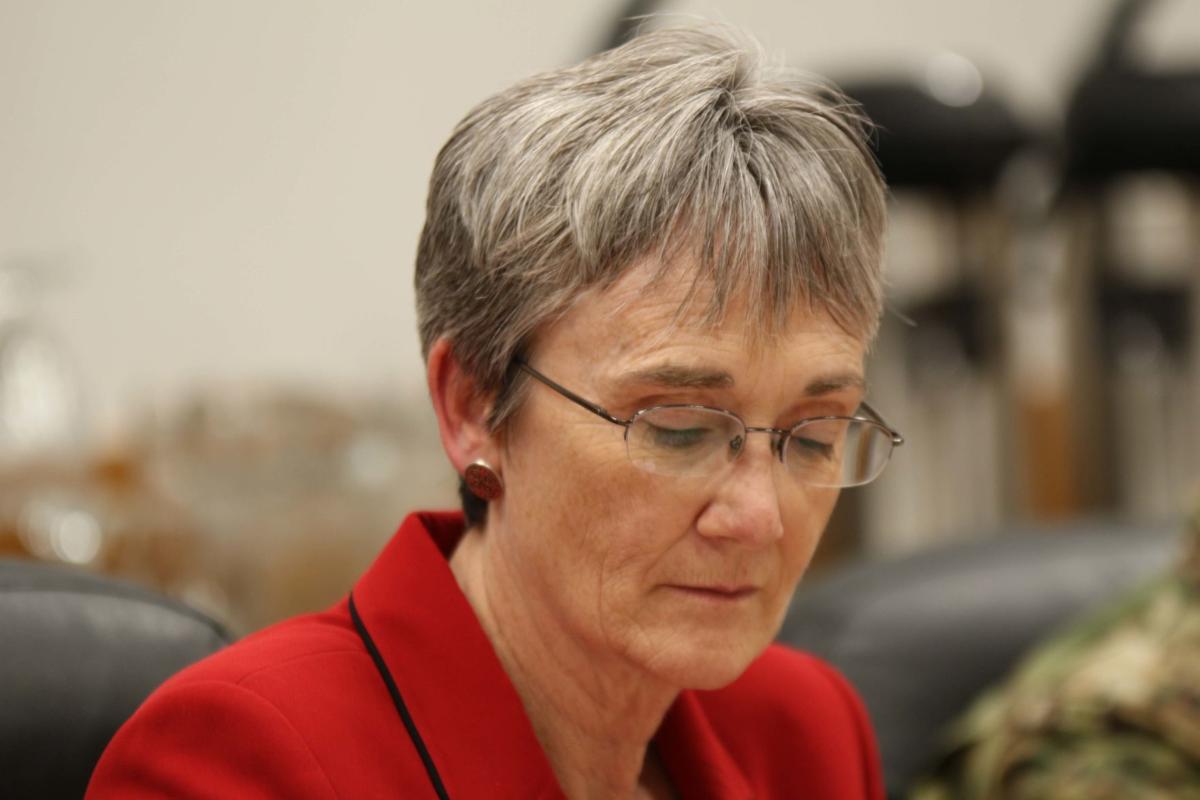 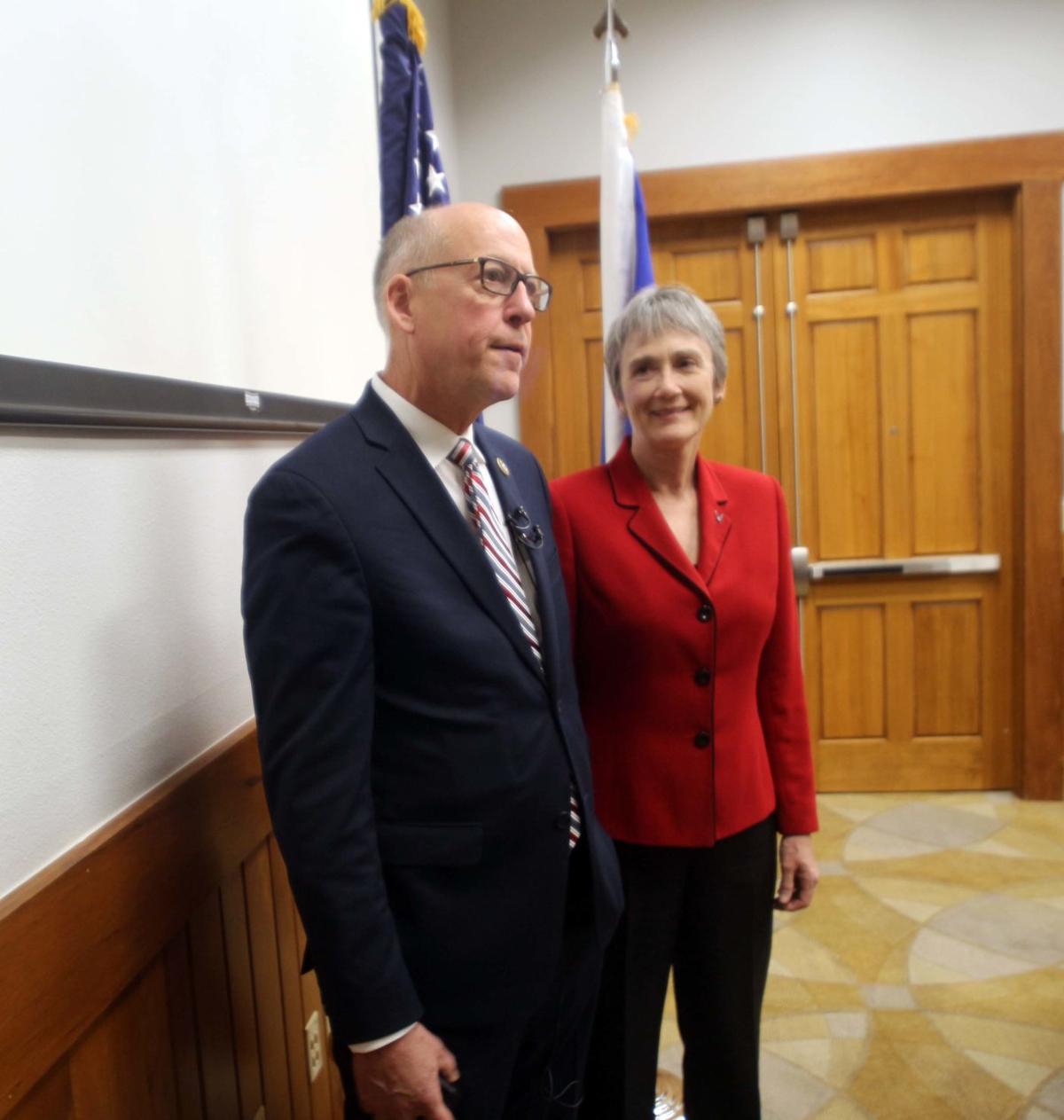 The Secretary of the Air Force paid a visit this weekend to Kingsley Field Air National Guard Base for the first time in history.

Rep. Greg Walden invited Heather Wilson, the 24th Secretary of the Air Force, to Kingsley to meet troops and commanders and scope it out as a potential site for a new fighter jet like the F-35.

As Secretary, Wilson oversees the $138 billion annual Air Force budget. She is also responsible for policy, strategy and investment in weapons and acquisition for the military branch.

Wilson served on the House Armed Services Committee, the House Permanent Select Committee on Intelligence and the House Energy and Commerce Committee as a U.S. Representative from 1998 to 2009. Wilson directed defense policy and arms control for President George H.W. Bush on his National Security Council Staff from 1989 to 1991.

On Saturday, Wilson and Walden hosted a round table discussion with local officials from Klamath County and Klamath Falls government as well as healthcare, housing and education leaders. In the hour-long meeting, they discussed various community initiatives and partnerships between Kingsley and their organizations.

“It’s been great to have the secretary here,” Walden said in a press conference after the meeting. “She got to see the incredible community support for this base and for our airmen. We’re all engaged here.”

Kingsley is the only military base which trains F-15 fighter jet pilots in America. However, the F-15 is an old jet, and Oregon Air Guard officials say it is a matter of when, not if, the jet will need to retire

When that happens, troops and commanders on the base, as well as Oregon leaders like Walden, hope national leaders like Wilson will consider Kingsley as a home for the F-35.

Access to affordable housing and health care were raised as two of the most serious issues facing Air Guard troops at Kingsley.

Wilson said these were issues that Airmen stationed all across the country faced — when you move to a new community, you have to establish new medical and housing roots and sometimes those resources are not readily available.

Wilson said she was happy to see the Klamath Falls leaders cared to address these struggles, even if a holistic solution had not yet been reached.

She also brought up the issue of reciprocity of licensure for spouses. Wilson said many spouses of stationed airmen had a hard time finding work when they moved because the licensure they need for their careers whether it’s hair-cutting or real estate credentials varied between states.

“Now is the time to clean up some of these law that prevent mobility for people,” she said.

“We have the great flight space to train, and we have a community that’s ready to step forward to provide even better health care, housing and education opportunities for the Airmen,” Walden said.

Wilson said she enjoyed her first visit to Kingsley, but the Air Force did not have any solid plans regarding placing F-35s or other fifth generation air craft just yet. She said that in January, the Air Force would give Congress a plan regarding the future and potential base placement of F-35s.

She said they are still considering what to do with aging aircraft like the F-15, and that the Air Force was dealing with a shortage of pilots.

“Really, the thing that’s driving all this is the threats we’ve returned to an era of great competition and we have to be prepared for that competition,” she said.