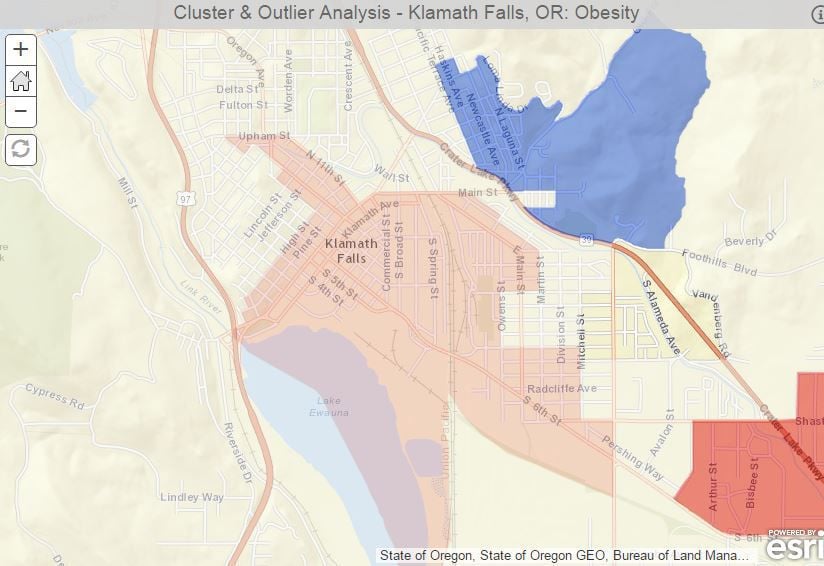 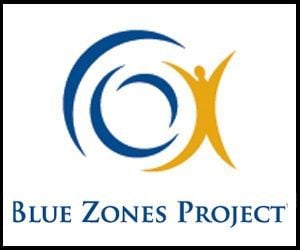 A professor at the Oregon Institute of Technology has developed a mapping system to identify health patterns in Klamath Falls.

As part of the Blue Zones Project initiative, John Ritter, a professor of Geomatics at OIT and Director of the G.I.S Center, has been working in conjunction with the Sky Lakes Wellness Center to decipher which areas of Klamath Falls have increased rates of disease and health issues.

In 2013, Medical Director of Sky Lakes Wellness Center Stephanie Van Dyke and Program Director Katherine Jochim Pope received a $104,000 grant from the Cambia Health Foundation for a mapping project to look at geographical health outcomes. They approached Ritter for help with the maps. He “took the information and ran with it,” Pope said.

Van Dyke and Pope donated a portion of the grant to the Geomatics department.

Using a geographic information system designed to capture, store, manipulate, analyze, manage and present spatial or geographical data, a 2010 census report and 60,000 unidentified medical records on diabetes and obesity from 2012, Ritter said he plotted the results on a map to decipher where the people with health issues in Klamath Falls live.

He had two goals: To determine if disease incidents were related to local walk-ability and/or demographics, and to see if spatial analysis could help in directing resources for intervention efforts.

Ritter found that diabetes and obesity rates were higher in the south central area of Klamath Falls, along Summers Lane, and also from downtown to Oregon Avenue.

This year, Klamath County was ranked the thirty-fifth healthiest county in Oregon, out of 36, according to County Health Rankings and Roadmaps.

“We’re not in real great shape in terms of health,” Ritter said.

The initial phase of the project was conducted in 2013 by Brandon Coble, a G.I.S. student in OIT’s Geomatics department, to fulfill his senior project requirement.

Coble put together a model of the walkability of local streets based on the steepness of the terrain, zoning, the proximity to public points of interest, population density, road density, housing density and speed limits.

The project took Coble, 34, about four months to complete.

“I liked the ability of G.I.S systems to create a visual that helps predictive analysis,” Coble said. “There are lots of places it could be implemented more so.”

After mapping the spatial distribution of diseases, Ritter used regression analysis to combine Coble’s findings with area demographics from the Census to determine the relationship between the presence or absence of disease in Klamath Falls with the local walkability, demographics and other diseases.

“I combined it to make one ‘ginormous’ data set to see if any of it is correlated to hypertension, diabetes and cholesterol,” Ritter said. “I have used all the data over the last couple years.”

Pope says Ritter’s maps identified an unhealthy “pocket” on Oregon Avenue, which led to the sustainable intervention plan of a protected bike lane from Moore Park to the downtown area, which would impact the overall health of the community and the town’s economy.

The bulk of the funding SkyLakes Wellness Center received in 2013 went toward hiring professionals to design the bike lane. Pope hopes that construction can begin in 2017 if the project is approved by City Council, she said.

Ritter’s findings also contributed to the City Council’s approval of the “Urban Trails Master Plan,” which will provide residents of Klamath Falls with more direct access to physical activity opportunities.

“That’s the beauty of this thing,” Ritter said. “G.I.S brought to light an understanding of the situation that we otherwise wouldn’t know [about].”

Ritter said he hopes his findings can focus remediation efforts on areas of town that are impacted with disease, instead of spending money on the entire city or places where people are healthy.

Ritter encourages students at OIT to enroll in the new Population Health Management degree program that puts research on the social determinants of health into practice. Students can also elect to take G.I.S classes.

“There is food for more study,” Ritter said. “It’s beneficial for the city to understand the situation.”

Ritter, Van Dyke and Pope are the first people in the nation to use G.I.S in conjunction with the Blue Zones initiative, which is becoming more prominent in Klamath Falls, Ritter said.

A comparison of hot spot analyses of de-identified patient data for hypertension, cholesterol, diabetes and obesity in the area of Klamath Falls can be viewed online at http://arcg.is/2eHFAvK