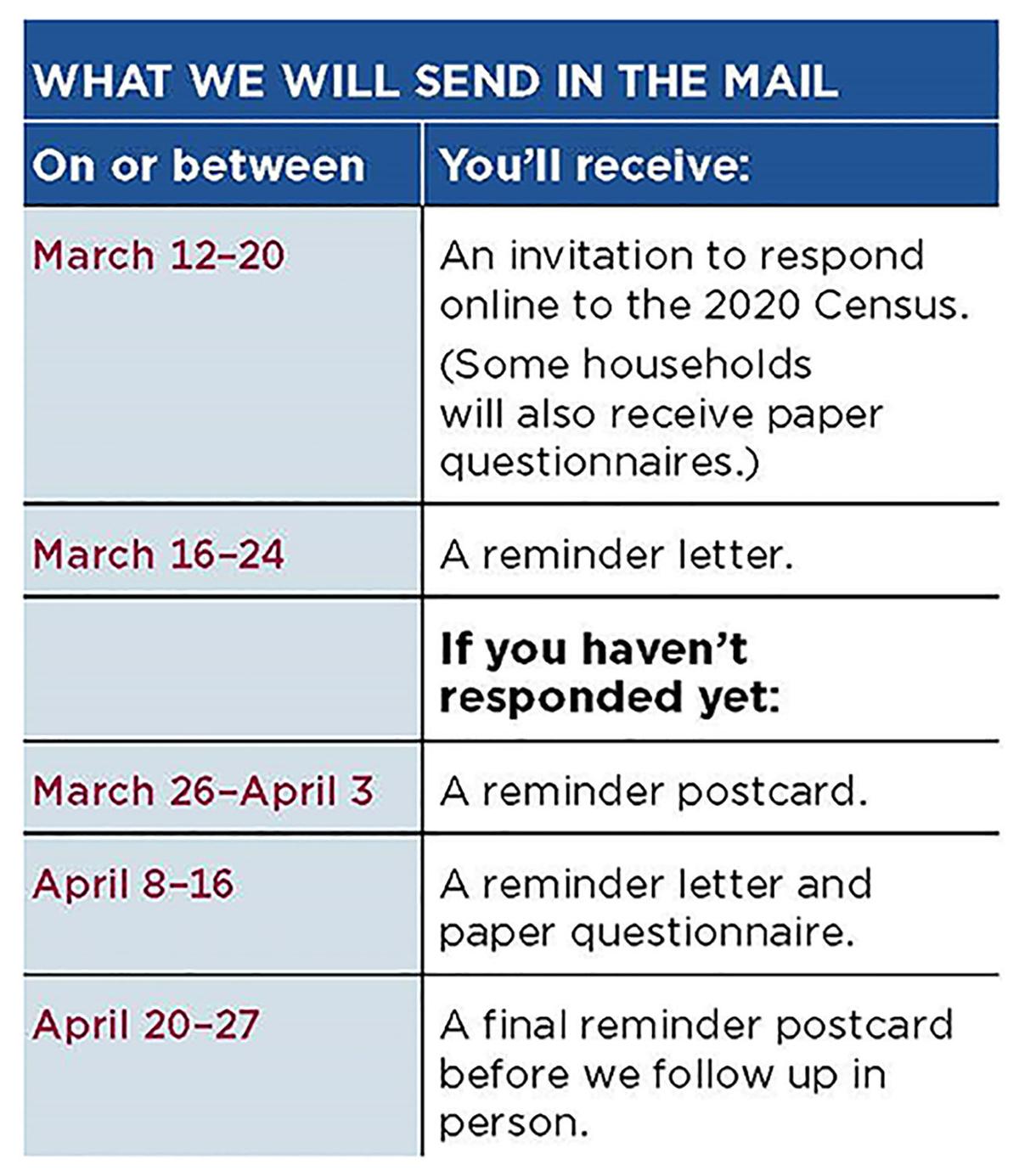 This table provided by the U.S. Census Bureau shows the mailing schedule for the bureau's census outreach to households. 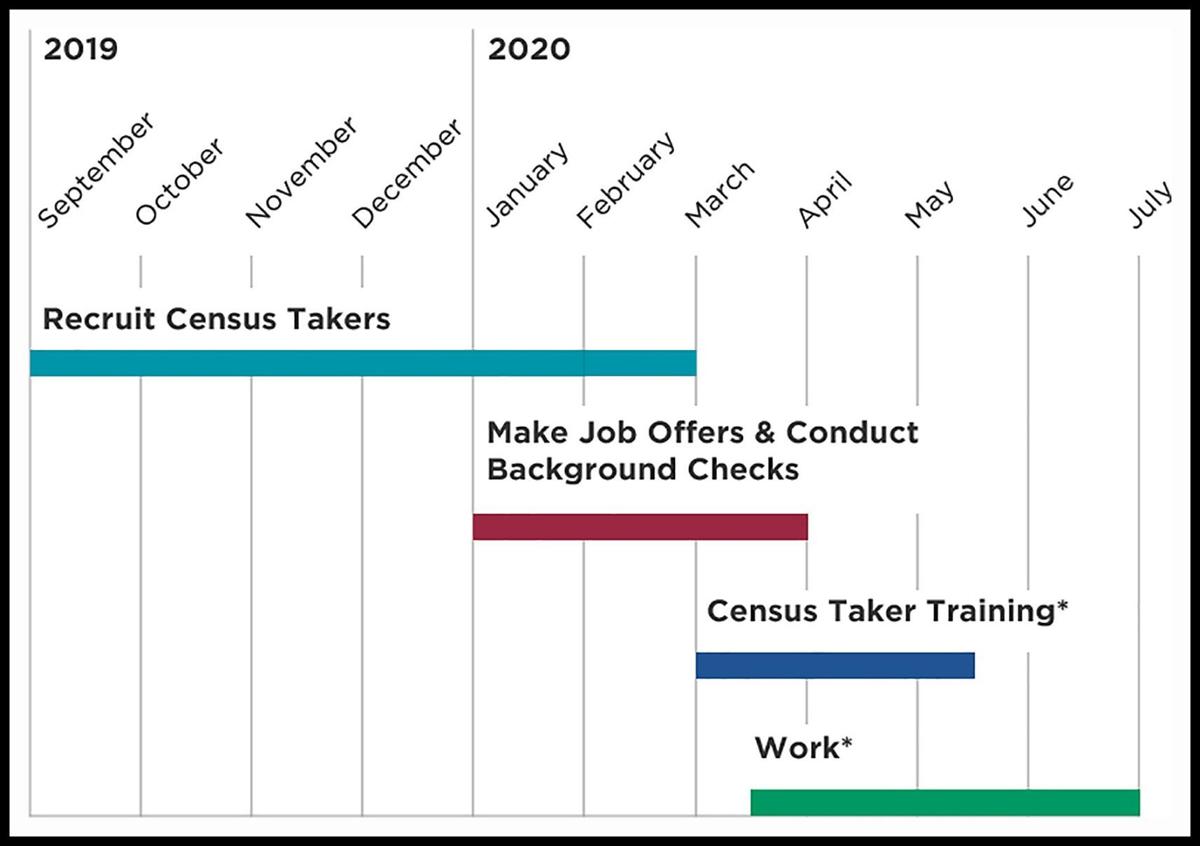 This timeline, above, shows when recruiting, hiring, training and work will occur for the 2020 census.

The table at left, provided by the U.S. Census Bureau, shows the mailing schedule for the bureau’s census outreach to households.

This table provided by the U.S. Census Bureau shows the mailing schedule for the bureau's census outreach to households.

This timeline, above, shows when recruiting, hiring, training and work will occur for the 2020 census.

The table at left, provided by the U.S. Census Bureau, shows the mailing schedule for the bureau’s census outreach to households.

Klamath County is still in a need of an additional 250 applicants to fill temporary jobs for the 2020 U.S. Census, according to Misty Slater, media specialist with the U.S. Census Bureau. Applying may be easier than ever this year because 2020 marks the first census year in which people seeking census field positions can apply online. It’s also the first year that census takers can complete some of their training online.

“Moving the application process online eliminates a lot of paper and makes it much more efficient — for both the applicant and the Census Bureau,” Slater explained. The bureau will be actively recruiting until the end of February, she said, but noted that people can still apply after that at 2020census.gov/jobs.

“The census asks questions of people in homes and group living situations, including how many people live or stay in each home, and the sex, age and race of each person,” the U.S. Census Bureau explains on its website. Federal funds, grants and other forms of support to states, counties and communities are based on the data collected during the census, so obtaining an accurate count in every community can benefit the people living there.

The census also determines how seats in the U.S. House of Representatives are apportioned. An uptick in a state’s population can lead to it gaining one or more congressional seats, as is predicted for Oregon following the 2020 census.

Oregon Public Broadcasting reported in December that recent estimates show Oregon grew by 0.9% between July 2018 and July 2019, to a total of 4,217,737. “Oregon came close to gaining a sixth congressional seat in 2010, and the state’s growth since then has far outpaced the nation. Adding another congressional seat would give Oregon more clout in the U.S. House and make it marginally more important in presidential races – having a total of eight electoral votes instead of seven,” OPB detailed.

Slater reported that as of Friday, Feb. 7, 40 census workers had been hired from Klamath County. “We extend job offers for field positions approximately 60 days prior to training for each field operation. Most job offers will be made between January and April 2020,” she detailed.

While the closest area census office is in Eugene, census workers need not worry about traveling far to learn the ins and outs of the job, because trainings will be set up locally, Slater said. “Paid training will be conducted between March and mid-May. From May through July, census takers will help collect responses from households that have not yet responded to the census,” she added.

Census field employees will be reimbursed for authorized work expenses such as mileage incurred while conducting census work, Slater mentioned. Temporary 2020 Census employees are paid weekly through direct deposit or a paycheck in the mail. They can expect to receive their first paycheck 10 to 14 days after their first day of work and will receive subsequent paychecks every seven days.

Being a census worker offers a chance to make decent money without having to make a long-term commitment. Census takers in Klamath County make $16 an hour — nearly $5 an hour over Oregon’s minimum wage. “On average, a Census Taker in Klamath County, working 25 hours a week, can make $3,200 in an eight-week period,” Slater said.

The census aims to count everyone once, only once, and in the right place. To do this, the U.S. Census Bureau has developed a plan to best account for what it calls “hard to count populations.”

Many people are included in the “hard to count” category, which the census bureau website says consists of young children, people who move often, racial and ethnic minorities, non-English speakers, low income individuals, people experiencing homelessness, undocumented immigrants, people who distrust the government, members of the LGBTQ population, people with mental or physical disabilities, and those who don’t live in traditional housing.

One of the hardest to count populations is the first population the census reaches. The 2020 census’s first enumeration began in Toksook Bay, Alaska, on Jan. 21, Slater noted. "We know we can only reach the population living there when the tundra is frozen and people are reachable in their villages. We also work in partnership with village elders to identify and hire enumerators who speak the local language and can translate and facilitate the collection of census response data,” the 2020 Census website describes.

This year, the U.S. Census Bureau will devote three days to counting people who are experiencing homelessness across the country, with checks in place to ensure that people aren’t counted more than once. “These days follow months of outreach and coordination with local census offices, partners, shelter directors, service providers, and others,” the census website notes.

March 30 will be focused on counting people living in shelters, March 31 will focus on counting people at soup kitchens and mobile food vans, and April 1 will see a count people in “non-sheltered, outdoor locations, such as tent encampments and on the streets.”

Most people currently employed as census workers hold the title of “recruiting assistant.” “Recruiting Assistants help in recruiting new applicants to staff our peak operations,” Slater said. Next, “census takers” will be hired to work in their own communities and go door-to-door to collect responses from people who did not respond to the 2020 Census online, by phone or by mail.

The rest of the nation will begin receiving invitations to respond to the 2020 Census in mid-March. “Responding to the census is easy, safe, and secure,” Slater assures citizens. She detailed the process for responding, noting that there are three ways do so: online, by phone, and by mail.

Slater explained, “By April 1, you will receive an invitation to participate in the 2020 Census. Once the invitation arrives, you should respond for your home Starting in May 2020, the Census Bureau will begin following up in-person with homes that have not responded to the census.”

She emphasized, “The results of the 2020 Census help determine how more than $675 billion in federal funding are spent locally for schools, hospitals, roads, and more.”