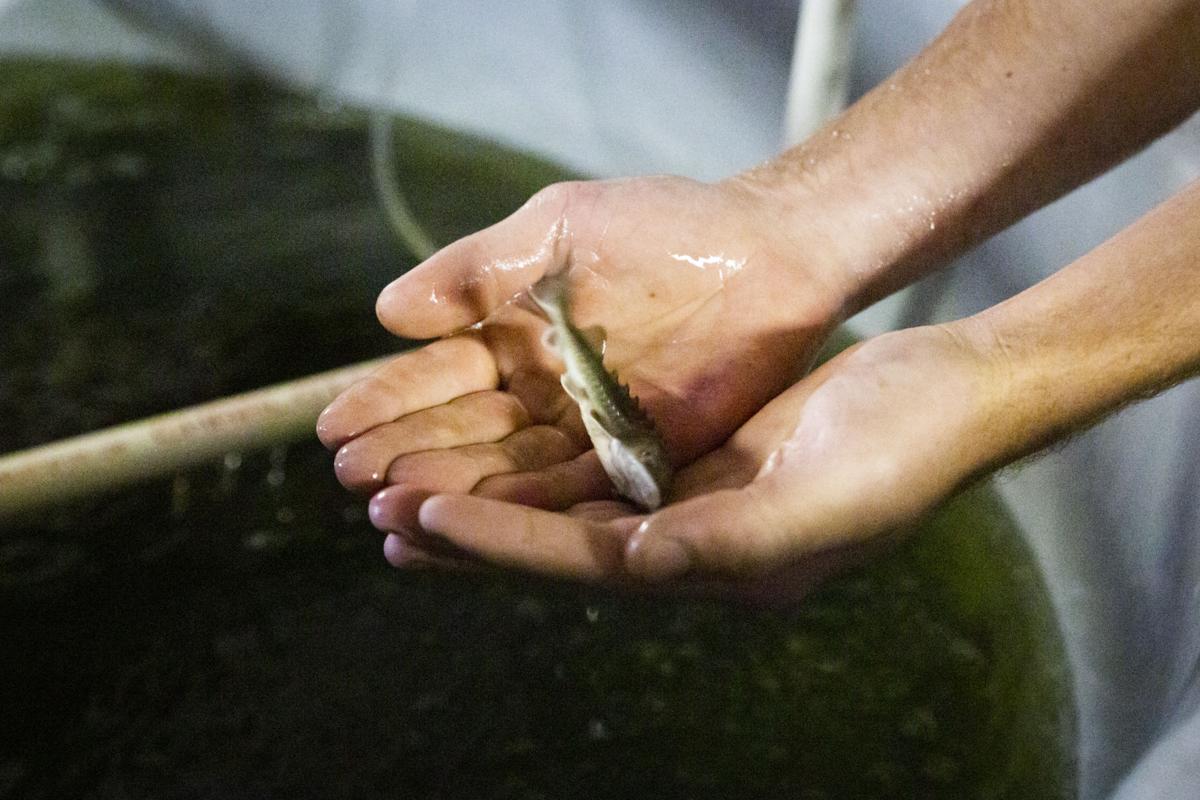 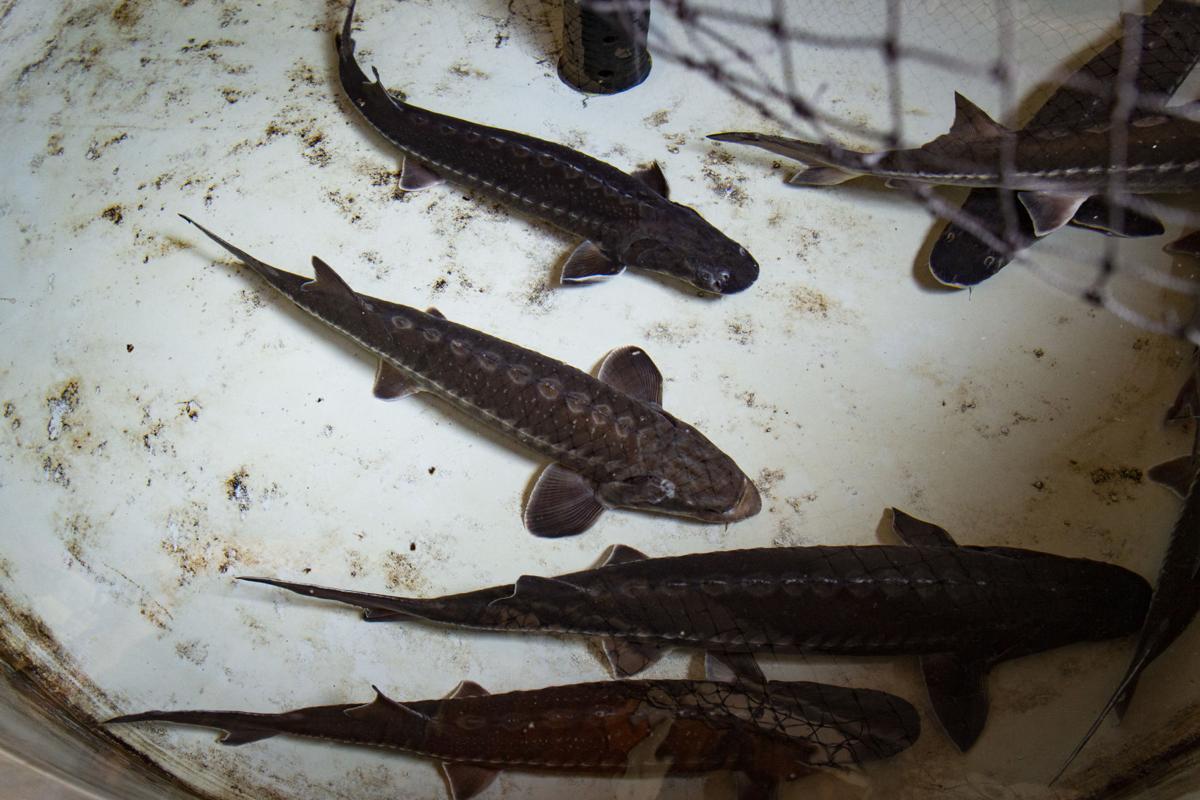 Sturgeon swim in a tank at the Oregon Royal Sturgeon Company facility. 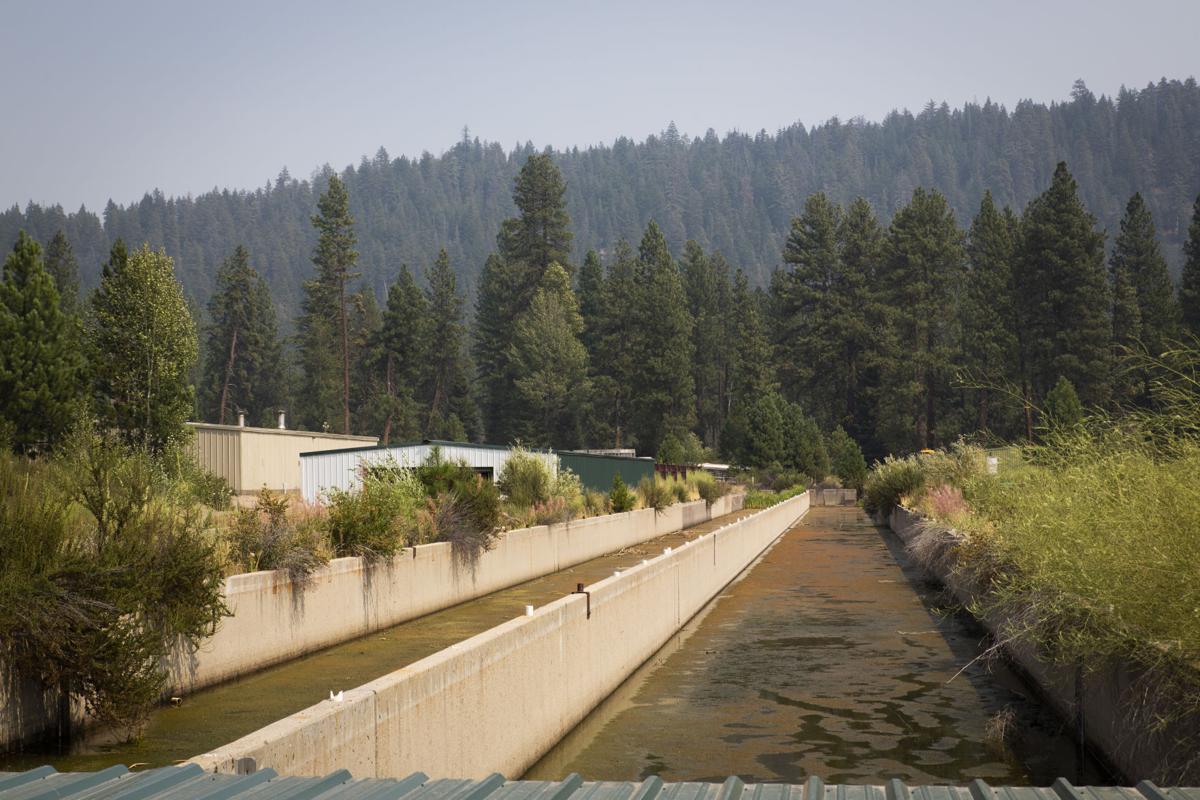 The Oregon Royal Sturgeon Company facility is located in a former salmon hatchery. 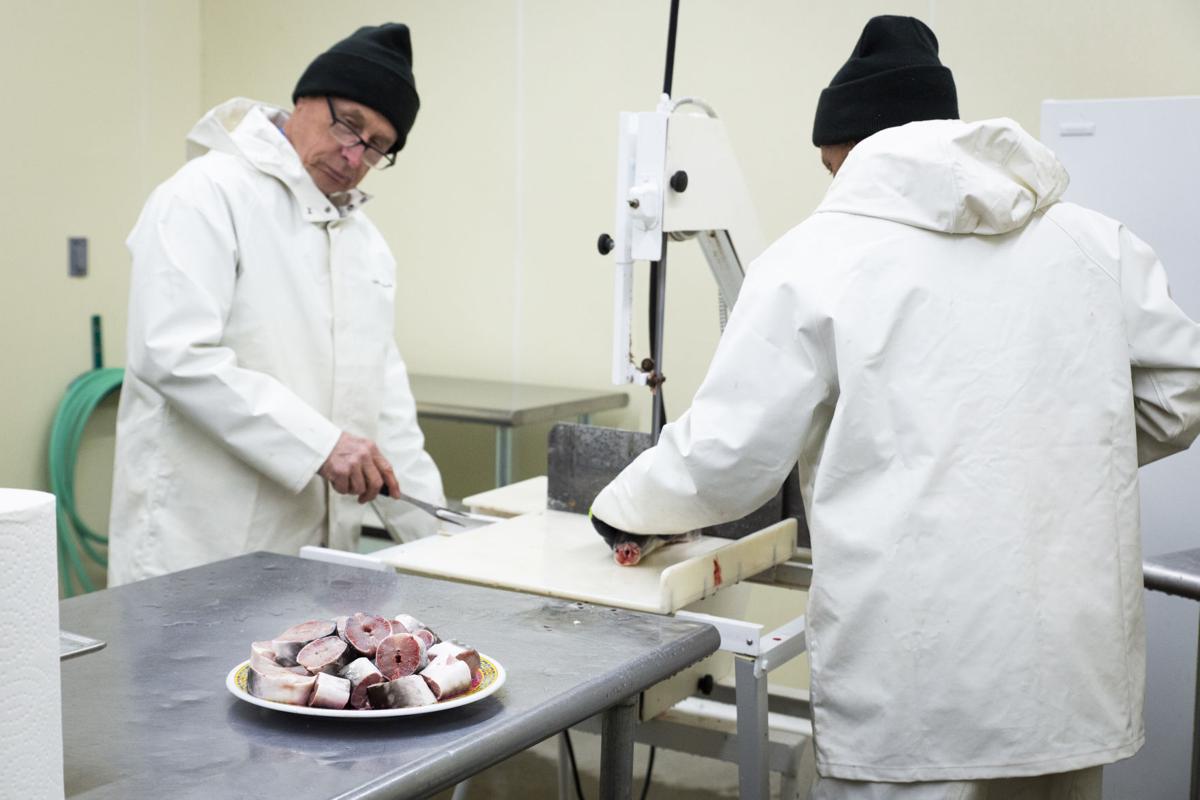 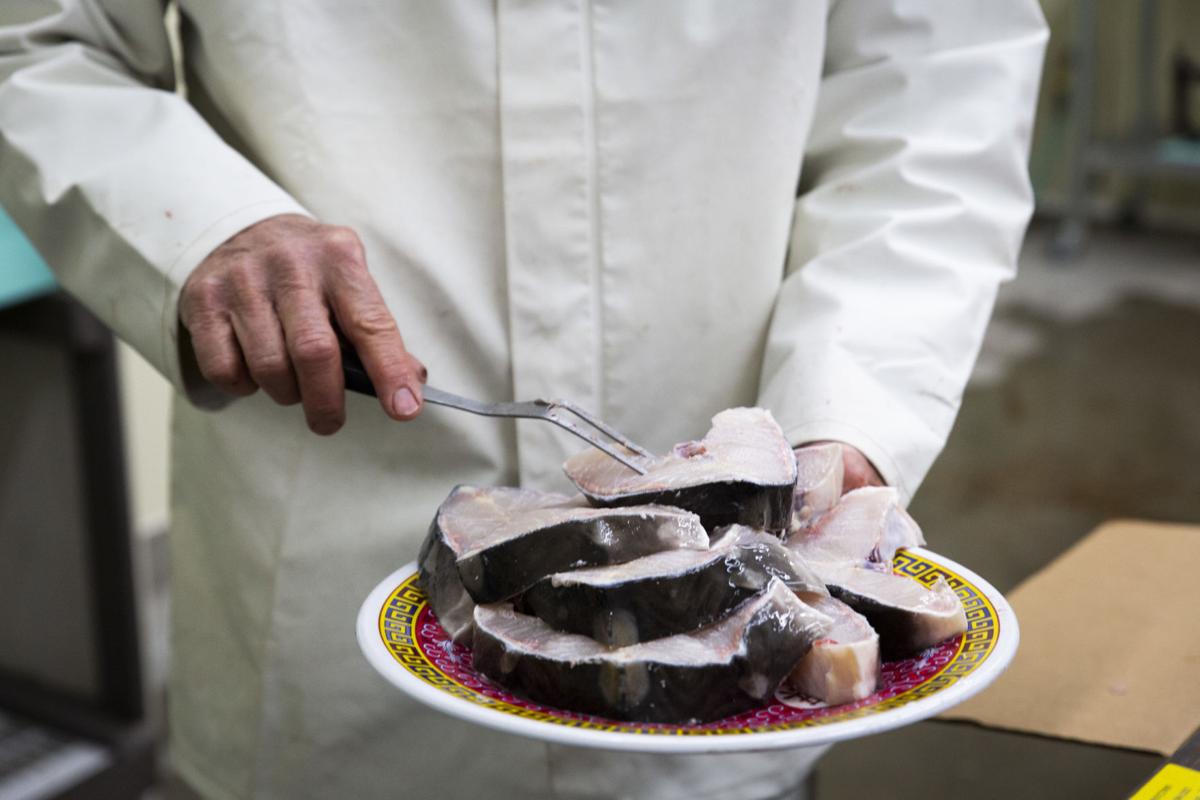 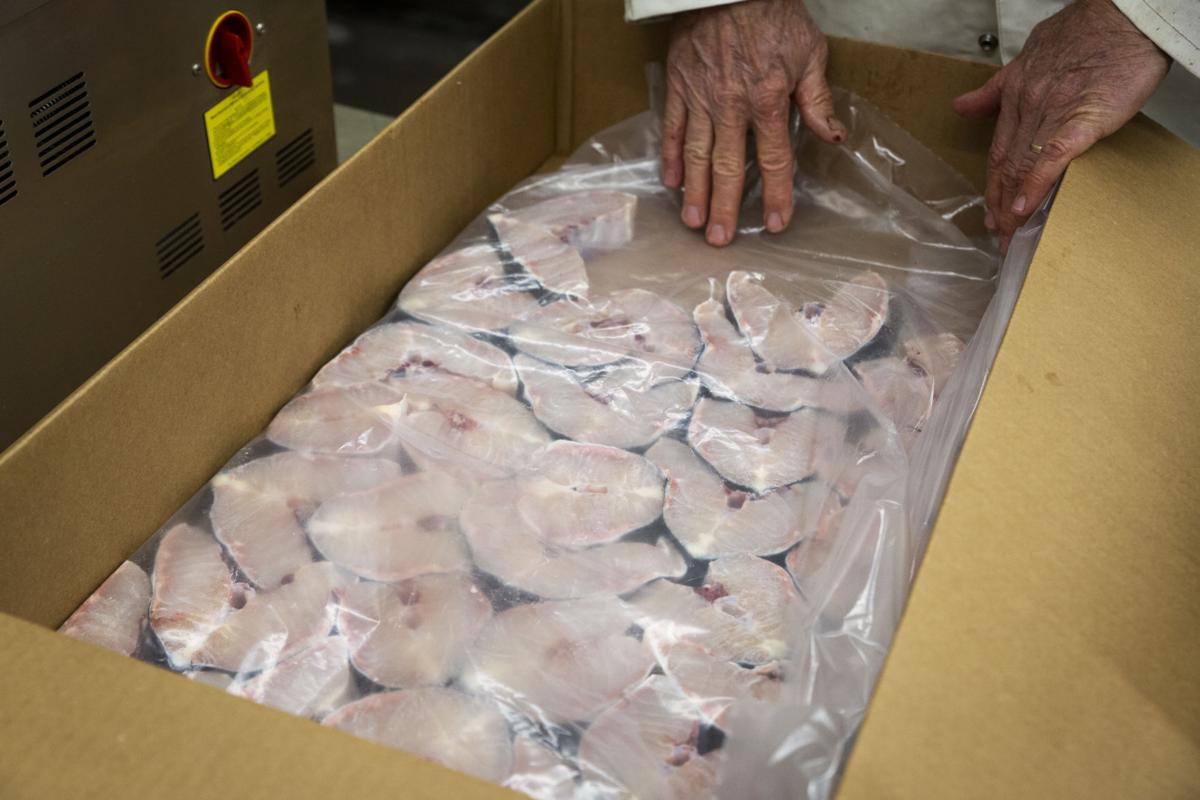 Owner Darryl Goodson shows cuts of sturgeon steaks set to be sent to a local restaurant. 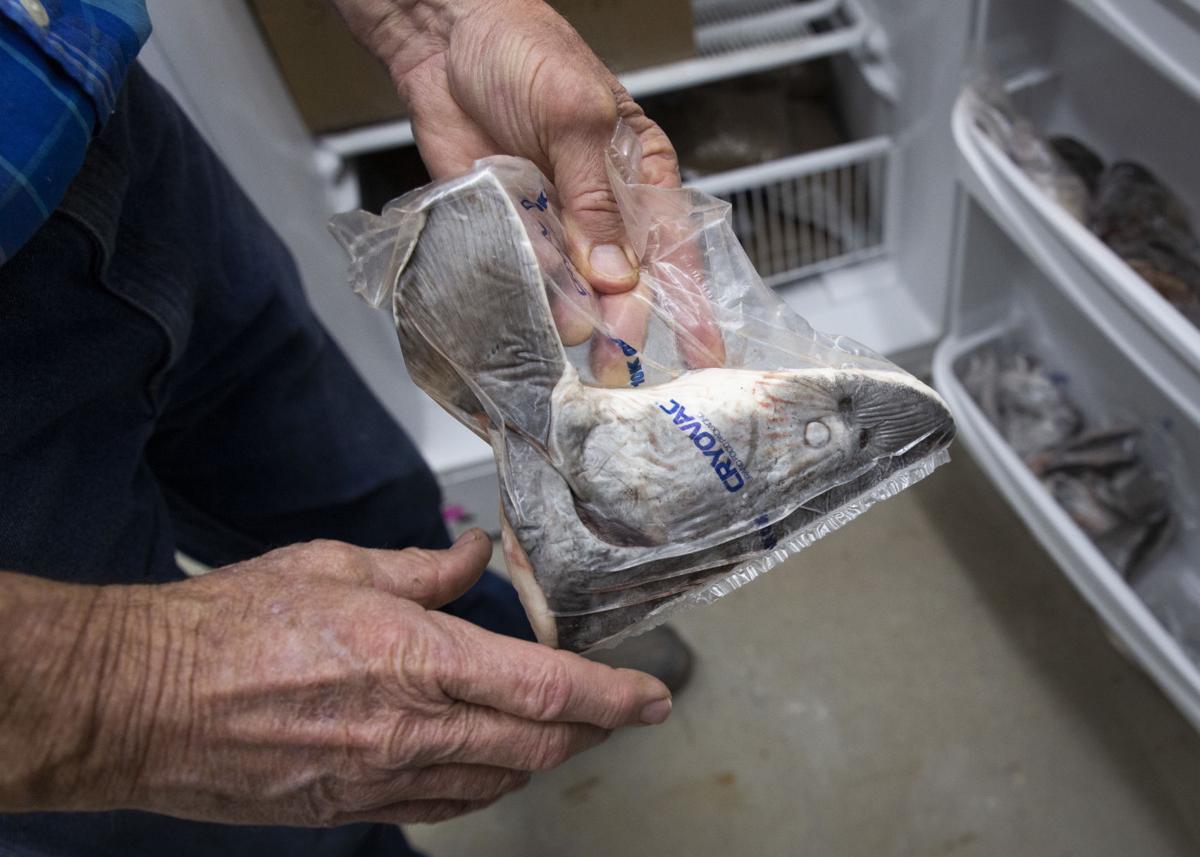 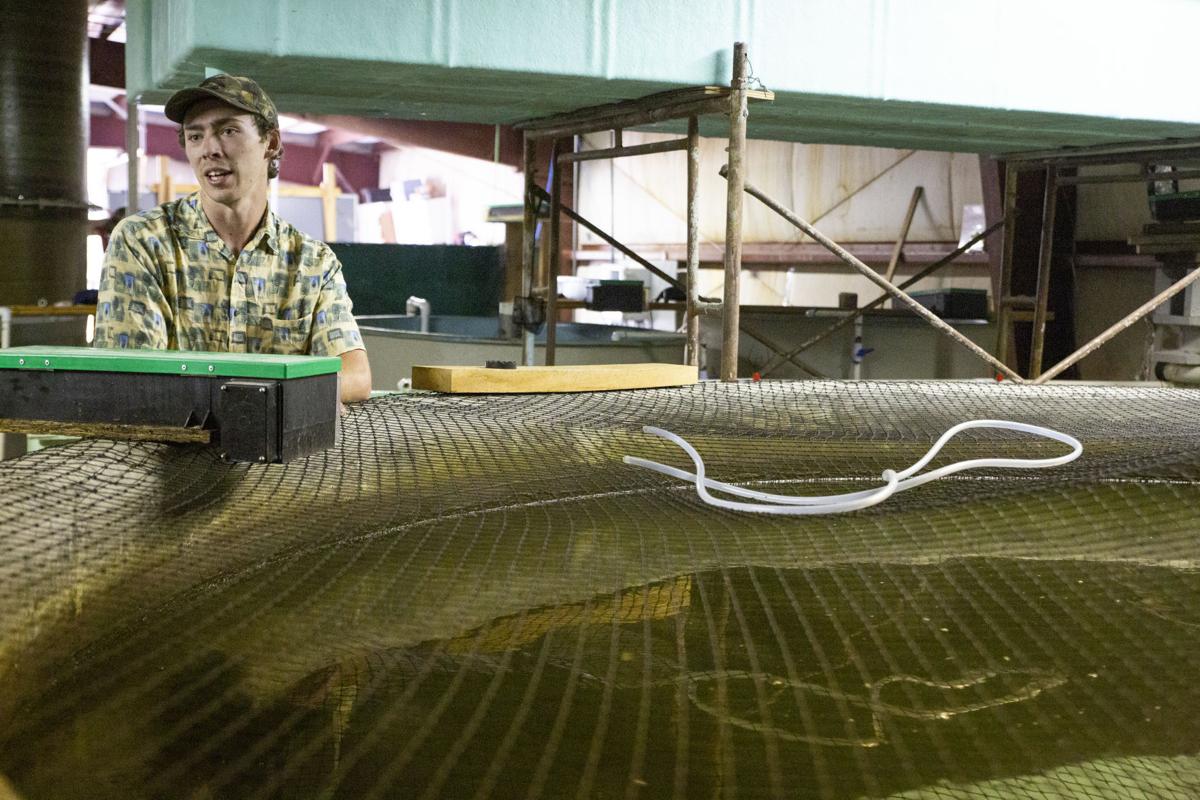 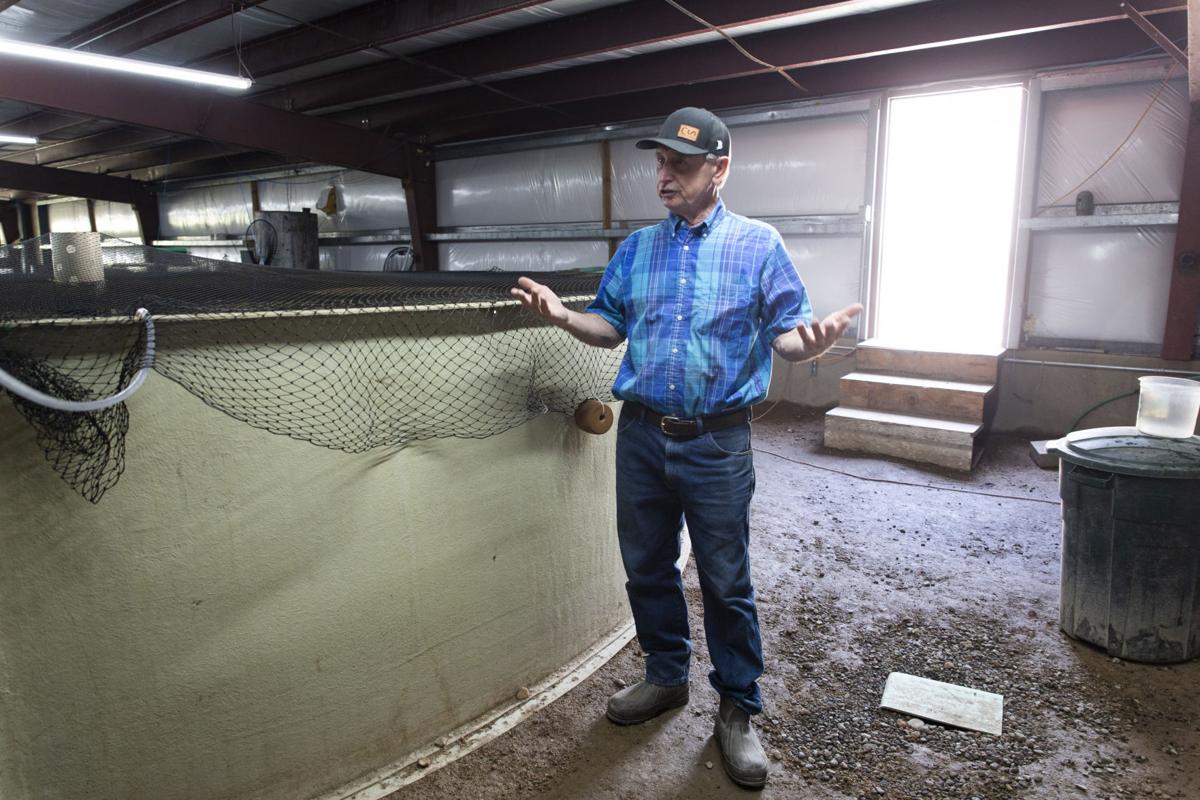 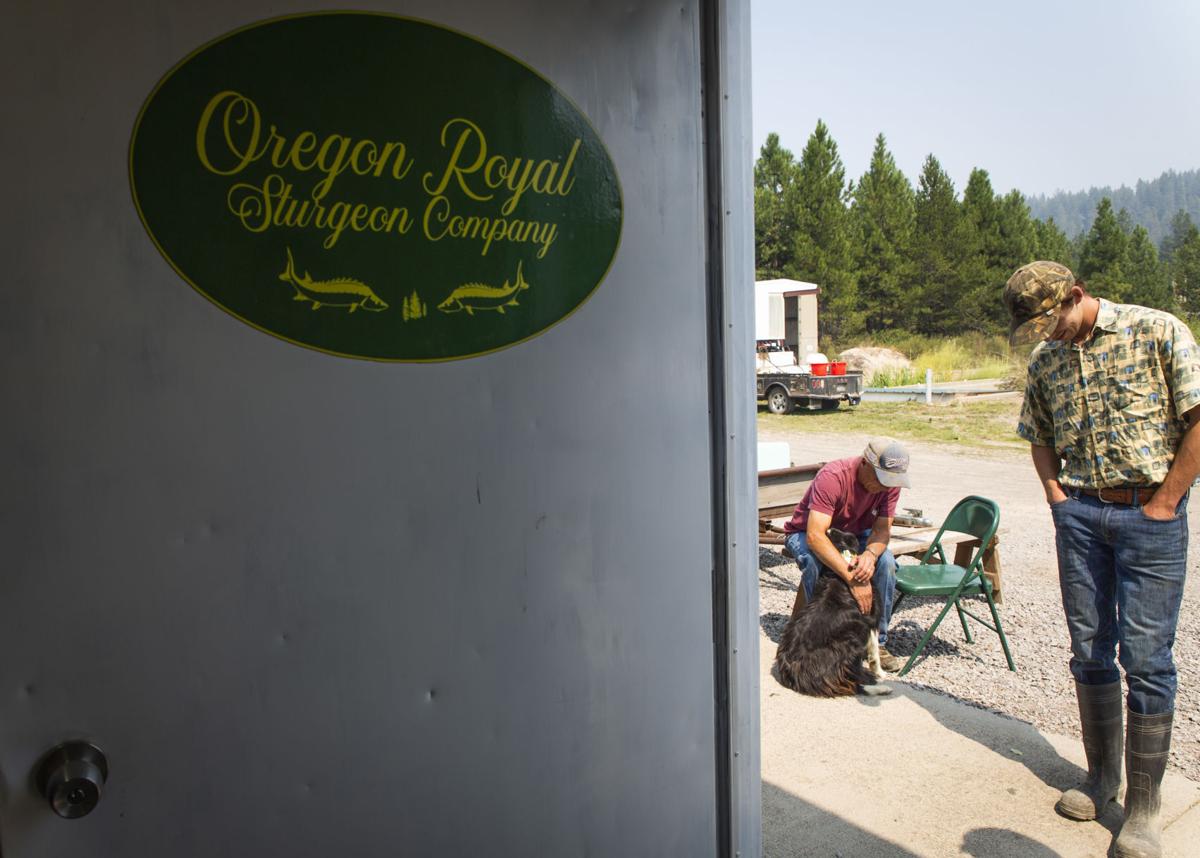 Richie Lockrem pets his dog, Millie, as he and hatchery manager Matt Wolder stand outside part of the processing area at the Oregon Royal Sturgeon Company facility on Aug. 17, 2021.

Tired of seeing surveys on articles? If you are a subscriber, simply log in or Subscribe now!
1 of 5

The Oregon Royal Sturgeon Company facility is located in a former salmon hatchery.

Owner Darryl Goodson shows cuts of sturgeon steaks set to be sent to a local restaurant.

But North America’s largest freshwater fish also makes for good eating and a private Klamath County hatchery has been raising the delectable dinosaurs for commercial consumption over the past few years.

Armed now with all the appropriate fish processing licenses and sturgeon large enough to harvest, the Oregon Royal Sturgeon Company began to sell and ship out its first cuts of the fish this summer, said Darryl Goodson, the company’s owner.

The Fort Klamath hatchery is only the place in Oregon licensed by the FDA and the Oregon Department of Agriculture to raise and process sturgeon.

The company’s goal is to not waste a single inch of the fish — which are all raised in a state-of-the-art, closed water system that is separate from the local watershed, Goodson said.

Neighbors of the hatchery have already purchased cuts of the fish, the company’s website — OregonRoyalSturgeon Company.com — offers the products and shipping. Some Southern Oregon restaurants have already ordered. Others, like Klamath Falls’ Fable PNW restaurant, are in talks to potentially secure some of the local sturgeon meat — which has a texture similar to swordfish, marlin or even chicken breast — for their menu.

“It’s just a good product,” Goodson said. “If you’ve got something that’s good, you know, you’ll figure out where it’ll go.”

Why sturgeon? Why Fort Klamath?The Oregon Royal Sturgeon Company is actually on the property of a defunct salmon hatchery built in the 1980s by Anadromous Inc. near Fort Creek and eventually shuttered by 1991. The hatchery was largely left to the wilds until Goodson, a retired engineer, purchased it along with the rest of his Fort Klamath Ranch.

Goodson said he mulled over what to do with the old hatchery buildings and vacant raceways and eventually decided that a fish farm ought to stay a fish farm. He told the Herald and News in 2015 that he planned to raise salmon that could eventually be reintroduced to the Klamath River.

Standing in front of circular tanks containing thousands of sturgeon on Tuesday, Goodson said that upon further investigation he decided that the old hatchery system — which diverted 45-degree water off the spring which feeds Fort Creek — might not be the best idea.

“(Salmon) don’t grow good at 45 degrees,” Goodson said. “When this hatchery was here, and they were trying to grow salmon, they ended up having to heat the water in the wintertime, just to grow them and salmon don’t do that well.”

Sturgeon on the other hand, which have likely existed as a species for hundreds of millions of years and generate what is essentially armor plating when they’re only a few inches long, can survive in wide temperature variations.

“Once they get about five to six inches,” Goodson said. “They’re almost indestructible. They just don’t die.”

Evidence of the sturgeon’s longevity has also been observed locally.

In the late 1950s, the Oregon Department of Fish and Wildlife planted about 220 non-native white sturgeon in Upper Klamath Lake. There’s been little evidence that they’ve been able to reproduce, but extremely large and likely quite old sturgeon have been found over the years, previous newspaper reports show.

In 2017, the carcass of a 250-pound female white sturgeon measuring over nine feet long was found at Keno Dam. The year prior, Bureau of Reclamation technicians accidentally netted an estimated 300-400 pound sturgeon in Lake Ewauna before freeing it from the net.

According to a Herald and News report from the time, members of the Bill Graham family literally lassoed a 9-foot-long, 410-pound sturgeon out of the D Canal near Malin in 1994.

How to raise white sturgeon

“They’re just like regular kids. They take most of my attention when they’re first starting off,” said Matt Wolder, hatchery manager and a self-proclaimed “sturgeon dad.”

Sturgeon, called “fry” in their infancy, are currently shipped into the hatchery and are released in a rectangular tank where they initially need constant attention, Wolder explained. For the first few hours, they live off the energy stored in their “gut sacks” but once that’s depleted, the young immediately need food. Without it, their stomachs shrivel and the fry die.

The sturgeon in the company’s tanks come from a line of the fish which was first domesticated down at UC-Davis in the 1980s, Goodson said.

Once they put on a few inches, the fish move into a series of circular tanks — each holding hundreds of fish — where they’ll spend their entire lives. Oxygenated, on-site murky pond water flows into each tank and auto feeders provide food gradually.

The shape of the tanks is important and a big reason why the process is cutting edge, Goodson, the engineer, said. Water pushed into the circular tanks naturally flows in a whirlpool motion which actively cleans the tank of excrement. A drain at the center constantly draws the old water out.

All of the water in the system is precipitation collected in a lined, on-site pond, Goodson said. That water is pumped high into the air in another storage vessel and then travels through the system of pipes to a room where more oxygen is injected and then to the tanks via gravity. Old water leaves the tanks, gets filtered and returns to the pond.

Similar-sized fish are kept together so they don’t out-compete each other for food, Wolder said. As the sturgeon grow larger, they graduate to another circular tank. Eventually over the course of three to four years, they reach harvest size — about 8-10 pounds.

For about their final three weeks, ready-for-harvest sturgeon are placed into 44-degree, clear water to let the fish flush themselves out and clear them of the taste of the murky pond water. The cool water simulates winter for the fish where it doesn’t eat and moves as little as possible to preserve energy, Goodson said.

A separate group of sturgeon are being allowed to grow larger so that they live to mating age. Females can take a seven to eight years to reach that stage, Wolder said. Eventually, the plan is for the hatchery to produce its own fry but also thousands of eggs — otherwise known as caviar.

“That’s down the road,” Goodson said. “We’re gonna throw a big party when we sell our first caviar.”

From tank to plate

When it comes to harvesting, the goal is to make sure the fish on restaurant menus is fresh, Goodson said. Sturgeon showing up on local plates were likely swimming just days prior.

When the fish are ready for harvest, they’re knocked out and bled in an icey slush. From the slush they head to the gut room where they’re hung from the ceiling.

“The belly of fish is often some of your most tasty meat,” Goodson said.

The belly flap is removed and will later be smoked — a product coming soon to the company’s website, Goodson said. The meatier sections are cut into steaks and brochettes. The liver is removed and also put up for sale.

Like sharks, sturgeon have a skeleton made of cartilage.

“Once you harvest it and you put it on ice, that cartilage in the rib cage almost begins to dissolve,” Goodson said. “So by the time you get to those steaks that we saw in there, there’s no bones. It’s the darndest thing.”

The tailfin and notochord — basically the sturgeon’s spine — is pulled out. The bone marrow within the chord, which has the consistency of “gummy bears,” is actually used in holiday dishes in the Russian community, Goodson said.

Called vesiga, the marrow is traditionally incorporated into a large puff pastry dish called coulibiac. The pastry is filled with veggies, fish and vesiga. Vesiga was also somewhat famously incorporated into Consomme Olga — a soup which was featured in the final meal first-class passengers aboard the Titanic ate just before tragedy.

The fins and heads are available for soups, Goodson said. All the guts not desirable for eating is mixed with molasses and sawdust. The enzymes in the fish’s digestive system survive the harvesting process and over time will turn the molasses, guts and sawdust into fertilizer.

“We’ve got all kinds of pasture out here that we’re trying to re-establish that we’re testing it on,” Goodson said. “But we do know that fish fertilizer is very popular in the marijuana industry right now.”

Like with many fish, a capable chef can do a lot with sturgeon meat. Goodson said they brought down a retired Bend chef to cook for a “chef’s table” event for friends, family and those who have helped the company. The chef turned the meat into a delicious ceviche.

State agencies lended a lot of help when it came to being properly set up and licenced, Goodson said.

“They really get props, because if we would have never got here, if any of them had said, ‘Hey, you know, you guys don’t deserve our time,’” Goodson said.

The company essentially maintains just three employees — Goodson, Wolder and “jack-of-all-trades” Richie Lockrem. If a good idea arises, Goodson said he can design it, Lockrem can build it and Wolder can manage it.

Committed passion and drive for the health and quality of the fish is must for all involved, Wolder said. Someone has to be on site 24/7 because of the possibility that the tank system — which has automatic alarms — is working properly and the fish are surviving.

During last year’s 242 Fire, the hatchery actually lost power for four days and employees had live out of pick-ups on site to keep generators — which power the company’s water treatment process — going to keep the fish alive.

“You need to be fully engaged in it, you need to enjoy the challenge,” Goodson said. “And that doesn’t mean everyday is fun.”