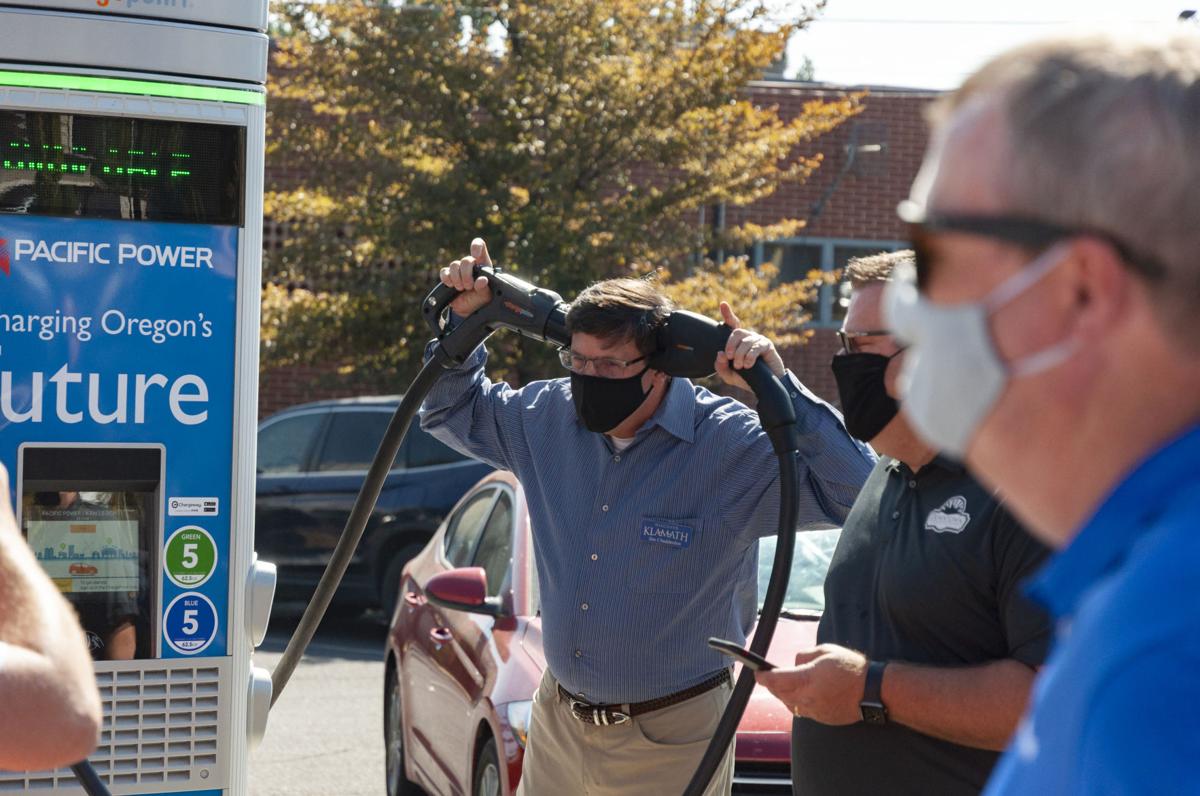 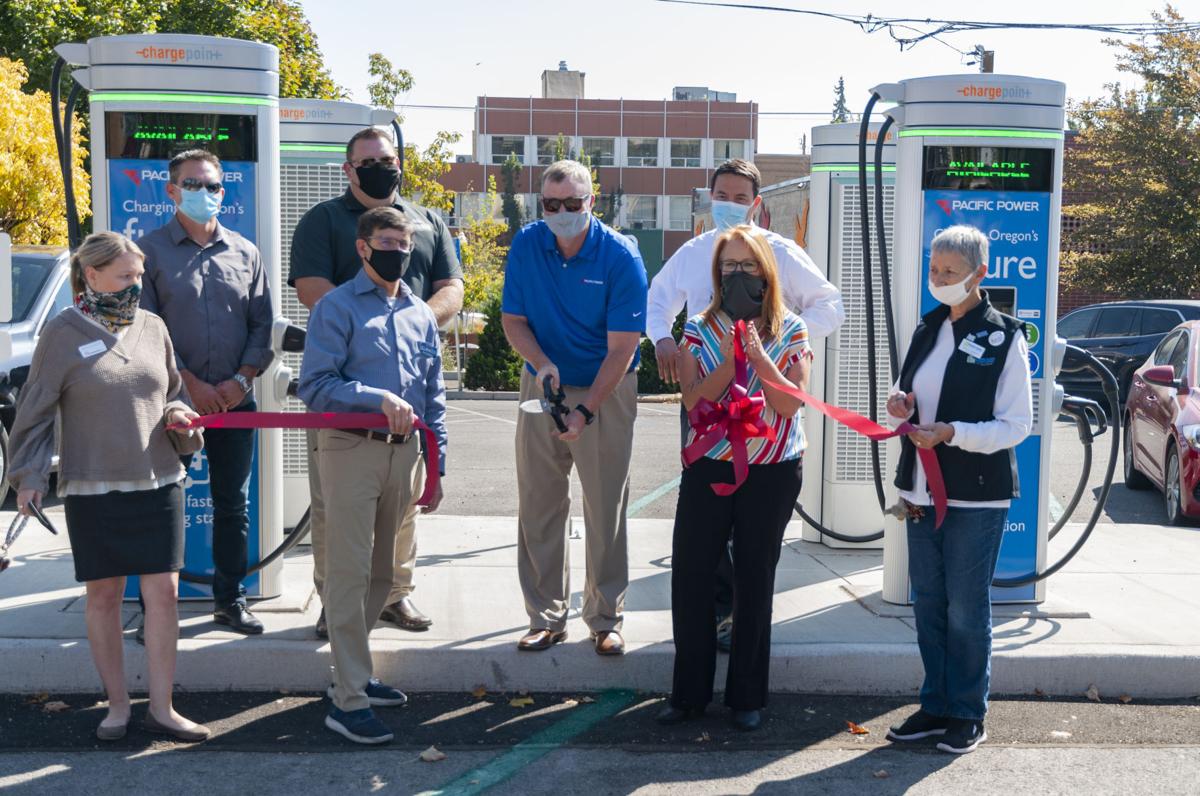 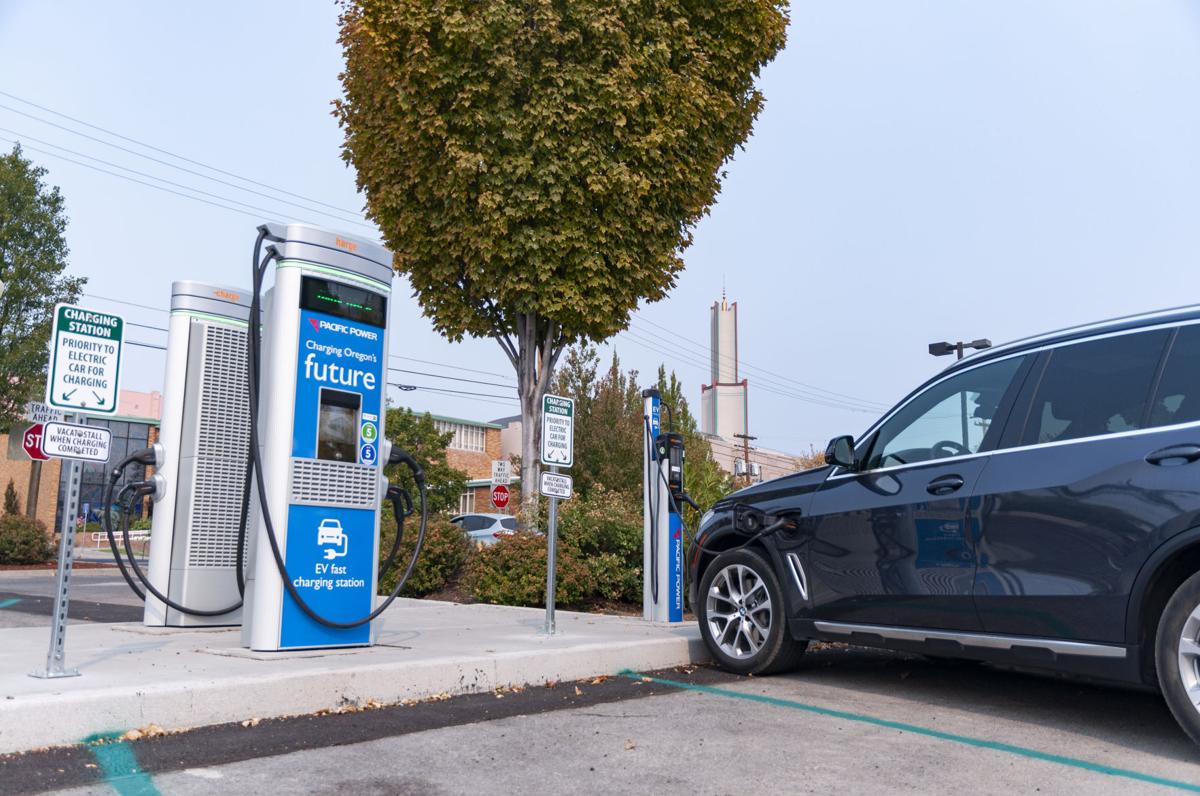 The five charging stations (four of which are fast chargers that can fill up a car in 20 to 40 minutes) are located in a city parking lot directly behind Sugarman's Corner.

The five charging stations (four of which are fast chargers that can fill up a car in 20 to 40 minutes) are located in a city parking lot directly behind Sugarman's Corner.

Todd Andres, Pacific Power’s regional business manager, led a ribbon-cutting ceremony on Thursday at a city-owned parking lot behind Sugarman’s Corner. Representatives from the city, county chamber of commerce and county tourism bureau joined him in commemorating the step toward a low-carbon future.

“To many years of charging,” Andres announced as he cut the ribbon.

Four of the stations, manufactured by California-based ChargePoint, can fully charge a vehicle in 20 to 40 minutes. A fifth station can complete a charge in a couple of hours. Because the four fast-charging stations are dual chargers (the first of their kind in the area), they can support all makes and models of electric vehicles. A total of six cars can fuel up at once at the cluster of chargers.

The stations, operated by Pacific Power, draw from the electrical grid and charge customers in accordance with power rates. That makes an electric vehicle’s fueling cost lower and more stable than that of a gas-powered one: Andres said the current price of a charge equates to about $1 per gallon of fuel.

As more drivers in California and Oregon begin to switch to electric vehicles, city officials hope the charging station will attract travelers and residents alike to Klamath Falls. This is the first charging station that can accommodate multiple cars in the city center.

“This smart and genuinely open solution will support and encourage the new and growing subset of electric vehicle drivers to stop and spend some time in downtown Klamath Falls,” said Klamath Falls city manager Nathan Cherpeski.

Discover Klamath executive director Jim Chadderdon envisioned tourists stopping for a charge on their way from California to Crater Lake or Bend, as most routes to central Oregon from Los Angeles and the Bay Area go through Klamath Falls. Being so close to downtown and having 20 minutes to kill, they’d be well-positioned to patronize local businesses.

“Placing it downtown brings people into the downtown,” he said. “Plus, it’s close to the freeway.”

Chadderdon said Discover Klamath is planning to install weatherproof receptacles at each station containing brochures, which explain where drivers are and what downtown businesses they should check out. Tracking how many brochures are taken during a given time (along with how many charging sessions occur) will help the city evaluate how much drivers are using the chargers.

Beyond erecting low-carbon infrastructure, Chadderdon said installing the chargers was a practical move to meet the demands of the future.

According to a BloombergNEF report, electric vehicles are expected to jump from 2.7% of new car sales in 2020 to 10% in just five years — and to 28% by 2030. Improved technology will make EV batteries and powertrains more affordable and accessible, but a charging infrastructure needs to exist to accommodate all those new cars.

“The demand for these sort of charge stations is just going to increase over time,” Chadderdon said.

The new charging station is also part of a statewide effort to increase the use of zero emission vehicles. An 2017 executive order set a goal of 50,000 such vehicles on Oregon’s roads by the end of 2020. According to the Oregon Electric Vehicle Dashboard, just under 32,000 are registered in Oregon as of October 2. Of those, 122 are registered in Klamath County.

A state law passed in 2016 requires investor-owned utilities like Pacific Power to eliminate coal-fired power from their electricity supplies by 2030.

The law also directs utilities to construct electric vehicle charging stations in rural areas to ensure they won’t be left out of the energy transition. Andres said Pacific Power’s downtown Klamath Falls station is one of five stations in the utility’s rural service area.