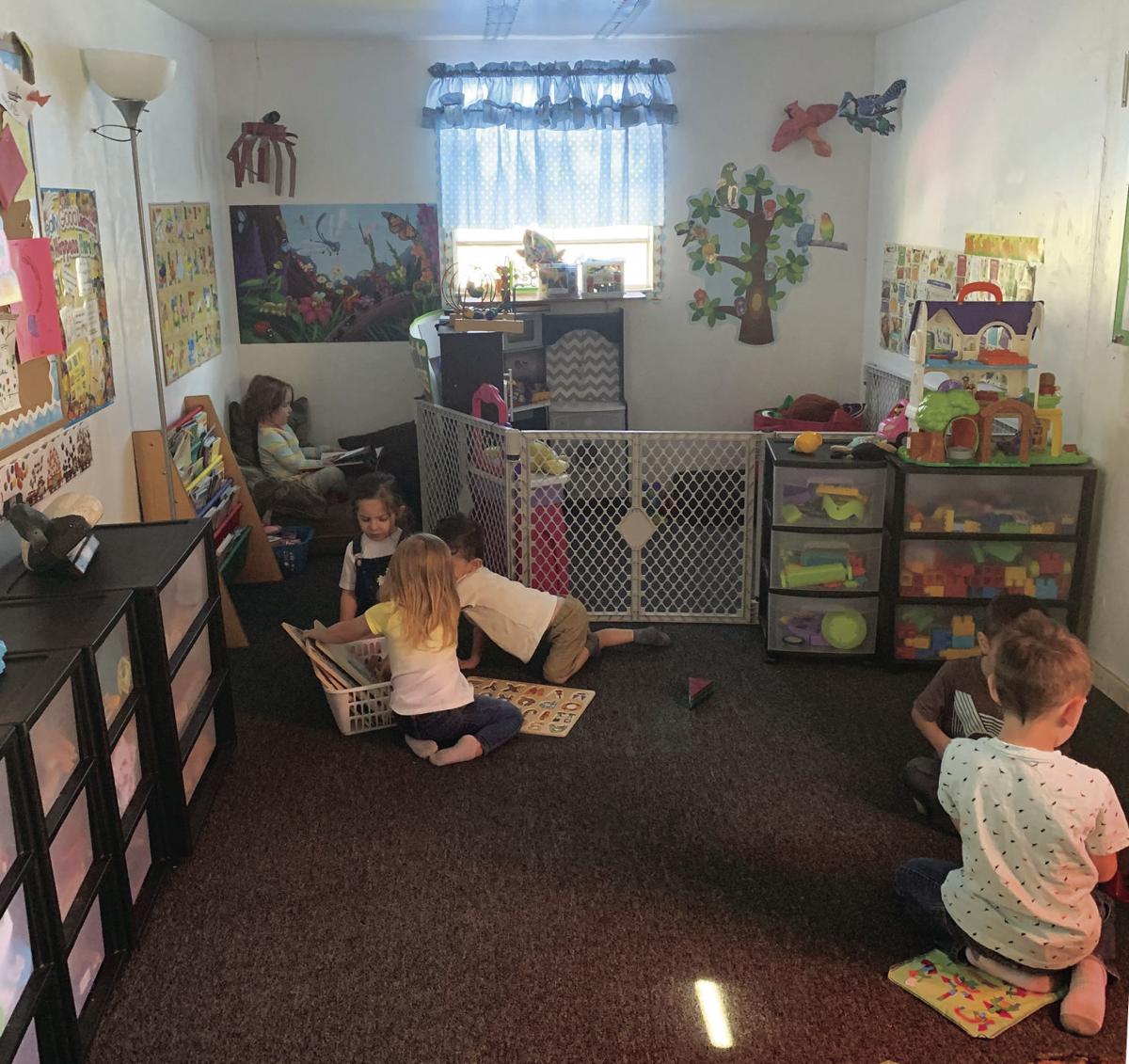 The preschool class at Nic Nacs Quality Childcare with fewer kids because of restrictions to stop the spread of the coronavirus. 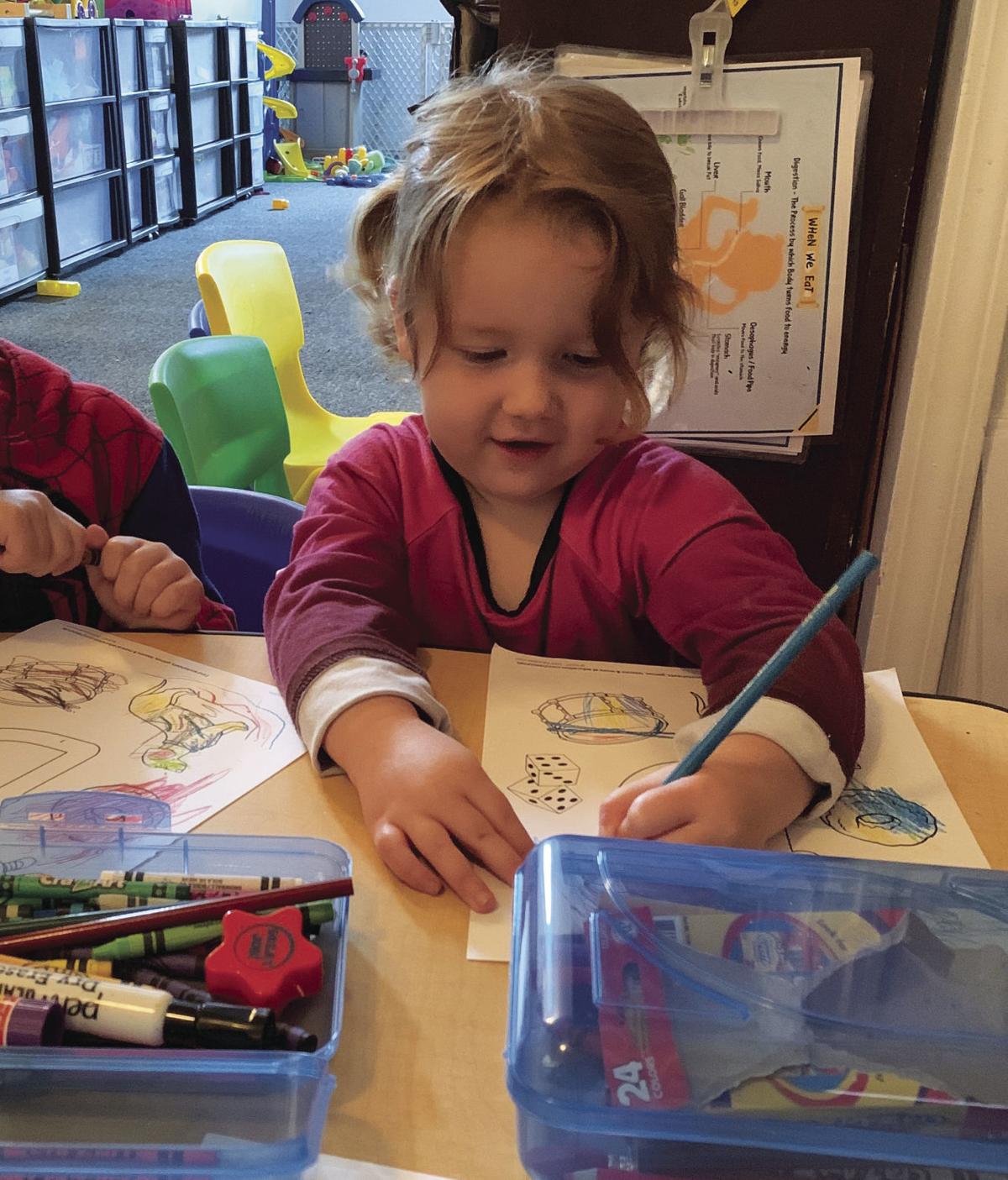 Ava G. colors at Nic Nacs Quality Childcare where owner Nichole Gruszie had to reduce her class size to comply with restrictions to reduce the spread of the coronavirus. 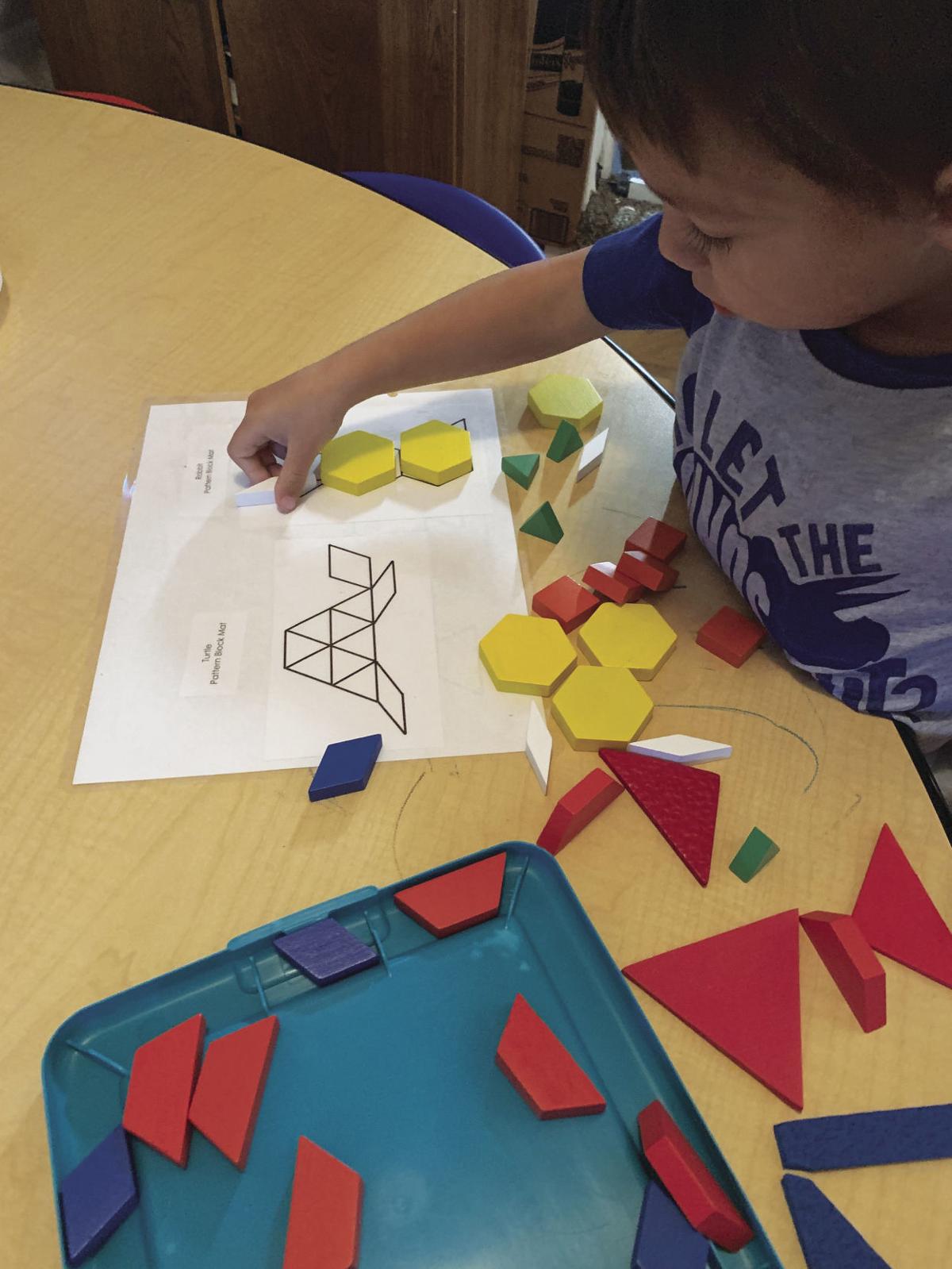 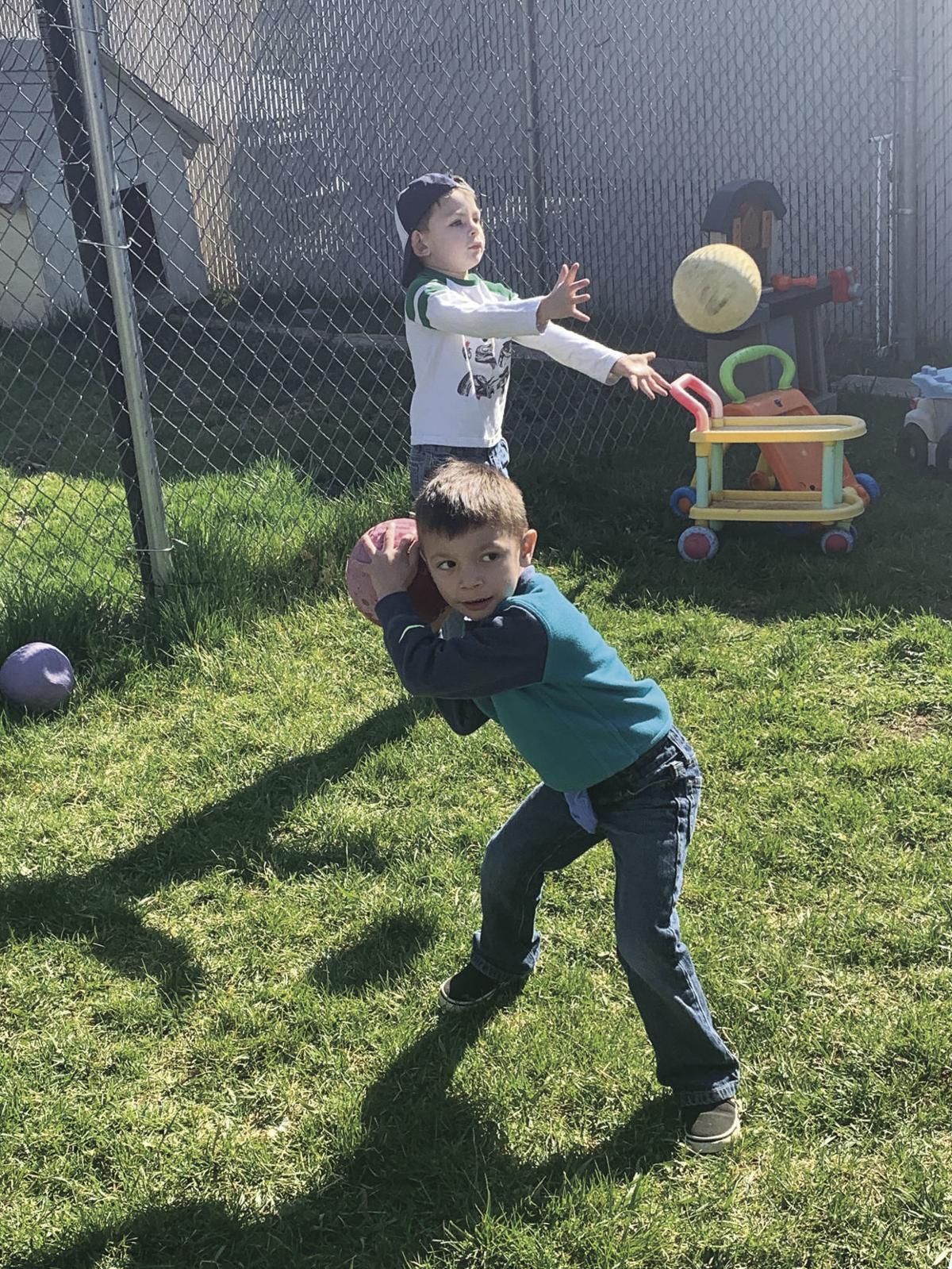 Jaece W. and Karter S. play outside for recess at Nic Nacs Quality Childcare in Klamath Falls, where owner Nichole Gruszie had to tell five kids that she could no longer take care of them due to restrictions to slow the spread of the coronavirus.

The preschool class at Nic Nacs Quality Childcare with fewer kids because of restrictions to stop the spread of the coronavirus.

Ava G. colors at Nic Nacs Quality Childcare where owner Nichole Gruszie had to reduce her class size to comply with restrictions to reduce the spread of the coronavirus.

Jaece W. and Karter S. play outside for recess at Nic Nacs Quality Childcare in Klamath Falls, where owner Nichole Gruszie had to tell five kids that she could no longer take care of them due to restrictions to slow the spread of the coronavirus.

Nichole Gruszie, owner of Nic Nacs Quality Childcare in Klamath Falls, had 14 kids that she cared for Monday through Friday from 7 a.m. to 5 p.m. every week. That changed, however, when Oregon Governor Kate Brown enacted restrictions on businesses and gatherings to stop the spread of COVID-19. Overnight, Gruszie said, she had to get her class size down to 10 kids, including her own who could no longer attend school.

This wasn’t easy for Gruszie, who had to set aside her feelings of caring for the kids she spends so much time looking after and had to think practically, in terms of need: which kids she could continue to allow into her day care every day and which kids she had to say goodbye to, for now.

She had to consider if the kids’ parents are essential workers or if they were able to stay home with their kids in light of restrictions impacting other businesses and schools across the country. Gruszie knew some parents would be able to stay home with their kids, like parents who attend Klamath Community College which has shifted classes online. Others, she knew, needed the child care in order to continue to serve the community on the front lines of the fight against the virus.

“I had to base it on a priority, which was emotionally draining because I sat here for hours and hours and hours the night before,” she said. “And then I had to make the tough call to talk to those parents.”

While people on the front lines of battling the virus in our community are crucial, Gruszie said she and other day care workers are often those people’s first stop in the morning.

Regardless of how hard this is for Gruszie, whether it’s the emotional strain of having to tell some of her students they can’t come back for a while or the financial burden the smaller group creates, she said she does her best to remain positive and strong for the children who look to her as an example and as a caretaker.

“I don’t show it because there’s so many people that rely on my face and my tone of voice, and so I just hold it all in, and I do what I’m supposed to do,” she said. “And I read the scary stories, and I watch the scary news, and I still get up every morning and do it.”

Gruszie said she doesn’t wear a mask so that she doesn’t scare the kids, but said she’s been staying home and been vigilant about other precautions to ensure the virus doesn’t spread into her home-care facility.

She said she’s kept on top of all of the news and guidance from health and governing authorities about best practices to keep her and her kids safe. She has begun taking her temperature every morning before she accepts kids and taking the children’s temperatures before they come inside. She has also stopped allowing parents inside where they are normally permitted to come into the center and sit with their kids.

She’s also implemented more small groups, rotating the kids through stations by age groups instead of having all of the kids do an activity at once.

Gruszie has seen other childcare facilities close down during this time, but said she’s fighting to stay open to be a service for those who need it and to be a dependable figure in these families’ lives.

“In order sustain a parent’s stress level, they need someone dependable, they need the familiar and you can’t just say one day, ‘Okay, my child’s not coming anymore and I’m just going to go put them with John down the street,’” she said. “I have a personal relationship almost with all my families, and so if they’re not able to stay with the familiar program, then their stress level, how can they go out and do this frontline work?

“The parents, they need structured environments for their children that’s positive and loving and caring and familiar and my heart would break right now with any of the children that are left in my program if they had to go to a strange place — what it would do to their emotional stability.”

Gruszie’s even had some of her parents donate supplies to her like toilet paper, hand sanitizer and crackers, which “warms my heart,” she said.

While the kids might not understand the virus, Gruszie said she’s trying to be aware of their responses and has been working with them more to express their emotions, all while trying to keep talks as positive as possible.

“I’m having more positive talks and doing more reading our emotions book because we have our color monster books that has colors that are based on emotions. I’ve read that more. I can tell yesterday was a really hard day for some of them, I could tell that, okay, it’s time to start doing more stuff outside. I’m trying to be as aware as possible so they’re not so affected,” she said.

A little way she said she’s trying to keep a positive spin on the changes in behavior expected from them is finding a fun alternative to things like hugs and other touching amongst the kids. She’s having them air hug instead.

While Gruszie said she’s as worried as anyone else about the virus and it spreading, she thinks the families she works with are taking this seriously, too.

“My parents are amazing. I just talked to all of them and from what I see nobody’s doing large groups. Children aren’t going out with their parents. They’re being really respectful because I’m being respectful,” she said. “And we’re all in this together.”

Although she’s had to temporarily reduce the number of little ones she sees each week day, Gruszie said she’s not giving away the spots of those she can’t see right now.

“There’s no riches in doing child care — there’s love, there’s compassion, there’s care, there’s sacrifice, and I just want people to know — I just want everyone to appreciate the first stop before you go to that frontline job is your childcare program.”