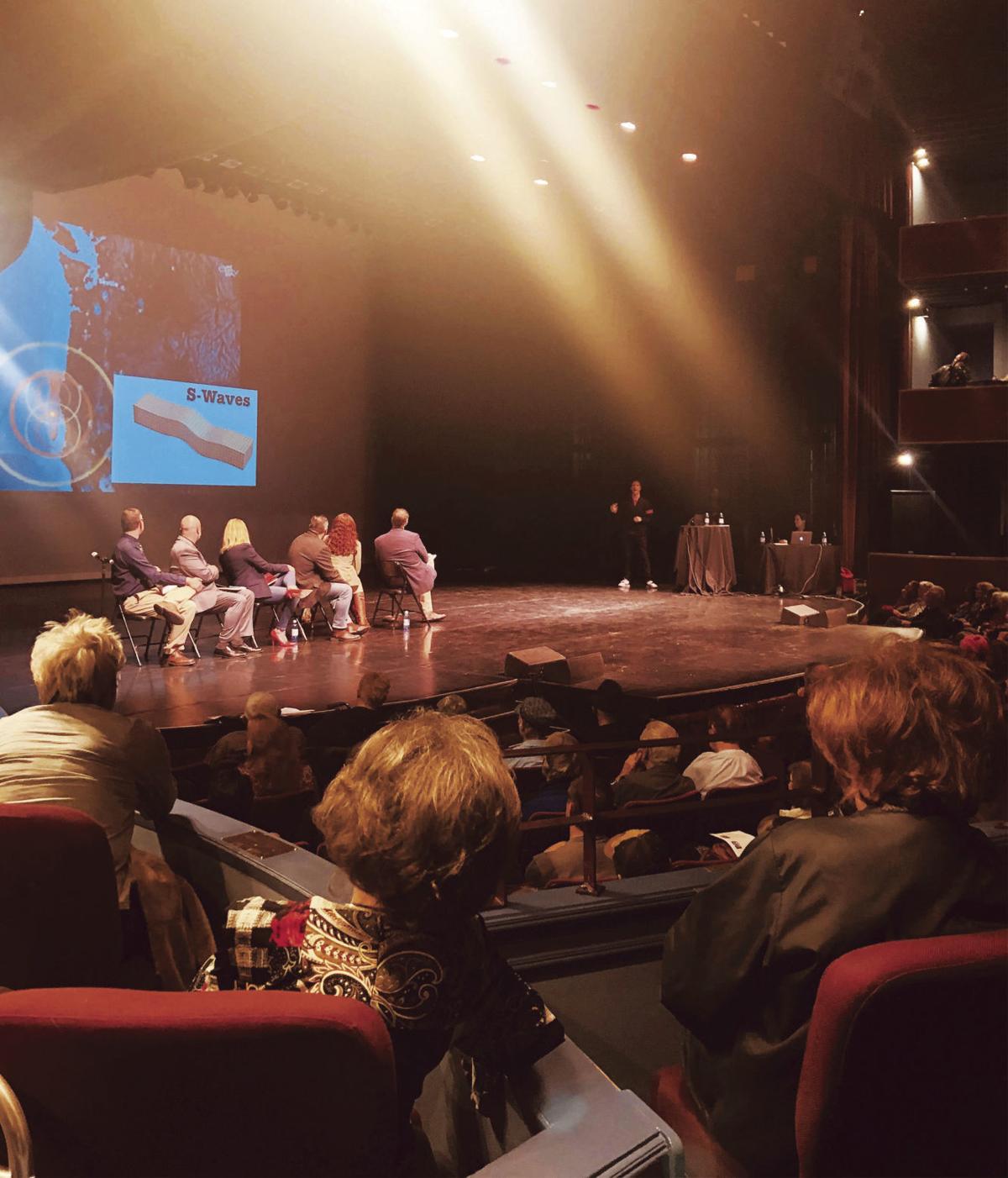 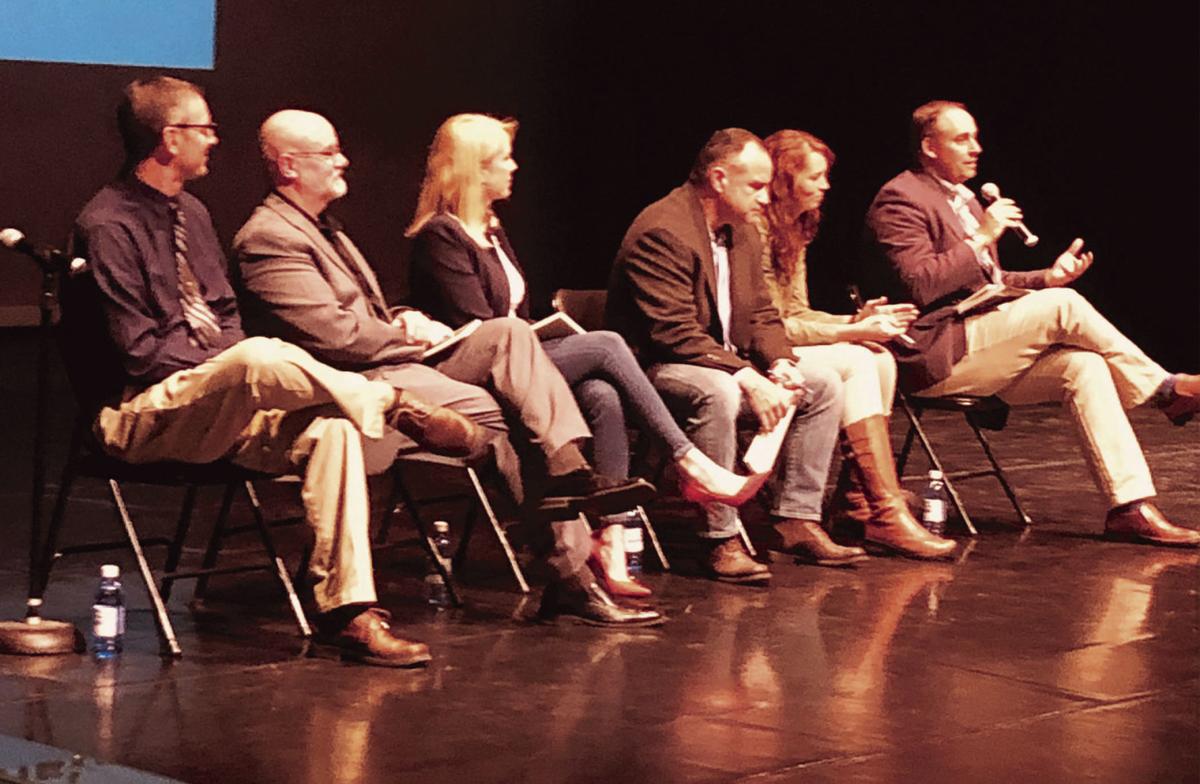 Klamath Falls could be equipped for helping residents on the Interstate 5 corridor recover once the Cascadia earthquake hits.

That was the message heard by about 650 people who attended a TEDx-style presentation Saturday night at the Ross Ragland Theater, by former Klamath Falls residents Steven Eberlein and Lydia Ledgerwood-Eberlein. The couple founded Portland-based “Tipping Point Resilience” in December 2018. Eberlein and Ledgerwood-Eberlein aim to prepare West Coast communities located in the Cascade subduction zone for earthquake preparedness for whenever Cascadia occurs.

The Cascadia earthquake is slated to impact Western Canada, Washington, Oregon and Northern California all at the same time, Eberlein said.

“Most of the places I’m speaking to aren’t going to play a recovery role in the way Klamath could,” Eberlein said.

For places like Eugene, Salem and the greater Portland area, Eberlein makes presentations all about survival during and following the earthquake. Klamath Falls is slated to be indirectly impacted from the earthquake, but the chances are that most of the destruction will fall on those living west of the Cascades.

Eberlein and Ledgerwood-Eberlein know, despite when it occurs, that they want residents and their families to be prepared to help themselves by storing two weeks of food and water – which will also allow them to help neighboring communities in Western Oregon expected to have even more difficult impacts.

Both Klamath Union High School graduates, Eberlein (1996) and Ledgerwood-Eberlein (1994) have been working with local Klamath Falls residents to host such an event during the past year.

The last major earthquake of the magnitude that Cascadia is projected to be occurred in 1700.

It’s easy math for Eberlein to see as a call to action for those who live in the Cascadia subduction zone.

“We know we’ve had 43 earthquakes, we know it happens on average every 243 years,” Eberlein said.

“We know it’s been 319 years. That should be enough information to appeal to your common sense.

“From there it’s just understanding the general things that you should do,” he added.

Eberlein and Ledgerwood-Eberlein encourage storing up to two weeks of non-perishable food and a gallon of water per person for each of the 14 days.

“We’re asking you to kind of make a change to your life – to always be ready for something that’s uncertain, but is certainly going to happen eventually, and for your children and your grandchildren to pick up on those practices,” Eberlein said.

“It’s a real mind shift that we’re trying to create throughout Oregon.”

The couple has a unique perspective on the topic, having lived through the 1993 Klamath Falls earthquake, and the 2004 Sri Lanka tsunami triggered by a major earthquake.

While not seismologists, Eberlein and Ledgerwood-Eberlein have done extensive research and aim to share their findings throughout the Pacific Northwest.

“We lived through one of the largest disasters in modern written history then come back to the Pacific Northwest just in time to learn that we’re waiting for the exact same thing to happen here,” Eberlein said. “So we have this eerie feeling like we’re Oregonians who have already lived through the future.”

Both said while they weren’t anticipating such a large turnout for the free event about Cascadia preparedness, they credit a “committee” of individuals who spread the word and nearly filled the Ragland.

“The special things that small towns can do is mobilize each other through word of mouth.”

Also on stage during the event was a panel of local residents who took questions from the audience about the impact Klamath Falls could make after the earthquake.

Eberlein and Ledgerwood-Eberlein and Andrew Phelps, director of the Oregon Office of Emergency Management, also met with about 40 engineering students from Oregon Tech following the presentation.

“I had a chance to talk to them about earthquake early warning technology, which right now is really exotic stuff,” Eberlein said, “and in 10 years will be very common place.

“Our company is working to be at the forefront of earthquake early warning technology education,” Eberlein added.

■ A video of the Tipping Point presentation will be available temporarily on the Ross Ragland's website at a date to be announced.

■ Those with questions about the “Cascadia” earthquake and it's impact on the Basin can reach out to Eberlein, director of workplace resilience at “Tipping Point,” at steven@tippingpointresilience.com.

■ Learn more about “Tipping Point Resilience” website online at tippingpointresilience.com. Other helpful links on hazard preparation — how to build and emergency kit and create an emergency plan — include: https://bit.ly/2NhNNGO and https://bit.ly/2WNZVCz.