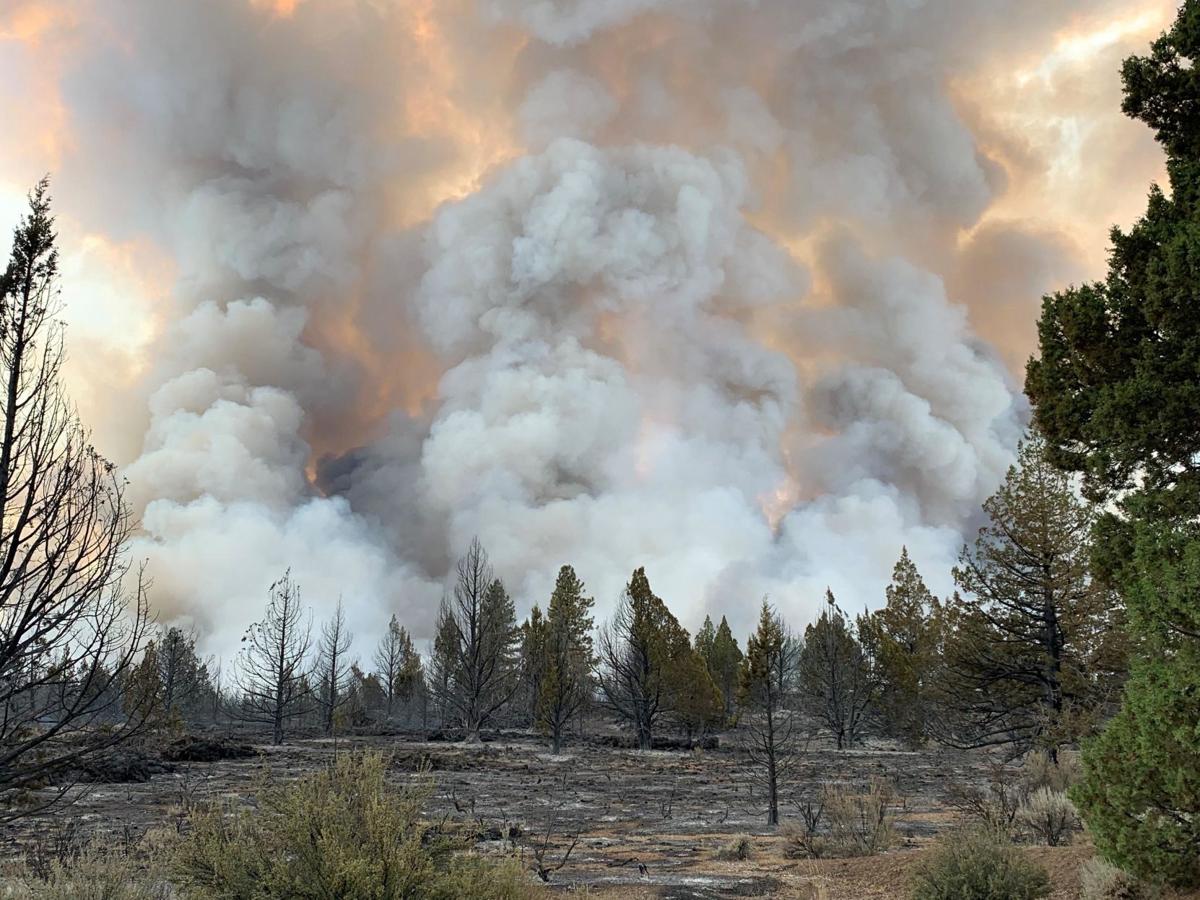 The Caldwell Fire burns over the weekend near Tulelake, California. 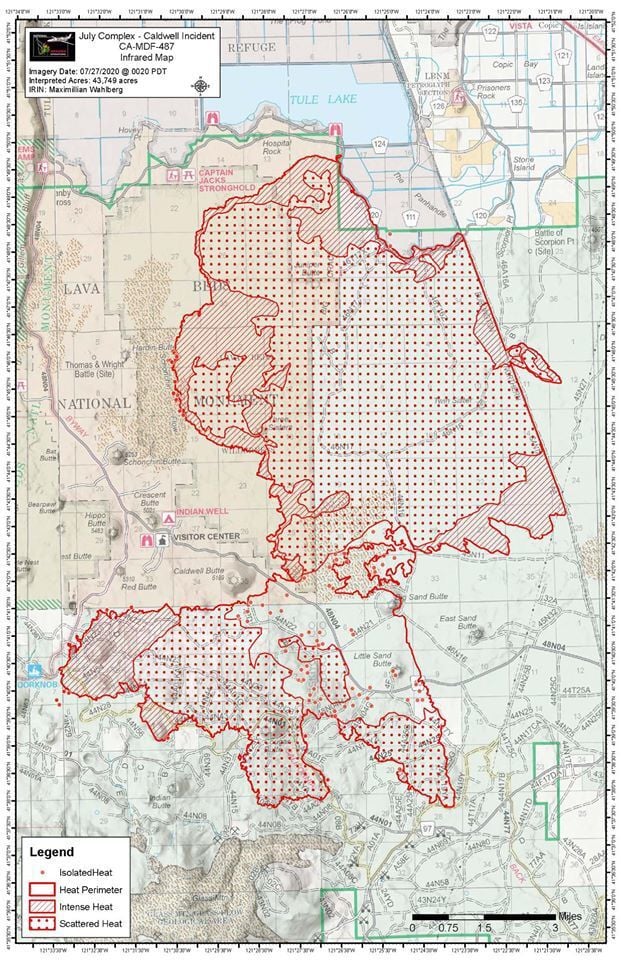 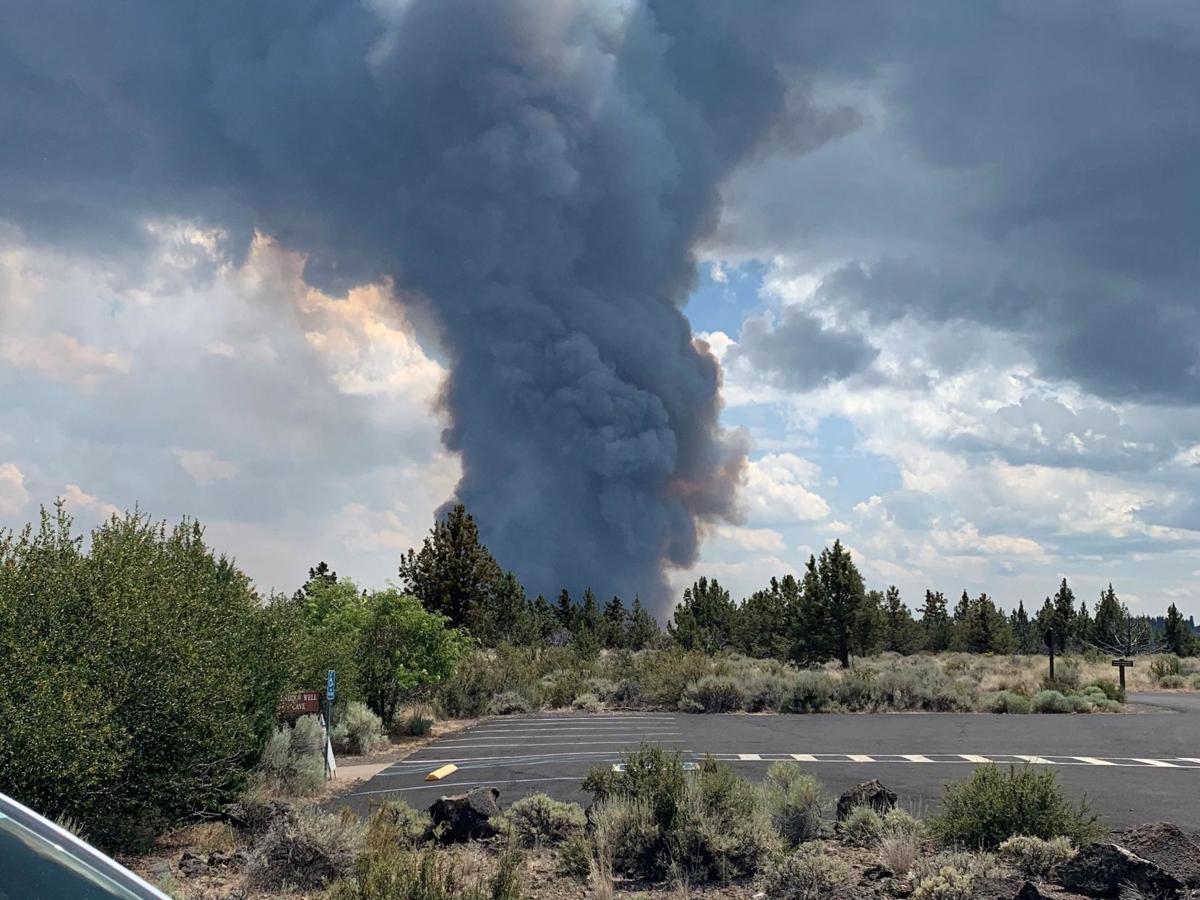 Part of the July Complex, the Allen Fire sends a plume of smoke into the air on Monday, July 27.

The Caldwell Fire burns over the weekend near Tulelake, California.

Part of the July Complex, the Allen Fire sends a plume of smoke into the air on Monday, July 27.

High winds and thunderstorms Sunday and Monday caused a significant flare-up of the Caldwell Fire near Tulelake, forcing evacuations and damaging some buildings.

As of press time Monday the fire had grown to 46,082 acres in size and was just 20 percent contained. There were 1,484 people fighting the blaze that was burning through tall, dry grass as well as brush and timber. It is believed to have been started by lightning.

Mandatory evacuation notices were in effect for the community of Tionesta, the Medicine Lake Recreation Area and areas outside the city of Tulelake between county roads 120 and 124 near Lava Beds National Monument. On Monday afternoon, roads were closed near Highway 139 as the fire moved east. Evacuation warnings were also in effect for the Copic, Panhandle and Peninsula areas south of Highway 139.

Smoke from the Caldwell Fire, and others in Northern California being called the “July Complex,” blew across the Klamath Basin, sending smoke and haze into the center of Klamath Falls and beyond.

A Red Flag Warning was issued for abundant lightning on dry fuels until 11 p.m. Monday night for much of the region. The Caldwell Fire tripled in size on Sunday and early Monday, fueled by those thunderstorms and strong winds.

Firefighters have made significant headway against the Ben Young Fire near Paisley. According to the South Central Oregon Fire Management Partnership, the wildfire was at 1,250 acres and 75 percent contained as of Monday.

On Sunday, firefighters patrolled and secured perimeter, and on Monday that work would continue. Crews will also begin hauling unneeded equipment and supplies from the fire to assist in other locations.

The Gold Fire, located south of Adin, grew to 21,870 acres in size since it sparked July 20 and is currently at 60 percent containment. That fire destroyed 13 structures and damaged five others. Two firefighters were injured while battling the blaze as well. About 2,000 people were assigned to fight it as of Monday night.

The Hog Fire, located near Highway 44 at Hog Flat, had grown to 9,545 acres and was at 64 percent containment. Two structures were destroyed by that fire as of Monday. Its cause is unknown. Residents in the area were allowed to return to their homes.

According to the Klamath National Forest, 16 confirmed fires were started by lightning on Sunday and Monday on the forest. None were larger than an acre.

Visit Oregon Smoke for information on smoke in your area.

A compilation of photos snapped from the same spot Friday, July 24, and Monday, July 27, in Klamath Falls.