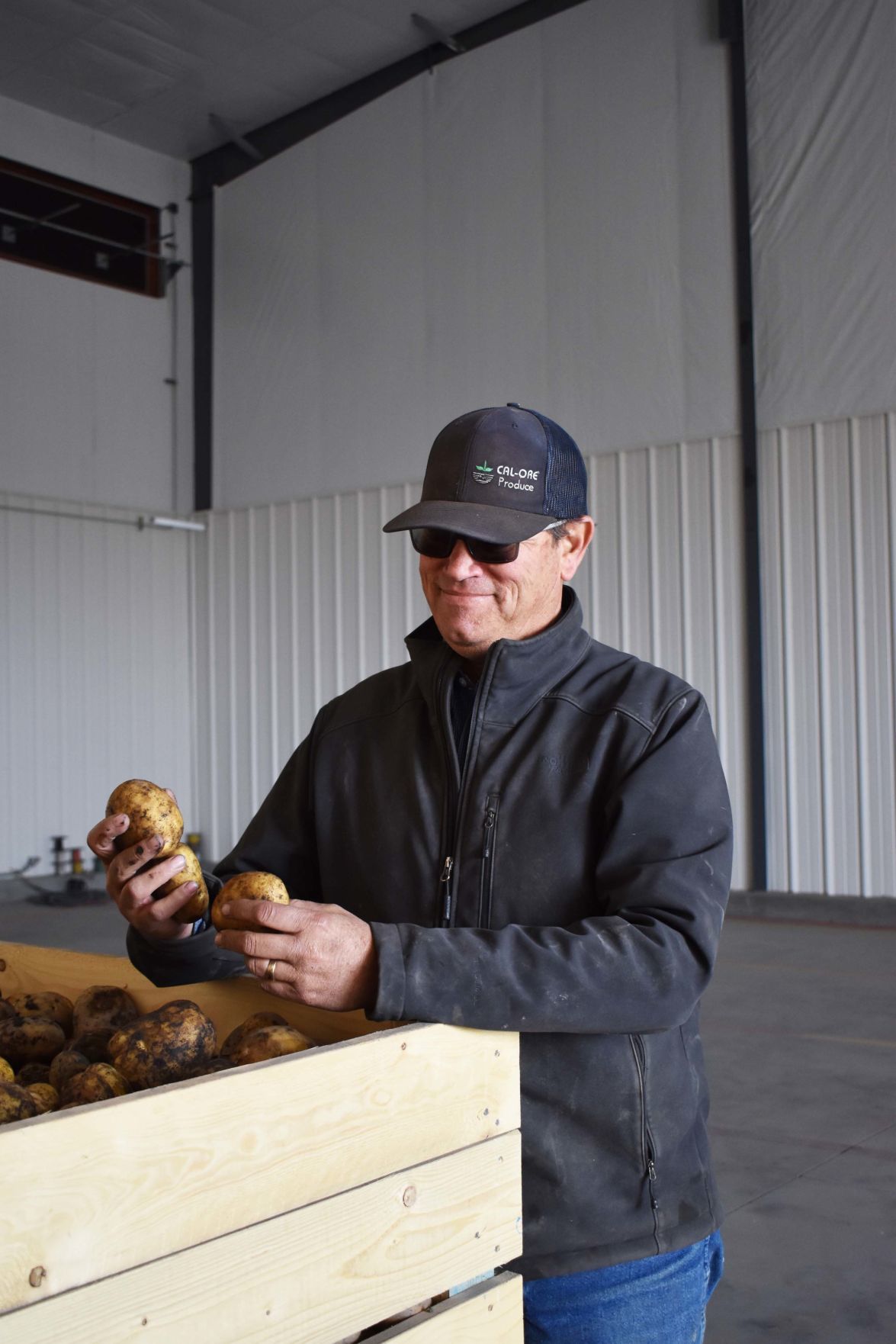 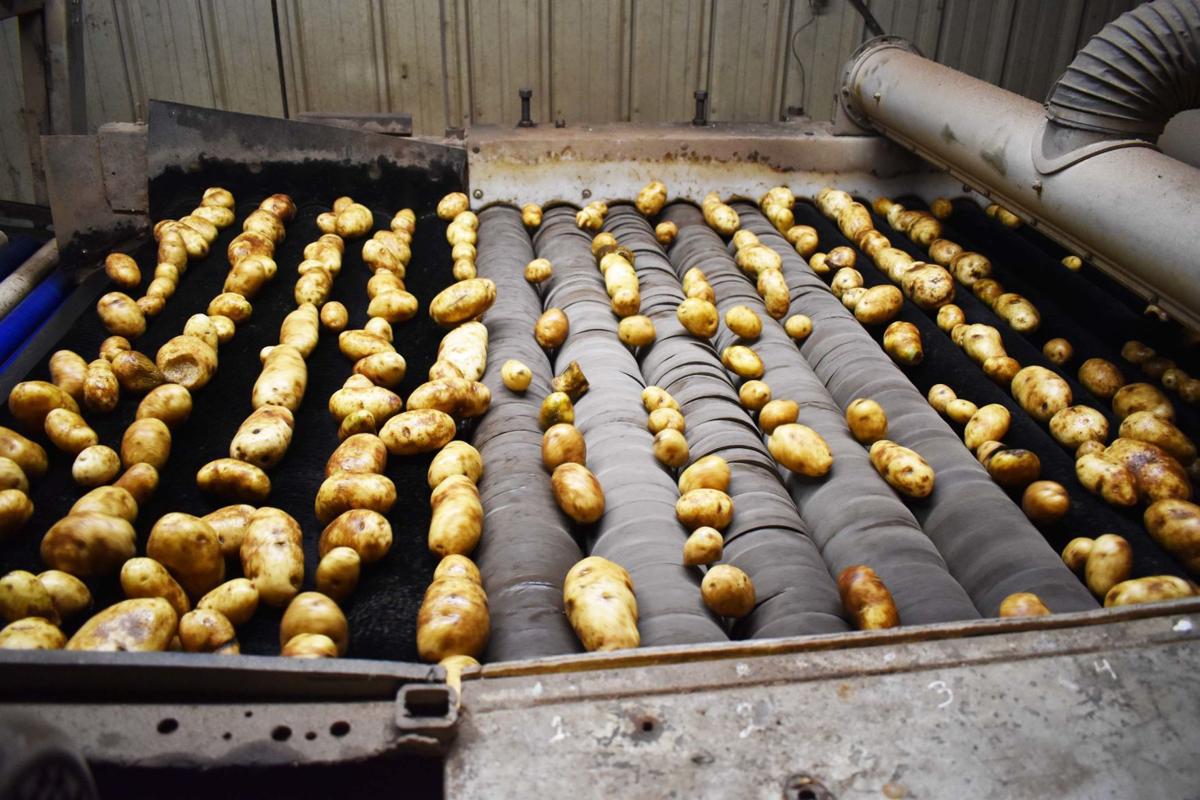 Potatoes are cleaned on a conveyor belt wrapped with cloth to help clean the remaining dirt off of the potatoes. 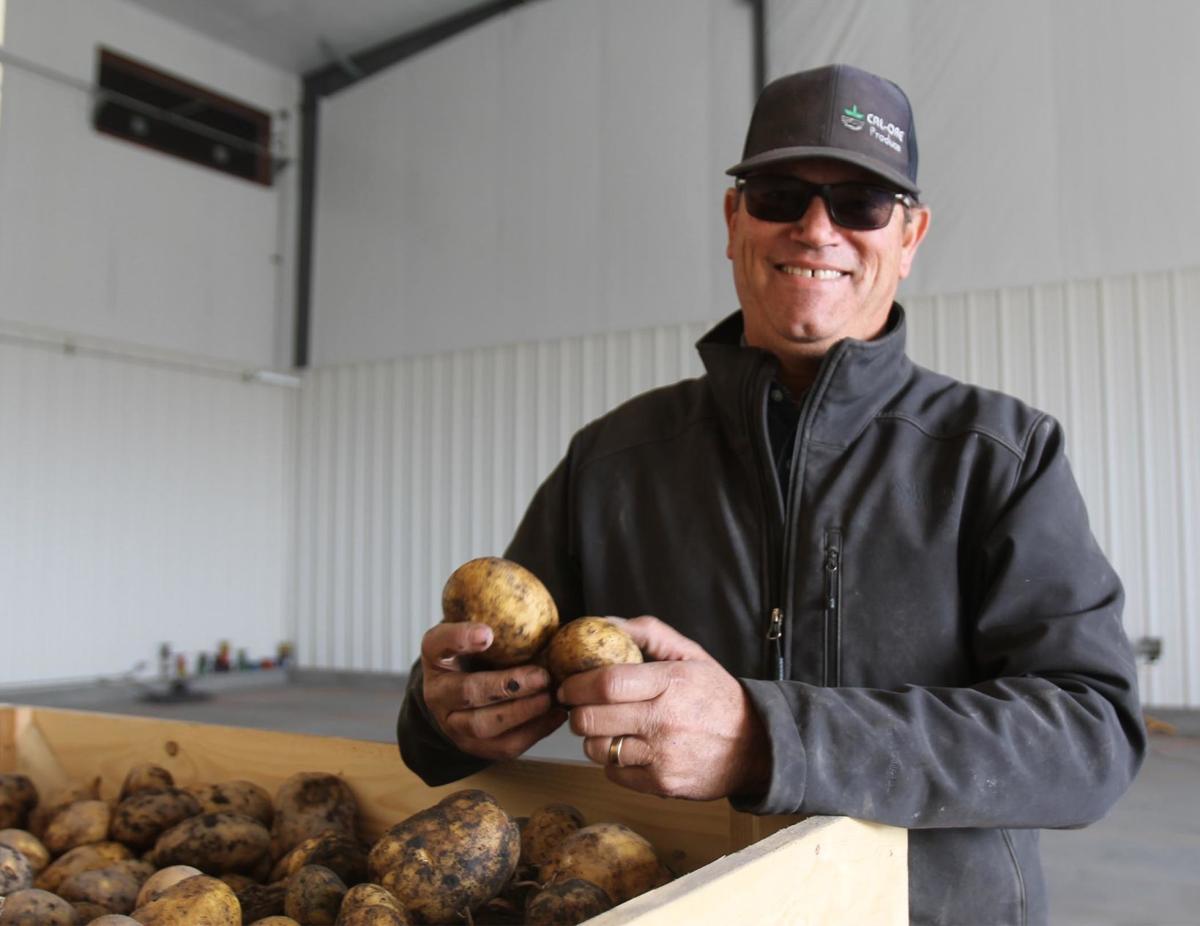 Sid Staunton, of Staunton Farms and Cal-Ore, on Thursday showcases potatoes being stored in a manufactured box at the Tulelake plant. 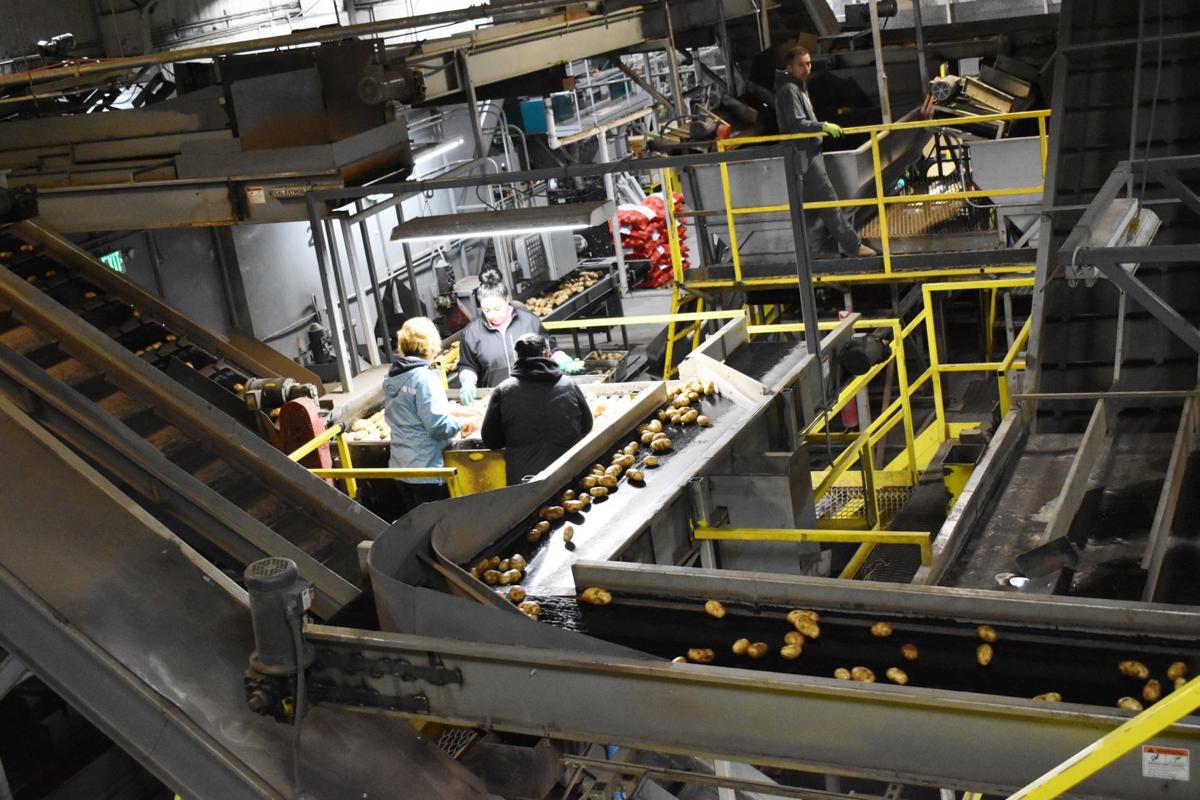 Potatoes on conveyor belts are cleaned and prepared for packing by workers.

Potatoes are cleaned on a conveyor belt wrapped with cloth to help clean the remaining dirt off of the potatoes.

Sid Staunton, of Staunton Farms and Cal-Ore, on Thursday showcases potatoes being stored in a manufactured box at the Tulelake plant.

Potatoes on conveyor belts are cleaned and prepared for packing by workers.

This article has been edited to correct inaccurate information about the operation's customers. Cal-Ore does not pack or run chip potatoes, nor does it sell product to In-N-Out Burger.

TULELAKE – Boxing potatoes decades ago wouldn’t necessarily have been a storage strategy for Sid Staunton and Cal-Ore, but this is 2019.

The operation is working to expand on a boxing storage strategy that produces a higher quality product of small red and yellow potato varieties with a growing demand.

Staunton and his family are part of a multi-family operation located on the California-Oregon border called Cal-Ore., since 1980. Jake Baley and his father, Jim Baley, are part of the operation, and own one-third of the box storage side of the business.

“It’s kind of set up to be a high volume Russet plant,” Staunton said.

“Costco was such a big buyer of that big potato and they automatically switched,” Staunton said.

“This whole industry has changed,” he added.

The company is now responding to a younger generation of “Millennials” who are asking for smaller, organic spuds and more red and yellow varieties. Production of organic varieties are up to 850 acres, Staunton said.

“So we’ve been doing organics for 12 years. But we keep growing more and more of the red and yellows and smaller varieties.

“That’s a segment that continues to grow,” Staunton added.

Cal-Ore this year is implementing a European style box storage system to package and store potatoes, and at a lower temperature. Air is re-circulated inside the box to keep potatoes cool.

The boxes can each hold 30 sacks of 100 weight potatoes, which comes out to 3,000 pounds of potatoes per box.

That’s 20,000 sacks in total that the box storage facility built this summer can hold at the Cal-Ore., plant.

The result of the storage strategy is a potato that keeps fresh longer, and with about 30 percent higher quality.

Staunton found the idea while serving as chairman on what is now called the Potatoes USA, the national potato board of directors. His brother, Ed Staunton, currently sits on the board.

‘In the box’ thinking

Through Staunton’s travels across Europe while on the board, he noticed how potatoes were being packaged, and came away asking, ‘Why is everything in a box?' ”

“I was kind of intrigued by it,” Staunton said.

Staunton recalls specifically visiting a farm in Scotland where he saw a box of potatoes that looked like they were freshly dug.

In fact, they were the previous year’s crop and had been stored successfully from the previous growing season.

“So we kind of got going on that concept,” Staunton said.

At the time, he couldn’t get a buy-in from banks because, well, nobody else boxed potatoes.

“They just laugh you out the door,” Staunton said.

“But some of the European companies were moving to the United States with the technology.”

In 2015, Staunton said Cal-Ore started talking with TOLSMA, a Belgium company, about a box storage system.

“This was the plan from the get-go was to build a big box storage,” Staunton said.

Staunton Farms, as a part of Cal-Ore, took the lead on a project to test 15,000 potato sacks of 100-weight in a re-insulated storage cellar over a three-year period.

“It’s kind of my baby,” Staunton said, of the project.

“We used apple boxes, which are much smaller, but it was just an economic way of trying the process.”

In the three-year period, Staunton said it was clear the approach made a lot of sense.

And the proof of box storage is in the potato.

While the cost is higher to manufacture the boxes, which include supplies shipped from Poland, the value is in the improved potatoes, according to Staunton.

“You don’t see any wet potatoes,” Staunton said. “They’re all getting the right amount of moisture.”

Since the company works with suppliers all over the West Coast, the demand is high.

“The demand, it really builds because nobody has it,” Staunton said.

There’s more coming on the horizon as well.

The Stauntons plan to expand the strategy by converting one of their buildings at the plant to a European red and yellow organics packing line by February 2020.

“It’s a process but we’re trying to give the customer the product that they want,” Staunton said.

And Staunton admitted, there’s some risk involved, including with the prices of organics. But it’s a risk worth taking.

“It just seemed like we weren’t doing that the old way,” Staunton said. “So it was either, go do something else or try this.”

Staunton also expressed relief about a growing season that in comparison to last summer largely didn’t include smoke or as many restrictions on water usage.

“We had the water, we had good weather, we’ve had a very nice harvest,” Staunton said. “We had some cold that was concerning but it didn’t get as cold as it was supposed to be, so long story short, it’s been very comforting. It’s been so stressful the last several years.

“And we’re excited for this,” Staunton added.