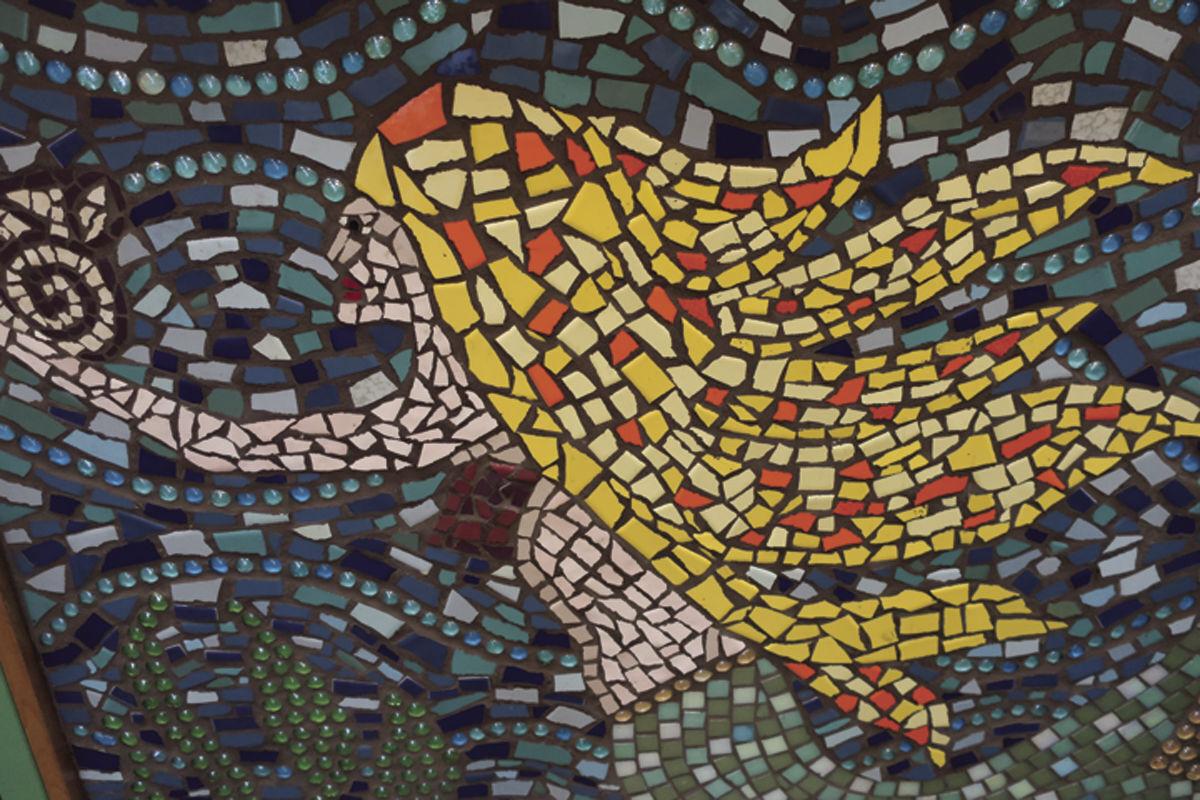 The Mosaic that inspired the name "Mermaid Garden Cafe." 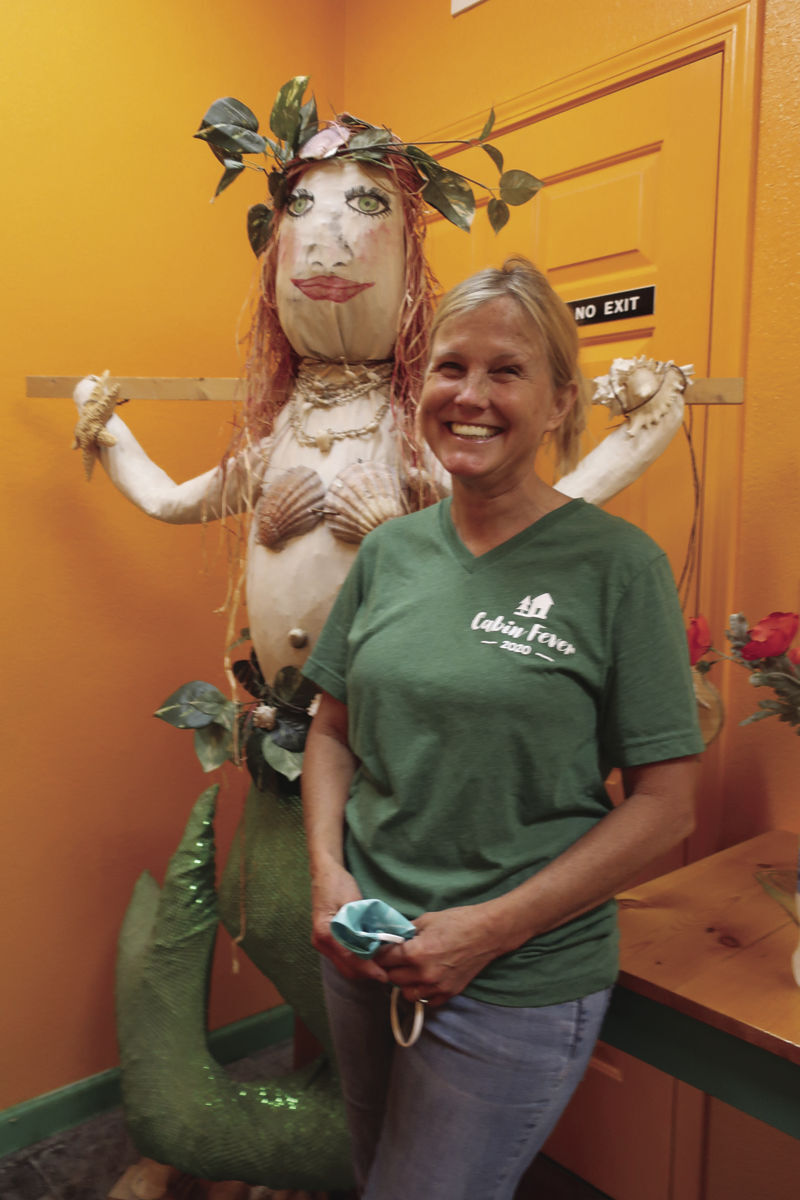 Kelly Waterman-Raye and one of her mermaids. 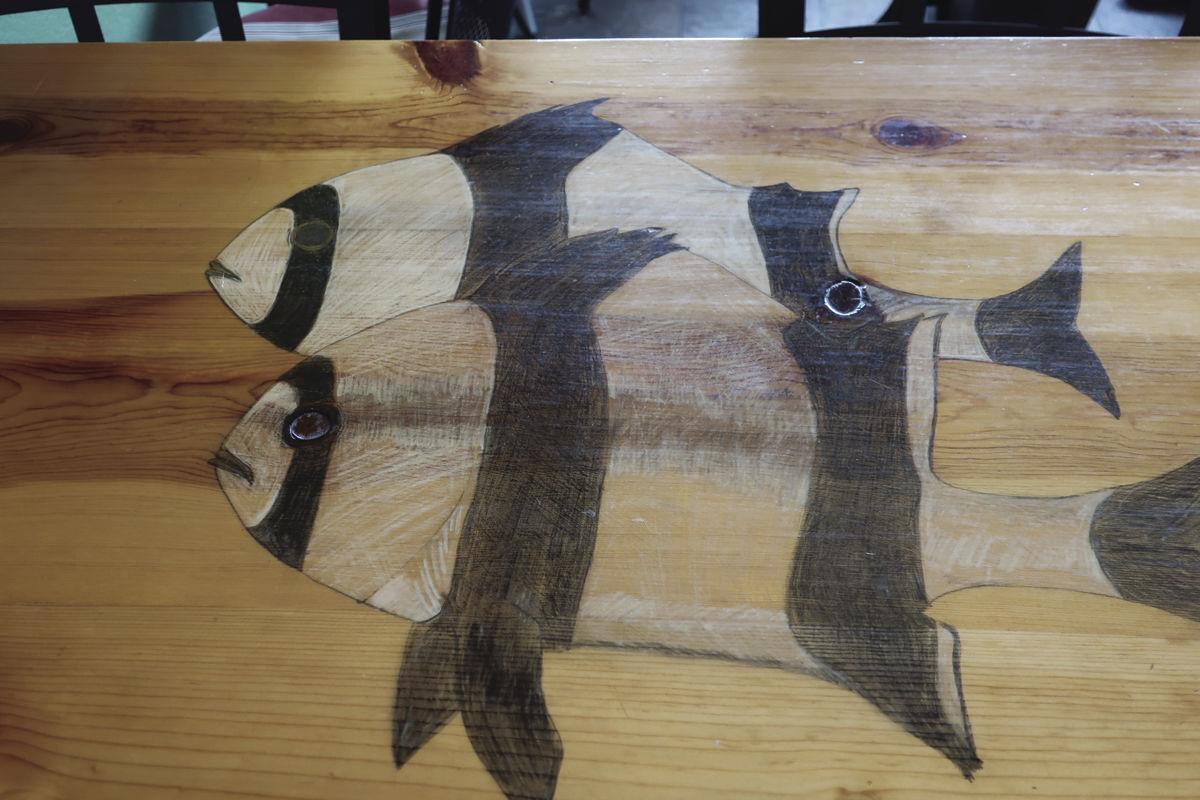 The Mermaid Garden Cafe features unique carvings on its tables. 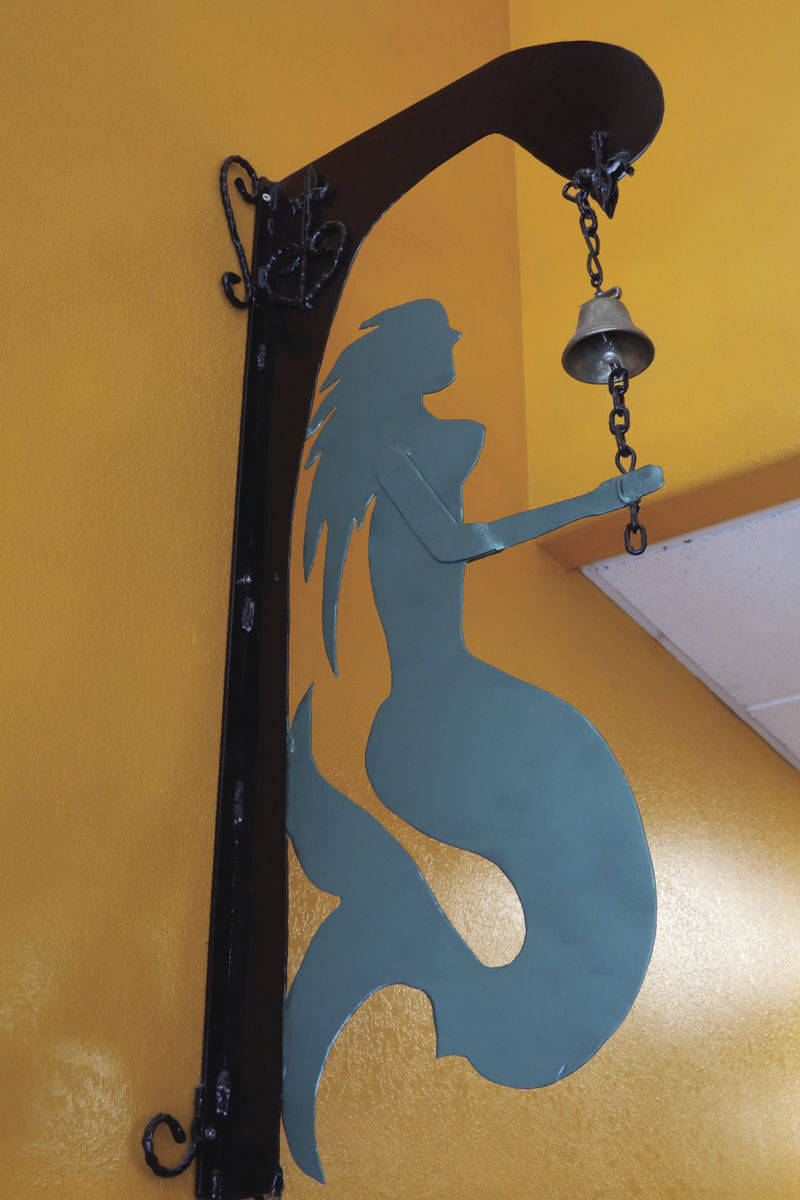 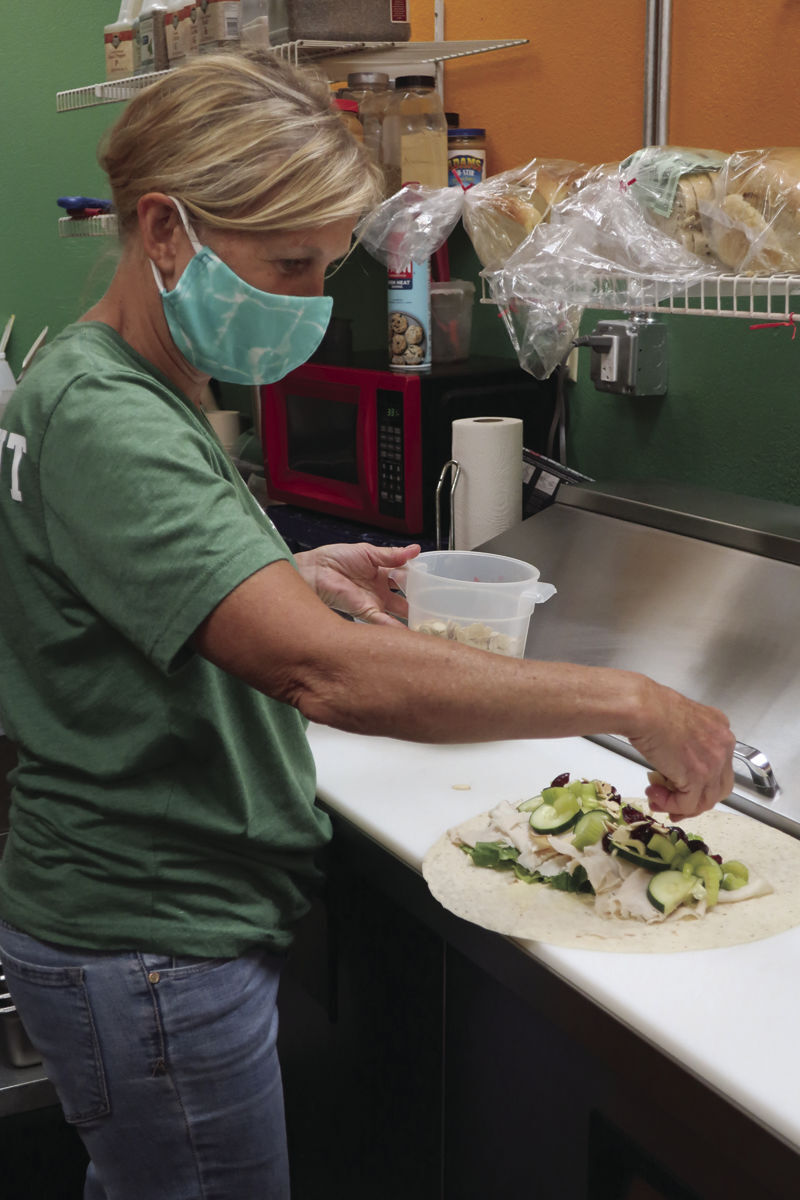 In the kitchen fixing a sandwich. 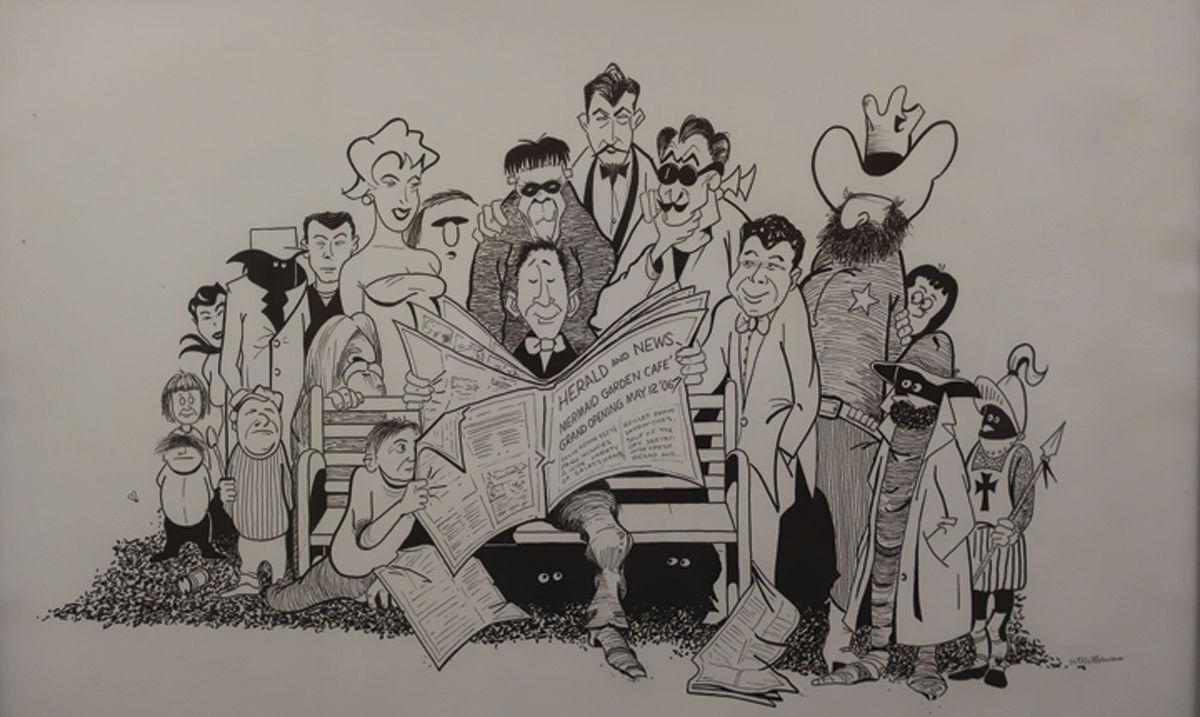 A cartoon done by Kelley Waterman-Raye's late father when the Mermaid Cafe Garden opened in 2006.

The Mosaic that inspired the name "Mermaid Garden Cafe."

Kelly Waterman-Raye and one of her mermaids.

The Mermaid Garden Cafe features unique carvings on its tables.

In the kitchen fixing a sandwich.

A cartoon done by Kelley Waterman-Raye's late father when the Mermaid Cafe Garden opened in 2006.

As a young girl, Kelly Waterman-Raye imagined working in a restaurant.

“I was a horrible waitress, but I have always enjoyed the kitchen,” she said. So she naturally found her way there. Since May 2006, the kitchen at The Mermaid Garden Café in downtown Klamath Falls has been her second home.

“At that time we didn’t have a lot of healthy choices,” recalls Waterman-Raye, who moved to Klamath Falls from Kansas in 1992, of downtown’s dining options.

For the past 14 years the Mermaid Garden has been offering a variety of homemade salads, paninis and wraps along with cups and bowls of soup that change on a daily basis. While the soup choices vary – during a recent week they included creamy broccoli, roasted red pepper, sweet corn, wild rice and mushroom, roasted cauliflower, curried pumpkin, and Thai chicken – the rest of menu remains mostly unchanged.

“There are certain things I can’t take off the menu because people won’t let me,” she tells with a smile warm enough to cause the soup to boil.

Some regular customers repeatedly order their own favorites while she says others “work their way through the menu.”

Waterman-Raye is the restaurant’s only cook, which she believes ensures consistency and lures repeat customers.

“They know they’re always going to get the same food,” she said.

When she opened the Mermaid Garden, one of her goals was to keep limited hours because she was single mother with three sons. At the time her youngest son was just 9 years old. Even though they’re older now – Patrick is 27, Wyatt is 25 and Rory, a pre-nursing student at Oregon Tech, is 23 – she’s kept things simple, offering meals from 10:30 a.m. to 2 p.m. Mondays through Fridays.

Deciding to open a restaurant took some nerve. She had a teaching degree, but that career didn’t catch her fancy. She was in her third term of nursing school at Kansas State when she “realized how much I hated that” and gave up her scholarship.

Waterman-Raye credits her family with helping to make business ownership a reality. Her parents, Webb and Carol Waterman, came from Kansas with friends to help paint and upgrade the space that houses her restaurant. The man who became her husband, Chad Raye, designed and created the decorative fish images on the tables and the iron mermaid hanging near the front door.

Her sister, Cathy Waterman, did the paintings.

“It was definitely a family effort,” she said. “It takes some desperation to make it successful.”

Since then, the five-days-a-week routine has been her effort, and her success.

She originally wanted to name the café Webster’s after her father, “but I thought that sounded too much like a bar and grill.” The name “Mermaid Garden Café” came to her after and a friend created the distinct mermaid mosaic.

“I just built the name around that” she said.

Her work days often began at 4 a.m. and end 12 hours later. During the years her sons lived at home, she arrived early to make sconces and coffee, then returned home to help send the boys to school. Then it was back to work. Because she’s the cook she still keeps long hours.

Until the COVID-19 pandemic, Waterman-Raye had three part-time helpers. While she regards all three as “family,” the resulting loss of business means her sole remaining employee is Kathy Brown.

“I like to refer to her as my manager. During my busiest times, times when I want to cry and quit my job, she says, ‘Keep going. It’ll be OK. Keep going.,”

Waterman-Raye plans to keep working. Her whole career she has kept her recipes to herself, but maybe when she closes up the shop for good, she’ll be ready to spill the beans.

“I always say when I retire I’ll write a cookbook,” she said.