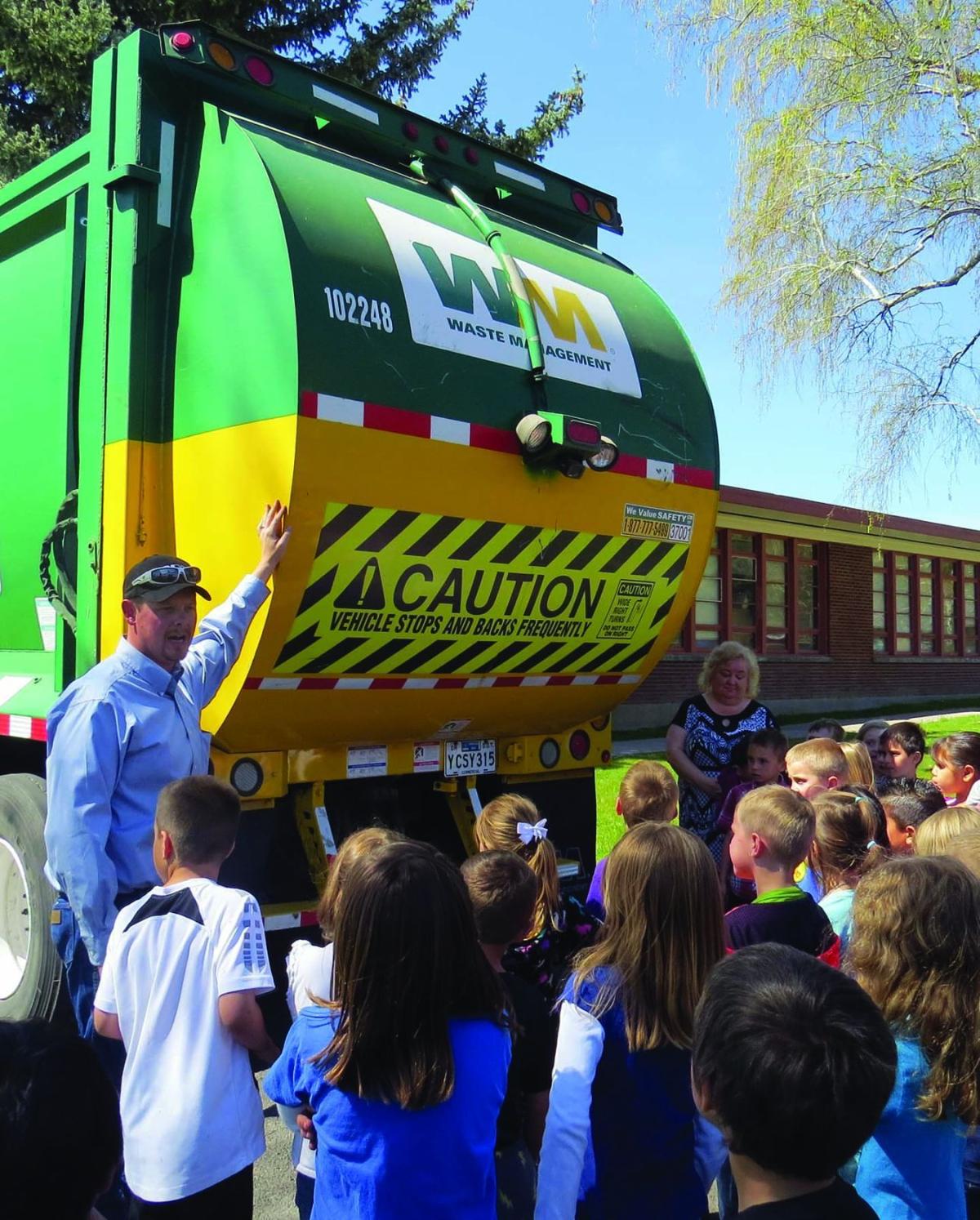 Waste Management’s Recycling Outreach Coordinator Jeremy Renner shows off the Klamath Falls’ recycle truck on Wednesday at Peterson Elementary School. Education is one of the components about promoting right recycling habits, according to Renner.

A heavy machinery operator drops a load of recycleable materials into the baler at REACH, 1812 Maywood Drive, Klamath Falls, on Wednesday. 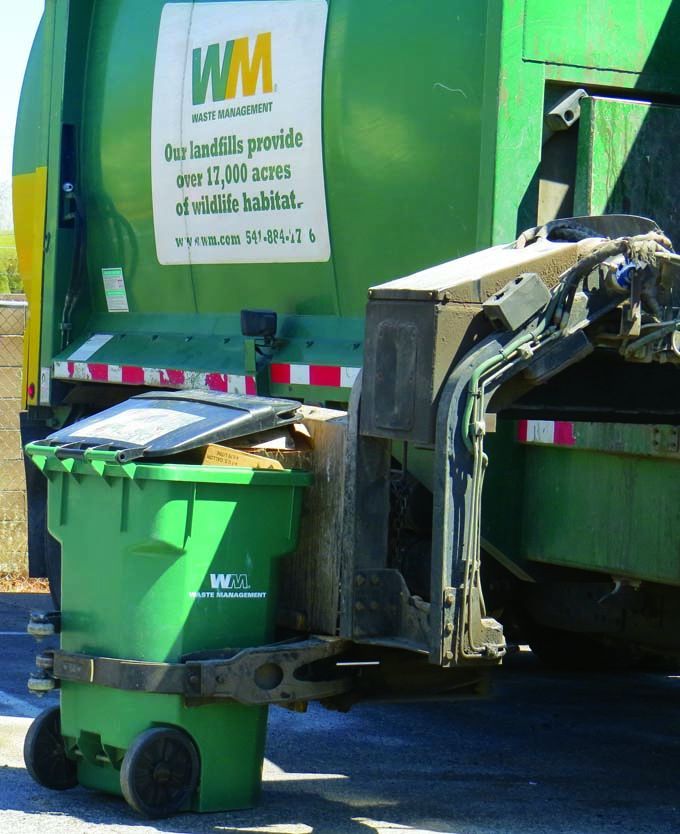 Waste Management personnel demonstrate use of one of their three recycling trucks on Wednesday. 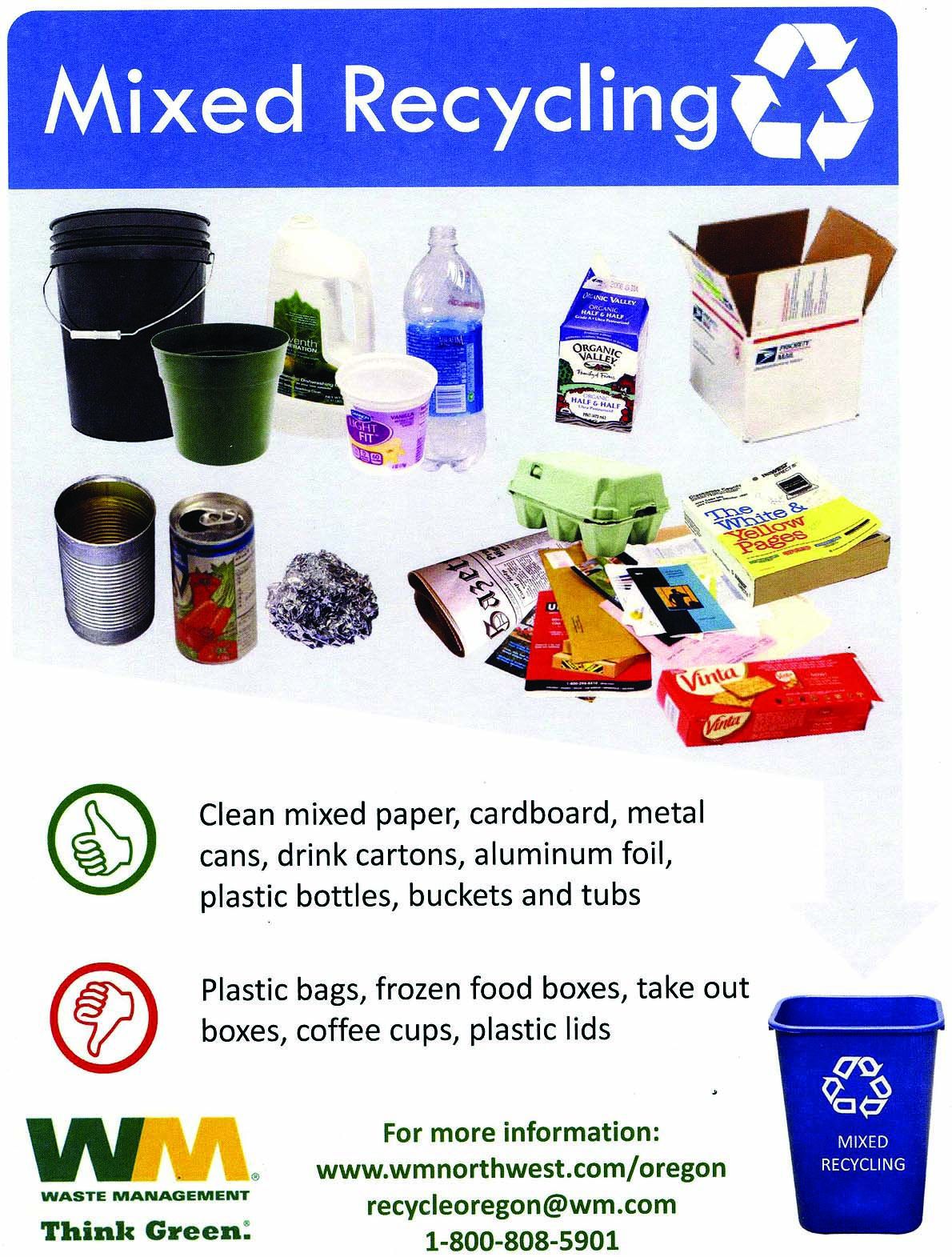 REACH packages about 400 tons of recycleable materials each month, before sending them to Clackamas for sorting.

Waste Management’s Recycling Outreach Coordinator Jeremy Renner shows off the Klamath Falls’ recycle truck on Wednesday at Peterson Elementary School. Education is one of the components about promoting right recycling habits, according to Renner.

A heavy machinery operator drops a load of recycleable materials into the baler at REACH, 1812 Maywood Drive, Klamath Falls, on Wednesday.

Waste Management personnel demonstrate use of one of their three recycling trucks on Wednesday.

REACH packages about 400 tons of recycleable materials each month, before sending them to Clackamas for sorting.

First-graders in Laura Helms’ and Eugenea Campbell’s classes at Peterson Elementary School ‘ooh-ed and aaaah-ed’ as they filed out the back doors on Wednesday afternoon to find one of Waste Management’s recycle trucks parked near the school.

Jeremy Renner, recycling outreach coordinator for Waste Management, circled up with the two classes around one of Waste Management’s big rigs to explain the recycling process. The hope is that children then pass on their recycling know-how to their parents or guardians.

“The kids get to go around their class and collect garbage, and then we get to go through, and sort, what is and is not recyclable,” Renner said. “(I’m) trying to get some baseline education with the children in hopes that the kids can go home and educate mom and dad some, too.”

Waste Management adopted a campaign mantra, “Recycle often, recycle right” about one year ago, Renner said, a phrase that reflects not only the need to recycle, but to recycle the right materials. It’s a motto the company uses to help spread awareness about recycling, from the classroom to the boardroom, and beyond.

“We’re trying to help explain more and break it down and make it more simple to make sure people properly recycle,” Renner said.

And promoting proper and updated recycling habits on the company’s label, which displays appropriate and inappropriate recyclable materials, is also key for Waste Management. The company is in the middle of implementing its new, glossy label for recycle carts. Margarine tubs, 5-gallon buckets, and yogurt containers have been added to the list of recyclable materials.

“We used to say you can’t have those,” said Ben Hirengen, district manager for Waste Management. “I couldn’t justify getting 15,000 new lids because we added two materials. But we did get stickers so we could then label everything properly going forward.”

Waste Management aims to educate the public about how and what to recycle through businesses, as well.

“We’ve tried to go out into businesses to help educate them and teach them not only the benefits of recycling, but there also is a value aspect,” Renner said. “They can save money by producing less garbage and more recycle.”

Waste Management has a list especially for businesses that displays the do’s and don’ts of recycle at establishments, available at their office on Maywood Drive. For example, styrofoam isn’t accepted, but copy paper and magazines are welcome. Plastic take-out containers aren’t recycleable, but cardboard and phone books are suggested for recycle.

There are lists of recyclables acceptable for apartments and condominiums, and businesses at the Klamath Falls Waste Management office, 1812 Maywood Dr., Klamath Falls.

As Earth Day approaches, Ron Moe emphasized the day, which falls on Wednesday, is celebrated somewhat every day by having the recycle process in play at the REACH facility, 1812 Maywood Drive.

“Every day is Earth Day for us,” Moe said. “As a company, we’ve made the decision to recycle because it’s the right thing to do.”

Moe oversees program participants at REACH, which helps enable those with barriers to employment the chance to gain job skills necessary to enter the broader work force. Program participants bale about 400 tons of recyclables per month, and the company hopes to double that capacity in the future, Moe said.

“Waste Management owns their own recycle, and we’re just doing the logistics of it for them,” he added. “We just package what they send us, and we ship it off. As we go to sorting it, anything that’s not recyclable, we’re going to have to pay to dump it somewhere. So, public education about recycling is important.”

Moe emphasized more individuals are asking how to recycle than whether they should recycle.

“For the most part, people want to do it right. They want to recycle anything that can be recycled.”

No to kitty litter

During a walk-through of the facility on Wednesday, some non-recyclable materials were apparent, such as a gardening hose, a lawn chair, a package of raw hamburger, and a TV that stood out from empty milk jugs and piles of cardboard.

Top of the mind

Waste Management Route manager Barry Thompson emphasized parents should keep an eye on their children when they recycle, and promote the best practices when they, themselves recycle.

“Parents will allow their children to run their recycling program at home,” Thompson said, speaking from experience with his kids.

“A little bit of time from the parent’s standpoint, talking with their recycling managers at home would help.”

Thompson emphasized he’s seen progress with recycling in the Klamath Basin since coming to Waste Management in 2007, when he felt recycling was more of an afterthought to some.

“Now it’s kind of at the front of everybody’s mind,” Thompson said.