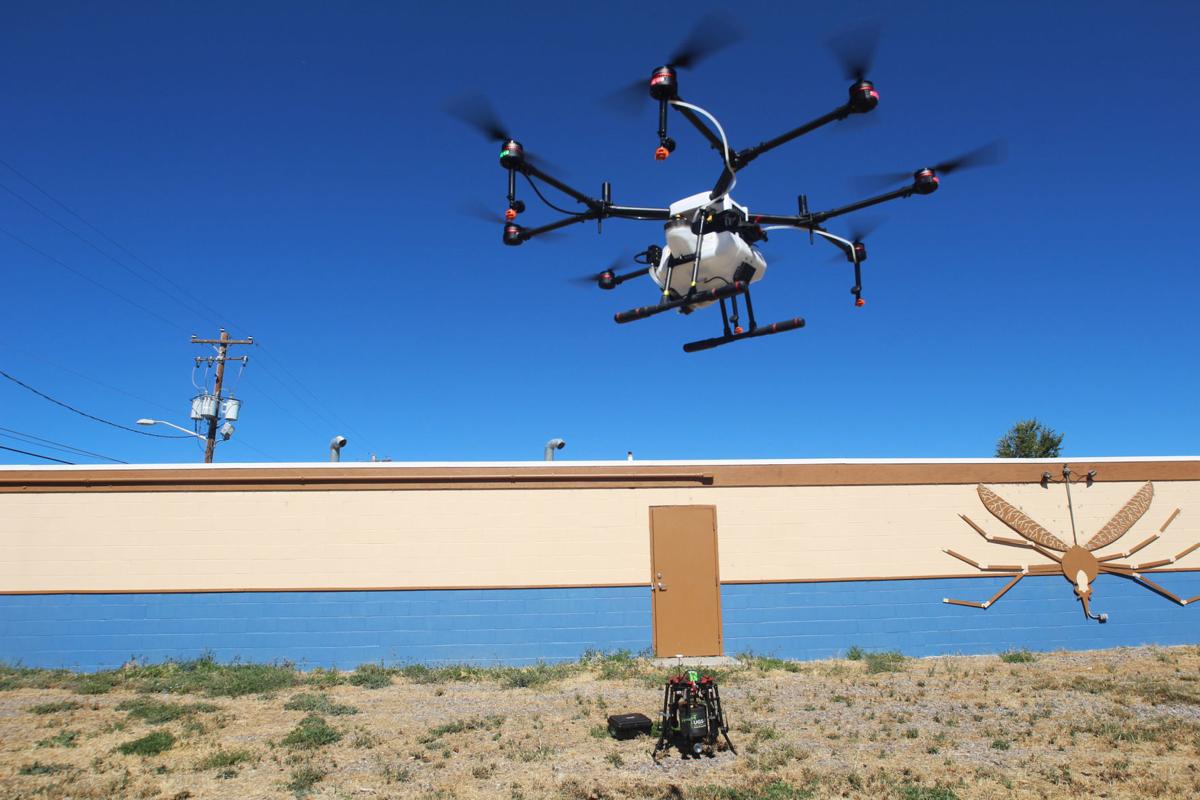 A specialized drone with spray nozzles capable of distributing pesticides in otherwise unreachable areas is operated by Three Rivers Mosquito and Vector Control in Klamath Falls, Ore., the first company in the nation authorized by the Federal Aviation Administration to spray via drone. 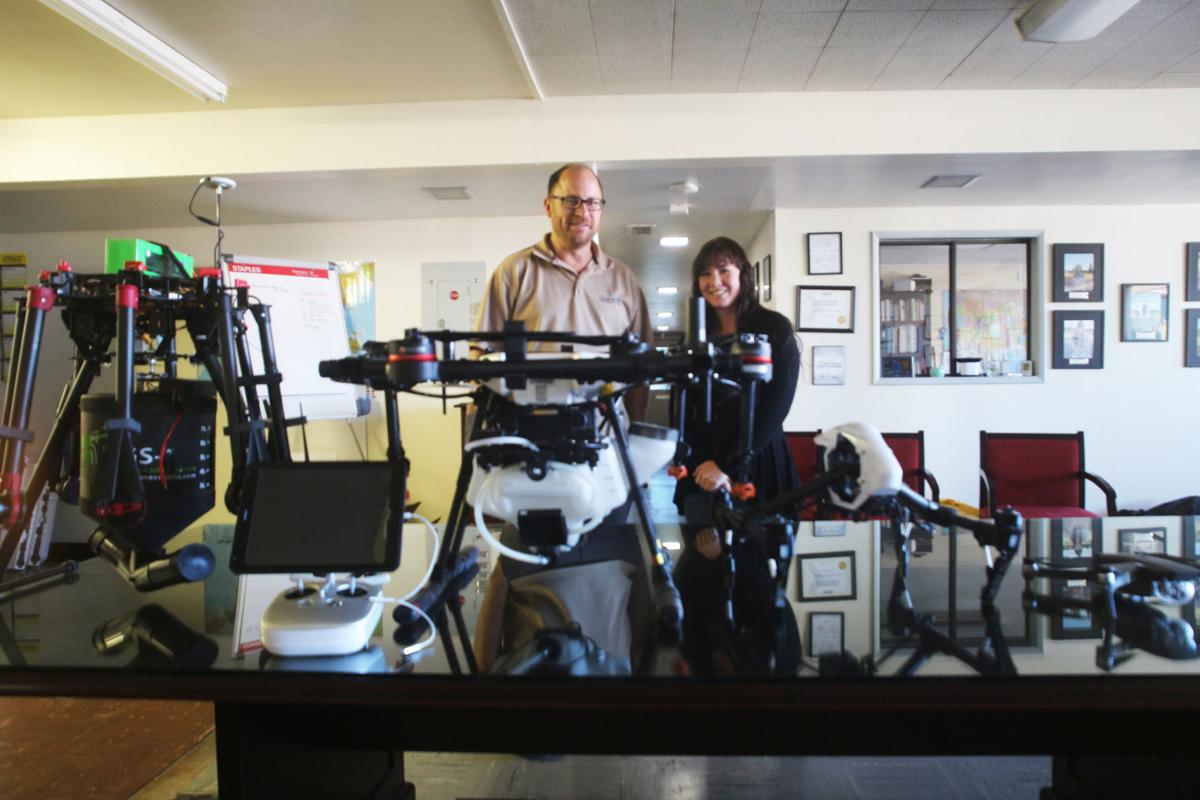 Ed Horvath and Danta Smith, of Three Rivers Mosquito and Vector Control in Klamath Falls, Ore., display their collection of various-sized drones that are used for aerial photography or pesticide application across the Pacific Northwest. 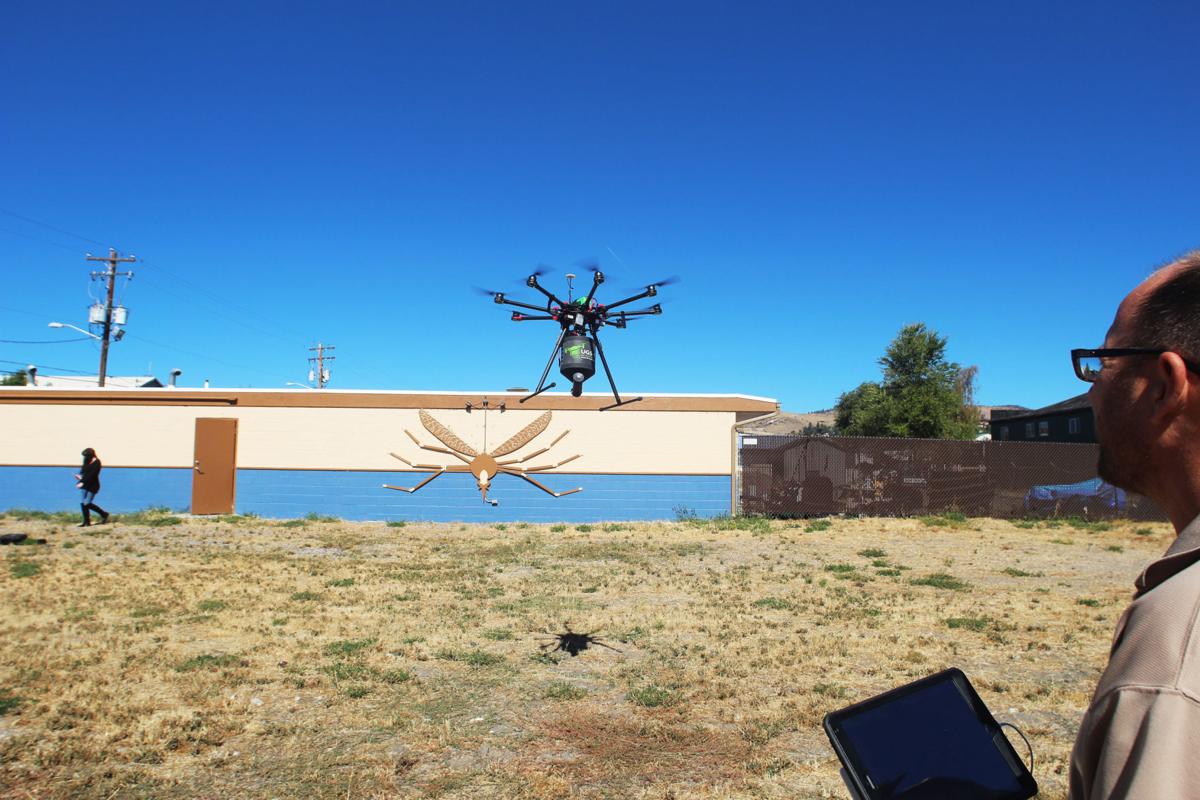 A specialized drone with spray nozzles capable of distributing pesticides in otherwise unreachable areas is operated by Three Rivers Mosquito and Vector Control in Klamath Falls, Ore., the first company in the nation authorized by the Federal Aviation Administration to spray via drone.

Ed Horvath and Danta Smith, of Three Rivers Mosquito and Vector Control in Klamath Falls, Ore., display their collection of various-sized drones that are used for aerial photography or pesticide application across the Pacific Northwest.

New technology is aiding the ongoing effort to reduce disease-spreading pests in the Klamath Basin — and the company offering the service is the first in the country licensed to do so.

Specialized drones capable of spraying pesticides or spreading granular insecticides are the newest tools being implemented by Three Rivers Mosquito and Vector Control — a family-run business in Klamath Falls that services much of the Pacific Northwest, and is the first to be licensed by the FAA nationwide to use drones for this purpose.

Established initially in 2002, then revived again in 2012; the in-demand work of reducing mosquito populations and other pests for disease prevention and human comfort has typically been a messy process. It has traditionally involved handling chemicals and application of pesticides by hand or vehicle, often necessitating trudging through mud to reach swamps and ponds where larvae breed.

Trial and error from the ground

For company operators Ed Horvath and Danta Smith, finding alternatives to large-scale fogging of chemical clouds and more environmentally friendly means of applying chemicals in a feasible manner has been a multi-year pursuit.

First they tried using ATVs and trucks to reach trouble areas, then considered an Argo ATV that would be better suited for accessing difficult-to-reach locales. A year ago, Horvath realized that drones could access areas that couldn’t otherwise be reached on foot, and would be able to apply insecticides by a much more targeted means thereby reducing the amount of chemicals being added to the environment.

“We started all by hand and truck application, then upgraded to ATVs but even ATVs couldn’t get everywhere we wanted,” said Horvath, director and vector ecologist for Three Rivers. “County governments have used helicopters and airplanes, but I saw that as a waste of money, so we looked into drones and found out that while they’ve been used for spraying in China for years, nobody has been doing it here at all.”

Drone technology has been rapidly growing in recent years, moving beyond recreational or photographic use to more practical purposes. Companies such as UPS and even Chipotle are testing drone delivery concepts, law enforcement and other government agencies are starting to embrace the technology for their purposes. In Asia drones equipped with flame-throwers burn debris off of high-voltage power lines, and in Dubai flying drone taxis are already in service.

While vector control via drone is a growing industry in Asia, Three Rivers is the first to gain permission to do so in the U.S. — an unprecedented process that at times left Three Rivers and the Federal Aviation Administration (FAA) confounded as to how to progress.

Aerial attack of chemicals designed to reduce mosquito populations for disease prevention is not new, but drone use allows much more precise attack on breeding grounds of ponds, swamps and standing water sites rather than a large-scale fog approach used with airplanes and helicopters.

The custom drones acquired by Three Rivers spread granular pesticides or spray liquid chemicals, rarely doing so more than a few feet off the ground at any time for maximum effectiveness of the application.

“We started off just taking pictures, I called around asking if drones could be used to spray and was told there was no legal way to do it,” said Horvath. “We started researching it, and got licensed to fly drones, but Part 137 required a commercial pilot license. The FAA didn’t know what to do either because nobody had done this before.”

A multi-month process began with Horvath and Smith collaborating with the Oregon Flight Standards District Office (FSDO) in Hillsboro and the FAA to determine proper waivers, rules and regulations.

Specialized drones were acquired capable of completing the task, costing upwards of $20,000 each, purchased in cooperation through grants with Chiloquin Vector Control District — one of Three Rivers’ primary clients.

While not the first in the country to consider it, Three Rivers through a seven-month process became the first to be approved by the FAA for vector control drone spraying.

“The FAA wasn’t sure how to test us — we had to submit our own rules for training, so we made our own set that now the FAA is following,” added Horvath. “The local FSDO was really excited though, I guess they wanted to be the first.”

While Three Rivers provides vector control services across Washington and Oregon, the acquisition of drones was largely an effort through Chiloquin, which faced a difficult economic decision in continued vector control district operations.

“The use of drones fascinated us, because we have one of the smallest budgets in the state,” said Dennis Jeffcoat, chairman of the Board of Trustees for Chiloquin Vector Control District.

“The cost of labor is skyrocketing, and we saw that we could be placed out of operations unless we found a better way to apply materials. The rise of chemicals and labor exceeded our budget, we needed to find an alternative method.”

The switch to drone use, according to Jeffcoat, did initially cause some public privacy concerns, but Horvath noted that his specialized drones don’t even have cameras on them.

“We’re not designed to take over for crop dusters, we’re more specific,” said Horvath. “A 100-acre field may only need to be treated for 1 to 2 acres, by taking this approach we can spray a small spot rather than the whole field. Helicopters and airplanes will also put out three times as much chemicals as we need.”

According to Horvath, it takes about 15 minutes to treat one acre, with application of one tank of pesticides lasting about as long as a single charged battery does for each flight. To supplement drone services, Smith has also expanded Three Rivers into aerial photography for clients incorporating mapping and surveying.

“Our main goal is to reduce disease and discomfort for humans and health issues,” said Smith. “If we can treat a small area without having to fog, or do granular application that doesn’t leave chemical residue, it’s better for the environment.

“We don’t have to do it the way other companies do where they just fog everything with chemicals — we rarely fog in places like Chiloquin that used to fog three to four times per week. Our goal is to reduce the amount of chemicals used.”

That reduced chemical application is not only a goal of Jeffcoat, who along with the district board have strived to consider best practices and all-natural substances whenever possible to reduce environmental harm, but has had a tangible, positive effect on other species in the area.

According to Horvath, the Chiloquin area has seen a resurgence of mayfly and caddis fly populations since fogging was reduced.

“We are never going to get all of the mosquitoes, but it’s a matter of getting it to a comfortable level where people can still go outside and not have health risks,” added Smith. “We want people to enjoy being outside without having to risk West Nile virus or other diseases, but we don’t have to eradicated everything else in the process.”

“Some may say mosquitoes are part of the food chain too, but if you’ve been down to the lake there’s no shortage of midges,” laughs Horvath.