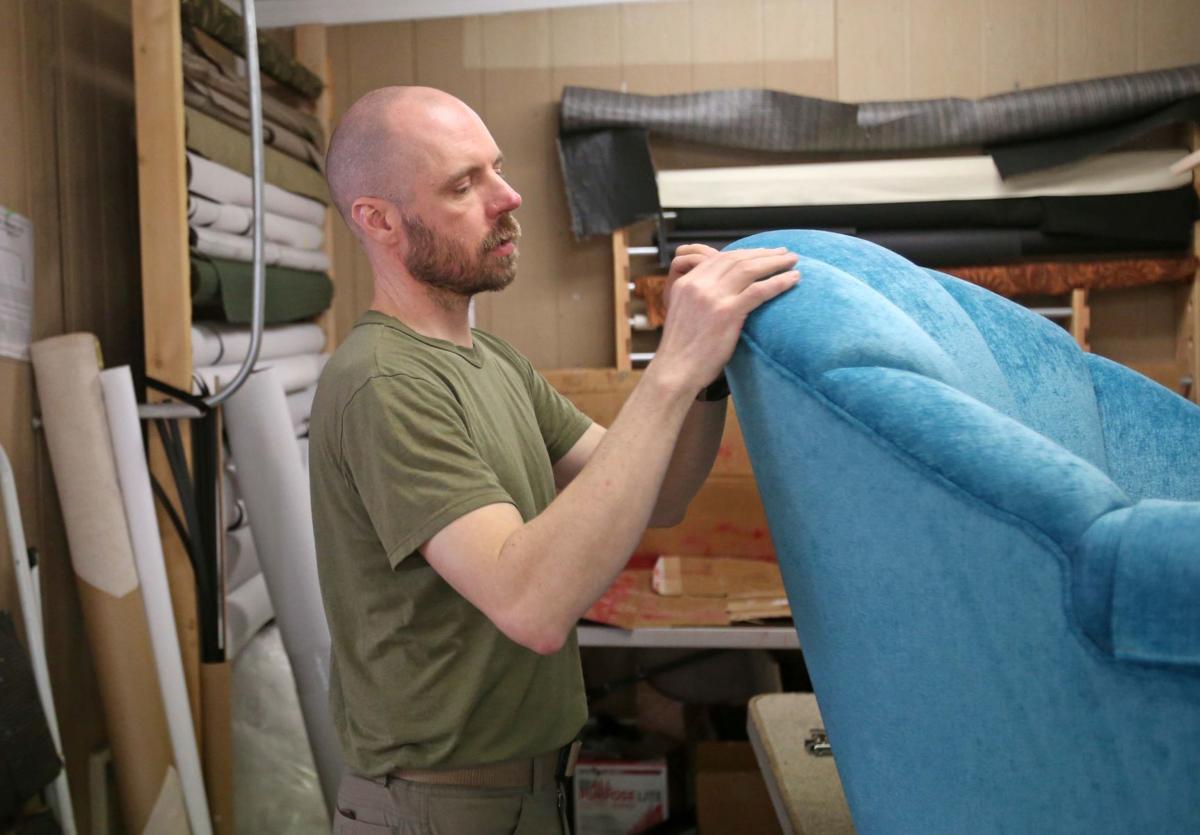 Ben Fox, owner of Foxy Stitches Upholstery, inspects the fabric of his latest work project in his shop off Gearhart Street Wednesday, March 7. 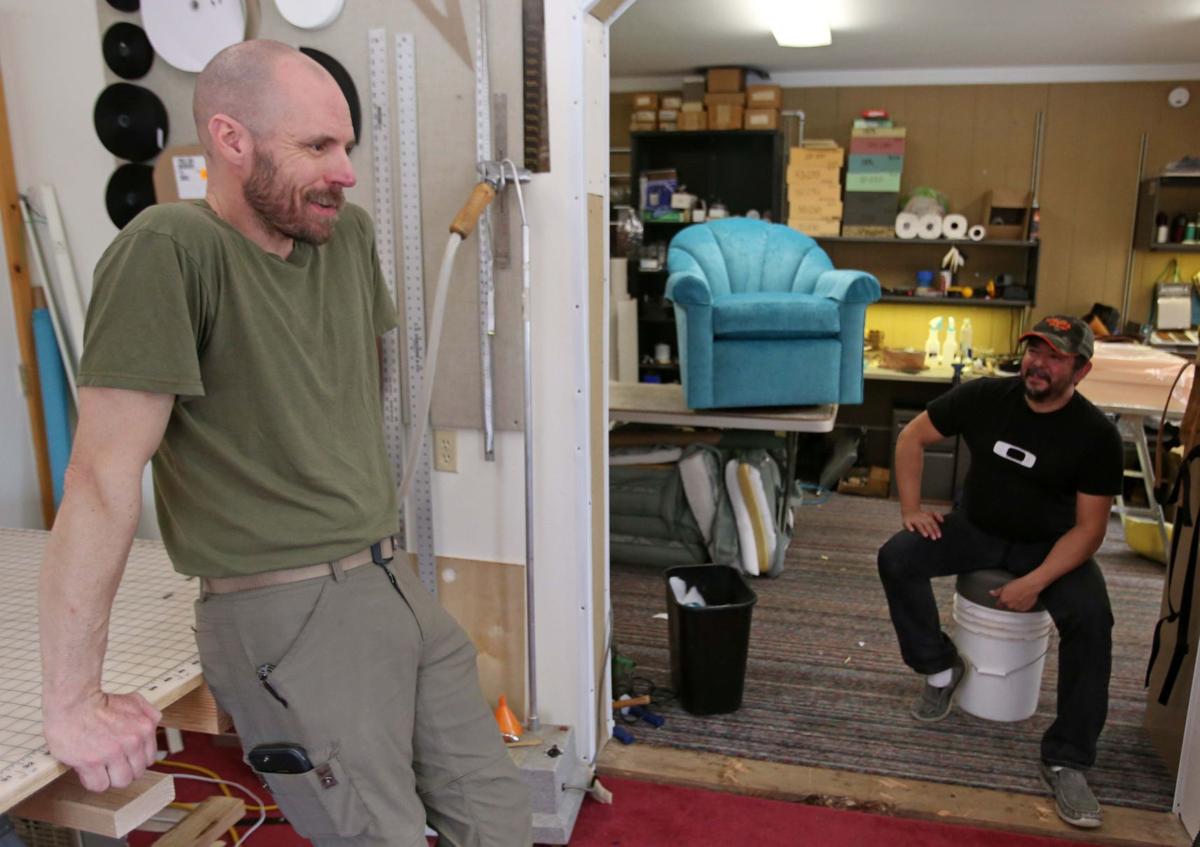 Ben Fox, owner of Foxy Stitches Upholstery, and colleague Tom Luna reflect on their projects and challenges during their times as craftsmen at Fox’s Gearhart Street shop Wednesday, March 7. 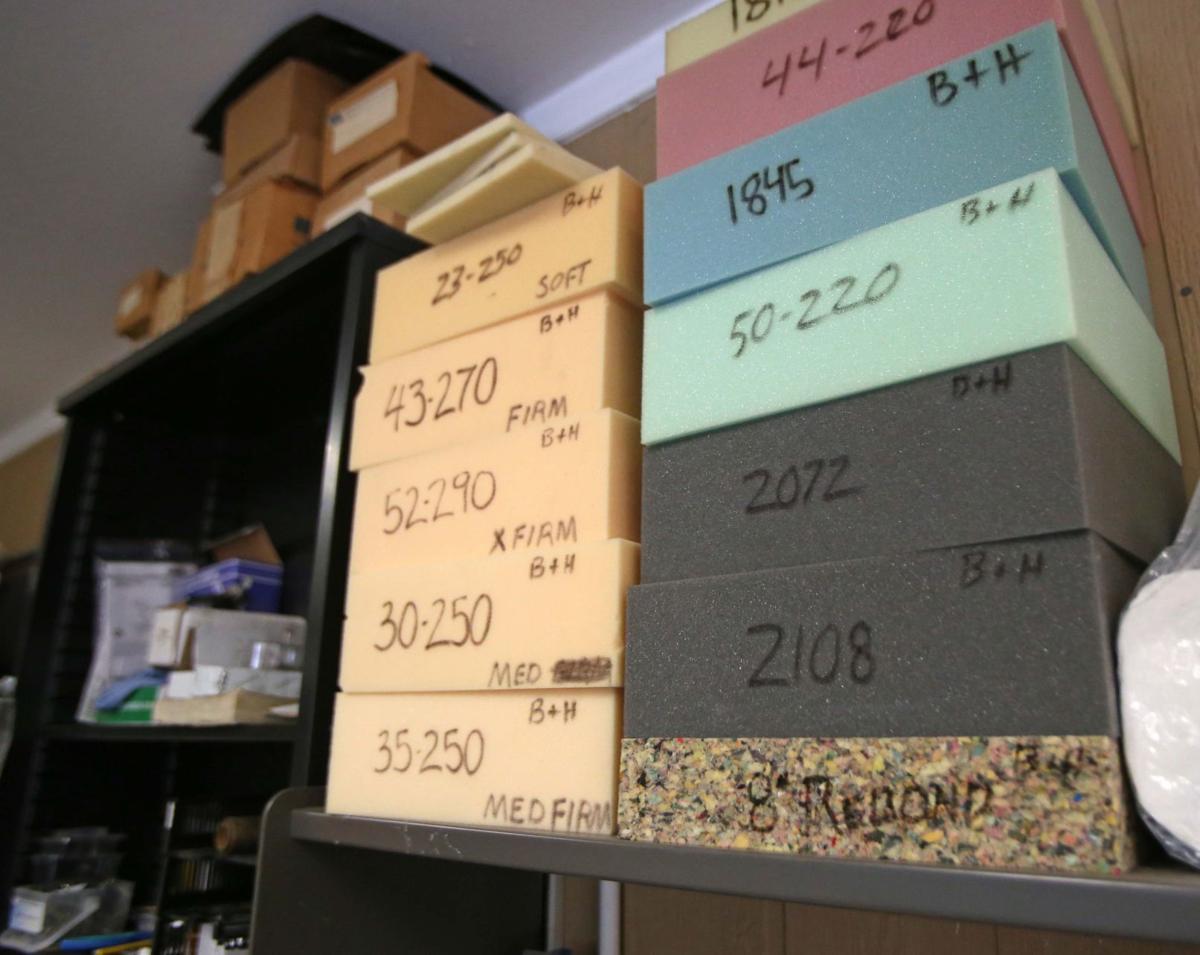 Rows of foam block materials commonly used to cusion seats and furniture sit stacked on shelves at Foxy Stitches Upholstery just outside of Klamath Falls. Ben Fox, owner at Foxy Stitches, said he has been known to sell separate materials for anyone interested in buying them.

Ben Fox, owner of Foxy Stitches Upholstery, inspects the fabric of his latest work project in his shop off Gearhart Street Wednesday, March 7.

Ben Fox, owner of Foxy Stitches Upholstery, and colleague Tom Luna reflect on their projects and challenges during their times as craftsmen at Fox’s Gearhart Street shop Wednesday, March 7.

Rows of foam block materials commonly used to cusion seats and furniture sit stacked on shelves at Foxy Stitches Upholstery just outside of Klamath Falls. Ben Fox, owner at Foxy Stitches, said he has been known to sell separate materials for anyone interested in buying them.

Now he takes roughly four to five calls a day, which often lead to new projects as well.

“I just got slammed with work,” Fox said, who now owns and operates Foxy Stitches Upholstery outside of Klamath Falls.

Fox, who first opened shop in June, just recently completed work on seats in an experimental aircraft, along with a corporate jet that he and his colleague, Tom Luna, worked on for months. Foxy Stitches Upholstery was also selected for a $3,400 Klamath County economic development grant for the purchase of equipment and marketing.

Fox and Luna are both left-handed craftsmen, which makes their pairing even better.

“That was a major kicker there for Tom,” Fox said. “He was really gung-ho to show up when he found out everything was left-handed.”

As a child, Fox said he often used his mom’s sewing machine to fix up his own clothes, which sometimes did not fit right. Fox said that his admiration for Batman’s utility belt also led to attaching custom pouches and sheaths on his own belts and packs over time.

“I’ve been breaking my mom’s sewing machine since I was a little kid, basically,” Fox said.

Fox previously spent 20 years at various service jobs, including cabinet shops, but never had his own run at the upholstery market until now. Fox said his skills elsewhere, which range from technical drawings to cabinet-making, have led him to become a better upholsterer.

Meanwhile, Luna’s experience in the business runs in the family. His father, Tom Luna Sr., had a 36-year upholstery career that involved creating furniture for celebrities, politicians and other celebrities.

“He was like a tailor for furniture,” Luna said of his father.

Luna more recently worked with foster homes and group homes for children with disabilities. Though he’s back in the upholstery gig, Luna said he still has other social service side jobs in the afternoon.

As a nearly lifelong upholsterer himself, Luna said he has taken notice of Fox’s dedication to the craft and the hours he spends in his shop.

“He’s here all the time,” Luna said. “He’s always working on something.”

From fine stitching to fabric patterns, Fox and Luna said they like to add custom touches on everything. Fox often focuses more on automotive and aviation projects, while Luna has a penchant for touching up furniture and antique pieces. Growing up around the business, Luna said he was thrilled to join Fox on his endeavors.

Most projects, depending on size, could take between eight and 12 hours or more to complete. The group’s most recent accomplishment was an eight-passenger jet remodel for a Raytheon Hawker 800XP, which both upholsters considered a unique challenge. The project started in November 2017 and took several months to finish.

“That was a tough one,” Fox said. “It was a British aircraft and everything on it was hand-made.”

Fox and Luna often bounce ideas back and forth depending on the project and what people request.

Fox and Luna said that their services come at a time when other upholsterers have either left or retired. Bill’s Auto & Furniture along Shasta Way is one of the last shops left.

“He actually had identified a market for the aviation industry to be able to do upholstery if he had a better machine to do it,” Riley said.

Bill Watson, who runs Bill’s Auto & Furniture, said he was supportive of Fox opening shop, adding that he “seems to be doing good work.”

“That’s what we need around here,” Watson said.

In the meantime, it’s business as usual for the busy upholsterers as the calls keep coming in.

“It’s like Ben said — it comes down to need here in Klamath,” Luna said. “We have the skills to do it.”

Foxy Stitches Upholstery will host demonstrations at the upcoming 43rd Annual Home and Garden Show at the Klamath County Fairgrounds. Foxy Stitches demos will feature work on a custom children's chair that they plan to raffle off at the show.

There will be some 70 vendors at the Event Center.