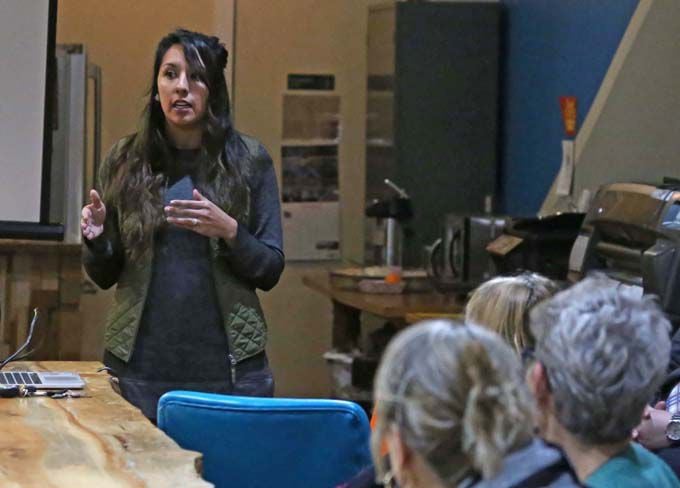 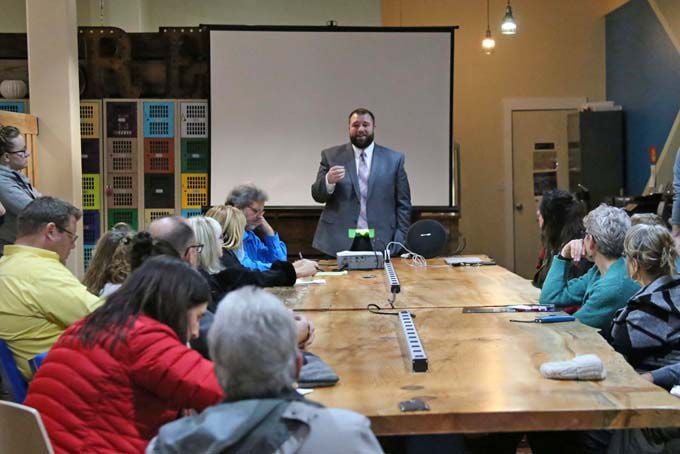 Nicholas Phair, president of the Klamath Falls Downtown Association, gives updates to dozens of downtown business owners and residents at their first meeting of the year Wednesday evening.

Nicholas Phair, president of the Klamath Falls Downtown Association, gives updates to dozens of downtown business owners and residents at their first meeting of the year Wednesday evening.

But the growing, yet aging downtown could still add some perks, such as student discounts and events, in an effort to appeal to younger populations and students who attend Oregon Institute of Technology, according to Jennifer Massey, an OIT student who worked with Klamath Falls Downtown Association to research what area students want.

The Klamath Falls Downtown Association (KFDA) held its first meeting of the new year Wednesday evening, which had more than 30 people show up to learn more about the growing association’s role in the revitalization of the city’s Main Street culture.

Massey’s presentation, which covered topics from shopping preferences to concerns about homelessness in the area, took relevant data from more than 250 Oregon Tech students to draw conclusions on what KFDA could do next as they step into the new year.

Brenna O’Sullivan-Fulks, KFDA executive director, said that the first few days of 2018 have been strong for downtown Klamath Falls. She hopes to continue their efforts, which would include more topic speakers like Massey, to help them grow.

“We’re really going to a back-to-basics approach in working with downtown businesses and identifying what their needs are,” O’Sullivan-Fulks said.

Reaching out to students

Massey, whose data involved a more extensive look into nine questions on an electronic survey, said she focused primarily on Klamath Falls OIT students. The overall response rate was about 7.4 percent, which Massey said gave her 95 percent confidence in the info she presented Wednesday night.

Massey’s survey did not focus on individual businesses or business models, but rather downtown Klamath Falls as a whole. Questions ranged from favorite downtown activities to ways they could make downtown feel like a safer location at night.

“Everything kind of landed right in the middle,” Massey said. “It shows that there’s room for improvement to meet the needs of these students.”

But Massey said that those who answered also had concerns about having more police patrols at night to increase safety, or possible student discounts at shops. Massey described how an increased burden on student finances made even the smallest discounts significant.

O’Sullivan-Fulks, who worked with Massey over the summer, said she really appreciated the survey results. O’Sullivan-Fulks said efforts such as Massey’s would work well with their own continued goals.

“The community can come together to work toward a solution,” O’Sullivan-Fulks.

Nicholas Phair, who spoke at the beginning of the meeting, was once again selected as president of the association. Phair touched on several new highlights of KFDA, which included establishing several new committees that could help support their objectives and adjust their own bylaws accordingly.

Phair said that these new steps would help them better align with the Oregon Main Street programs. In May 2017, Klamath Falls received a $100,000 grant to help restore upstairs apartments along the 600 block of Main Street. Talks are also still underway to construct The Esplanade, a city-funded project that would add retail and living spaces where the old Balsiger Ford building used to be.

“There are a lot of efforts that have been made with older historic buildings or other projects in order to revitalize downtown,” Phair said.