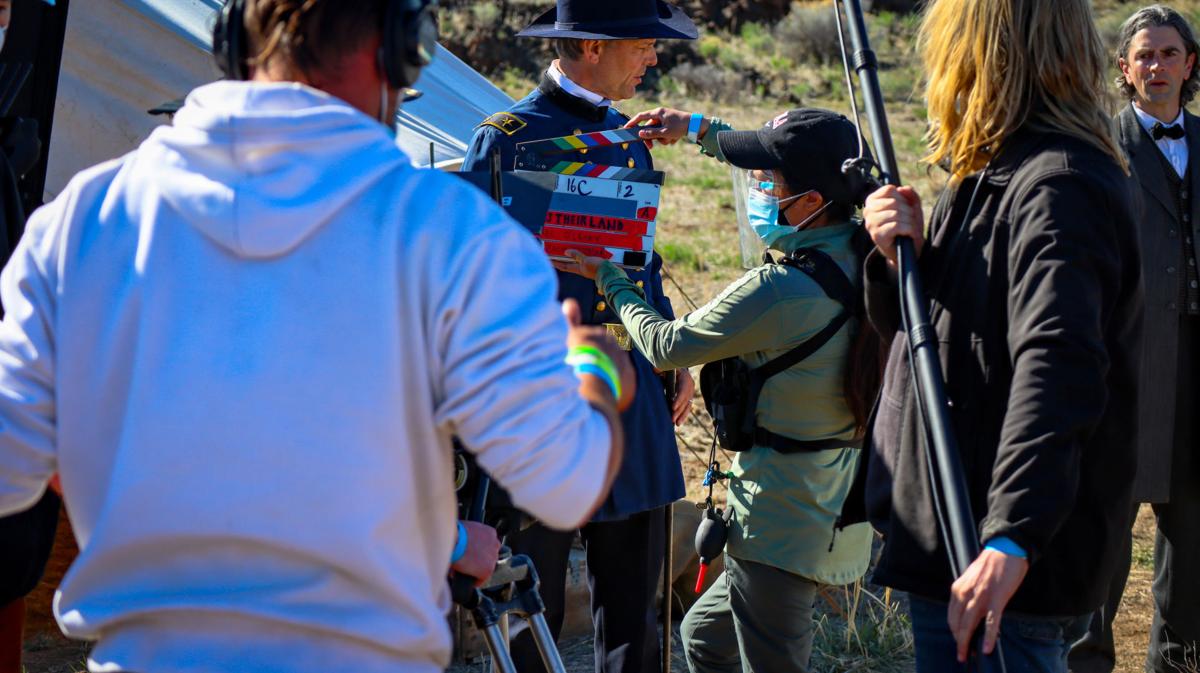 Cameras prepare to roll on production of the film “This is Their Land,” which Thursday wrapped filming after a week in the Tulelake area. 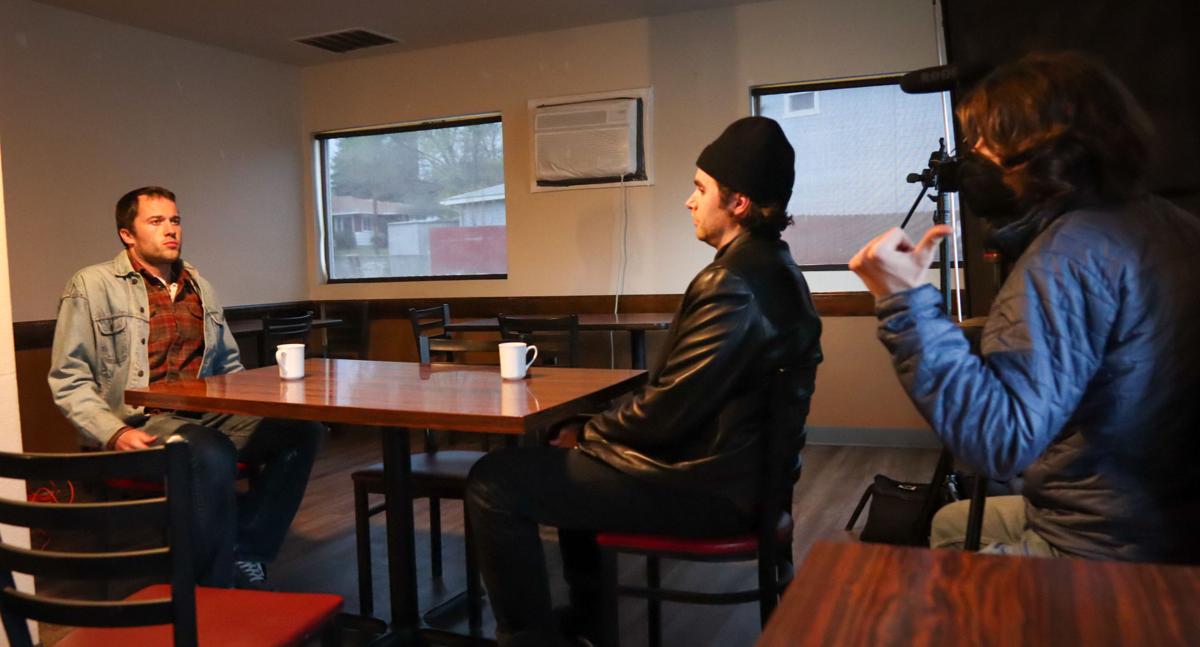 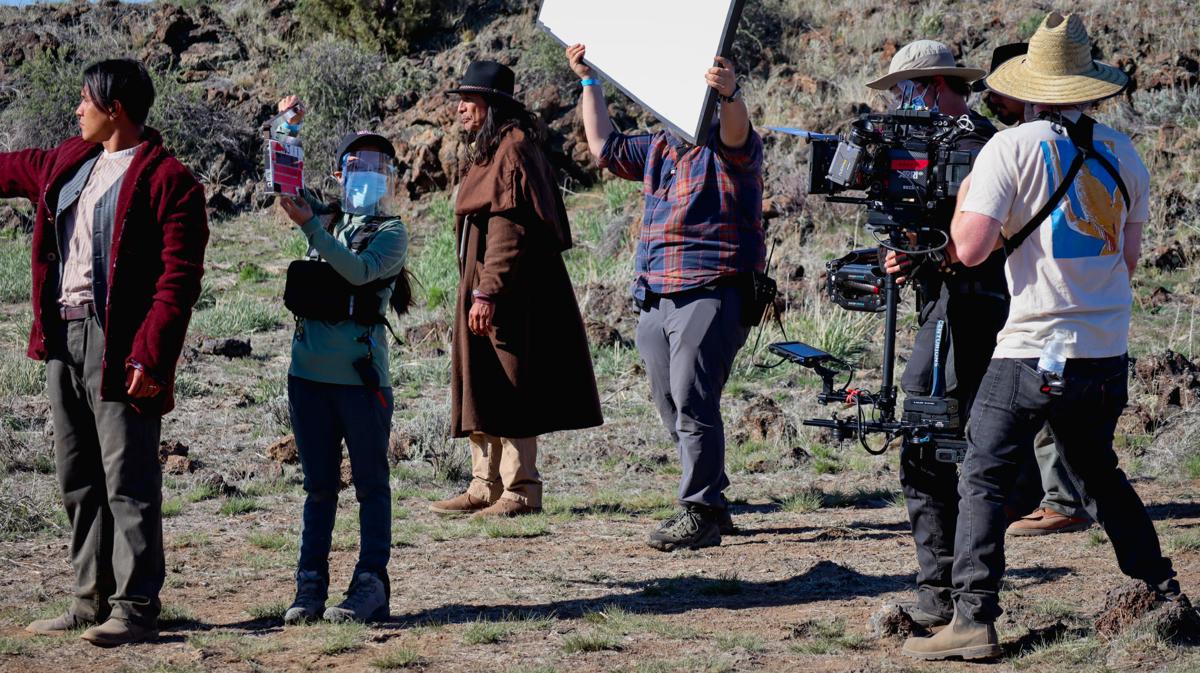 Actors prepare for a shootout during a climactic scene of the film “This is Their Land” which was filmed around Tulelake this week. 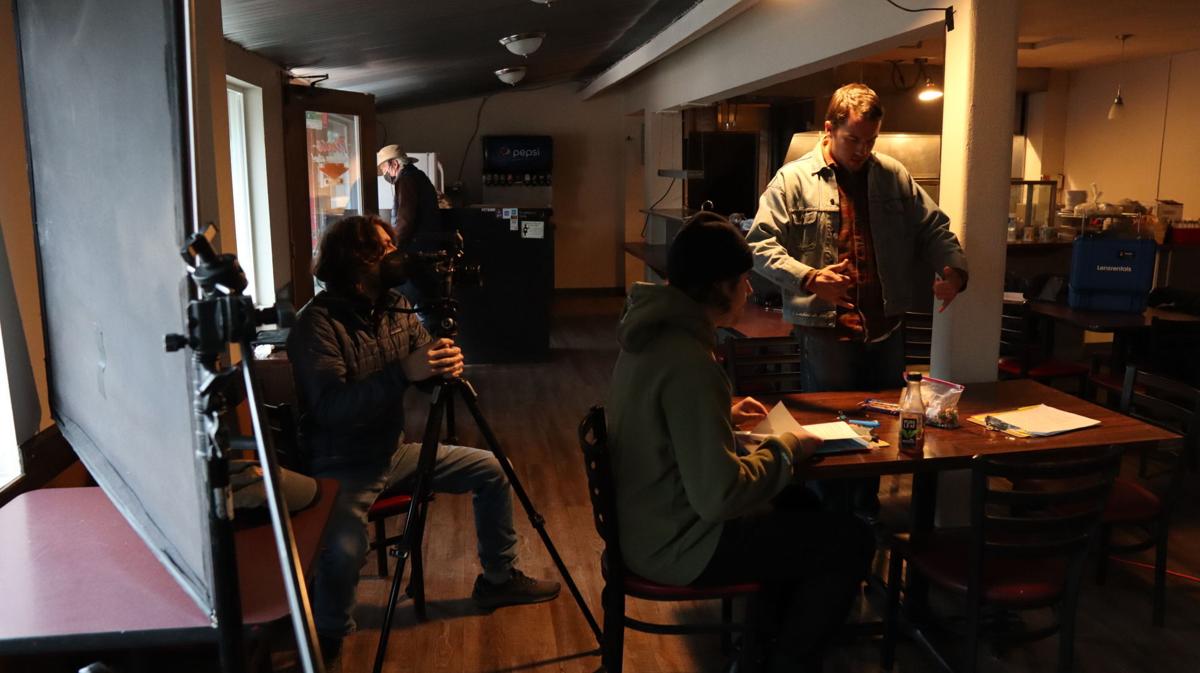 Actors do a table read for a scene in the film "Matterhorn," one of two films shot in the Klamath Basin this week. 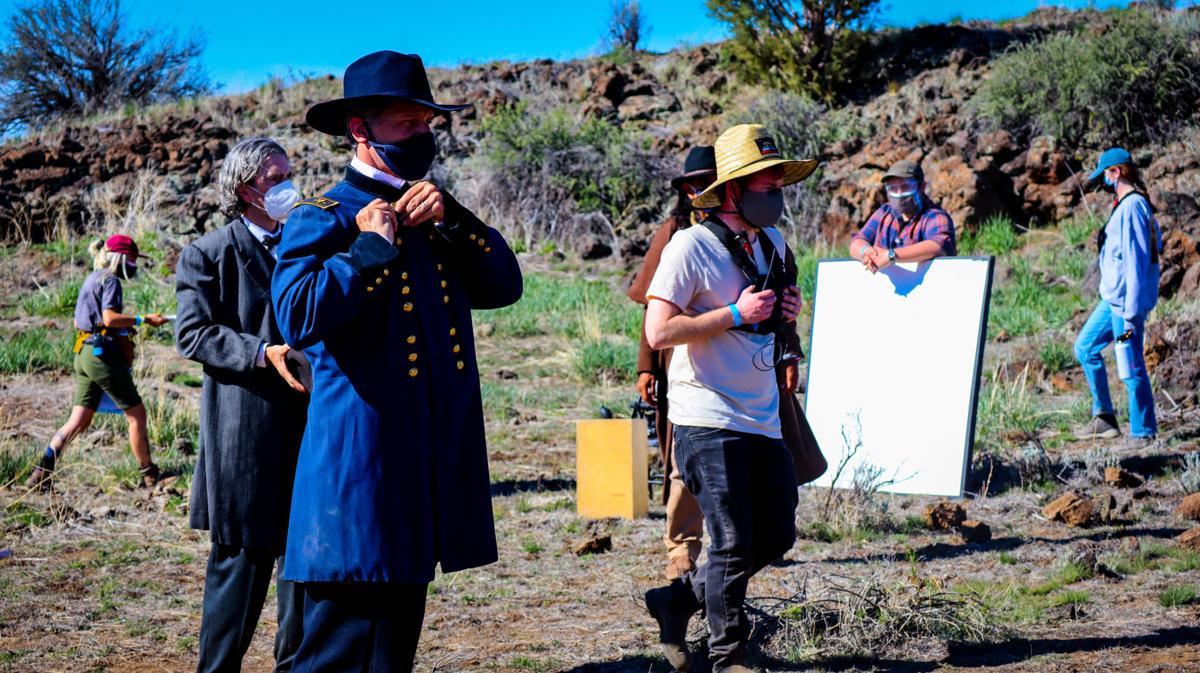 Actors and crew wear masks until the last possible moment before cameras roll while on set of filming of “This is Their Land” on the Ackley-Dry Lake Ranch this week. 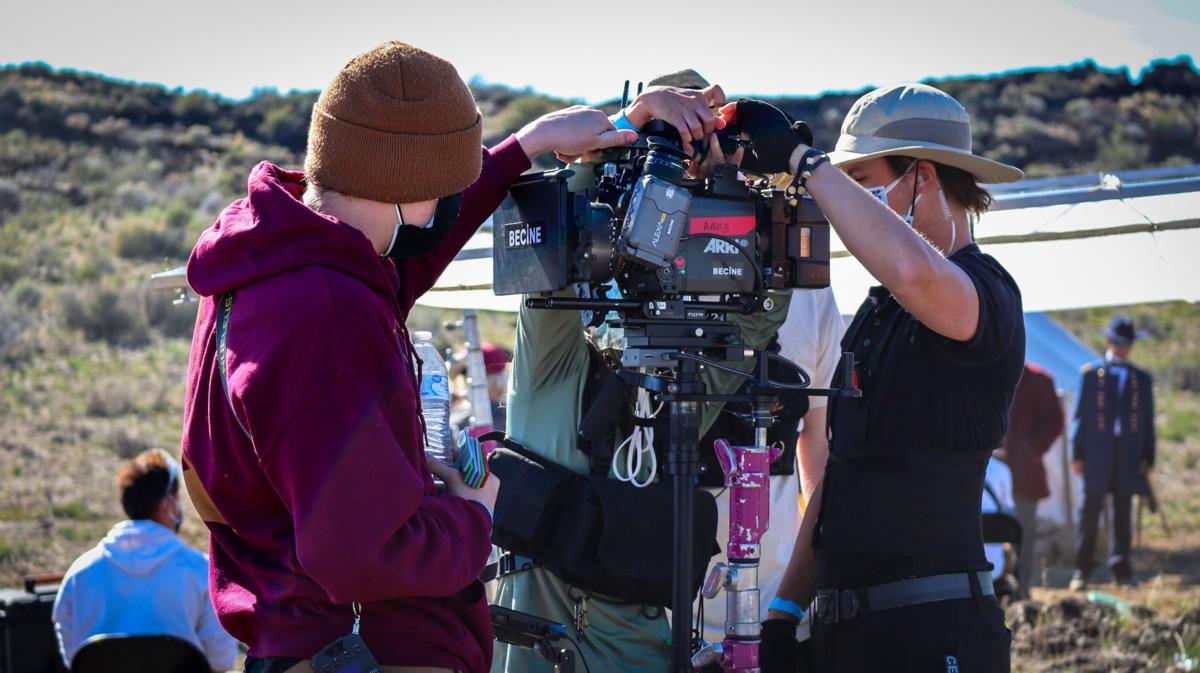 A Cal State Northridge student film crew prepares a steadicam for filming while on set of “This is Their Land,” shot this week at the Lava Beds and 9the Ackley-Dry Lake Ranch.

Cameras prepare to roll on production of the film “This is Their Land,” which Thursday wrapped filming after a week in the Tulelake area.

Actors prepare for a shootout during a climactic scene of the film “This is Their Land” which was filmed around Tulelake this week.

Actors do a table read for a scene in the film "Matterhorn," one of two films shot in the Klamath Basin this week.

Actors and crew wear masks until the last possible moment before cameras roll while on set of filming of “This is Their Land” on the Ackley-Dry Lake Ranch this week.

A Cal State Northridge student film crew prepares a steadicam for filming while on set of “This is Their Land,” shot this week at the Lava Beds and 9the Ackley-Dry Lake Ranch.

After a whirlwind week of filming the final scene wrapped April 29 for two films simultaneously shooting in the Klamath Basin last week.

They are the first two of multiple film productions planned for the region this year.

“This is Their Land,” a short film produced by Cal State Northridge students in the Tulelake area about the Modoc Wars of the 1870s, and a comedy-horror short film titled “Matterhorn” shot around Klamath Falls by a Los Angeles-based film crew completed production; but months of work remain before either film will be presented to audiences. Both productions arrived in Klamath Falls on Friday, April 23 for final pre-production planning and location scouting before cameras rolled, and despite an unexpected late-April snowstorm altering scheduled outdoor scenes, both projects managed to complete within their anticipated timelines.

“The weather messed with us, but the best part of the weather is that it was weirdly on our side the whole time,” laughed Roman Zaragoza, a co-producer and actor on ‘This is Their Land’, who previously has participated in the Oregon Shakespeare Festival in Ashland. “The first two days weather was gnarly, but we were shooting in caves so we were okay; now we’re shooting outside and it’s beautiful.”

“This is Their Land” recruited a cast and crew of students and industry veterans alike, adding some locals to the team to round out a production that included actors with film, Broadway theater, and Oregon Shakespeare Festival experience. The film was shot at Lava Beds National Park and the Ackley-Dry Lake Ranch south of Tulelake, while cast and crew stayed in Merrill and Klamath Falls. Production began with a blessing from representatives of Klamath Tribes, some of whom returned during the production to assist with dialect since a portion of the film’s dialogue is in the native Mukluk language.

“Our first day Taylor Tupper and Debbie Riddle, who are direct descendants of the characters in the film on the Modoc side, came and did a blessing for us – it’s been so beautiful to have their presence,” said Zaragoza. “Debbie brought images of Winema, who is her great-great grandmother; having that direct descendant on set put in perspective why we’re making this film.”

The production received assistance from numerous local organizations, while utilizing local eateries for catering and other services that aided in completion of the project. The Daily Bagel and Dutch Bros. in Klamath Falls provided breakfast and coffee for the film production team daily, while different regional caterers were utilized each day. Among the crew was also a COVID compliance officer, assuring that the closed set and any visitors followed proper safety protocols.

For Martin Hilligoss, the director and screenwriter of “Matterhorn,” the trip to Klamath County was a return to familiar grounds. Raised in Ashland and now a resident of Los Angeles and recent graduate of the prestigious USC film program, Hilligoss last year had two of his short films shot around Lake of the Woods selected for the 2020 Klamath Independent Film Festival. In addition to “Matterhorn” Hilligoss has been in pre-production since last year for a feature-length film tentatively titled “Wayward Son” that he plans to also film in Klamath County later this year. There are other projects in which Hilligoss is in various stages of development that he also intends to film in Klamath County in the near future.

A notably smaller team accompanied Hilligoss for “Matterhorn,” filmed with two accompanying actors from Los Angeles and his father, Larry Hilligoss, who also plays a role in the film. The short film was shot primarily at David’s Diner and the neighboring gas station on Oregon Avenue, as well as Everybody’s Vintage in downtown Klamath Falls and various sites along Dead Indian Road.

“It’s a thriller-horror-comedy, an eclectic mix of different things,” said Hilligoss of his latest venture. Hilligoss hopes to have the film edited in time for a world premiere at this year’s Klamath Independent Film Festival.

“The people were amazing to work with; David and his wife were incredible and Thomas at Everybody’s Vintage was fantastic to work with – it all worked out well,” said Hilligoss.

As for “This is Their Land,” timelines are more uncertain as to when Klamath audiences will be able to see the finished product. Many months of editing and additional fundraising is needed before the film makes its debut at the Cal State campus, likely next spring. Producers expressed hope in being able to have a Klamath screening of the film in 2022 during the Klamath Independent Film Festival in mid-September.

“For much of our crew this was our first time producing a project of this sized budget, but everyone has been so excited to be here,” said Zaragoza. “This is where history actually happened. There’s something so powerful about being in the spaces where it all happened and feeling the energy.”

Zaragoza noted that 2022, when the film will likely make the rounds at various film festivals, is the 150th anniversary of the start of the Modoc War.

“I want to thank the local area – Merrill, Klamath Falls, Tulelake, the Lava Beds — and the Ackley’s for letting us shoot here,” added Zaragoza. “It has been an amazing experience to shoot on location, and the kindness we have received from local businesses has been incredible.”

The two films are the first notable out-of-town film productions to shoot in the Klamath Basin since 2018’s “Phoenix, Oregon,” for which a historic marker on the Oregon Film Trail was recently dedicated on Main Street in downtown Klamath Falls. They are unlikely to be the last, however, as multiple shorts and feature-length films continue to show interest in filming in Klamath County this year should finances and other factors work out.

Film productions in the Klamath Basin

Images from the film productions of "This is Their Land" and "Matterhorn," both filmed in the Klamath Basin in April 2021.