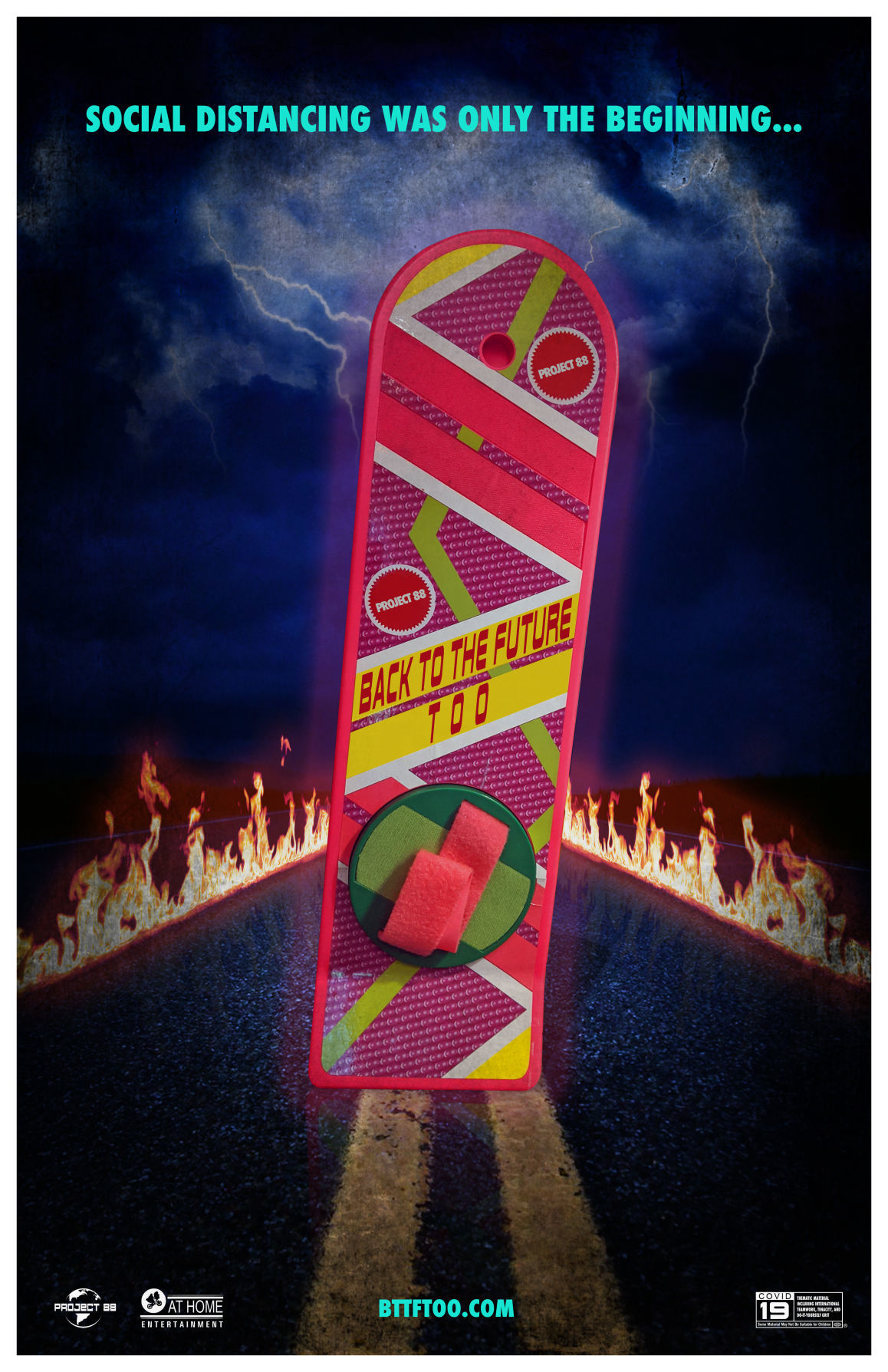 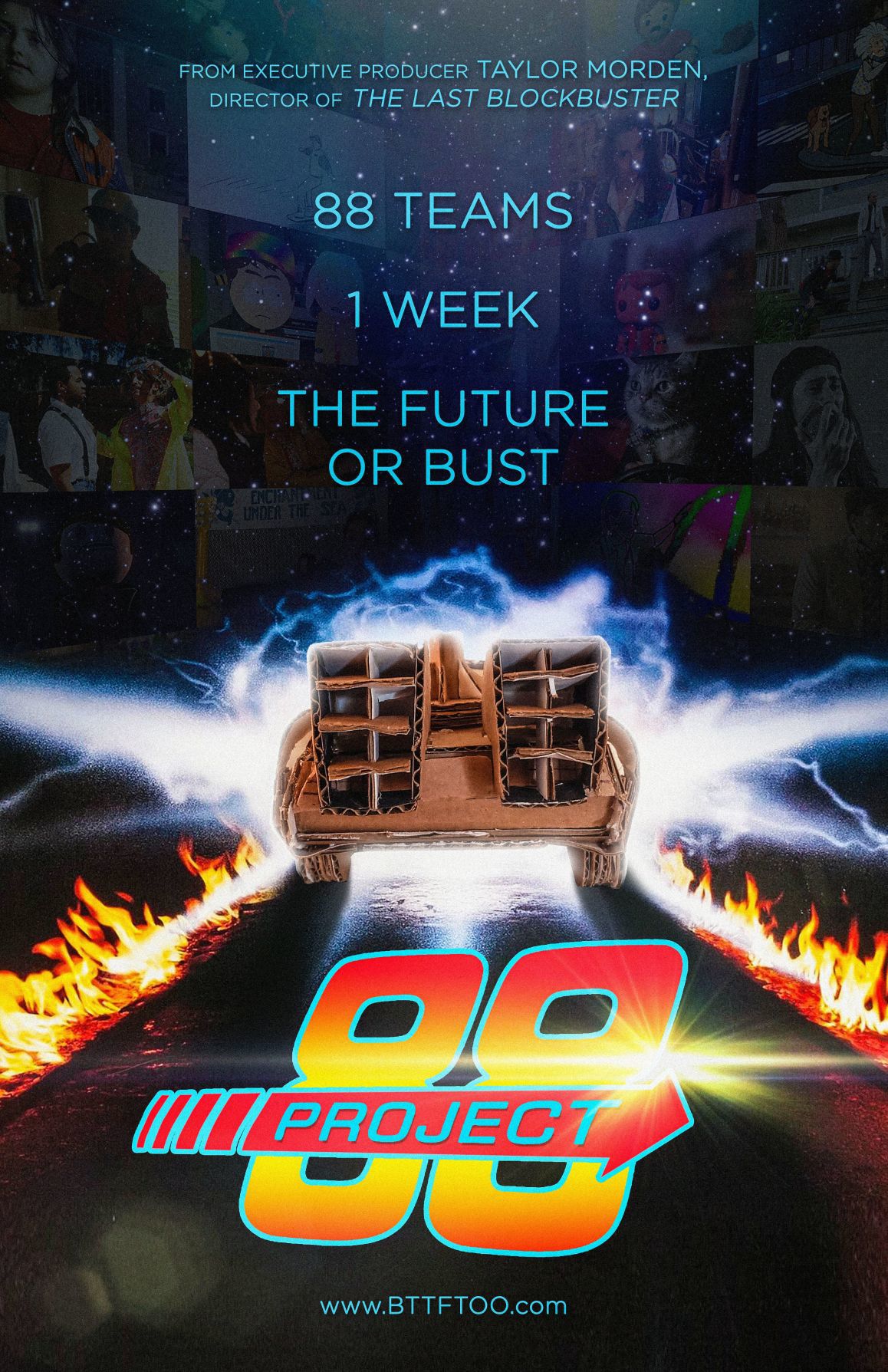 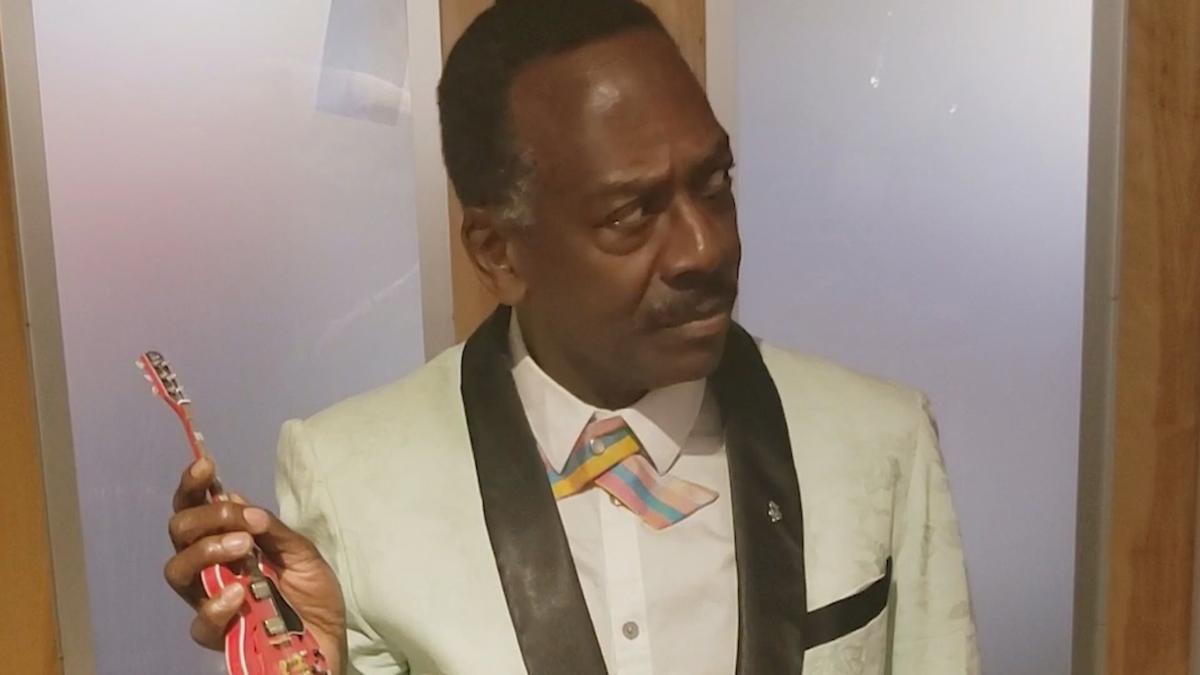 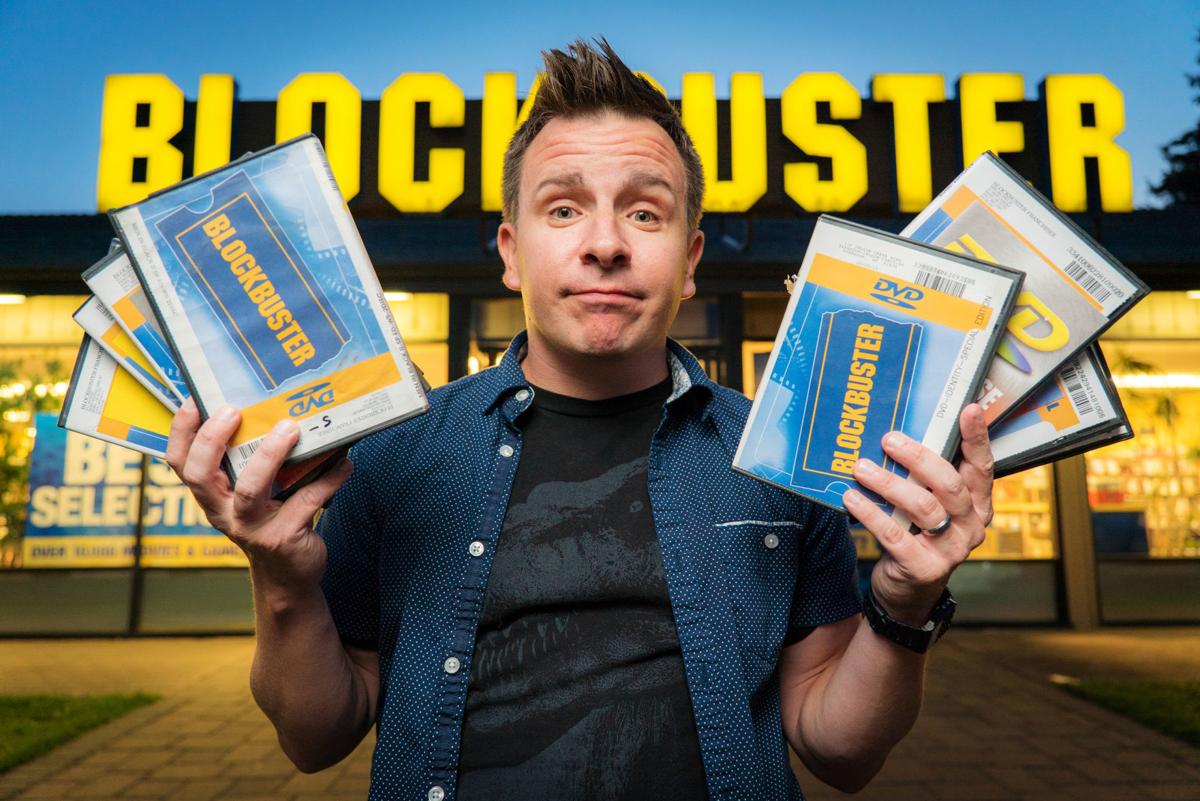 Bend filmmaker taylor Morden is nearing completion of his next documentary project profiling the last Blockbuster Video store in existence, but amidst the COVID-19 shutdown he changed tact to instead coordinate a fan-made scene-by-scene recreation of Back to the Future Pt. II titled “Project 88.”

Bend filmmaker taylor Morden is nearing completion of his next documentary project profiling the last Blockbuster Video store in existence, but amidst the COVID-19 shutdown he changed tact to instead coordinate a fan-made scene-by-scene recreation of Back to the Future Pt. II titled “Project 88.”

With filmmaking virtually shuttered amidst the ongoing stay-at-home lockdown orders during the COVID-19 crisis, one Oregon filmmaker came up with an idea to titilate the nostalgia of pop culture fandom by going back to the future.

Taylor Morden, the Bend-based filmmaker behind Pop Motion Pictures, was in the midst of wrapping up his latest documentary, a feature film highlighting the last surviving Blockbuster Video store in the world – located in Bend – with a release date set for this summer. Morden’s previous work, “Pick It Up: Ska in the 90’s” was a featured documentary film at the 2019 Klamath Independent Film Festival.

However, when the COVID-19 health crisis struck, Morden suddenly was left with a conundrum as nearly all filmmaking and theaters was indefinitely closed, and came up with a possible solution – why not create an online collaboration open to anyone in a mutual recreation of one of his all-time favorite films?

Morden is also a super-fan when it comes to all things pop culture from the 80s and 90s – his home boasting a vast collection of toys and collectibles. One of the most beloved film series from that era, and one of Morden’s favorites, is the Back to the Future film trilogy starring Michael J. Fox and Christopher Lloyd. While fan films recreating famous nostalgic films are not new, Morden’s concept for it had rarely been attempted before, splitting the film into 88 separate scenes with each scene recreated by its own assigned filmmaking team.

“I was on a phone call with another filmmaker in Bend, and we were trying to think of something we could do collaboratively while everyone was at their house,” said Morden. “I remembered someone had done something like this a decade ago with Star Wars – it’s silly and fun to watch – and I thought we could do one of those, and it would be more creative because of the limitations people are under right now. It’s been done before, but not under these kinds of circumstances.”

The choice for cutting the film into 88 scenes was obvious – anyone familiar with the franchise knows that the Delorean time machine must travel 88 miles per hour in order to travel through time. Thus, with ample free time and an opportunity to encourage positive creativity for stuck-at-home filmmakers around the world, the concept for “Project 88” was born. The goal was simple – recreate Back to the Future Part II shot-for-shot by 88 different filmmakers as a grand homage to the original film. Why Part II rather than the original? Simple, part II has hoverboards!

Each individual filmmaker or film team that agreed to participate was assigned a single scene from the film. They could shoot it however they wanted, as long as the story and dialogue remained intact from the original film. While trying to adhere to the original movie as much as possible, each filmmaking team was granted permission to film wherever and using whatever they like to re-tell the story.

Further, a deadline was given – all scenes had to be filmed and returned to Pop Motion within just one week.

Originally Morden pitched the idea to a few friends, then across a network of filmmakers, and on a Back to the Future fan page. Within 48 hours all scenes had been claimed. Hundreds enthusiastically signed up, both professional and amateur; some to fulfill free time with a creative outlet, others simply as a way to have a family project while quarantined without driving each other crazy. Scenes flowed in from across the United States and on a global scale, with people from as far away as Mexico, Argentina, Denmark and Spain providing scenes.

“With so many creative people stuck at home, we wanted to give people a creative outlet,” said Morden. “Something that anyone could do. We had people from around the world recreate scenes from Back to the Future 2 using only what they had access to during the quarantine. The results are a marvel of creativity. The best part however, is hearing from people who worked on the project, how much fun they had and how it brought some joy in a dark time.”

Despite people’s enthusiasm, the project did not come without some major hardships for Morden. While technical filmmaking guidelines were included in scene assignments, many didn’t adhere to framerate and sound and codec demands, leaving Morden with a bizarre compilation of incompatible scenes, some of which had to be tweaked to function within the project. In spite of a few minor corrections, Morden managed to make it all work; creating a project that is inherently flawed by design, but retains its charm.

Morden even contributes one scene to the project, shot entirely with props made from cardboard and hot glue.

“It was important to me that there was no barrier to entry, that anyone could do it,” said Morden. “I included everything that was sent in, nobody was excluded if they didn’t follow the technical aspects.”

The finished “Project 88” product made its public debut on YouTube on April 8, and remains available to see for free. It is a madcap smorgasbord of hilarity, oddity, creativity, and above all passion.

The film jumps from scene-to-scene in time with the original film, at times even borrowing the actual Back to the Future Part II audio, hilariously showing Doc and Marty in a family’s kitchen one minute and then animated as South Park characters the next.

“I was not expecting the variety, it blew me away,” said Morden. “I was expecting the pretty standard filmed-on-iPhone shots of people cooped up playing parts. Then I started seeing beautiful animation come in and really creative content; like there are some scenes that are all potatoes and bananas – two people on their own came up with their own separate food-related remakes. That astounded me. The fact that it goes from cats and dogs and little kids and the next is CGI by a professional filmmaker, that’s what makes it good. It could have been just this really weird thing, but as its stands it’s enjoyable because of the type of submissions we got.

If it wasn’t based around such a fondly remembered film series from which to draw inspiration perhaps it might be dismissed as just a bizarre do-it-yourself art project beyond comprehension of most, but with familiar characters and story the Back to the Future series afforded the perfect opportunity for people to lovingly recreate beloved characters in a futuristic setting and have fun during otherwise disturbingly dark times.

Project 88 recreates all aspects of the original film, down to its built-in trailer for the third and final film in the series featuring an 1885 western theme.

Among the roughly 300 people who participated in Project 88, two in particular stand out for their notoriety. Professional actors Jerry Weissman and Harry Waters Jr. both make cameos in Project 88 – notable because each were actors in the original Back to the Future trilogy. Waters played “Marvin Berry” in the first Back to the Future film as a bandleader and cousin to Chuck Berry who holds up a phone so that Chuck can hear Marty McFly playing “Johnny B. Goode.”

Weissman’s legacy in the Back to the Future story is not as straightforward. Following the success of the first film, actor Crispin Glover had a falling out with the filmmakers for the sequel. To still present the George McFly character in Back to the Future Part II, the film studio used a mold of Glover’s face made in the first film without his permission and attached it to Weisman, who portrayed Glover’s George McFly character. Weissman’s appearance in the film is in an upside floating rig, the filmmaker’s incorporating a futuristic back support into the storyline solely as a means to try to hide the switch so that audiences wouldn’t notice that a different actor was playing George McFly. Both Waters and Weissman happily joined on to contribute to Project 88, according to Morden, as a further tribute to the timeless trilogy.

In the time since Project 88’s release it has been viewed over 100,000 times on YouTube, and even garnered praise from one very special viewer. Robert Zemeckis, co-creator of the Back to the Future series, reported back through various contacts to Morden that he thought Project 88 “was cool.”

Where this film goes we don’t need roads, or in this case traditional filmmaking. As Morden’s parody film poster mimicking the original film states (complete with an “At Home Entertainment” logo replacing “Amblin Entertainment”), “Social Distancing was just the beginning…”

Due to the success of Project 88 Morden is already receiving requests to do more, but he’s hesitant to do so now knowing the rigors of making a cohesive product out of such a variety of film submissions. A petition is going around for Morden to coordinate a fan remake of “Die Hard”, but he has declined coordinating requests to do Back to the Future Part III.

“Every day somebody asks about the next one, and I have to tell them no because this turned out to be so much work,” explained Morden. “If they organize one I’ll do a scene. I think it would be a fun annual thing if we could turn it into a yearly exercise and let people vote on the movie. We’re not making any money on this, it’s just for fun.”

For now Morden is focusing on future projects – he hopes that quarantine conditions will be lifted in time for a planned July premiere of his Blockbuster documentary – but he is proud of Project 88’s success for if nothing else providing some fun and levity amidst a chaotic world.

“The very first submission we got was a guy with his three-year old son playing Marty, and I thought if this is all we get it’s still perfect because it brought them joy,” reflected Morden. “It’s great that a lot of people are watching it, but before we even uploaded it the film was a success because of the joy 300 people got out of making it.”

For more information and to see “Project 88: Back to the Future Too” visit www.bttftoo.com.