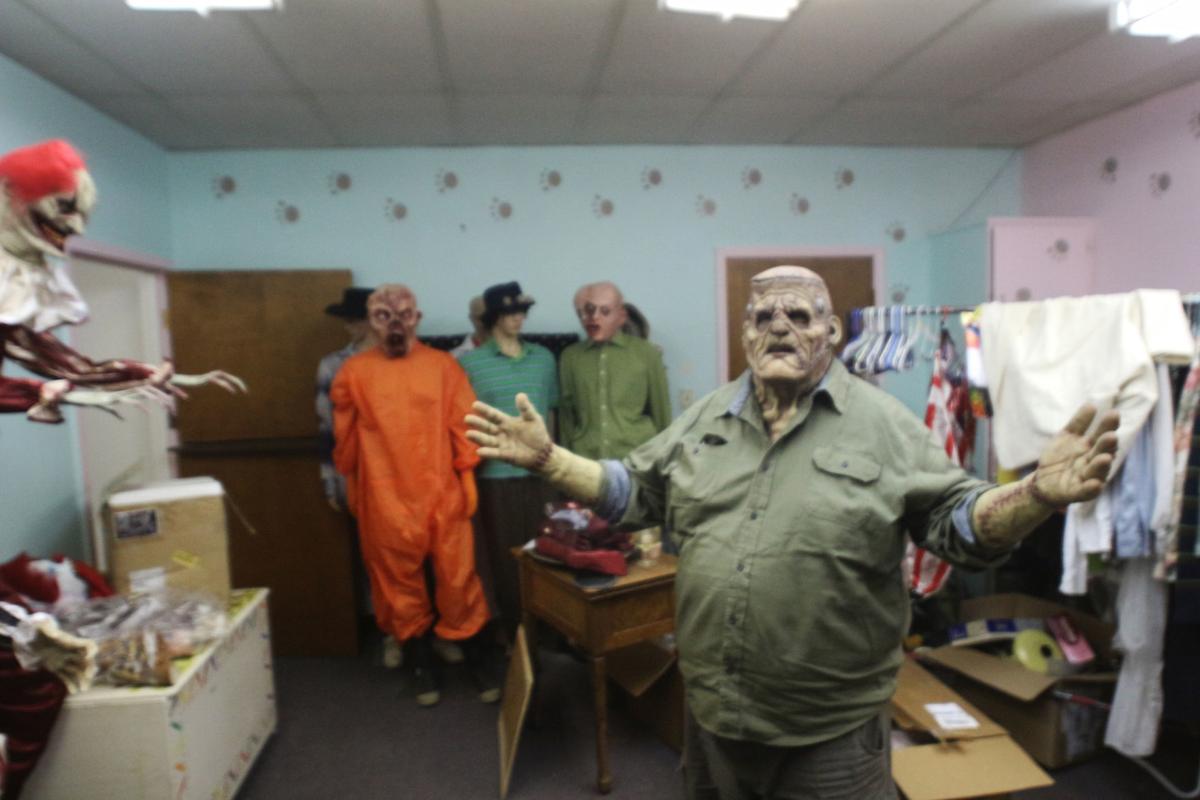 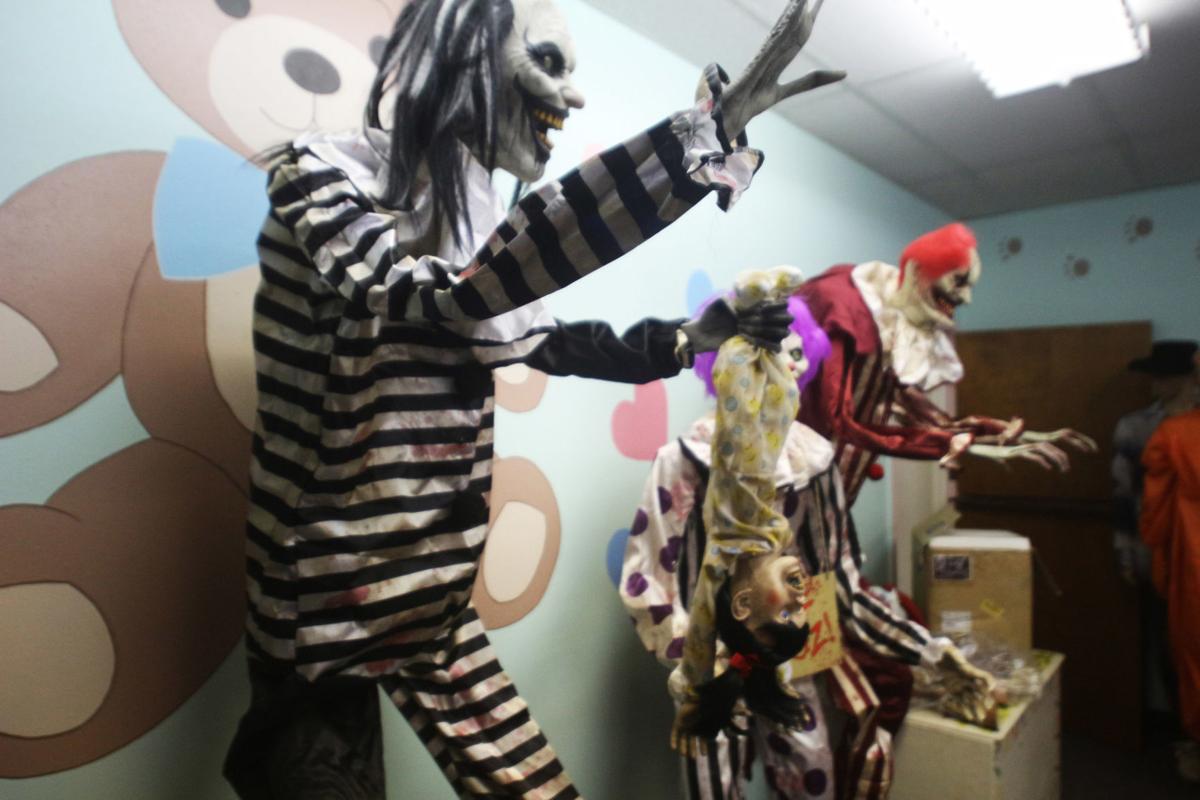 Creepy clowns crowd a nursery in one of the scary rooms of the Klamath Basin Community Center comprising Monster Mac’s Murder Manor – a haunted house opening in Klamath Falls Thursday that will run through Nov. 3.

Creepy clowns crowd a nursery in one of the scary rooms of the Klamath Basin Community Center comprising Monster Mac’s Murder Manor – a haunted house opening in Klamath Falls Thursday that will run through Nov. 3.

Unprecedented in scale and quality, over a month of construction has culminated in a new haunted house opening in downtoown Klamath Falls Thursday – “Monster Mac’s Murder Manor.”

Located at the Klamath Basin Community Center on High Street, the Murder Manor is a manic medley of macabre just in time to get in the spirit for Halloween. The project is a collaboration of a small but dedicated crew led by “Monster” Mac McCune, owner of Nerds R Us, his brother Roger and other family and friends. Roger’s expertise as a stage designer has led to the creation of a haunted house experience unlike anything previously seen in the Klamath Basin, impressive in its realism and scary beyond measure.

Beginning with an opening gala Thursday evening featuring live music by local favorite Nephilim and walkthroughs of the Murder Manor, the haunted house will operate on Thursdays, Fridays and Saturdays through Nov. 3. While awaiting entry into the Murder Manor a waiting room allows anxious visitors to build up their nerves with some scary photo opportunities, play a carnival-style brain toss game, or imbibe in food offerings available for purchase such as boo-ritos, monster mac ‘n’ cheese, mummy dogs, coffin-shaped brownies and other finger foods – which may or may not resemble actual fingers.

The Murder Manor is the culmination of a long dream of McCune’s, who established a love of horror films and creepy-crawly things early in life growing up in Las Vegas a huge fan of Jim Parker, a.k.a. “the Vegas Vampire” – an icon of the 1960s and ‘70s who aired scary movies on local late-night television. McCune has longed to host a haunted house or “dark ride” like the haunted mansion at Disneyland for those who also love scary movies and Halloween frights, and he has invested thousands of dollars in doing it bigger and better than anything the Klamath Basin has previously seen.

“We have invested a lot of time and energy into this, Klamath Falls has never had a haunted house like this, I know because I’ve been to so many of them,” said McCune. “Every year my wife and I hit all the haunts, we travel all over. Since this is my hometown I wanted to bring to it the best. I figured I’m not getting any younger so might as well do it, and if I’m going to do it we’re doing it right.”

The Murder Manor has a philanthropic theme as well. While McCune doesn’t expect to make a profit in the first year of operation, by making the event an annual haunted house he hopes to draw people to the Klamath Basin as word of mouth spreads to increase tourism revenue for the community and become a mainstay of Halloween celebrations. Additionally, proceeds from ticket sales will be provided to the Klamath Basin Community Center as a fundraiser for its operations as well as Marta’s House, Turtle Cove Community Complex, and other local housing efforts to aid those in need of a safe home.

“This one event is going to help us operate all year,” said Wanda Powless, director of the Klamath Basin Community Center. “This is like the event of the century for us, I can’t wait to go through it – it’s so interesting!”

Construction has been steady since August to build a massive maze with various themed areas filled with crazy costumed actors, displays, animatronics and plenty of creepy things aimed at providing chills and thrills. Included is what McCune dubs “the world’s largest zombie,” a pneumatic zombie of King Kong equivalence that must be seen to be believed. It was acquisition of the world’s largest zombie that inspired McCune to start collecting as many items as possible to bring the Murder Manor to life.

“I travel to big haunts like Transworld in St. Louis, where I bought a lot of the props we have,” said McCune. “I wanted to go big or go home, and it doesn’t get much bigger than that. There are a lot of very realistic props, some that have been used on TV. I try to go to all these different special effects and prop houses to get the best things they have to stock all of this – we’re trying to give people the most thrills we possibly can.”

The Murder Manor includes themed rooms such as a nursery filled with murderous clowns, a deranged doctor’s office, sanitarium, elevator from hell, a morgue, a “squeeze room” entryway that increases the sensation of claustrophobia, and much more. There are some familiar faces too like Alice Cooper, Beetlejuice, Michael Myers and Bub the zombie from the iconic horror film “Day of the Dead.”

McCune is so confident of the terrors within the Murder Manor that he is even keeping a running tally challenge for the actors who will don scary costumes and makeup, documenting each time that patrons may have peed their pants out of fright. Some of the costumes have already made quite an impression, as a Frankenstein outfit was donned over the summer for downtown Klamath Falls’ monthly Third Thursday events.

While thrills are expected, safety is also a prime concern. McCune is taking major steps to assure that the event is intended to be fun, but safe as well. Safety measures include fire retardant located throughout the Murder Manor, on-site security, and every guest will be briefed about extensive rules prior to entry. No weapons or alcohol will be allowed, as McCune wants the Murder Manor to be a family-friendly venture, though small youngsters and weak-willed individuals may want to think twice before entering.

“We’re really trying to give people their money’s worth,” added McCune. “I want so much stuff in here that when people go through the first time they want to go back and do it again. There will be lots of jump scares.”

“I hope we can turn Klamath Falls into a destination spot for horror fans, and every year it will be different,” said McCune. “I would love to see revenue for businesses here increase because people are traveling to Klamath Falls for Halloween to experience the Murder Manor. We want people to have fun, that’s the main thing.”

Tickets to enter Monster Mac’s Murder Manor are $10, or $15 for a fastpass. It will be open on most Thursdays, Fridays and Saturdays through Nov. 3. The Murder Manor will open at 8 p.m. and continue until there are no people left to scare. Additionally, on Saturday, Oct. 20 and 27 the Murder Manor will hold special daytime matinees at 1 p.m. The Klamath Basin Community Center is at 707 High St.

COST: $10 per person, $15 fastpass, with proceeds to benefit Marta's House and other organizations

Construction has been steady since August to build a massive maze with various themed areas filled with crazy costumed actors, displays, animatronics and plenty of creepy things aimed at providing chills and thrills. Included is what McCune dubs “the world’s largest zombie,” a pneumatic zombie of King Kong equivalence that must be seen to be believed.