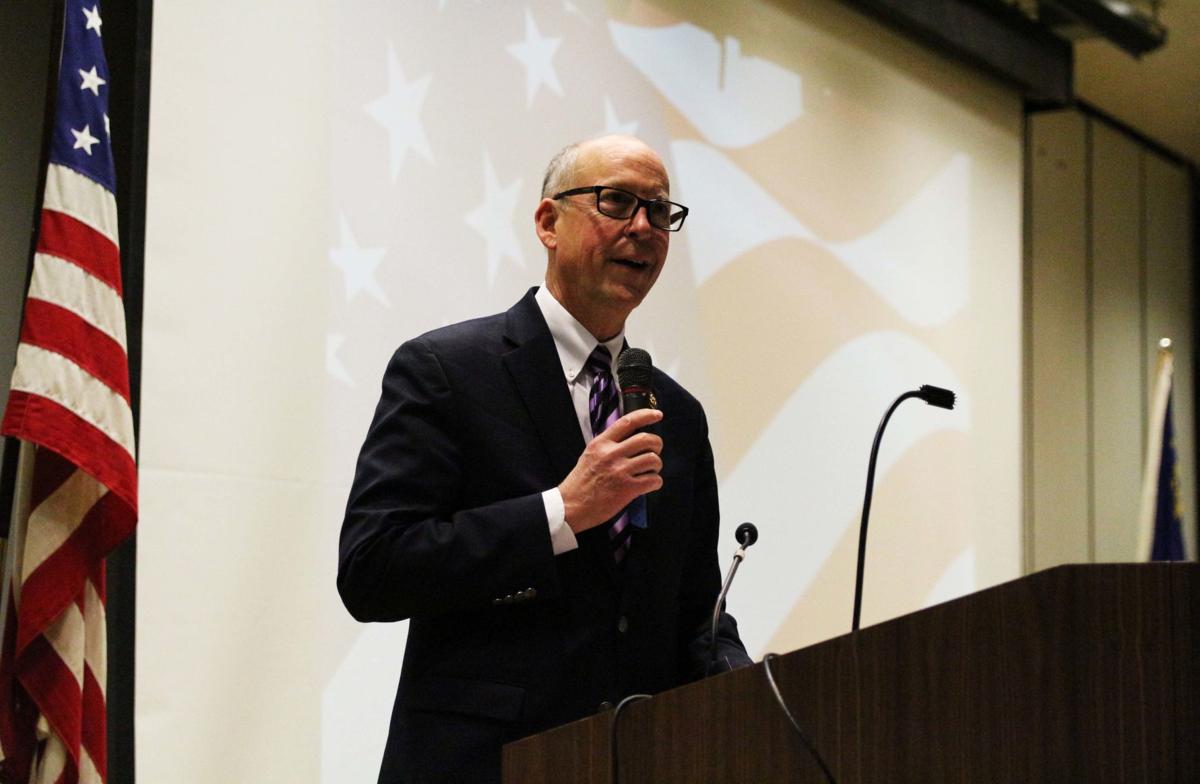 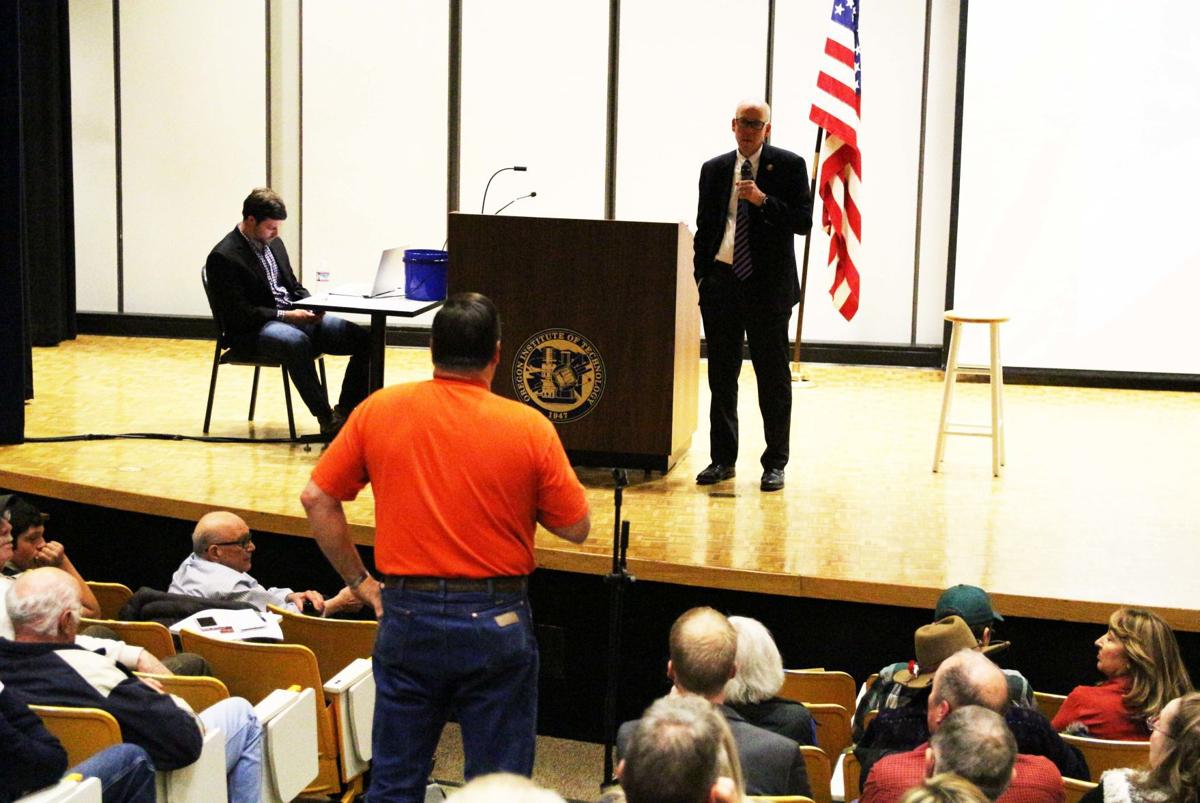 U.S. Rep. Greg Walden, a Hood River Republican answers a question from Gary Jackson, of Myrtle Creek, during a town hall meeting at Oregon Tech on Friday afternoon. The gathering, one of several for Walden this week, drew about 150 to the university. 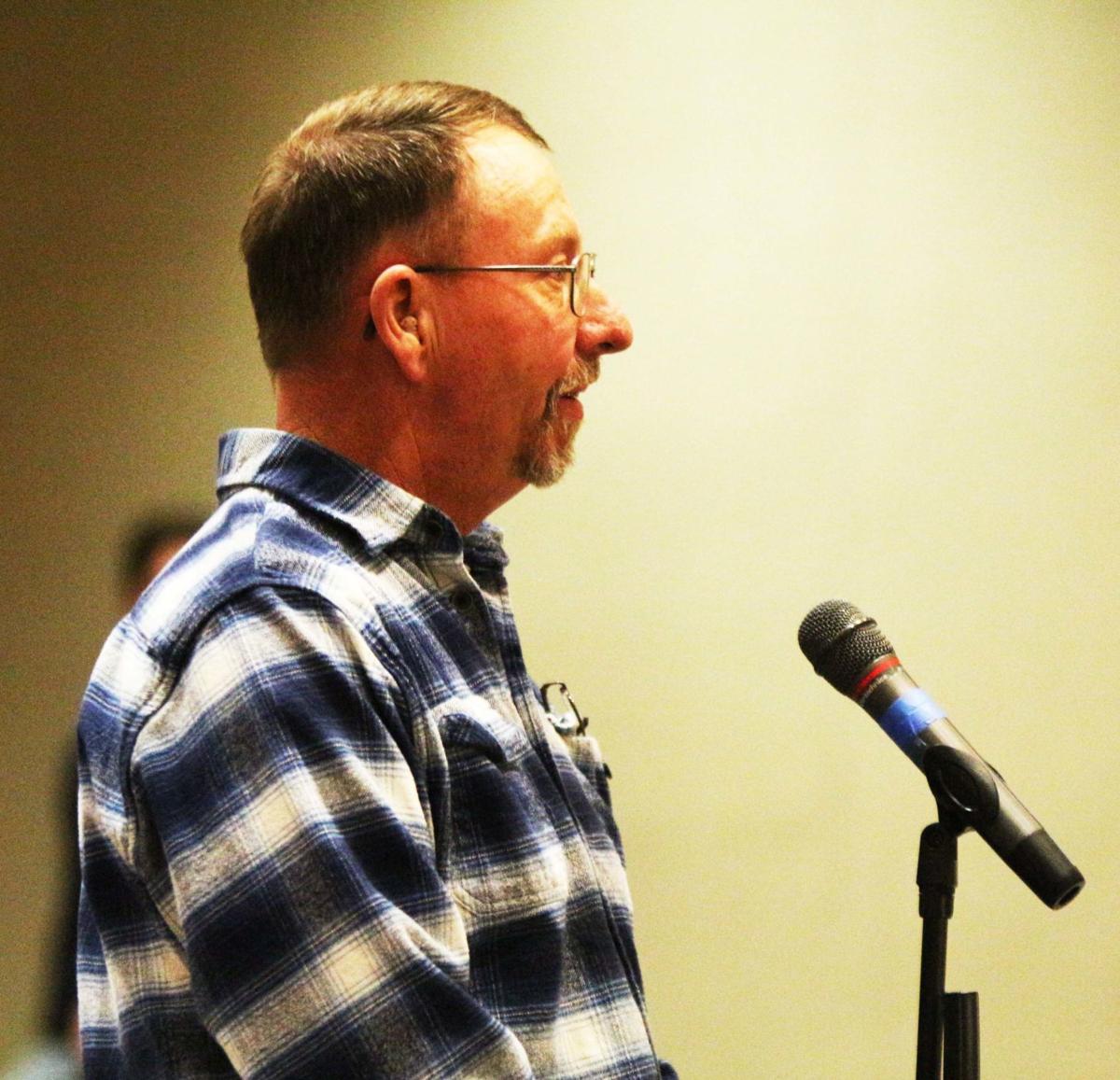 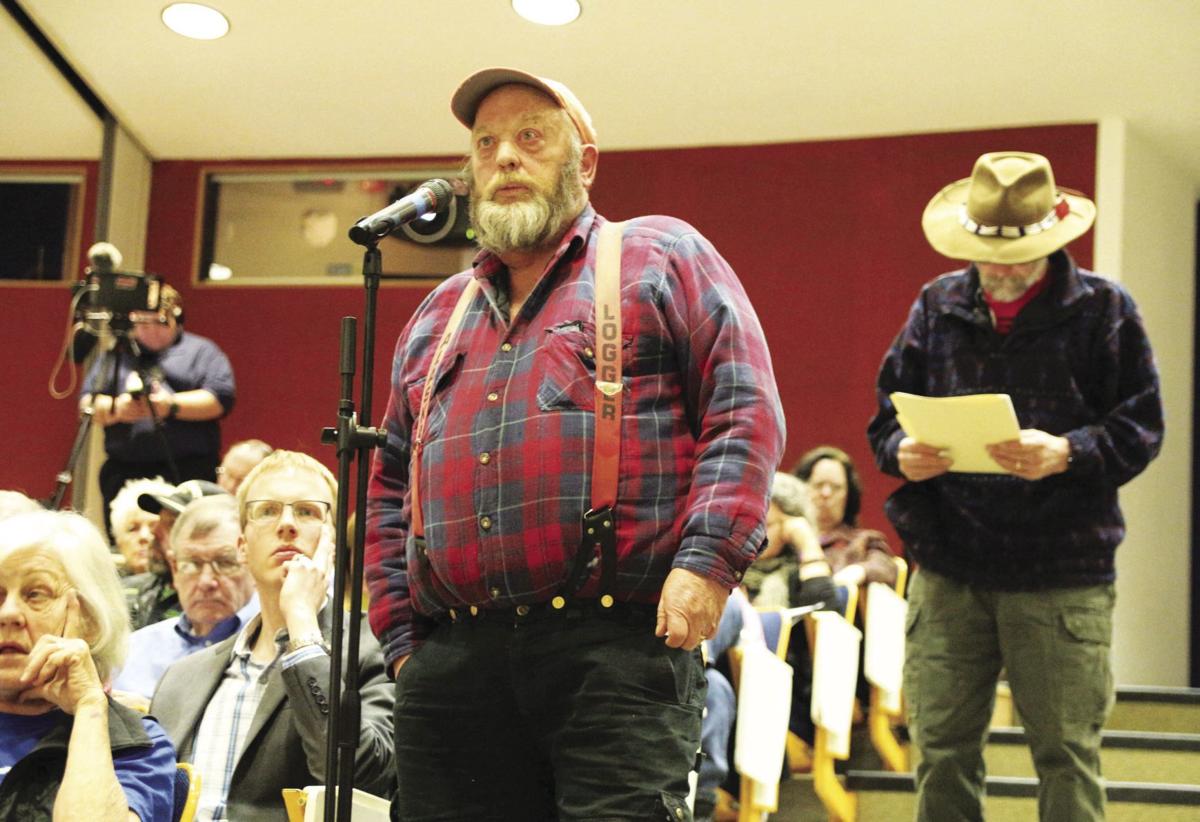 Jerry Jones, of Modoc Point Irrigation District, shares continued concerns over water with U.S. Rep. Greg Walden, (R-Ore.) during a townhall hosted by the congressman at Oregon Tech on Friday. 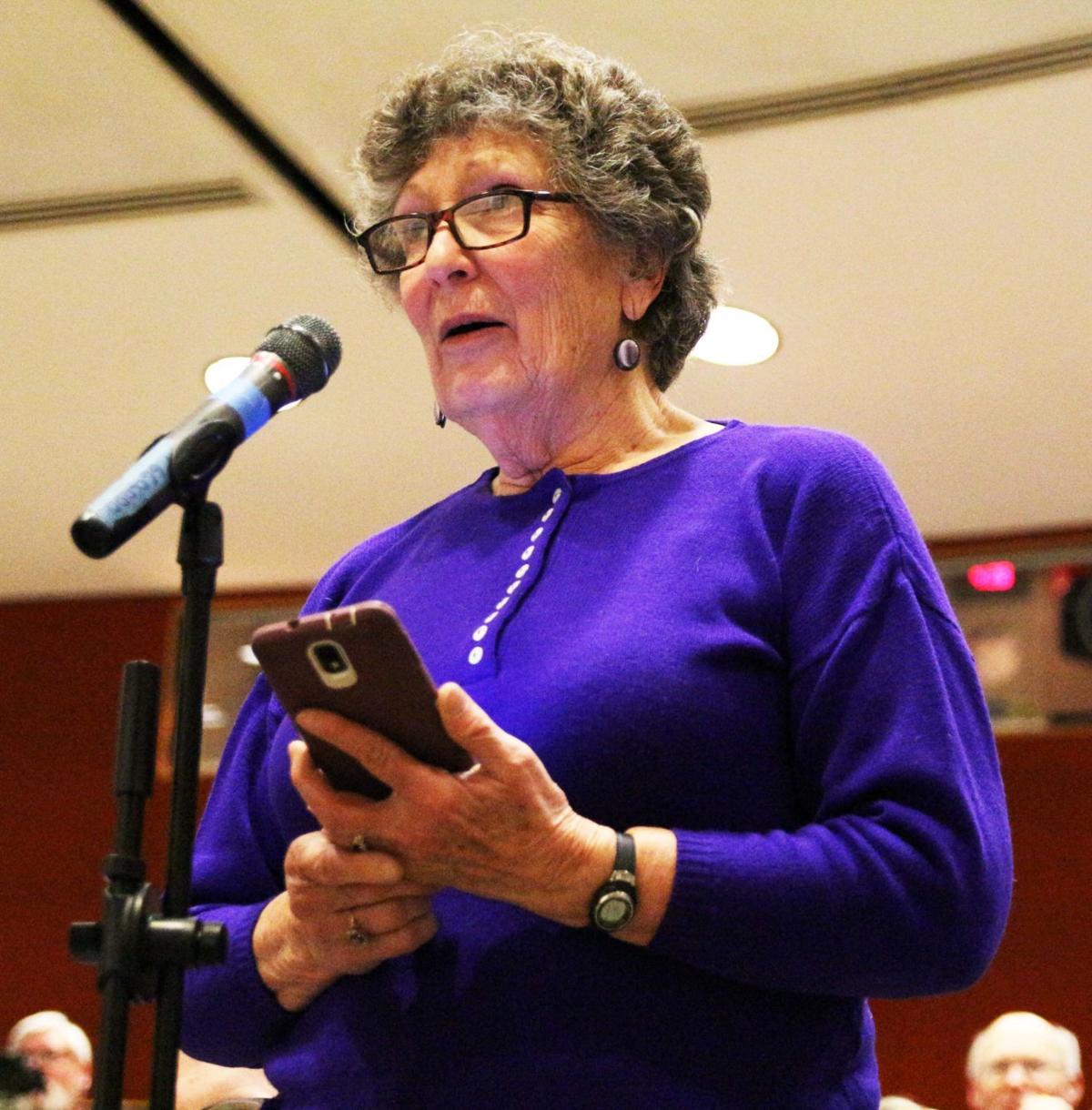 U.S. Rep. Greg Walden, a Hood River Republican answers a question from Gary Jackson, of Myrtle Creek, during a town hall meeting at Oregon Tech on Friday afternoon. The gathering, one of several for Walden this week, drew about 150 to the university.

Jerry Jones, of Modoc Point Irrigation District, shares continued concerns over water with U.S. Rep. Greg Walden, (R-Ore.) during a townhall hosted by the congressman at Oregon Tech on Friday.

Congressman Greg Walden wasn’t shy about his thoughts on border security and the wall on the border between the United States and Mexico during a town hall in Klamath Falls on Friday, where he discussed recently casting a vote outside Republican Party lines to end the partial shutdown of the federal government.

The Hood River Republican specifically took issue, though, with the furlough of employees of the Departments of the Interior, Agriculture, Bureau of Land Management, and U.S. Fish and Wildlife Service.

“I’ve cited the Klamath Basin and the Biological Opinion as one of the things that got delayed (in the) course of these discussions,” Walden said.

Walden wants to exempt agencies funded by Department of Interior, Agriculture, and Fish and Wildlife from the shutdown.

“Why inflict all this?” he said. “I didn’t sign up for this kind of shutdown,” Walden added.

During the town hall, which drew about 150 people to Oregon Tech, he called the vote a bit of a “break” with party lines, a comment met with applause from some in the audience.

“I don’t know what a BLM worker in Vale or a Forest Service worker in John Day or Fish and Wildlife down here has to do with this debate that’s going on in Washington right now,” Walden said. “I also very much support getting border security in place.”

Walden said he asked for his pay to be with held during the shutdown out of solidarity for federal workers furloughed.

“I told Mrs. Walden a couple days later,” he noted.

“We need to work through this, the people that make the decisions — Nancy Pelosi and Donald Trump and Chuck Schumer and Mitch McConnell — need to get in a big room and work this out.”

But when it comes to the wall, the concept isn’t new to Walden, or he said, many other politicians.

That fence references House Resolution 6061, known as the Secure Fence Act of 2006.

“The fight is over the Homeland Security appropriations bill that contains the funding for the wall and border security.”

For Walden, it’s a holding pattern until 60 votes can be found to move the bill in the Senate.

“The president said he’ll veto until they get a resolution on border funding,” Walden said.

Walden also touched on other national issues, such as elections, in response to Michael Fitzgerald’s question.

“We don’t need other governments — Russia — involved in our elections, or the way we conduct our public process,” Walden said. “We need to be able to have faith in our electoral process.”

He responded to Leslie Lowe’s questions of whether he would change his votes on issues, such as immigration by saying: “I don’t support open borders … I do support border security.”

“It’s authorized $10 million for each of the next four years, if necessary,” he said.

“You would have to fund it but then it’s already authorized. You can’t fund something if you don’t know if you’re going to need it. Part of what we ran into was we needed that authorization.”

Walden said funding for drought relief would likely be found in a disaster bill in 2019, if needed, which can cover wildfires, floods, hurricanes, tornadoes and drought.

“In the context of that, we can say, this is already authorized,” he said. “It’s emergency funding for emergency situations.”

The Klamath Project Drought Response Agency (KPDRA), which is set to distribute more than $9 million in federal drought relief to irrigators, was set to dissolve in June.

The agency will have approximately $1.5 million left over and, if it remains an organization, could oversee transfer of funding from AWIA, according to Walden’s staff.

“We’ve got to look at something different,” Unruh said. “We need your help and we need to fix the problem.”

Walden said he’s not worked on an issue that’s “more vexing” and “more elusive” than trying to come to a long-term solution over ongoing water conflicts in the Klamath Basin.

“There’s so many legal issues, treaty issues, political issues,” Walden said. “I’m open to working with anybody. I still believe there’s a way through this.”

Walden also addressed wildfires in 2018 and expressed dissatisfaction with how they’ve been handled.

“I pushed hard in the last Congress to get more authorities that are proven and work to reduce the fuel loads in our forests,” Walden said.

Walden said a prior Farm Bill had included authority for “thinning” of forests but it was up to governors of states to decide which forests to conduct thinning. He hopes to gain authority to allow thinning in all areas of the district.

Walden also waxed hopeful that a visit by Secretary of the Air Force Heather Wilson to Kingsley Field late last year could mean big things for Air National Guard base in the future.

“I am hopeful as a result of that visit that we can move forward and have a flying mission out of here that keeps that base at its full capacity or more,” Walden said. “Whether that’s F-35s or the F-15-e’s, or other type of training of aircraft, I think we’re in a little better position.”

Congressman Greg Walden defended his lack of in-person town halls in 2018 — when he was up for re-election — which were replaced with telephonic town halls, as well as regular responses to emails, phone calls and letters.

“We've had problems getting you here and getting opportunities to speak with you,” said Leslie Lowe on Friday.

In an interview following the forum, Walden elaborated on the other ways he chose to respond to constituents in 2018 other than in a public forum.

“I've been here a number of other times,” Walden said, citing many private meetings he has held with residents in the business, as well as public and private sector in Klamath Falls in 2018.

Many of the private meetings were reported on by the H&N though the direction from Walden's staff was that they were not open to the general public.

“Representing people is more than a town hall,” Walden said, “but town halls are important.”

Compared to two decades ago, Walden said communication has changed how he talks with those in his district.

“There weren't many people on email, there was no YouTube, there was no Facebook, there was no Instagram,” Walden said. “It's just another way to hear from people. And that's part of why I come back on a regular basis.”

“We should not diminish the value of those sorts of parts of this job because they're really important,” Walden said.

Walden denied that he doesn't want certain groups, such as Indivisible Klamath, to attend town halls.

“I have an open door policy,” Walden said. “We were advised by security for all these town halls not to allow signs in and so we've asked people to park their signs.”

Fifteen signs were left at the door, according to Walden's staff.

“We're not going to get into a big fight, you get competing interests at these meetings and the last thing you want is some conflict over somebody's darn sign,” Walden said.

Walden said at times during past town halls, some individuals have shouted down others around them in the audience.

“I don't put up with that on either side,” Walden said. “I try to maintain civility. But at some point it kind of diminishes … it's not as productive.”

Walden also said he's taken a tip from senators who use the system of signing up for a ticket in order to ask him a question at the podium.

“It brings calm to the room and then you can start to have a conversation,” Walden said.