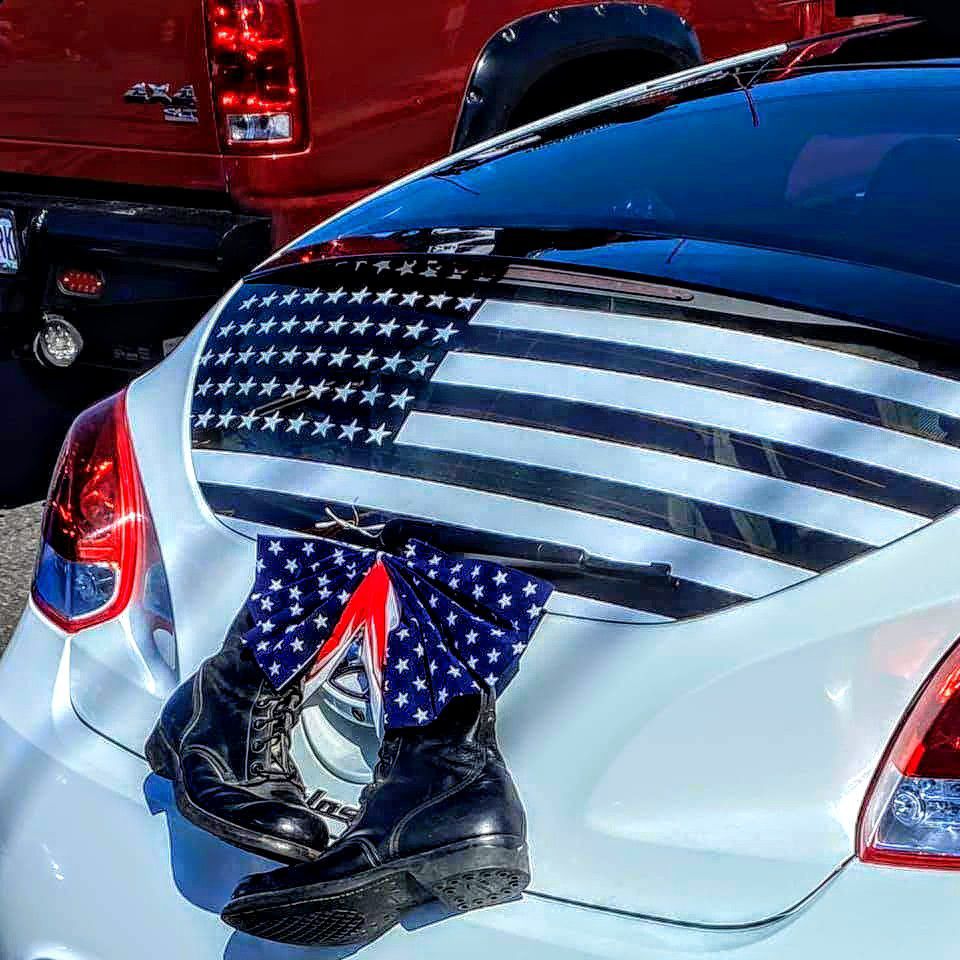 Ryan Wheelock always puts his late father’s boots from Vietnam on the back of his car when participating in a parade and this year he did so for a cruise to commemorate Memorial Day in Klamath Falls. 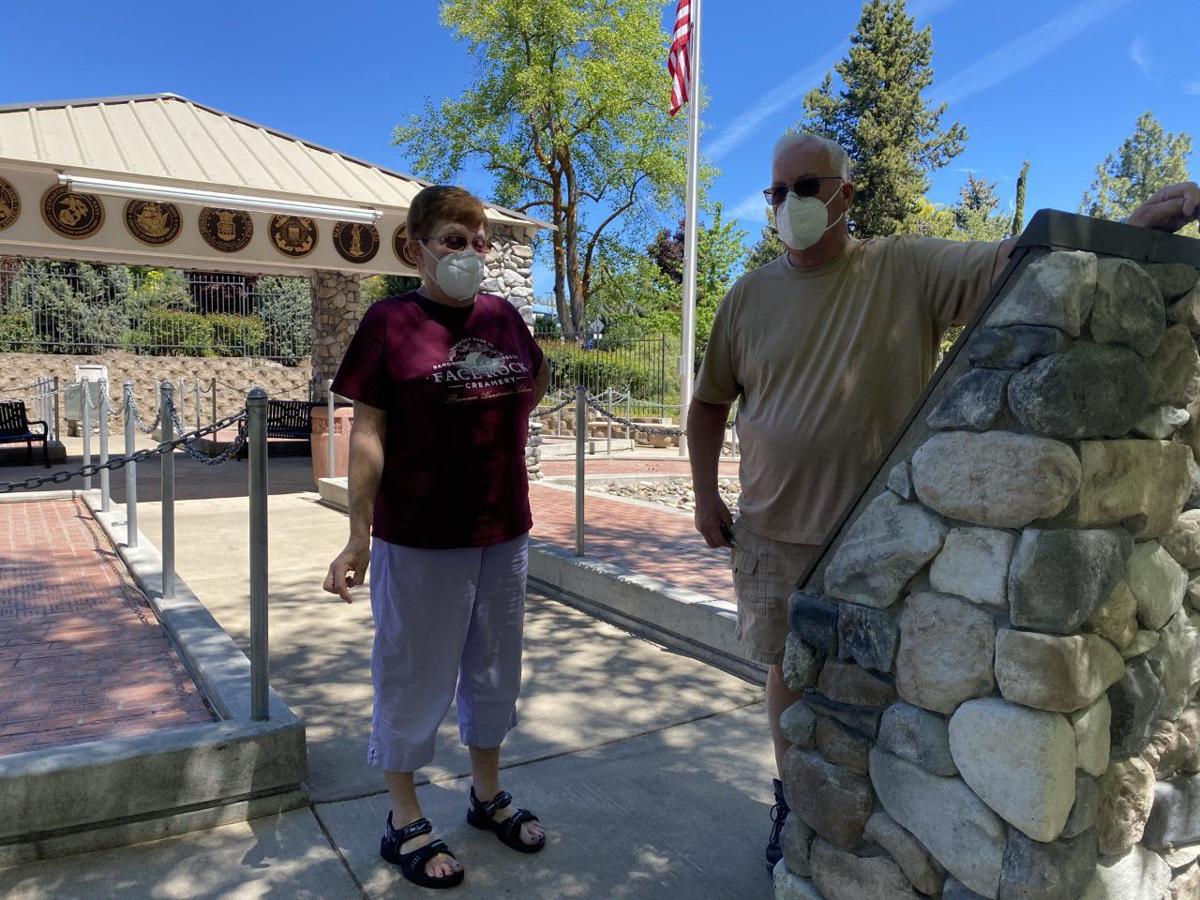 Lorna and Jerry Calhoun of Klamath Falls prefer to wear masks in public in light of the COVID-19 pandemic. Jerry served in Vietnam and his father served in World War II. 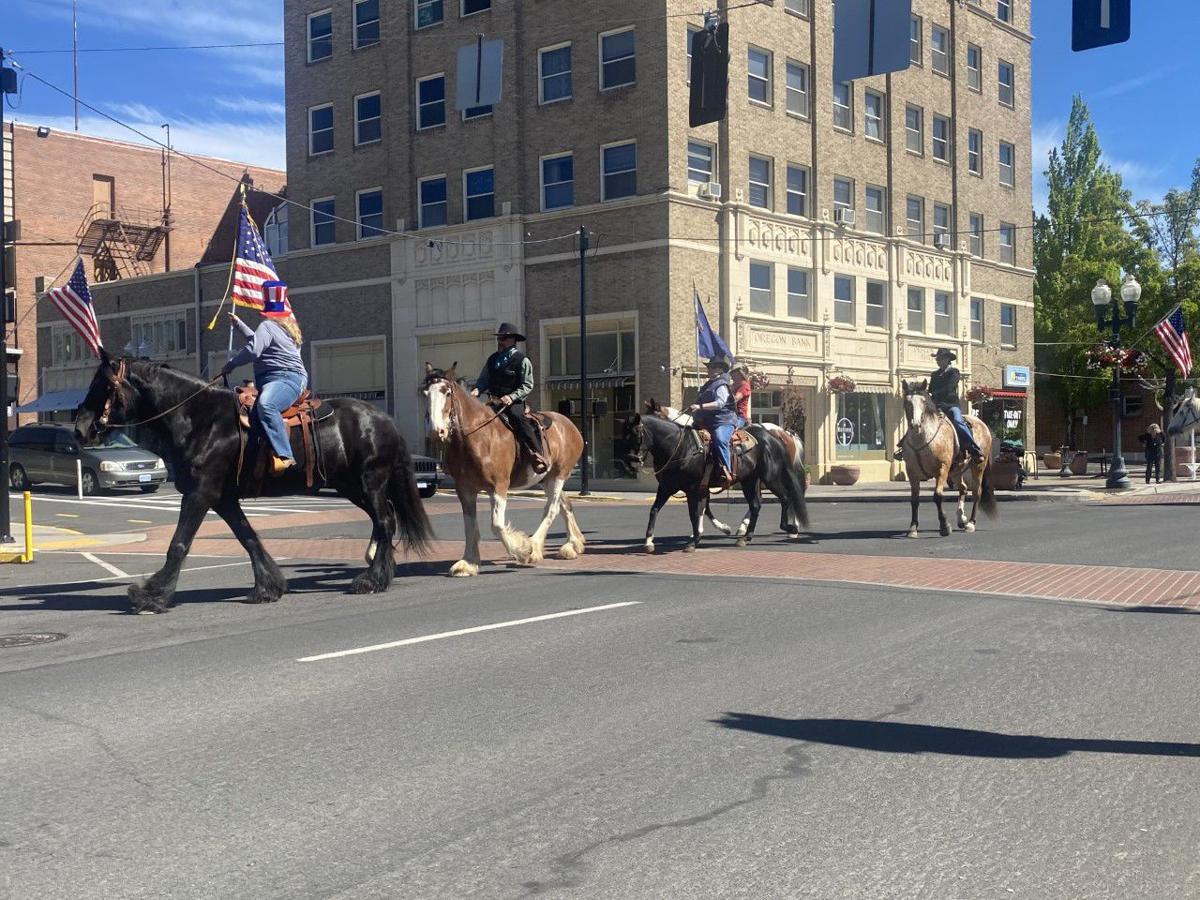 Several people participated in the cruise on horseback. 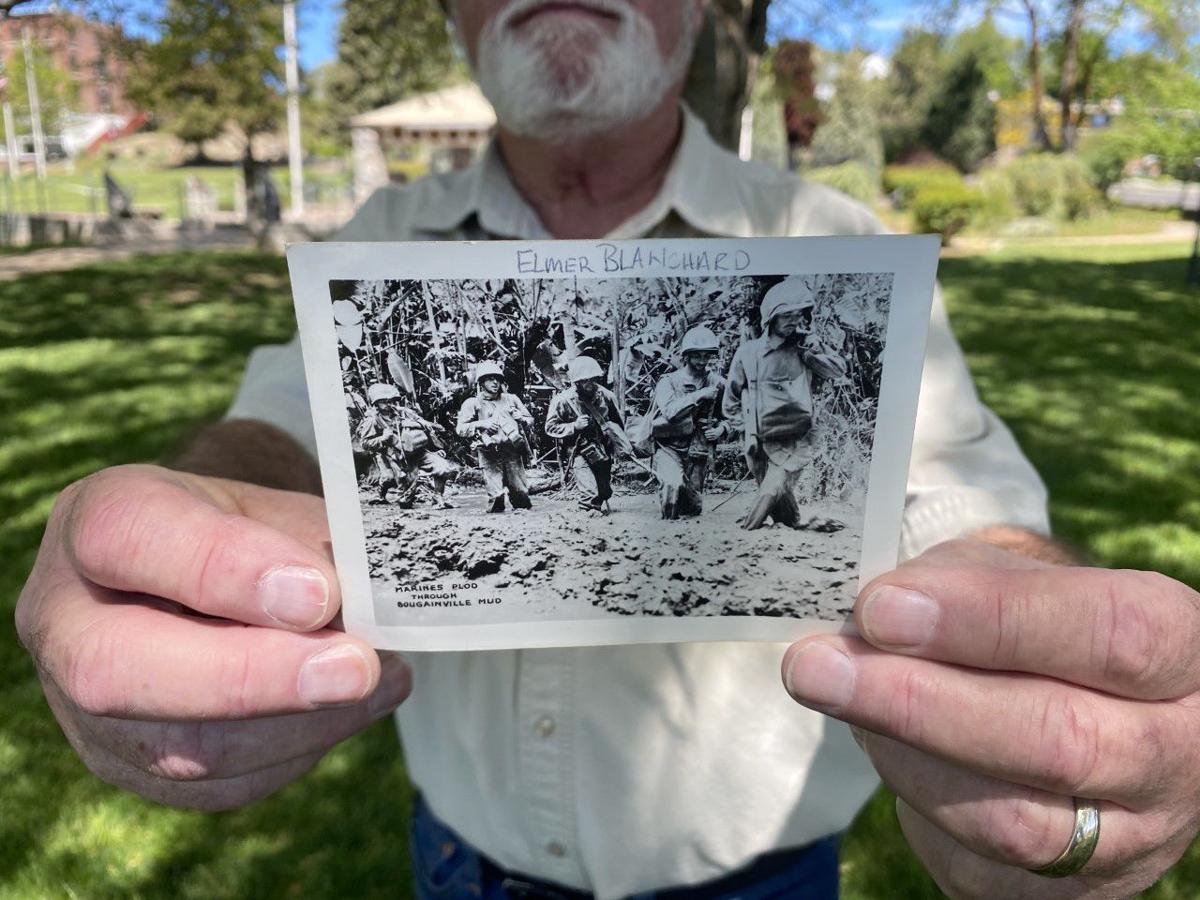 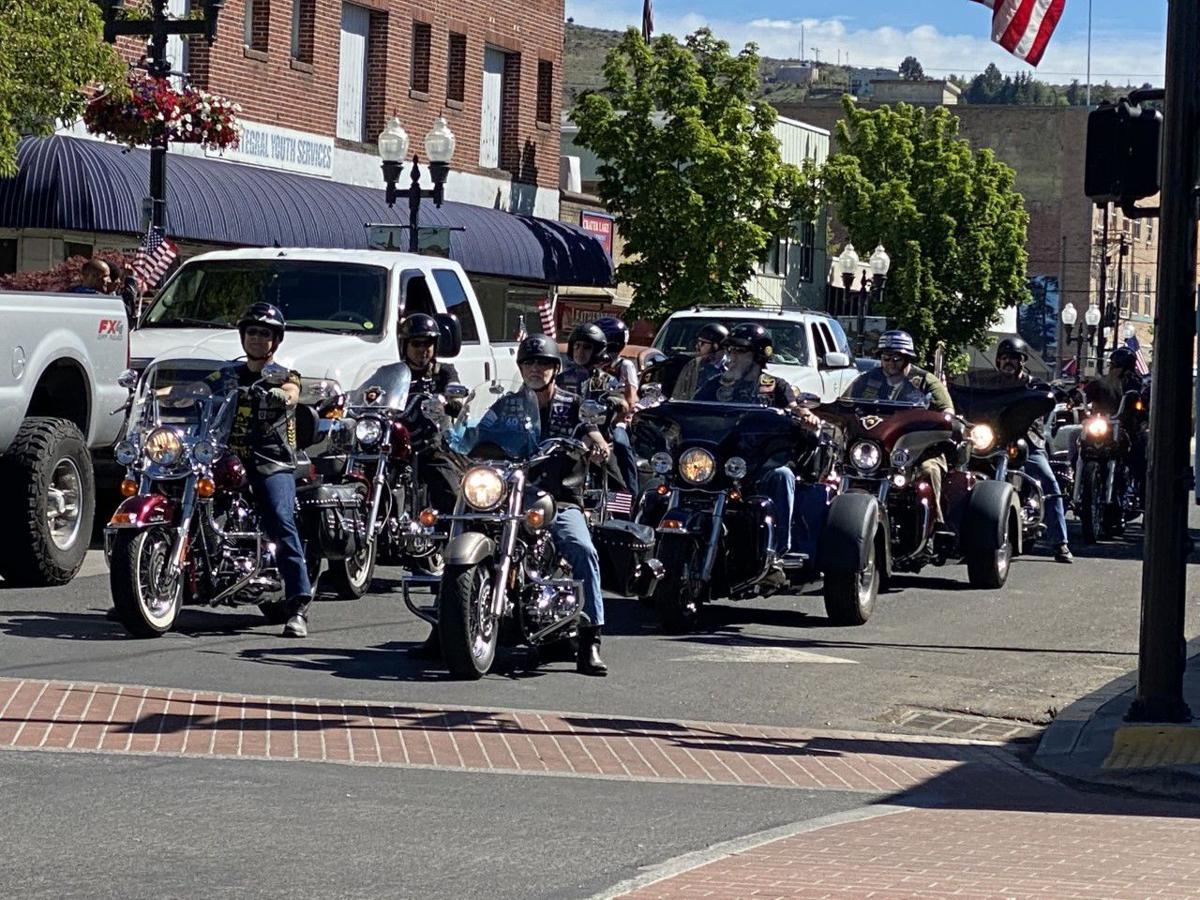 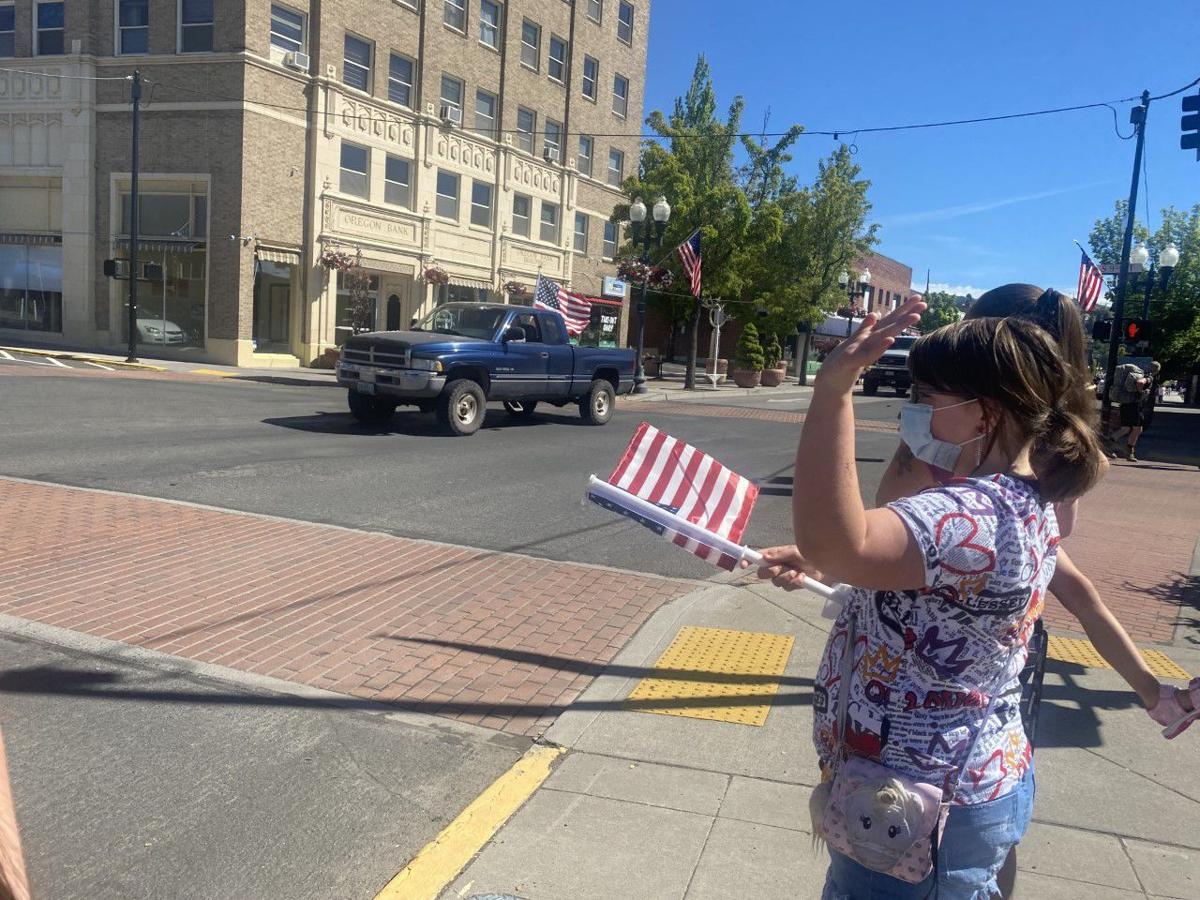 An attendee of the Memorial Day cruise waves a flag and wears a mask while watching the unofficial event.

Subscribe Today! Please read: Readers of local content on the Herald and News website – heraldandnews.com – will require a subscription beginning today. For the first few months, non-subscribers will still be able to view 10 articles for free. If you are not already a subscriber, now is a great time to join for as little as $10/month!
1 of 6

Ryan Wheelock always puts his late father’s boots from Vietnam on the back of his car when participating in a parade and this year he did so for a cruise to commemorate Memorial Day in Klamath Falls.

Lorna and Jerry Calhoun of Klamath Falls prefer to wear masks in public in light of the COVID-19 pandemic. Jerry served in Vietnam and his father served in World War II.

Several people participated in the cruise on horseback.

An attendee of the Memorial Day cruise waves a flag and wears a mask while watching the unofficial event.

A pair of black military boots hung from the back of Ryan Wheelock’s vehicle, which was clad with an American flag as he rolled down Main Street in Klamath Falls on Monday morning, honoring his late father who served in Vietnam.

Wheelock, senior vice president of Klamath Freedom Celebration, was among about 200 people who cruised through the downtown area to honor the fallen, by vehicle, motorcycle, or even horseback. Motorcycles and vehicles of all shapes and sizes revved engines and carried individuals waving flags in support of the Red, White, and Blue.

“Every parade or anything I’ve ever done here in Klamath County, I have his Vietnam boots that hang off the back of my vehicle,” Wheelock said, adding that his father passed away in 2001.

Wheelock emphasized that while Klamath Freedom Celebration organizes the Memorial Day, Fourth of July, and Veterans Day parades each year, the cruise was not a parade.

This year the group learned that a request for a permit from the city of Klamath Falls could not be granted for a traditional Memorial Day parade due to Oregon Gov. Kate Brown’s mandate on gatherings of more than 25 people.

When Wheelock learned this, he decided to find an alternative, even if it was in an unofficial capacity.

“I wasn’t going to sit and do nothing,” Wheelock said. “With my business, I had to sit for two months and do nothing and I wasn’t letting this go without doing something, even if it was just me driving down the street with my kids.”

And families and individuals showed up, lining the streets as they would in a parade, with a turnout of about 50 people or more spread out along Main Street.

Spectators — many without masks — waved flags and clapped as the vehicles rolled by, with at times both horses and vehicles.

Micaela Alvarez-De Dios, of Klamath Falls, held an American flag through the sun roof of a vehicle as Cory Alvarez drove down the middle of Main Street.

Both Alvarez-De Dios and Alvarez felt strongly about honoring those who have served and died for their country.

“This is the one day you can’t cancel,” Cory Alvarez said, following the cruise.

“The least we can do is celebrate one day of the year for them.”

Wheelock said he knew that people would show up just to show their support.

Doug Brown, president and founder of Klamath Freedom Celebration, emphasized that the “impromptu” event maintained physical distancing by participants staying in their vehicles as they rolled down Main Street.

“We weren’t here to break rules, we weren’t here to protest,” Brown said. “We were here to take care of the people who have given all, and we have that right as Americans and nobody’s going to take that away from me. I’m too old, I’m too scrappy, and I’m ready to put up a fight if it comes to that.”

“We want to play by the rules but we want to represent,” he added.

Brown added that the cruise was among one of the largest turnouts compared to previous Memorial Day parades.

“People are tired of being shut in,” Brown said. “They want to voice their opinion.”

Many of the cruise participants met up afterward at Veterans Memorial Park, where they gathered together in small groups.

Wheelock said individuals were told to be responsible for themselves since it wasn’t an official event.

“I told everybody, ‘If we’re going to be down here, got to be the six feet social distance apart,’” Wheelock said.

“I told everybody they were on their own when it comes to this in general because we’re not supposed to do it,” Wheelock added.

There were some individuals who shook hands with those in attendance, while others stood closer than six feet to one another in groups.

Others looked for a relative around the circle of bricks honoring veterans at the park, and stood apart from groups.

When asked about the possibility of being penalized for the event, neither Wheelock nor Brown had concerns.

“It wasn’t an organized event,” Wheelock said. “It was just put out on Facebook saying, ‘I’m doing this – Whoever wants to join can do it.’”

Wheelock noted that he was surprised to see horses at the cruise, in addition to the turnout of spectators.

“If they do want to come down on me for something, they can do it,” Wheelock said.

“It was about making sure that we gave respect to the men and women that lost their lives or gave them so that we could have our freedoms.”

“We didn’t want the streets packed, because that’s when you do get into some issues,” Brown said.

“It was about us just being able to freely drive down the road and represent those people (who served).”

For a gathering at Veterans Memorial Park with mostly unmasked participants, Jerry and Lorna Calhoun stood out.

The Klamath Falls couple, both wearing N95 masks, were separate from participants of the cruise and were looking for a brick with the name of Jerry’s late father, Orval Lane Calhoun, a corporal in the U.S. Army Air Corps from 1942-1945. Jerry also has a brick near his father’s, as he was wounded in Vietnam as a lance corporal in the U.S. Marine Corps.

The couple said they wear masks in public because they don’t want to take a chance of getting coronavirus.

“A lot of people think I’m crazy,” said Jerry Calhoun, referencing his decision to wear a mask in public. “But why take a chance?”

In terms of wearing masks, Jerry Calhoun said, “I went to war and my father went to war for you to have your right but we that wear masks have a right not to be infected, so your freedom comes with a cost. You can’t just go out and do whatever you want without other people having to pay for it.”

Jerry Calhoun was shot through the ankle during his time in Vietnam and was medevaced to a hospital in Japan.

“I just feel like it’s protecting other people, too,” Lorna Calhoun said of wearing masks.

Jerry said he’s the type of person who likes to stay busy but he thinks it’s prudent to follow the mandate by Gov. Brown. Jerry and Lorna are in their 70s, and he is especially at risk with Type II Diabetes if he gets infected with COVID-19.

“Sitting at home is driving me crazy but you know what, life is too short,” Calhoun said. “God only gives us one life and we better do it right.”

“Some people can get it and go through hell and get over it and some of us can’t,” he added.

“It only takes one person, one person to get out amongst people.”

For David Blanchard, of Klamath Falls, the COVID-19 pandemic did not keep him from attending the unofficial Memorial Day event, and without a mask.

Blanchard said he’s willing to take the risk of getting infected with COVID-19 in order to practice those freedoms.

“People still have the freedom to stay at home,” he said.

“Government can never give you freedoms, it can only take it away.”

Blanchard initially heard there would not be a traditional parade but wanted to show support for those who have served, including his late father, Elmer Blanchard.

He felt a sense of duty to honor those who gave their lives in service, even without an official parade.

“I didn’t know anybody else was going to be here,” Blanchard said. “I was going to walk down Main Street with my flag.”

He said his wife was going to drive behind him with her “flashers” on. They were both surprised when they arrived downtown to find the cruise.

“I thought, ‘Holy cow, spontaneity is alive,’” he said.

Blanchard, at the park, held out a photograph of Elmer Blanchard that he’d retrieved from his vehicle.

“I was going through his scrapbook and pictures and found this,” Blanchard said. “This was two days before he was wounded.”

The late Blanchard contracted Malaria after serving overseas and was housed at the U.S. Marine Corps barracks on Old Fort Road during World War II.

David Blanchard said his father would talk about playing clarinet and alto saxophone in bands during the war, such as the Baldy Evans Band and U.S. Marine Corps Band. He didn’t want to talk as much about his service in the war, though.

“He didn’t talk about it much but he showed me the bullet wounds and he had shrapnel on his face,” Blanchard said of his father.

Blanchard emphasized that demonstrations like the cruise and gathering at the park are examples of rights that men and women died to protect.

“People died for our freedom to do this and it offends me that people ... they think they have the power to take that away from us,” Blanchard said. “It’s almost like another revolution.”

To date, there have been 41 total cases of COVID-19 in Klamath County, which include 33 recoveries, eight active cases, and zero deaths.