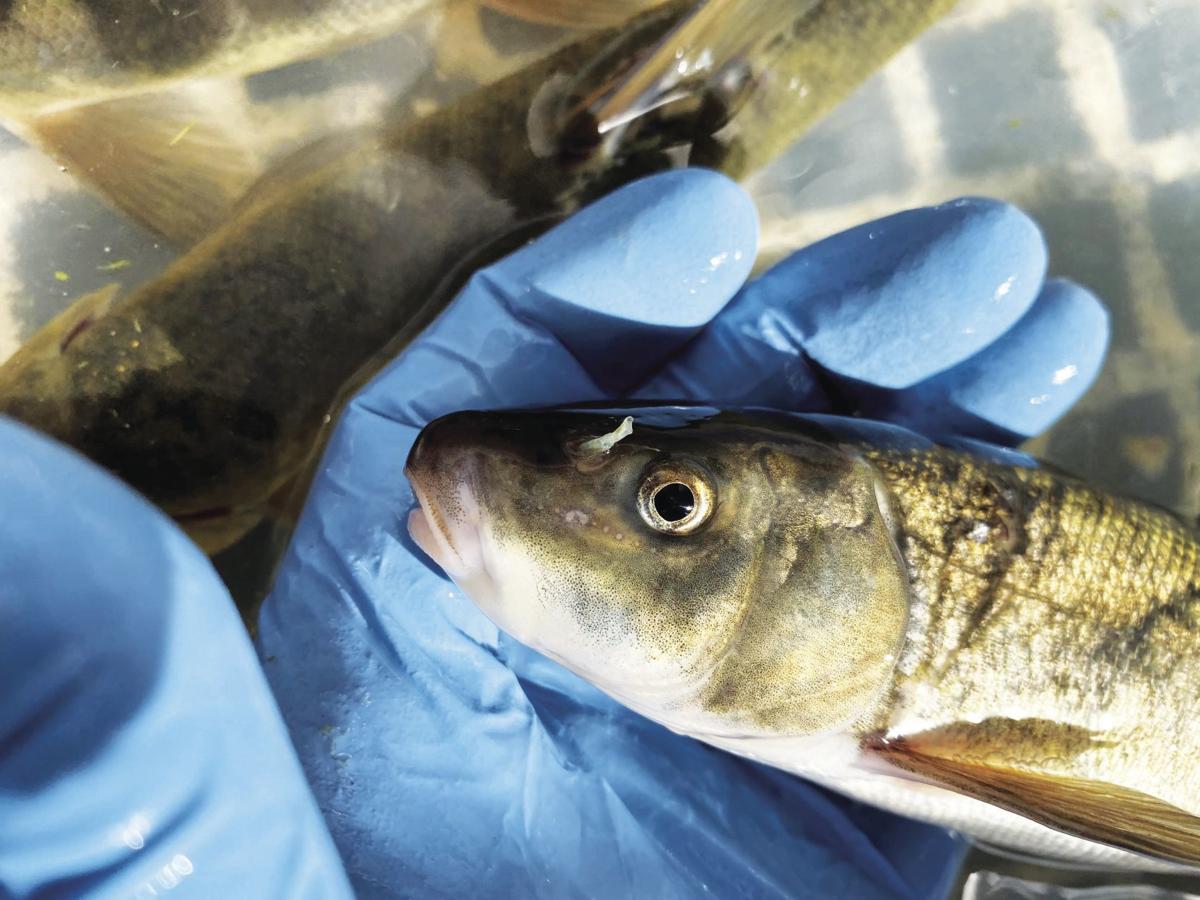 A U.S. Fish and Wildlife Service employee holds a sucker impacted by parasites in Upper Klamath Lake this summer. 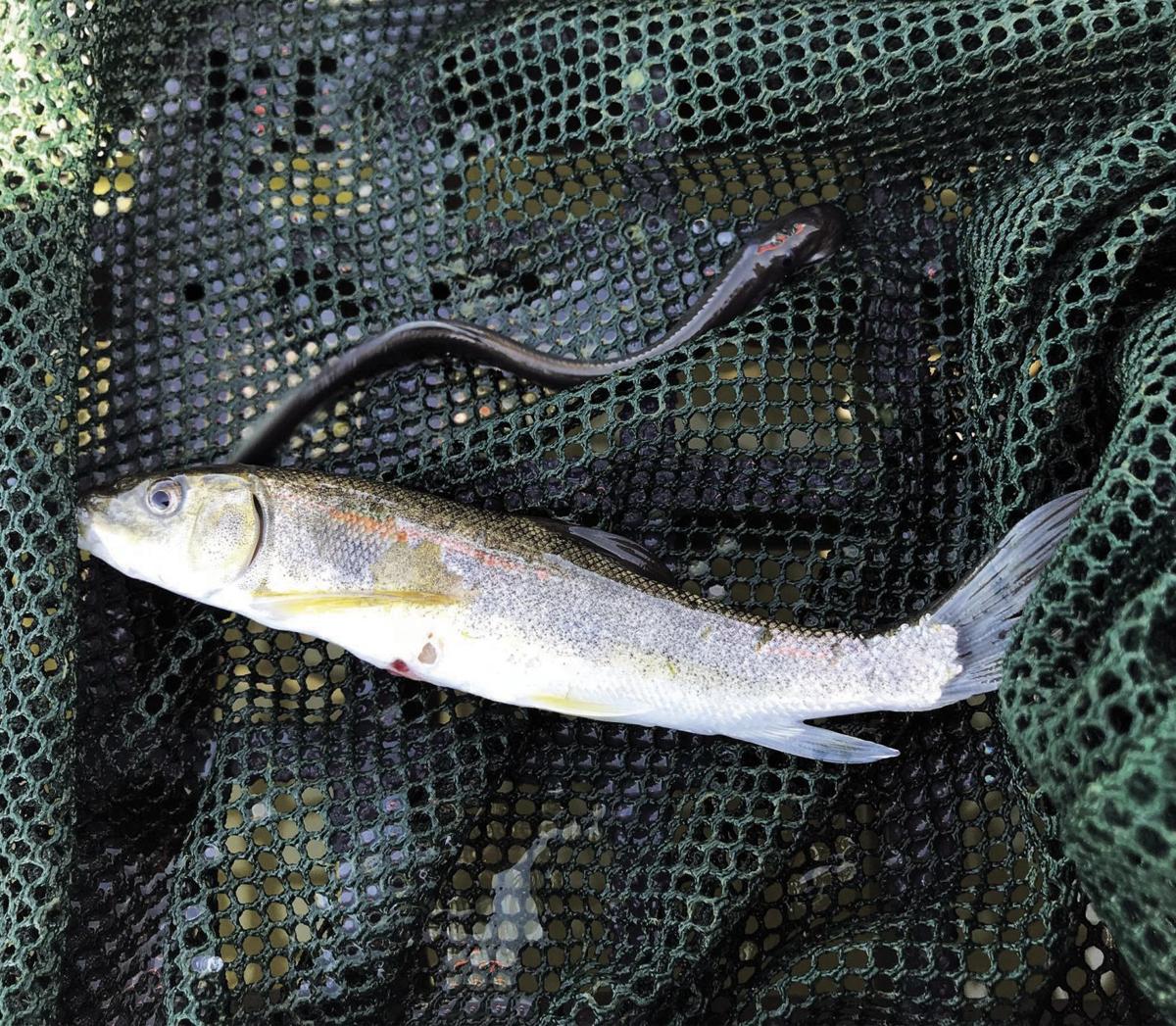 Out of 1,000 Klamath Basin Sucker placed in floating net pens in Upper Klamath Lake this Summer by U.S. Fish and Wildlife Service, only 10 survived. Those 10 were plagued by Lamprey wounds and parasites.

A floating pen that can hold two separate populations of juvenile Klamath Basin sucker has been set up temporarily off Modoc Point, located off of Highway 97 East, in Upper Klamath Lake. 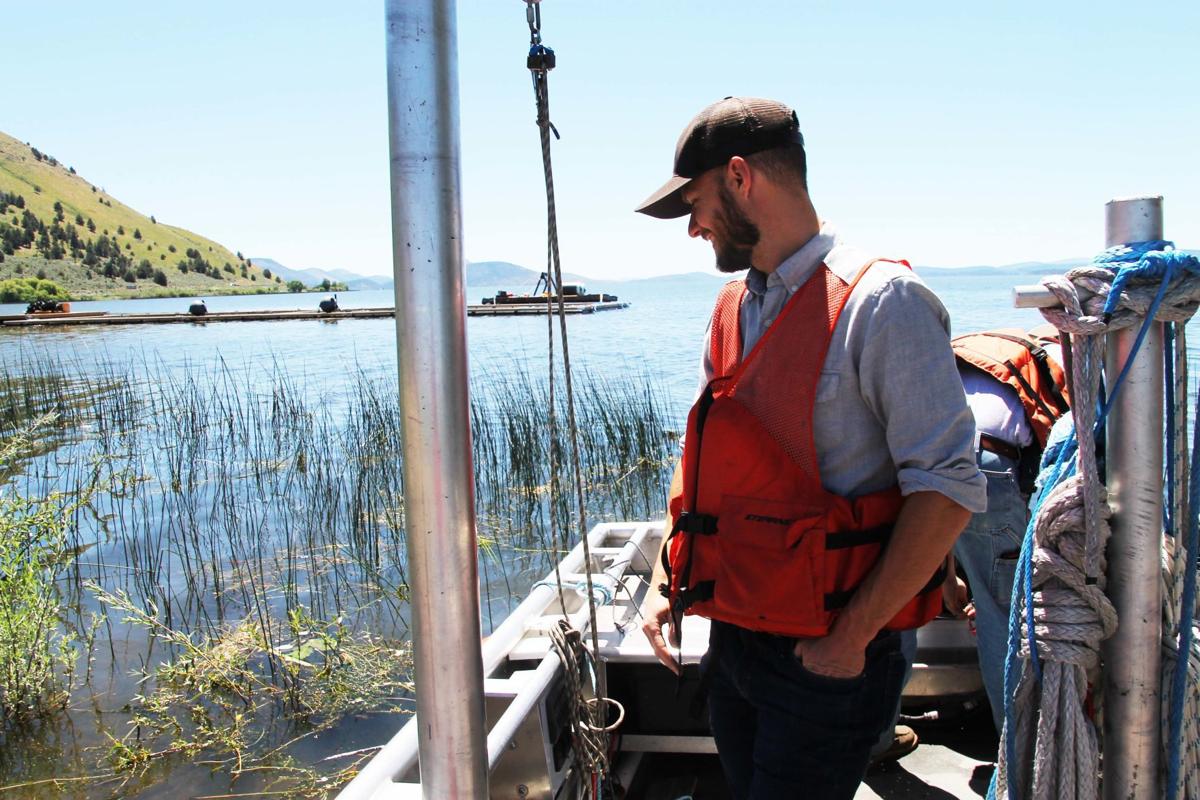 A U.S. Fish and Wildlife Service employee holds a sucker impacted by parasites in Upper Klamath Lake this summer.

Out of 1,000 Klamath Basin Sucker placed in floating net pens in Upper Klamath Lake this Summer by U.S. Fish and Wildlife Service, only 10 survived. Those 10 were plagued by Lamprey wounds and parasites.

A floating pen that can hold two separate populations of juvenile Klamath Basin sucker has been set up temporarily off Modoc Point, located off of Highway 97 East, in Upper Klamath Lake.

Most of the Klamath Basin suckers testing the waters of Upper Klamath Lake this summer in floating net pens are thought to have died during a federally-funded summer pilot project.

Childress said the results stem from working within the confines of “science in action” with an endangered population. The sucker hasn’t made it to adulthood in two decades and the agency is trying to find out why, and what can be done to save them from extinction.

Childress admitted when asked that he was disappointed in the outcome of the project but that the team behind it is undeterred.

“The state of the Sucker populations here is so dire that … we have to throw stuff at the wall and see if it sticks,” Childress said. “You have to try a lot of stuff and see which one hits the target.”

The $242,710-pilot project steered by Childress and a group of biologists with Congressional funding is leading them to identify a need to release fish when they are bigger.

One parasite attacking the fish is Lernea, a tiny, external crustacean parasite that sucks the blood from the fish.

“They had them all up in their nairs, which are essentially their nostrils,” Childress said.

“Each one would have 20 or 30 of these parasites on them. A bunch of them had Lamprey wounds ... The water quality also is a concern,” he added.

“You can see the Lamprey scars on some of the adults,” Childress said. “But they’re able to survive that. And you don’t see this kind of infestation of Lernea.”

Lamprey are native to Upper Klamath Lake and aren’t considered the only factor in the matrix that leads to their survival or demise.

“They could be a piece of it,” Childress said, of the Lamprey.

“We don’t know very much about it. It was intriguing to see this many fish with the injuries that we saw from the Lamprey. I definitely would not draw the conclusion that this is what’s causing it.”

“They’ve always been here so for that to be the reason, something else would need to change,” Childress said. “Their population would need to be artificially high or the suckers would need to be more vulnerable than they used to be, and we don’t have any reason to expect that those things are occurring.”

Childress said he could see evidence of some potential sick fish near the surface in June, prior to Sen. Merkley’s visit in August.

“We went out mid-Summer when the pH was very high, and we saw sick fish,” he said. “They were not doing well, they were near the surface and not navigating well.”

“We’re going to adjust some things and be a little bit more intensive about it,” he added.

Childress said it’s not clear how to protect the fish from parasitic attacks, but anticipates needed to install mesh that can keep Lampreys from preying on the Sucker.

“We’re going to monitor it very closely so that we can be sure to understand what’s going on,” Childress said.

Only the big fish survive

“No 1-year-olds survived,” Childress said. “So, that says, let’s not release 1-year-olds. And the 2-year-olds that survived, only one of them was smaller than average so the rest of them were average or above average so … they were all relatively large for their age.

“The biggest lesson, we’ve got to get them big,” he added.

In 2020, Childress said the federal agency will be able to release 3-year-old fish for the first time.

“We’re hopeful that those are going to survive at higher rates,” Childress said.

Childress said it’s common for areas trying to raise sucker to survive in the wild to increase the size of the fish. Such is true for those propagating Razorback Sucker and June Sucker in Utah and Colorado.

“Our initial target was 200 millimeters or about eight inches and all those programs have increased their targets to 300 millimeters or 350 (millimeters),” he said. “They’ve basically found that they’re not surviving when they release them at smaller sizes. And so, we’re learning those same lessons here and despite the potentially different reasons for not making it, it seems that size is going to be important kind of across the board.

Childress is leaving his post after serving with U.S. Fish and Wildlife Service in Klamath Falls for almost three years. He emphasized the Sucker recovery team in place will keep the effort going.

U.S. Fish and Wildlife is currently looking for a new lead to take charge of the sucker recovery program.

“We’re not losing the institutional knowledge with my departure,” Childress said.

“The staff is going to carry this forward.”

He said despite the loss of the fish, there will still be an expansion of the sucker-rearing ponds at the Gone Fishing facility, located outside of Klamath Falls. Additional ponds are hoped to finished in 2021, he said.

Sen. Merkley has previously secured $3 million to expand the Gone Fishing propagation facility, which he also toured this Summer for the first time.

“We’ve probably quadrupled or more capacity, and we’ve learned a lot about how to raise these fish,” Childress added.

As far as the loss of Suckers in Upper Klamath Lake, he’s optimistic that the federal agency can try again in 2020 with older, bigger fish.

“This isn’t a waste, it’s an opportunity to learn and do it better,” Childress said. “It’s pretty clear from the results that larger fish did better.

“We need to be supplementing feed, we need to be getting them as big as we possibly can to make sure that they’re fat and happy out there in the lake.”.