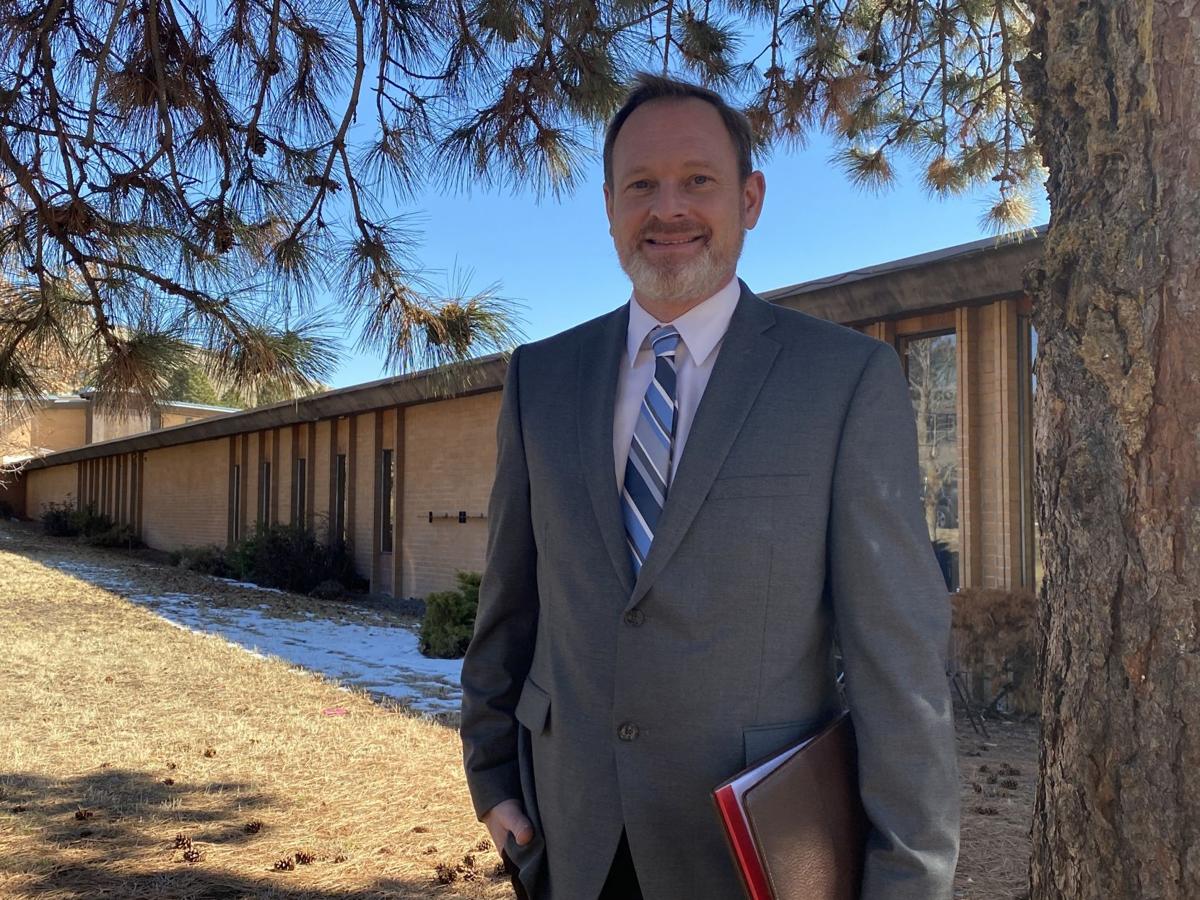 Jeff Bullock is one of two finalists for Superintendent of Klamath Falls City Schools. Bullock took part in a virtual forum Thursday night and interviewed with school board members on Friday. 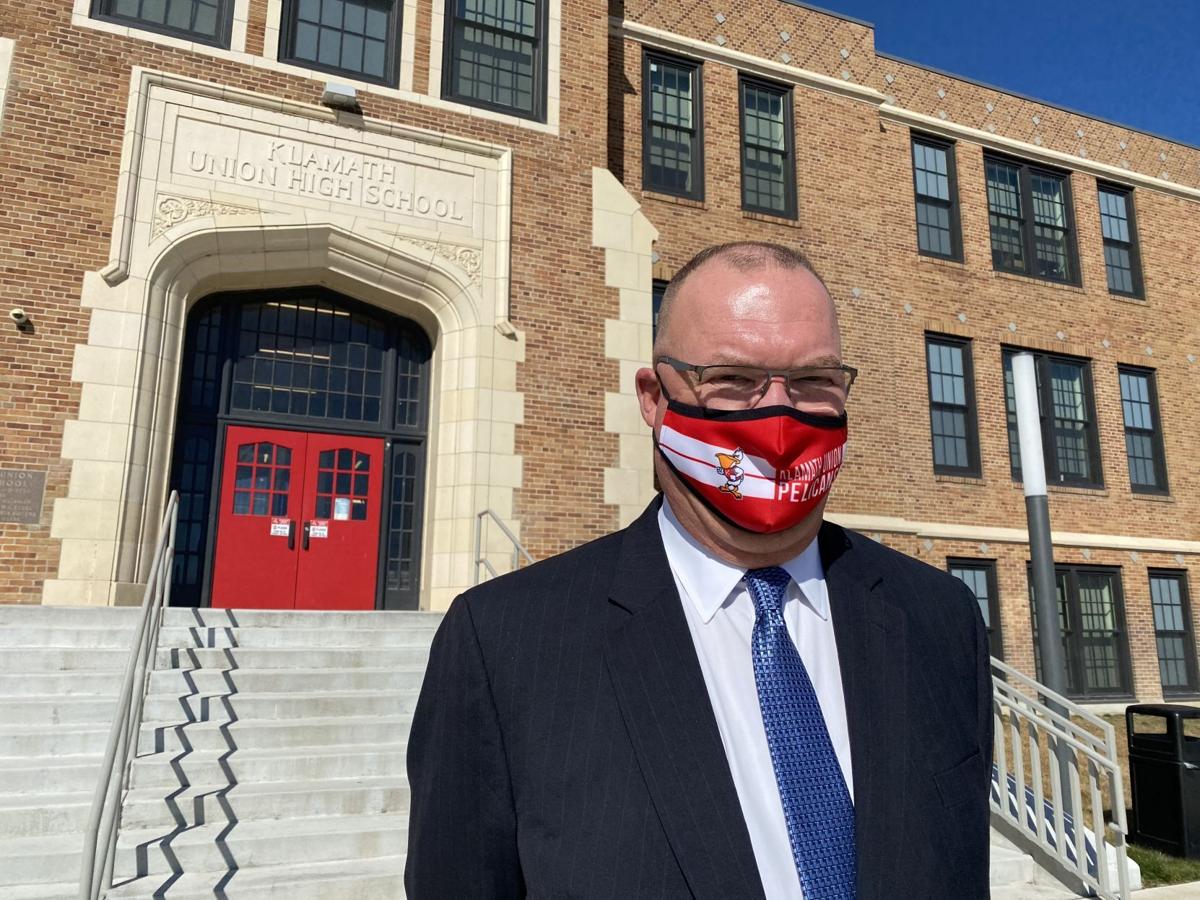 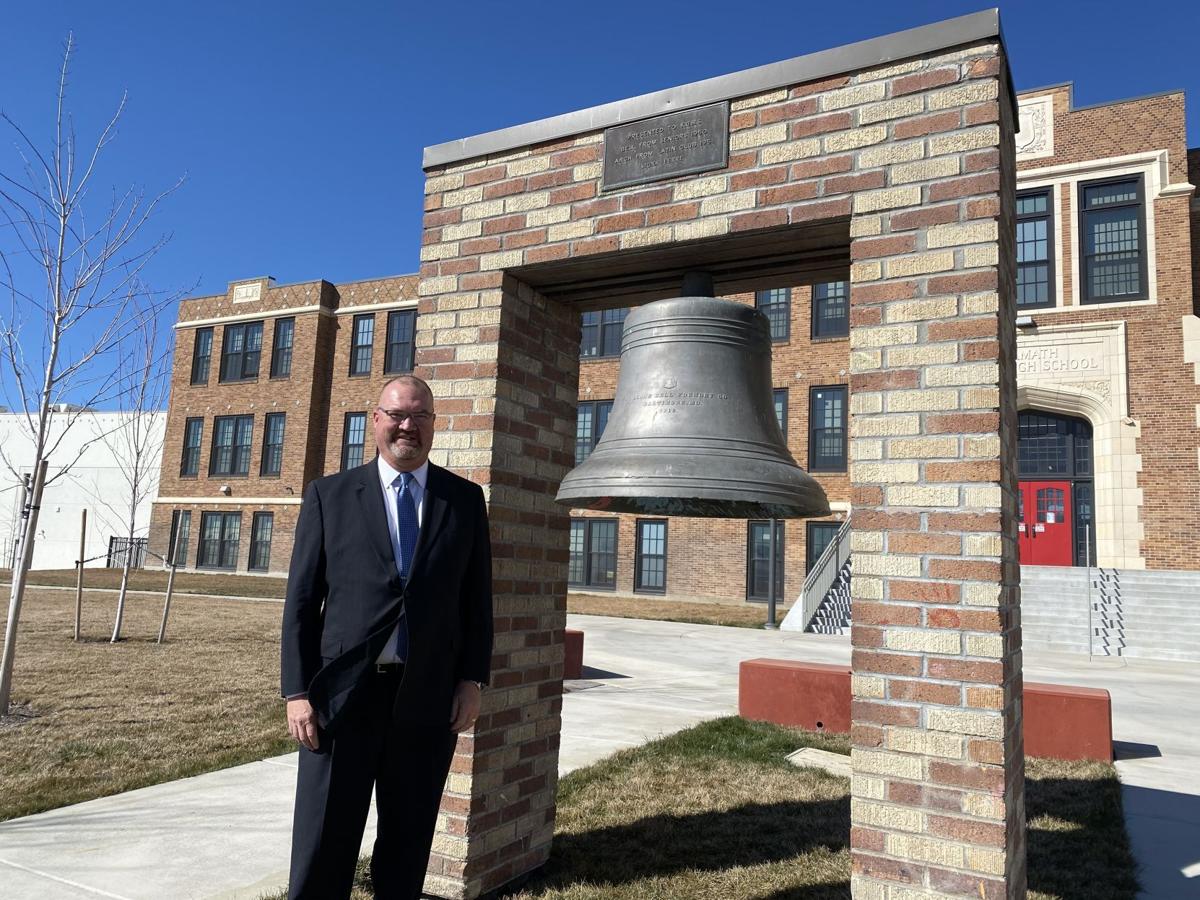 Keith Brown, one of two finalists for Superintendent of Klamath Falls City Schools, toured schools and participated in a virtual forum on Thursday. Brown also interviewed with school board members on Friday. 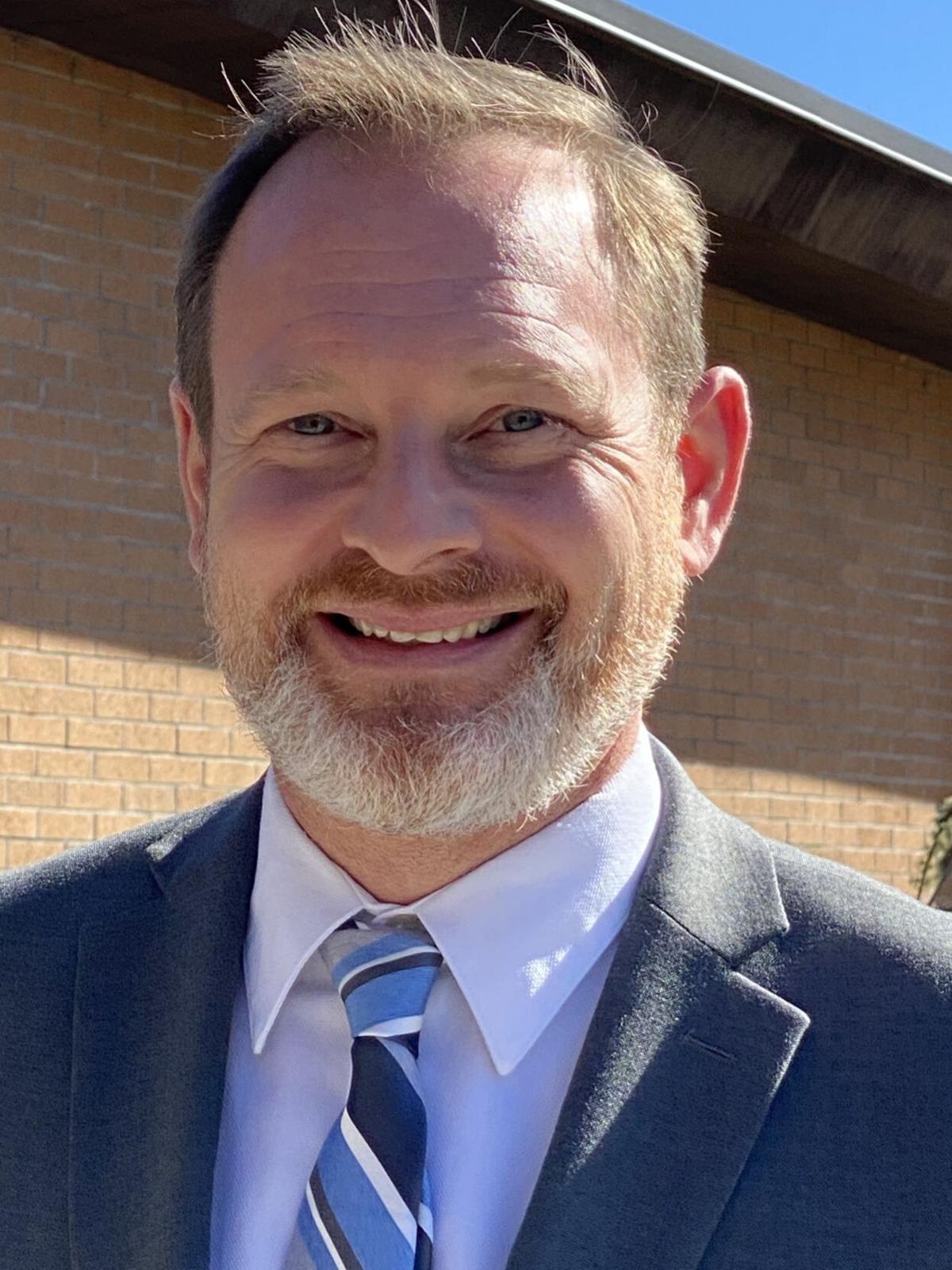 Jeff Bullock is one of two finalists for Superintendent of Klamath Falls City Schools. Bullock took part in a virtual forum Thursday night and interviewed with school board members on Friday.

Keith Brown, one of two finalists for Superintendent of Klamath Falls City Schools, toured schools and participated in a virtual forum on Thursday. Brown also interviewed with school board members on Friday.

Local residents got a front row, virtual seat Thursday evening to ask finalists for superintendent of Klamath Falls City Schools what qualifies them for the job.

Finalists Keith Brown, of Texas, and Jeff Bullock, of Klamath Falls, shared their passion for education and students, administrative accomplishments, and their plans for their first 100 days if selected for the position during the virtual community forum, which drew more than 100 attendees.

Finalists were selected from a pool of 14 applicants, according to the school district’s website.

Brown, who comes to the district most recently retiring as superintendent of Taylor Independent School District in Texas, has 27 years of administrative experience, 17 of which he has served as a superintendent.

During his first 100 days in the position, Brown said he would work to foster positive working relationships with staff and community. He also plans to review the budget, board agendas and financial audits for the school board for the last few years to gauge priorities. Identifying efficiencies and improvements and creating a strategic facilities plan, based on community need and input, are also top priorities in order to address aging facilities such as Ponderosa Middle School, according to Brown.

Brown said he would also meet with a staff equity officer to review any findings or recommendations for the district.

“The way we provide equity for that is making sure they have all the support and resources they need,” he said.

Brown emphasized he would ensure that teachers have the training necessary and that there would be opportunities for growth.

Brown said he uses a transformational leadership style, where he emphasizes encouragement and setting clear goals. He also shared how he used mentors to move his career forward and returned the favor with other teachers and superintendents.

“I am very personable, approachable, accessible, and I relate well with diverse groups of people,” Brown said.

Brown shared about his work serving diverse and disadvantaged populations in Texas as well as procuring grants. He helped to spur a partnership between Peterbilt and a high school in Taylor, Texas, that gave high school students the opportunity to learn trade skills through a partnership.

He applied for the position in Klamath Falls largely out of an interest in relocating to Oregon and continuing to serve in a superintendent role. He and his wife enjoy the region and want to retire in Klamath County.

During a break from touring KU on Thursday morning, Brown sat down with Herald and News to talk about his experience and about the nuances of the position. He acknowledged that some aspects would be a “crash course” in learning the nuances of the Klamath Falls role, such as aspects that set Oregon apart in terms of school finance laws.

He called collaboration and partnerships key to the job and said he hopes to work with Klamath County School District wherever possible.

During his tour of city schools campuses on Thursday, he found staff to be highly qualified and proud of their district.

“The faith and the belief in Klamath Falls City Schools is very evident,” Brown said during the forum. “For somebody like me who has done this their entire career, it lights your fuse, it makes you want to take off and fly.”

Bullock the local face in the race

Jeff Bullock would bring 25 years in total education experience, 19 of them at Klamath Falls City Schools and Klamath County School District, along with a well-connected professional network to the role.

Bullock has served as secondary curriculum director for Klamath County School District for the past seven years, and served as principal at Klamath Union High School for nine. Bullock also taught science and social science at Mountain View High School in Bend before moving to Klamath Falls, where his wife grew up.

“In a lot of ways, that network is more important than the initial knowledge,” Bullock said. “I bring a network of Southern Oregon (Education Service District), partners in Klamath, working with the Oregon Department of Education in Salem, and working and collaborating with districts all around Southern Oregon … It’s that network that builds partnerships, that builds programs, that brings in additional resources.”

Bullock said he would bring a visible and visionary style of leadership, and would hold a listening tour of the community and the district during his first 100 days. He emphasized seeking feedback as key to the position.

“When you’re investing 80 to 85% of your budget into people, you had better be working in collaboration with them, you’d better listen to them,” Bullock said. “You’d better look for the collective wisdom of the … people who are in face-to-face contact with kids, families, and parents.”

“It is important that we are responsive to our community because it’s a partnership and it’s working together that we succeed,” he said.

Bullock emphasized that while there is much to do in the first 100 days of the role, “providing leadership to a school district is not a sprint.”

He prefers to look at his priorities over the course of upwards of a decade or more as he is committed to remaining in Klamath Falls.

Bullock hopes to first develop and build on working relationships and friendships with the current school board. He wants to know what board members are excited about and how can he as superintendent come alongside in those goals.

“When the leaders are working together, positive, communicating, have rapport with each other, that’s going to impact the whole organization in a way that’s very positive and leads to success,” Bullock said.

Bullock expressed an interest in building on current partnerships and exploring opportunities for more. He wants to re-engage students in full-time, in-person learning as soon as possible.

Bullock said he wants to add in-depth knowledge of school finance in Oregon and grant structure to city schools. He was the lead grant writer for the first seismic grant for the retrofit of Mills Auditorium at Mills Elementary, the first grant of its kind awarded to either KFCS or Klamath County School District at the time.

“Understanding the grant structures and the ability to apply for and obtain grants is critical,” Bullock said. “I’ve been highly successful in obtaining additional grant dollars for school districts.”

Bullock shared that he also spurred the idea for hosting a conference on trauma-informed practices at Running Y Resort, which drew attendees from all over the state.

He emphasized the importance in having a variety of programs to offer students and how that impacts graduation rates. Bullock said there has been a 15% increase in graduation rates during the time he has served as secondary curriculum director.

“When we can offer students programs that lean toward their different interests, that leads to better academic outcomes and a higher graduation rate,” Bullock said. “We’ve seen this in the county school district, as we have built and sustained numerous student programs and our graduation has gone up considerably.”

Bullock said he was approached with the job possibility by members of the community.

The job possibility got him thinking and looking at the landscape of the school district and how it could look in the near future.

“We could really be in some good places, building on this foundation, and just getting excited about what that would look like and wanting to be a part of it and help lead it,” Bullock said.

A selection is scheduled to be announced at the March 8 school board meeting.