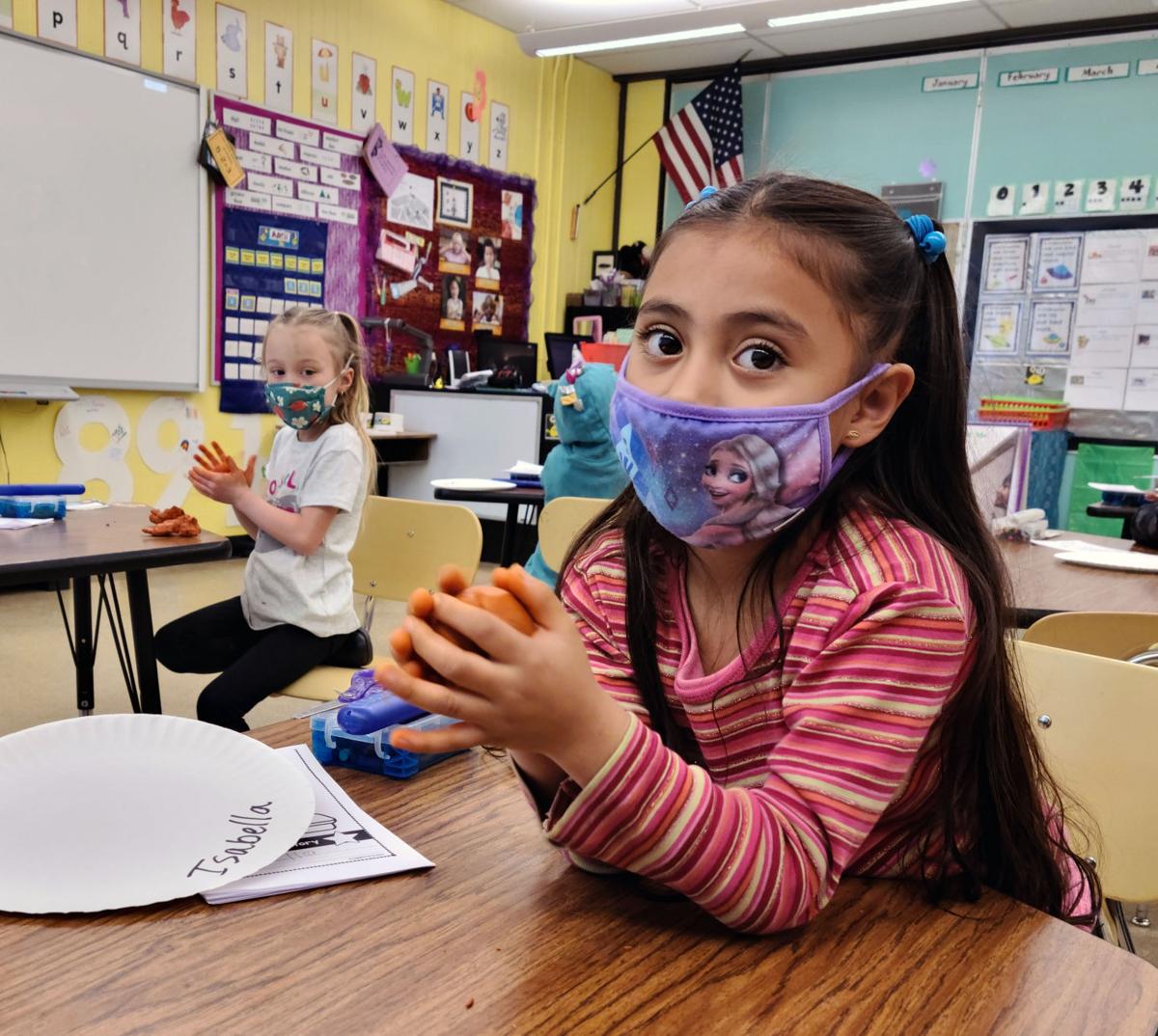 Kindergarteners in Tracy Cerri’s class at Shasta Elementary School create clay wombats as part of a project on the first day back to a full-time schedule. 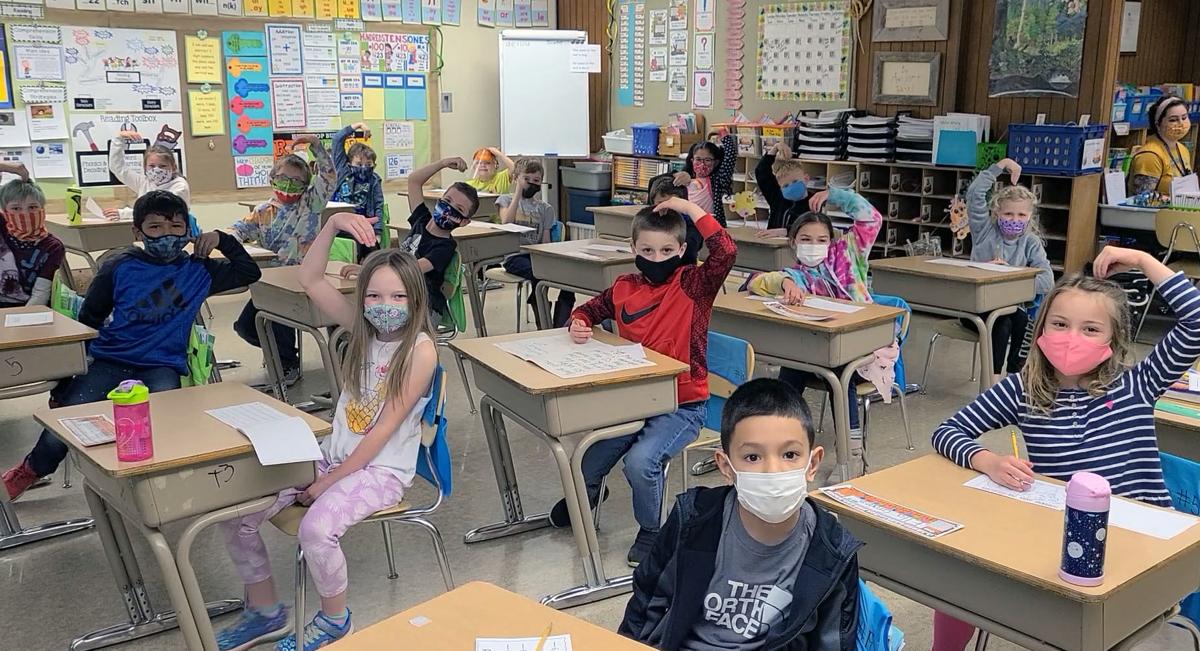 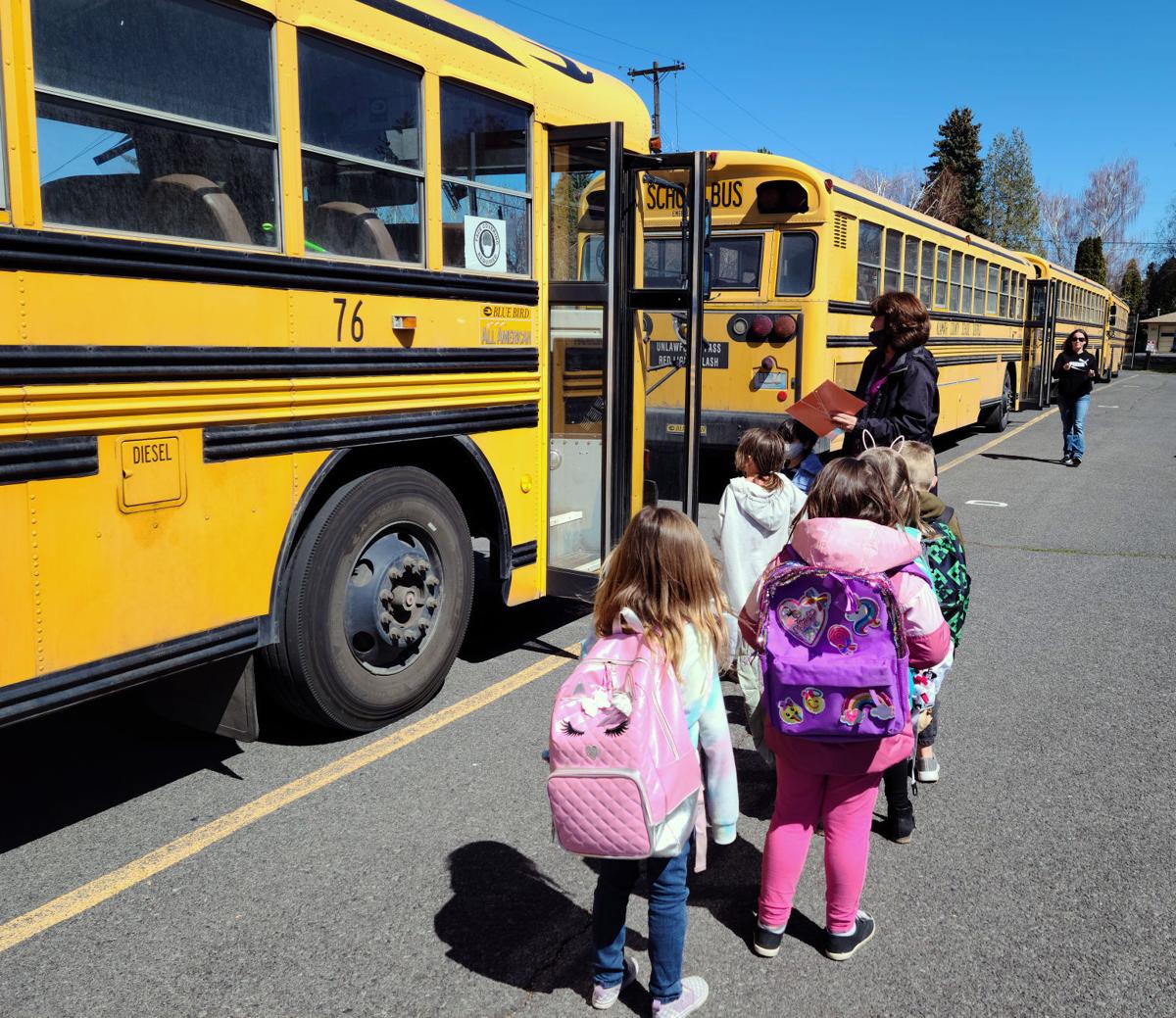 Peterson Elementary School kindergarten teacher Geralyn Smith leads her students to their bus at the end of day Monday.

Kindergarteners in Tracy Cerri’s class at Shasta Elementary School create clay wombats as part of a project on the first day back to a full-time schedule.

Peterson Elementary School kindergarten teacher Geralyn Smith leads her students to their bus at the end of day Monday.

Although it may include a slight learning curve, students, staff and teachers are ready to return to full in-person school schedules.

That transition started Monday in many Klamath County schools.

The state changed its social distancing requirements from six to three feet, allowing for the return to full school days for most students in Klamath County School District. Students in K-6 started full-time schedules on Monday, and grades 7-12 will start April 12. Klamath Falls City Schools was prepared to vote on their next steps for city schools on Monday night. The result was not available by press time.

School officials say the return to full-time schedules will not be affected by rising COVID-19 counts in the county and state, unless the virus spread is tied back to schools.

Randy Rose, principal at Shasta Elementary, was a few minutes away from releasing more than 600 elementary students on Monday afternoon during an interview with Herald and News. That’s roughly twice as many students he would have on a regular day of hybrid learning.

“By no means is it back to normal,” Rose said. “The only thing that’s normal is that we’ve got our normal amount of kids back.”

Rose said he and the staff are excited to have students back in a regular schedule, though he anticipates some aspects to be a challenge.

“A lot of kids were kind of in shell shock a little bit this morning,” Rose said. “They walked in their classroom and there’s 25 or 26 kids instead of 12 or 13. That’s a huge challenge but it’s all worth it ... kids need to be in school.”

Rose anticipates there will be a learning curve for teachers too. They will have to adjust to more students after leading smaller classes for months.

“They will meet the challenge, but it’s going to be a lot of pressure on them (teachers) for the first couple days as they get back to the rhythm of things,” Rose said. “When you haven’t done something for almost 400 days, it makes it difficult.”

“It’s not like a light switch,” Rose added. “It’s not something you can turn on and off.”

He anticipates some behavioral issues for students toward the end of the week, as students navigate all the changes.

“I think our kids are going to be pretty tired by the end of the week,” Rose said. “It’s a major change to see kids for two days and we would not see them for five days and we just now flip-flopped that.”

The transition to a return to full school days comes as cases of COVID-19 are back on the rise, but school officials said it shouldn’t impact the return, unless cases spread within the schools.

“If we had a crazy outbreak in Klamath County, that’s not going to affect us unless that outbreak started to trickle into our school,” Rose added.

Lane sees the transition for students as an important step to improving their mental health and well being.

“We’re not seeing young children spread COVID in the way that we thought a year ago that they would,” Lane said. “For us to expect that the schools are going to be part of a fourth surge … I don’t anticipate that that’s going to be an issue,” Lane said.

Students still have the option to attend classes online and via home school options.

Henley Middle School Principal Kristine Creed said this week serves as a “dry run” for the return to full-time schedules for her middle school students, to help prepare them for the full return next week.

“There’s so many variables with people delivering students to school and busing and that sort of thing that it’s always better to be prepared and stagger and go in a little bit slower and make sure you’ve got all your bases covered,” Creed said.

Seventh and eighth graders will remain in three cohorts, also known as pods, within the school. Creed believes the return will help students emotional and social well being just as much as their education.

To prepare for a full week’s schedule, the school has moved the cafeteria space into the gymnasium. The choir room, which will soon have double the students, will move to the cafeteria. Physical education classes will take place outside.

Even with the changes, Creed is excited for the changes, especially for students in middle school, who are still developing social skills.

Creed said students and staff are anticipating the “first day” of a full schedule, just as if it were the very first day of school.

“There’s electricity in the air like it’s the first day of school,” Creed said. “We are so excited. We want nothing more than to have our students in the building because that’s what we do.”