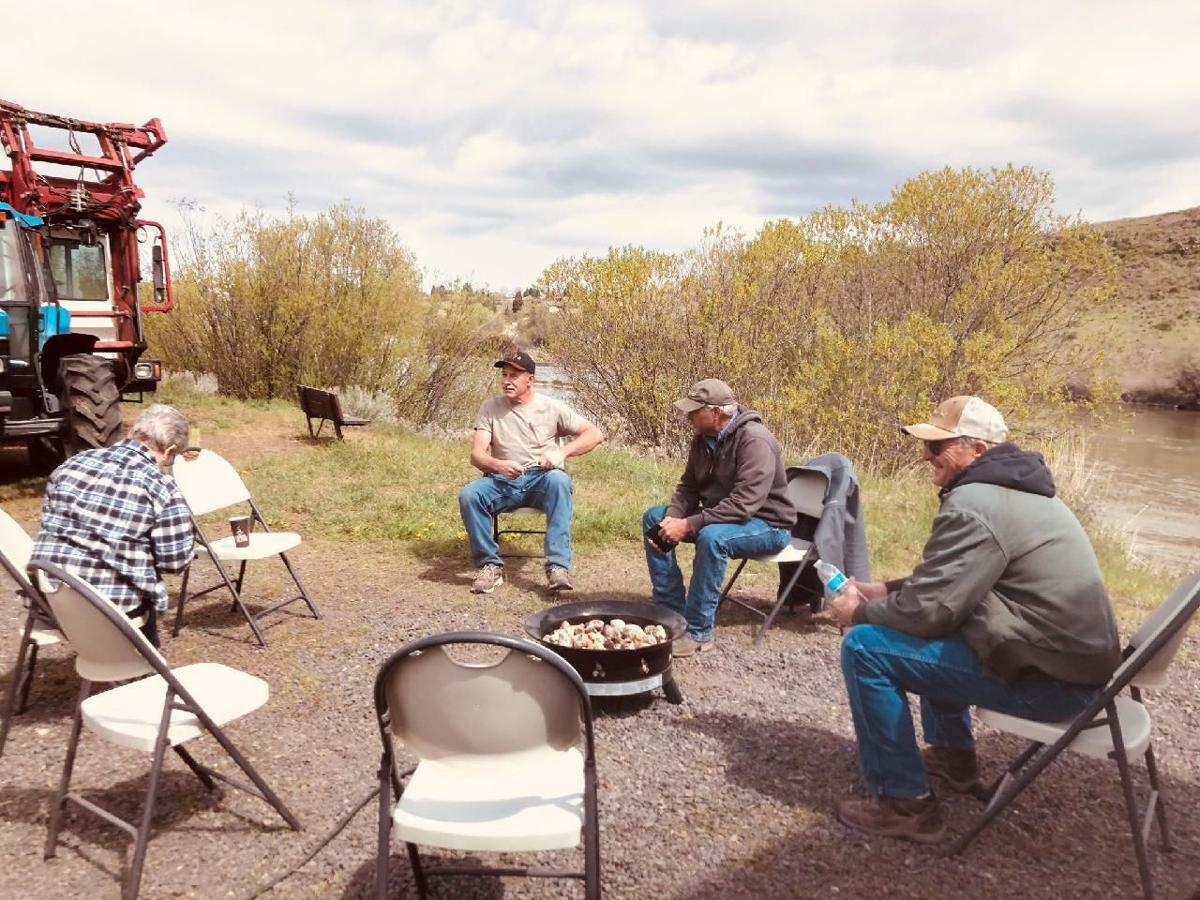 A group of irrigators on Monday morning gather near the Link River Dam in protest of Bureau of Reclamation’s use of water from Upper Klamath Lake. 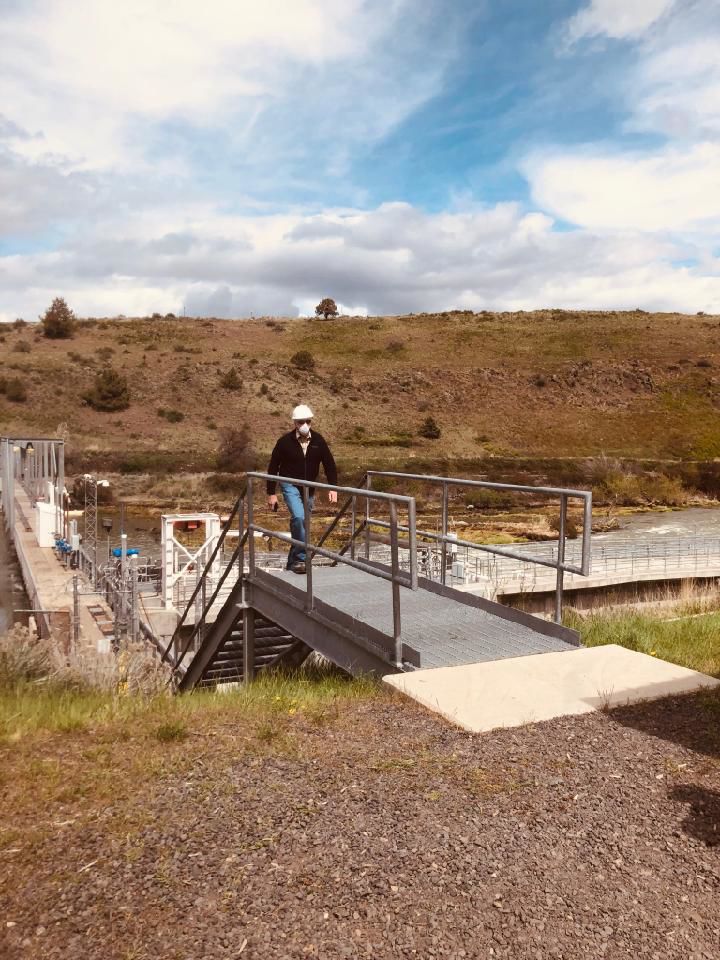 Jeff Nettleton, manager of the Klamath Basin Area Office of the Bureau of Reclamation, walks up the stairs at the Link River Dam on Monday afternoon, following the reduction in flows.

A group of irrigators on Monday morning gather near the Link River Dam in protest of Bureau of Reclamation’s use of water from Upper Klamath Lake.

Jeff Nettleton, manager of the Klamath Basin Area Office of the Bureau of Reclamation, walks up the stairs at the Link River Dam on Monday afternoon, following the reduction in flows.

Some Klamath Project water users on Sunday and Monday protested the U.S. Bureau of Reclamation’s use of water at the Link River Dam, at one point voicing plans to stay near the dam until Reclamation followed Oregon water law.

Irrigators took their personal property and belongings from the area by Monday afternoon, following the ramp down of flows on the Link River Dam by Bureau of Reclamation officials. The protest started Sunday evening with upwards of 30 irrigators gathering near the entrance to the dam, which is owned by Reclamation and used to regulate Upper Klamath Lake levels and Klamath River flows at the direction of Reclamation. At issue was whether Reclamation is following Oregon water law in doing so.

An interim order put in place by Oregon Water Resources Department on April 21 gave the state agency charge over the water distribution and demanded that Reclamation not use water from Upper Klamath Lake, including in a flushing flow down the Link River Dam, unless it follows specific guidelines outlined in the order. The order has not stopped the recent 40,000 acre foot flushing flow meant to promote the health of juvenile coho salmon, but Reclamation had already started to ramp down the flows at the Link River Dam.

Klamath Basin irrigator Shane Cheyne, who was among those gathered at the Link River Dam most of the day Monday, said a group of irrigators had asked Sunday evening for Bureau of Reclamation to ramp flows down to 600 cubic feet per second by Monday morning.

“They’re still taking more than what the state says is legally what they should,” Cheyne said, “but we’re just trying to take it one day at a time, one step at a time, and take a small victory.

“They could’ve done the right thing to begin with and we never would’ve been here before,” Cheyne added.

Dan Nielsen, Klamath Irrigation District board member Grant Knoll, and several others sat around a charcoal fireplace set up outside the entrance to the dam Monday morning, talking about what led to the protest.

“We’re just up here trying to protect our property right,” Nielsen said, adding he has lived in the Klamath Basin since 1976. “The federal government’s stealing from us.”

Knoll said he would stay as long as needed until Reclamation was following state water law.

“We’d like the Secretary of the Interior to enter into a contract to buy stored water from the irrigators so they can continue to run water down the river lawfully, and abide by state and federal,” Knoll said.

It was unclear whether such a request to the Secretary of Interior David Bernhardt was made on Monday.

Law enforcement and Reclamation officials were on hand, as well as Klamath County Commissioner Donnie Boyd. Boyd spent much of the day with irrigators, facilitating talks.

“I believe that the people who were at the Link River Dam got the attention of the federal government today,” Boyd said.

By mid-afternoon on Monday, PacifiCorp workers were ramping down flows at the dam to 1,700 cubic feet per second, and that was followed by many irrigators removing their belongings from the area near the dam.

Reclamation officials have said they will continue to follow federal law following the interim order by OWRD.

“We’ve been trying to work with the water users and these folks on all of this,” said Jeff Nettleton, manager of the Klamath Basin Area Office.

“I understand their concerns,” he added.

Nettleton was with crews at the dam, all wearing masks in light of the COVID-19 pandemic, as they brought flows down to 1,700 cubic feet per second.

“It’s what we would’ve done although we’re a little bit behind schedule because of the situation here,” Nettleton said.

“Reclamation’s just working really hard to use all the tools in the toolbox to help the water users, the Project, the downriver needs for the salmon and the needs in the lake and the Suckers. We’re just trying to work with all the different needs in the Basin to maximize the best use of the available water that we’ve got. It’s just a really hard year,” he described.

Klamath Water Users Association, which represents various irrigation districts in the Klamath Project, also released a statement on the protest: “Klamath Water Users Association is devoting all of its time and effort toward helping producers make it through a bad year and working constructively with the Department of the Interior on this year and future years’ Klamath Project operations. We had no prior knowledge of the protest activities at Link River Dam, and the overwhelming majority of farmers and ranchers in the Klamath Project have had no involvement with that activity. KWUA recognizes and strongly supports the rights of assembly and speech including peaceful protest. We will unequivocally condemn any acts of property destruction, violence, threats, or intimidation.”

Irrigators who gathered were on PacifiCorp land but PacifiCorp did not ask the police department to tell them to leave, according to Chief of Police Dave Henslee at midday.

Bob Gravely, spokesperson for PacifiCorp, said on Monday morning the company was aware of the protest and company officials were working with law enforcement and Reclamation officials throughout the day.

“PacifiCorp and Reclamation were able to access the dam mid-afternoon without incident to adjust the flows consistent with Reclamation directives,” according to a statement from Gravely late Monday.

Passersby continued to walk dogs and walk and run on the Link River Trail throughout the day Monday as irrigators gathered.

Henslee described the protest as “peaceful.”

“There wasn’t any property damage, there was no threats to anybody’s welfare or personal health,” Henslee said.

“I didn’t get the perception that there was any interference to public traffic through there,” he added.

Henslee said he was on hand to help protect the irrigators’ right to a peaceful protest.