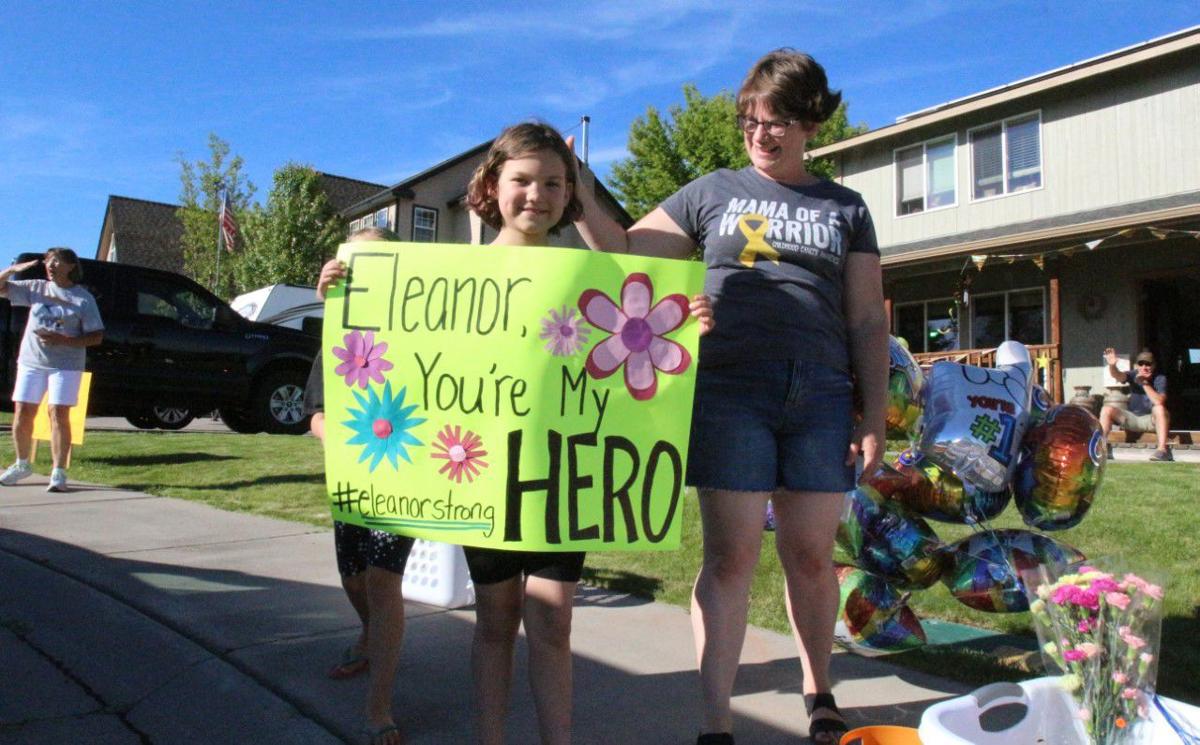 Eleanor Pine, 9, poses with a sign made for her by a family friend, while her mom, Michelle Pine, right, looks on. The family celebrated Eleanor’s last day of at-home cancer treatment on Thursday with a car parade in their neighborhood. 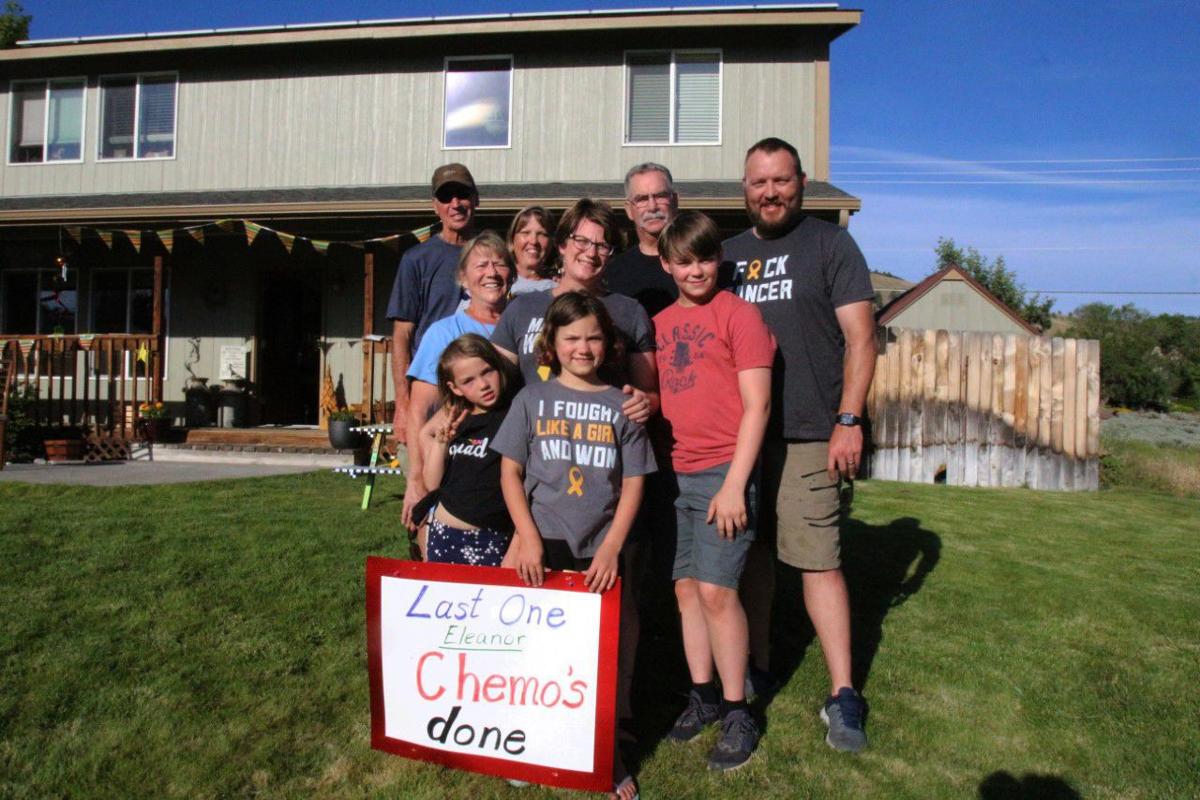 Eleanor Pine, down front and center, stands with her family on Thursday outside their home after a car parade to celebrate her last day of at-home cancer treatment.

Eleanor Pine, 9, poses with a sign made for her by a family friend, while her mom, Michelle Pine, right, looks on. The family celebrated Eleanor’s last day of at-home cancer treatment on Thursday with a car parade in their neighborhood.

Eleanor Pine, down front and center, stands with her family on Thursday outside their home after a car parade to celebrate her last day of at-home cancer treatment.

After 799 days of cancer treatment and many trips to Medford and back, the Pine family, of Klamath Falls, breathed a collective sigh of relief coupled with cheers for new beginnings for 9-year-old Eleanor Pine on Thursday, who is now officially on a path to being cancer-free by 2023.

Friends of the family lined up in their vehicles on the cul-de-sac in front of the Pines’ home to drive by their front lawn and wish Eleanor all the best. An estimated 25 to 30 cars, trucks, and even an engine from Klamath County Fire District No. 1 made an appearance. Many stopped to shower Eleanor with flowers, gifts, or simply to honk in support for her and her family.

Eleanor said she knew people would be driving by, but the soon-to-be fourth-grader admitted she didn’t know how many would show up. It was a reunion of sorts for her family and their friends, too, especially since Eleanor hasn’t seen many of her friends since her birthday in mid March.

Eleanor has undergone at-home treatment for Acute Lymphoblastic Leukemia since being diagnosed at Doernbecher Children’s Hospital at the age of seven. Her treatment for the last 18 months has involved chemotherapy at-home medication.

“She had her last IV treatment on May 6,” Michelle said.

“I’m just so grateful to have gotten through this with relatively little side effects.

“When you’re nine years old, two years is a pretty big portion of your life.”

Now that Eleanor is done with treatment, she’s ready to focus on the important things — being a kid who’s fond of elephants and unicorns, playing dolls with her little sister, hanging out with her friends, and eating homemade ramen made by her Mom, Michelle.

“It feels great,” Eleanor said, of being finished with treatment.

How did she make it through 799 days of chemo treatment?

“One foot in front of the other,” Eleanor said definitively.

“That’s what my mom tells me every time I’m at the hospital.”

Thursday was a welcome reprieve for a family that has endured much during the last two years since Eleanor’s diagnosis.

In early 2018, Michelle noticed Eleanor having abnormal symptoms that caused the then first-grader to miss school and other activities she normally enjoyed.

“I knew that something was not right,” Michelle said. “So we requested labs … and they were way off.”

It was found Eleanor was missing parts of the blood cells that fight infection. On a day her fever spiked extremely high, she was flown to Doernbecher Children’s Hospital for bone marrow analysis, where after two days they diagnosed her with Acute Lymphoblastic Leukemia.

Eleanor’s brother, Clem, 13, and sister, Sylvia, 7, stayed with their grandparents in Portland for a month while Eleanor received subsequent treatment.

After one steroid treatment, Sandy said Sylvia hid behind her and said, “Nana, who is that?”

She spent the first month of her diagnosis at Doernbecher Children’s Hospital in Portland but was also treated in Medford.

There were bright spots along the way, and Sandy said Eleanor’s sense of humor and good attitude provided relief for the family through the process. Sandy also said the experience has made the young girl stronger.

Eleanor and her family took a trip to Orlando to visit Disney World with Make-A-Wish Foundation. She was also a recipient of the Sparrow Program at Henley Elementary and Henley High School as well as Lost River Junior/Senior High School. The program is a charity that promotes youth helping youth through medical challenges.

“They all adopted her all at once,” Michelle said.

But all of that was in the rear-view mirror as friends who’ve become like family to her drove by to celebrate with Eleanor.

Her pediatric oncologist from Medford, Dr. Ellen Plummer, rolled by the house with her three little children in tow, on their way to Bend.

“You drove all the way over here?” Eleanor’s father Evan said, walking jubilantly over to her car.

For Plummer, it only made sense to see Eleanor through her last day of treatment, after being her oncologist for the last two years.

“She’s always been a treat to take care of,” Plummer said. “She’s so very brave, even doing things she obviously does not want to do, and just has a maturity above her age.”

Plummer said the Pines are “the kindest family” and praised them for helping other families in Klamath Falls undergoing childhood cancers.

“They’ve always been looking at ways they can give back to others in a similar situation.

“I’m so happy for her,” Plummer added.

Ron and Fabian Baker, who are best friends with Eleanor’s grandparents, were among others who waited in line to greet Eleanor. The Bakers have known Eleanor’s father, Evan Pine, since he was a baby, and Evan grew up with the Bakers’ children.

Eleanor’s babysitter was also in line, as was one of her teachers.

Evan said the support the family has had in Klamath Falls has made all of the difference over the years, and during the last two especially.

Evan grew up in Klamath Falls and he and Michelle lived in Portland for 10 years before moving back to his hometown.

Michelle said the community rallied around the family with a GoFundMe page raising about $18,000 for hospital expenses at the start of Eleanor’s diagnosis.

“The community that is here that gets behind people is amazing,” Evan said. “That has been an eye-opening experience for me.”

The family posed all together in front of the Pines’ family home for a photograph, with Eleanor in the front.

On the count of three for the photo, the family yelled out, “Team Eleanor!”

The mantra could also be seen on the T-shirts worn by many of the family, and generally describes the family’s approach to battling cancer.

“I’m thrilled that we’re done with this stretch of it — it’s a big relief not to do anymore (treatment),” Evan said. “She’ll just start getting better from here on out.

“We still have a little bit of a row to hoe to be totally done,” he added.

Eleanor will be cleared of cancer in 2023, five years after she was diagnosed, when she is 12 years old. The type of cancer Eleanor has been treated for has a 97% survival rate.

“That’s when she’s considered cancer-free,” Evan said. “That will be another celebration.”

But on Thursday, it was time to focus on the moment.

“This is a huge step,” Evan said. “Chemo being done and her feeling better is going to be life-changing for the household … This is going to be something new.”