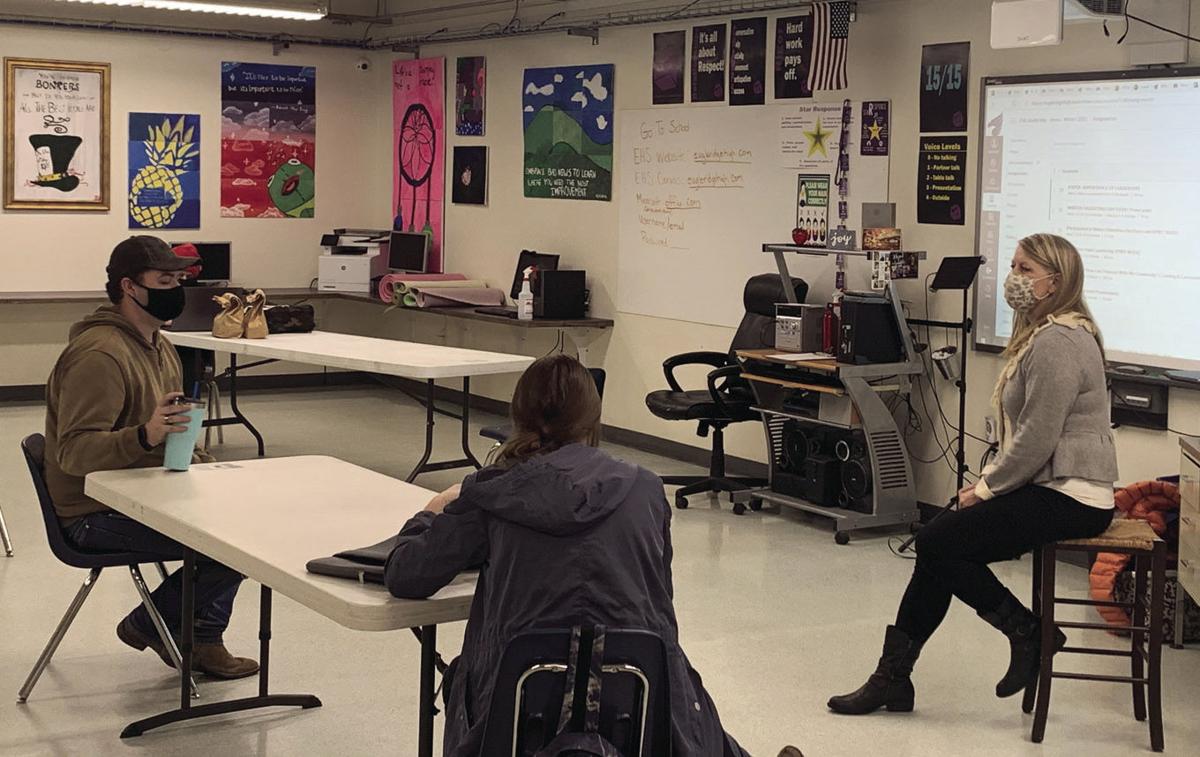 Sari Saluskin teaches English in person at Eagle Ridge High School on Tuesday for the first time since March 2020. 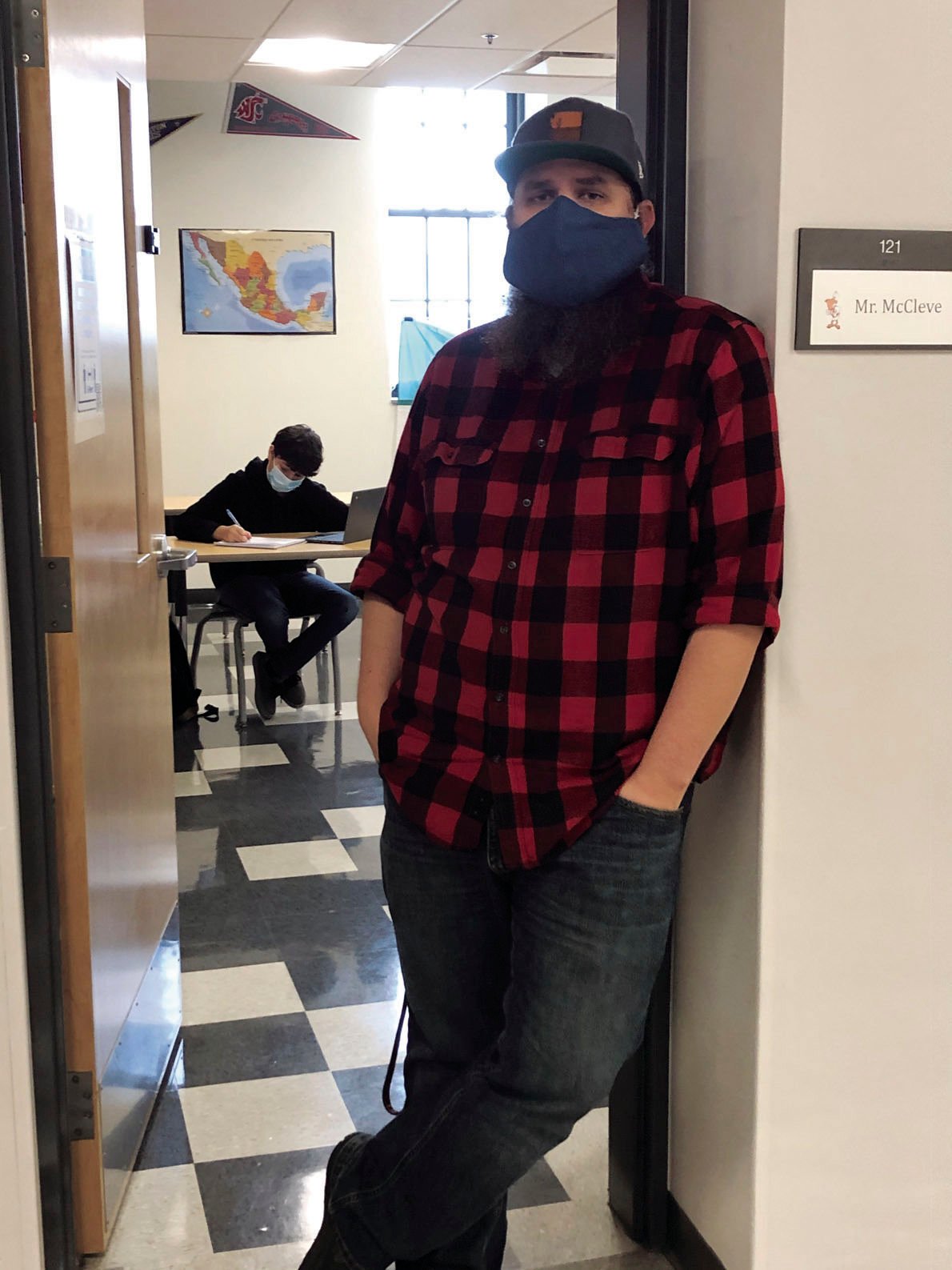 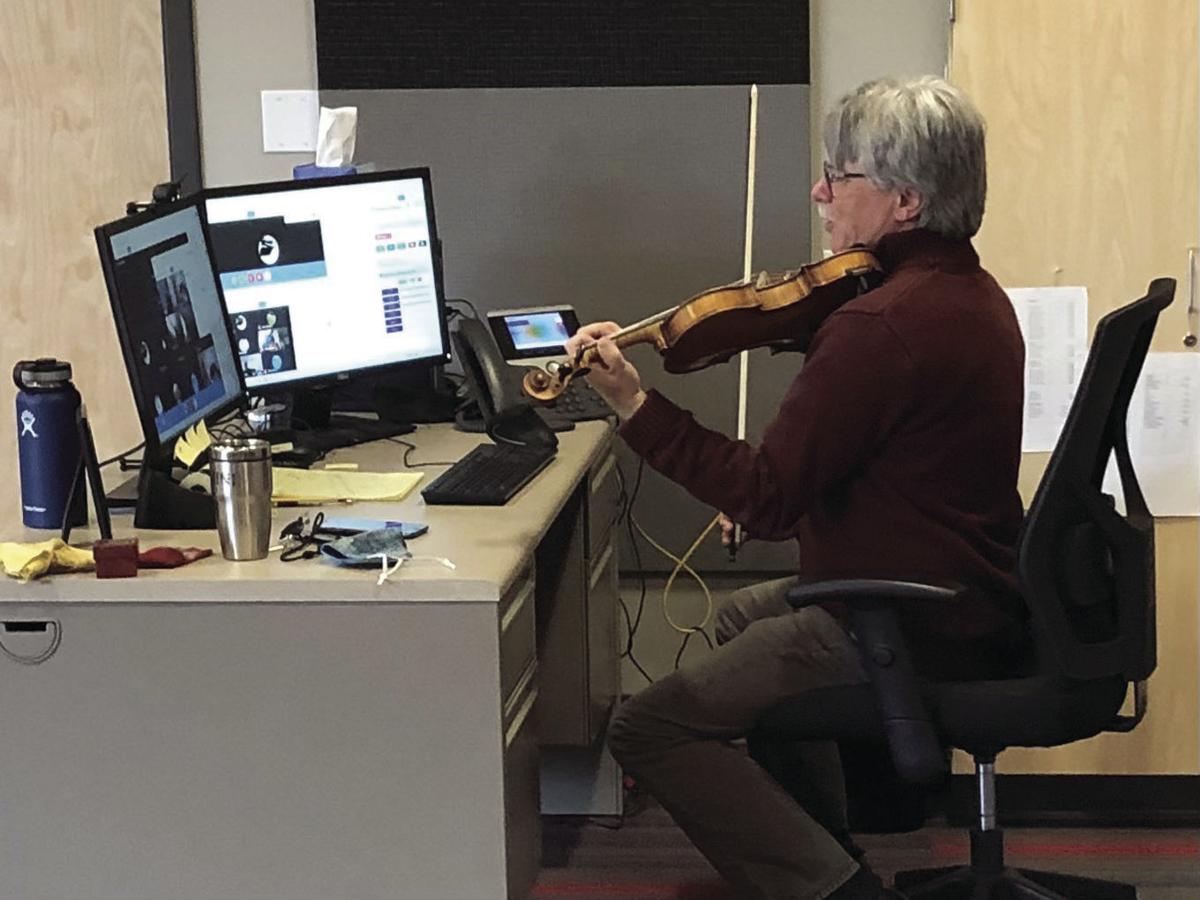 Sari Saluskin teaches English in person at Eagle Ridge High School on Tuesday for the first time since March 2020.

With a closed campus for students, Klamath Union High School welcomed all ninth through 12th grade students back to the school grounds this week for hybrid learning for the first time in 10 months.

Principal Tony Swan said students and staff are excited to transition back on campus for two days of in-person learning, in addition to distance education, and that the school is following all protocols necessary to remain a safe place for students and staff while they are on campus. The decision to open the school was part of a unanimous decision by Klamath Falls City Schools and Klamath County School District, who held a joint school board meeting last week to discuss liability concerns related to COVID-19.

“There’s a lot of support to open up so that’s what we did,” Swan said on Tuesday.

Students have a hexamester schedule, with two classes every six weeks, Swan said.

The current model could change in early February to a morning and afternoon model, five days per week, according to Swan. More will be known next week on Jan. 19, when Oregon Gov. Kate Brown and Oregon Department of Education may release more changes to school metrics.

Roughly half of the school’s 620 students are on campus for two days out of the week under the new hybrid schedule, Swan said on Tuesday. About 35 students will continue to attend courses through the school’s online platform through the end of the month, he said.

“We have not had any students coming in for hybrid learning this entire school year, so this was a new thing for us,” Swan said.

“It started off ... it was just going to be an extra week of spring break and that quickly shifted to distance learning,” he added, referencing March 13, 2020, which was the last day on campus for all students.

Klamath Union is still offering the opportunity for students to attend virtually for this term, for students that don’t feel ready or comfortable being on campus.

Elective classes such as band, orchestra and choir are also being taught through distance learning due to scheduling, Swan said.

“Those teachers have set up individual appointments with students,” Swan said.

“Live, synchronous lessons, and they have basically a one-on-one with a teacher.”

Art classes are now in-person, however, allowing students to do their artwork on campus.

“Everybody’s just had to be very, very creative in the pandemic in the way they’re doing things,” Swan said.

Swan said there have been concerns about safety in regards to opening up the campus to students, but the school is working to alleviate them.

“We know that there are high incidents of COVID occurring in Klamath County,” Swan said. “There were concerns about opening at the time when the county had very high rates ... after the holiday season.

“We have been addressing all of those (concerns) ... but it also just reiterates the importance of us following the safety protocols that we have put in place.”

Swan said protocols such as hand-washing, social distancing, and masks are all enforced with students and staff. The campus is closed to visitors and volunteers at this time as well, to mitigate spread of the virus. All staff meetings are virtual as well within the building.

Lunches are delivered to classrooms and students are not allowed off campus during school hours.

“They’re teenagers, you know ... that hasn’t changed,” Swan said. “We are practicing a lot of grace with them, and teaching, re-teaching, and trying to be as explicit as possible in what the expectations are.”

Eagle Ridge High School started hybrid learning this week, too, with 85 to 90 students enrolled in online education and roughly the same amount enrolled in in-person learning at the Klamath Falls charter school.

Excitement levels have been high for students and staff alike this week at Eagle Ridge.

“We had students at our door at 11:30 (on Monday). They could not wait to come back. You can just feel the electricity in the building. You can see the spirits of the teachers uplifted … it’s rejuvenating.

Students have the option to take their classes online in the mornings or they can actually come into the building in the afternoons, Cappel said.

Teachers have the option to teach their courses online as well, though Cappel said all have chosen to teach in-person. Cappel said the school has strict cleaning and sanitizing protocols in place and that that has helped make teachers feel safe to be on campus.

“We’re just getting used to being back in the swing of things because it’s been a long 10 months,” Cappel said. “We haven’t had the structure of a classroom so it’s just getting adjusted to teaching in person again.”

With students back in the building for the first time since March 2020, so-called “normal” routines such as lunches have also changed.

“We are working very closely with the YMCA, who are incredibly supportive with us through this entire time in providing lunches,” Cappel said. “We give the meals out to our students as they’re leaving in the afternoon. We’re here for such a limited time anyway that we want to make sure our students are getting as much hands-on instruction as possible.”

Cappel called the past year at Eagle Ridge a “new beginning,” and a “much-needed reformation of our educational system.

“I’ve seen students that struggled when they were in the building that are thriving in online learning,” Cappel said.

“I really do believe this is a new beginning. I’m very excited to see what will come from it.”