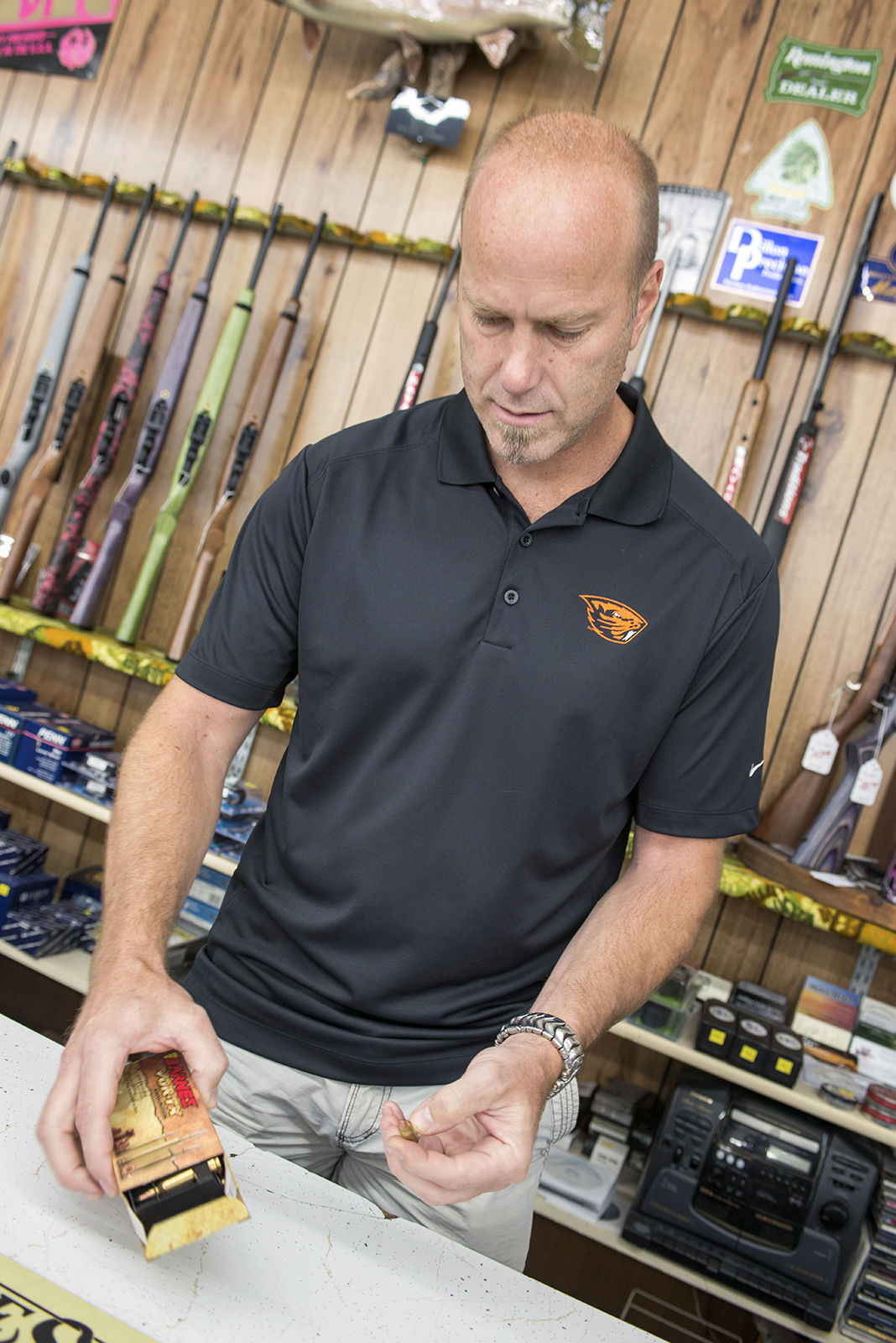 Parker’s Rod & Gun owner David Parker holding one of the non-lead options the store sells. “We as retailers, we're driven by the consumer, so there's no hold back on our end to switch over,” he said. “We're happy to do it if that is what the consumer is wanting, and we're seeing more of that… I think in general, the hunters are pretty eco-friendly for the most part.” 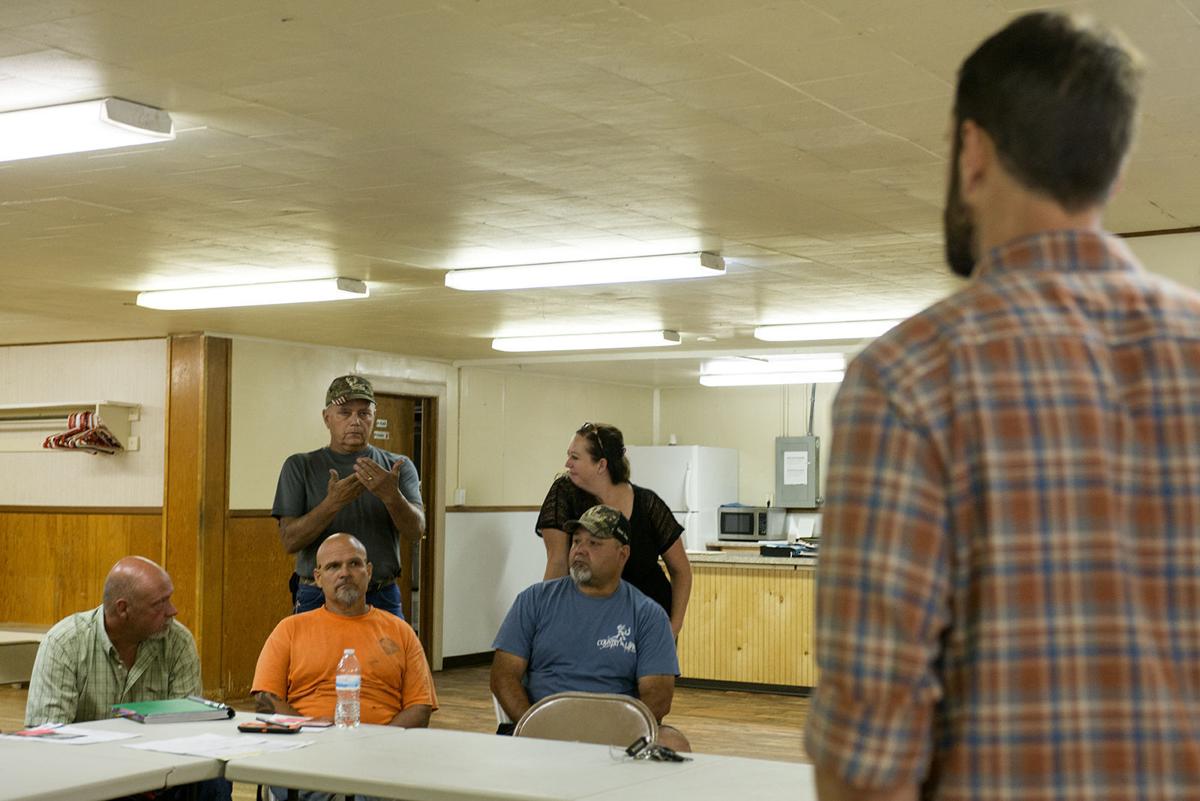 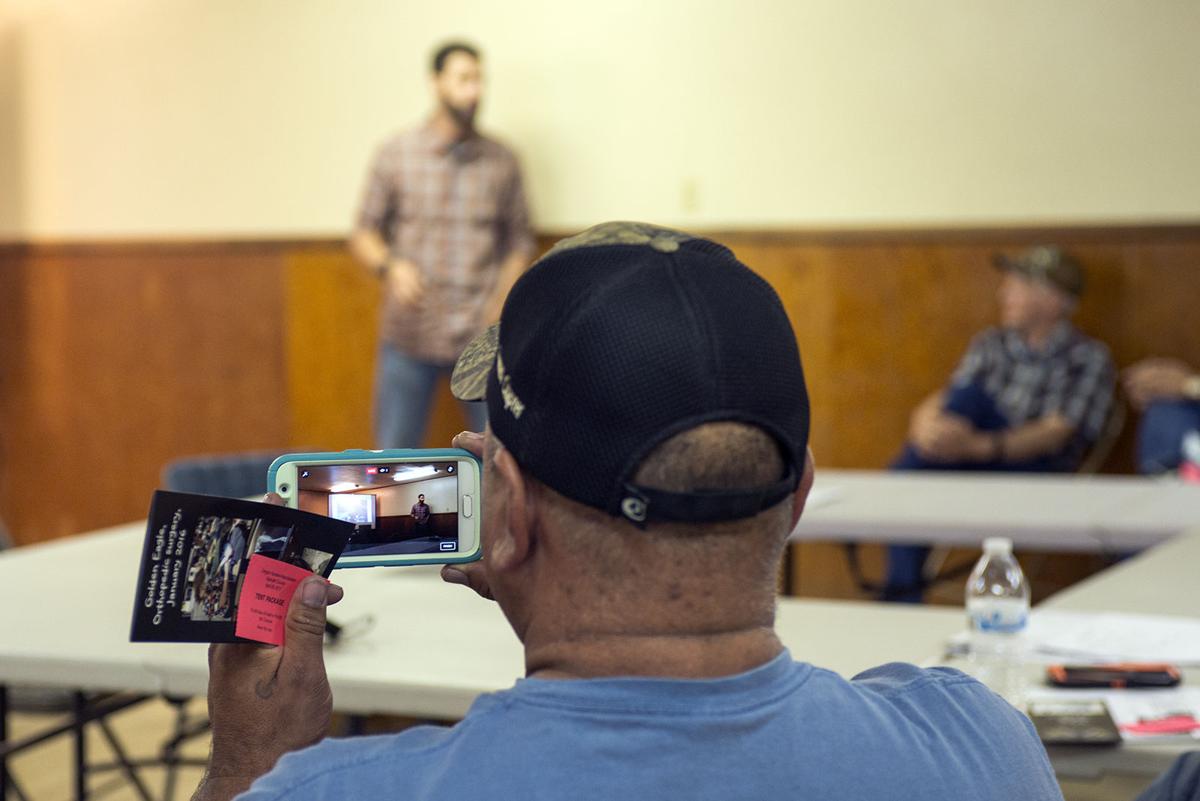 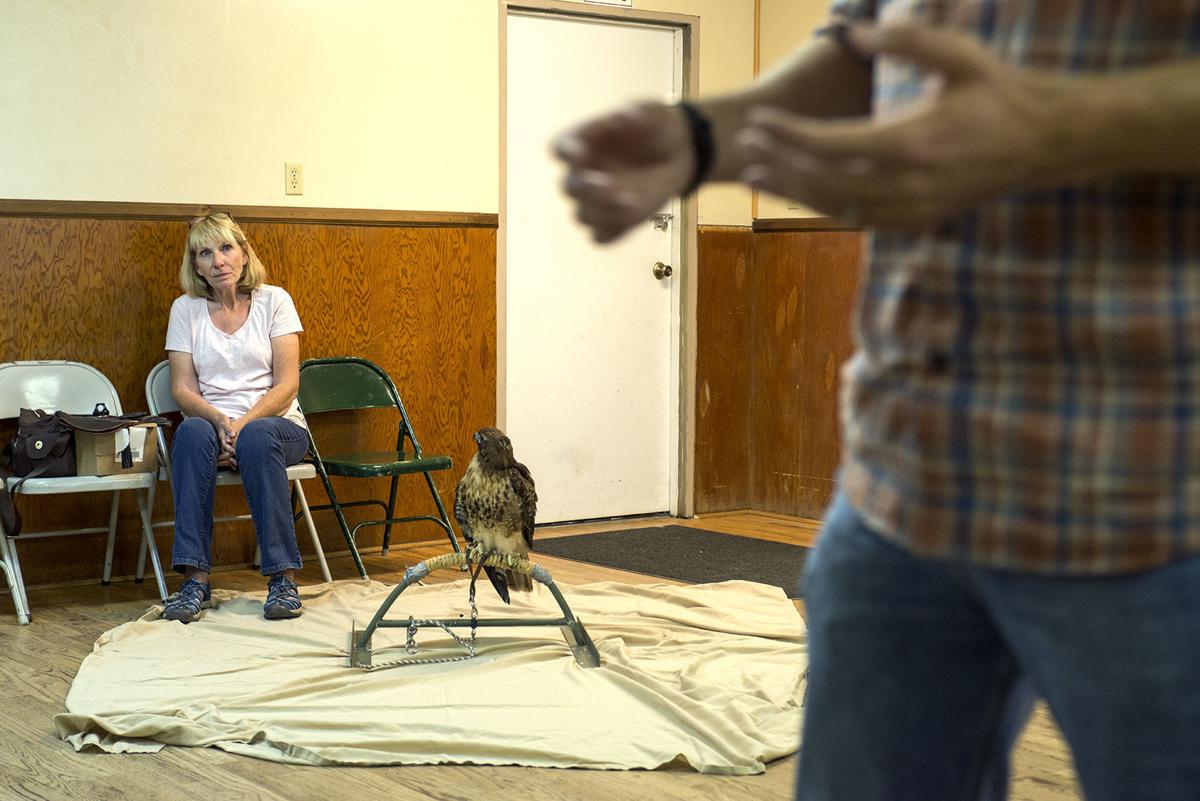 Badger Run volunteer Laura Hale with animal ambassador Little Bit. Hale said the wildlife facility is trying to fix the problem of lead poisoning before it gets out of hand. 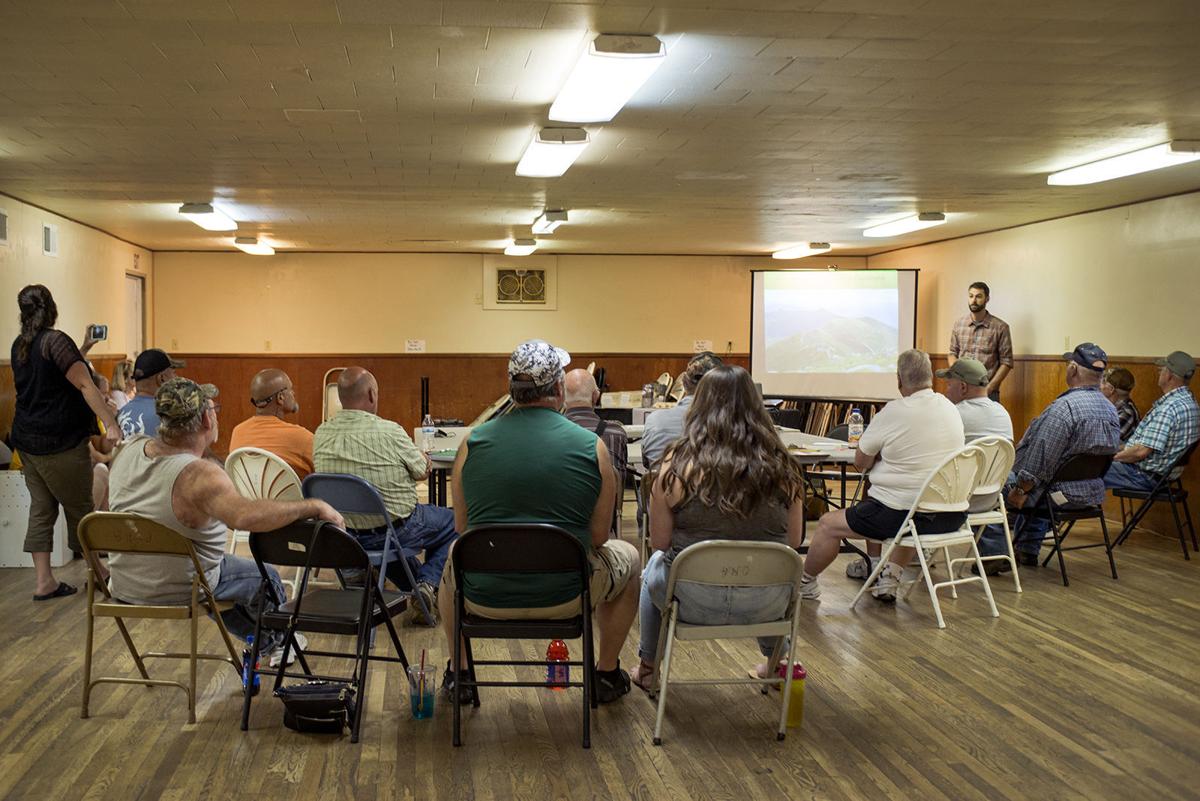 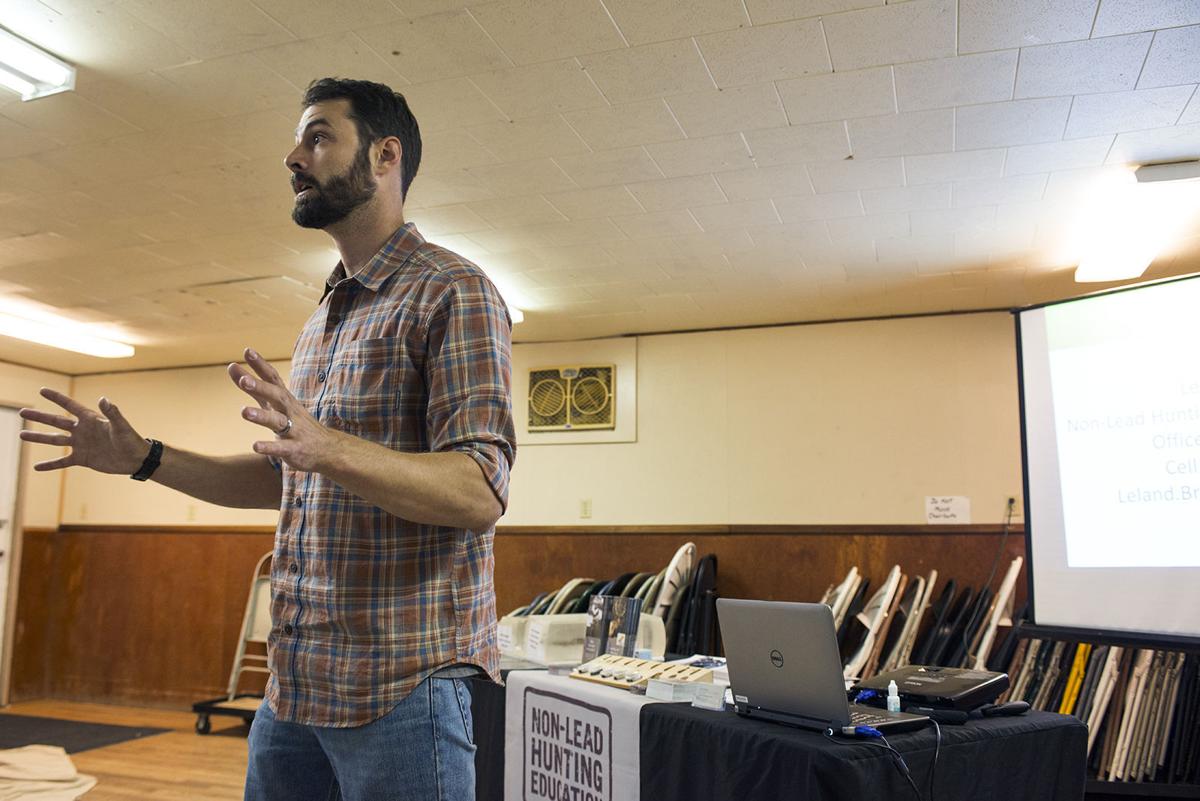 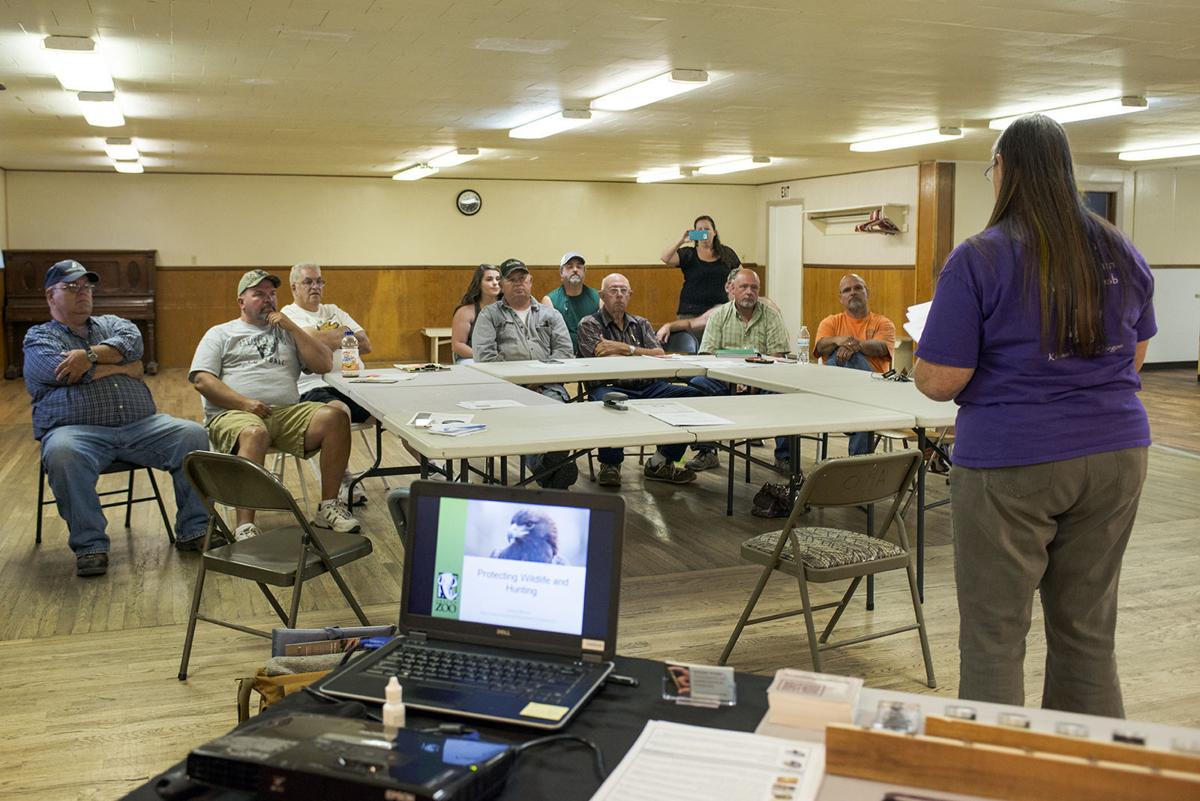 Badger Run volunteer Rose Beardsley talks to members of the Oregon Hunters Association Klamath chapter at its Aug. 10 meeting at the Shasta View Community Center. “I do know that lead poisoning, even with us humans, is possible over time,” said Beardsley. “With our wildlife, it's a more critical situation.” 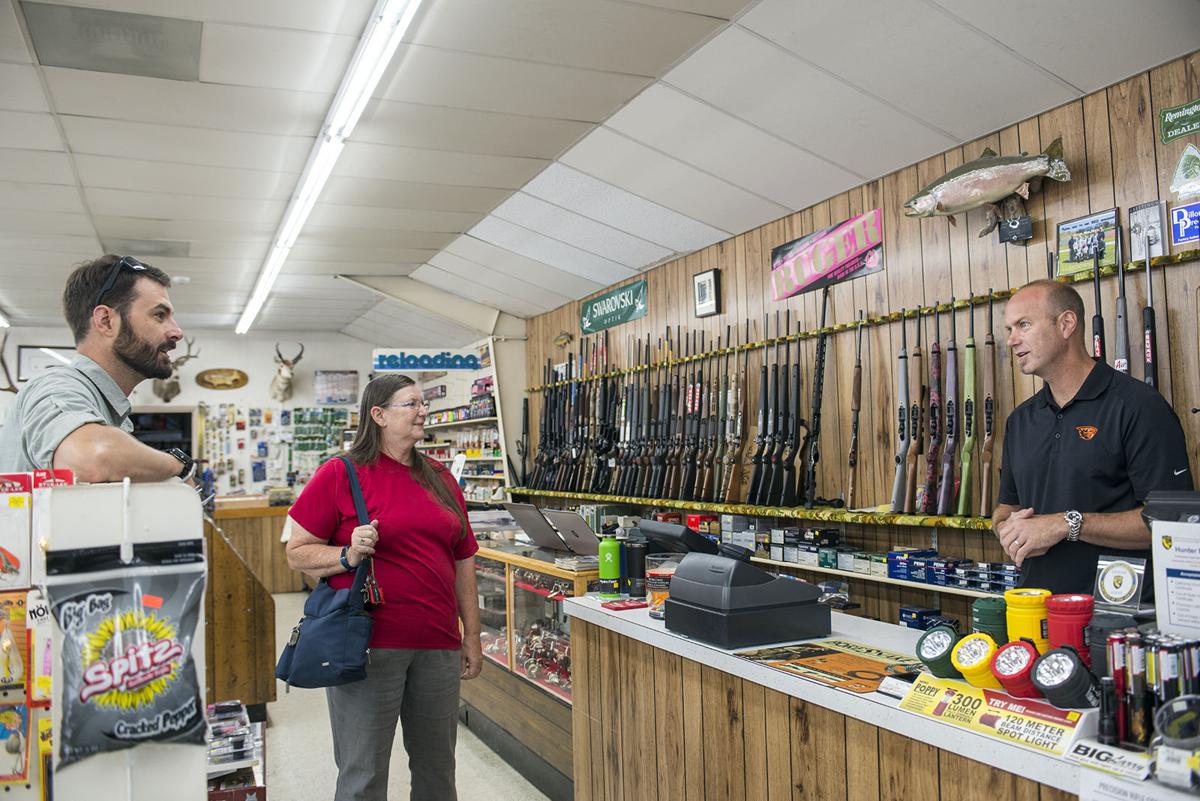 Leland Brown and Rose Beardsley talk with Parker’s Rod & Gun owner David Parker. “One of the things we want to do is that we want to increase accessibility across the state,” Brown said. “People don't just hunt in their local community. They go and do a trip up wherever, and you have to run by the local store.”

Not many topics would bring together the Oregon Zoo, Badger Run Wildlife Rehab and the Oregon Hunters Association, but on Aug. 10, representatives discussed the impact of lead bullets in the Klamath Basin, particularly on the largest population of bald eagles in the continental United States.

The experience of being on both sides of the issue is not new to Leland Brown, Oregon Zoo non-lead hunting education coordinator, who since 2015 has given more than 150 presentations on how lead poisoning can impact an ecosystem far beyond the targeted animal.

“My background is not as an education person,” said Brown, who is also a hunter. “I’m a biologist. I was shooting pigs and other invasive species and using lead for some of it until someone showed me the research that was out there. So I can never say to someone, ‘How dare you do this?’ Because I was in the exact same boat as anyone else. But once I learned about it, it’s an opportunity for me to make sure that my hunting provides as much benefit to the rest of the system as it does for me.”

Brown said that when lead bullets break skin, they often shatter into dozens, if not hundreds of fragments in extreme cases. While it is common practice for hunters to leave carcasses or internal organs behind for other animals to eat, scavengers, particularly raptors like eagles and vultures, can ingest the fragments. The negative health effects of lead on humans, which include attacks on the brain and nervous system, are worse for animals.

“So adults (animals), you can get up to a level where you’re poisoning them, and they’re sick and dying,” he said. “With young animals and developing nervous systems, you have impacts that go far beyond that.”

California has already shifted away from lead, with a complete ban going into place July 1, 2019. Brown — who became involved in the issue while working at the Institute for Wildlife Studies in California — said that prohibition is not necessarily the most effective route when it comes to changing ammunition practices.

Brown said he was “a punching bag because I was the only person that they ever had a chance to talk to about it, even though I didn’t work for the state.”

On a national level, lead bullets have become a contentious political issue. As one of his first acts, Interior Secretary Ryan Zinke overturned the Obama Administration ban on lead bullets in wildlife refuges. A nationwide ban on the use of lead shot for hunting waterfowl was instituted in 1991.

Brown prefers “education over regulation” to change the conversation in Oregon and make small improvements that have impacts “across the United States, because what happens in one place is reflected back everywhere else.”

Badger Run Wildlife Rehab volunteers Rose Beardsley and Laura Hale invited Brown to come to Klamath Falls — his first trip to the city — based on their experiences examining injured birds. While few of the animals were above their standard of 20 micrograms/deciliter for lead poisoning, many of the birds coming into the Keno facility were injured by cars and had trauma or emaciation.

“We haven’t gotten any in the levels where you get to convulsions and the seizures, the blindness, the head drooped upside down,” said Hale. "We’ve never seen that to my knowledge .... Mostly, we’re trying to fix the problem before it gets out of hand.”

There is research that eagles can be impacted with measurements as low as 2.5 micrograms/deciliter, a level for which Badger Run will now provide treatment. Although Hale said their evidence is anecdotal, impaired flight and other lead issues could be causing more birds to be hit by cars.

“It’s like flying drunk when you have lead poisoning,” said Hale.

Beardsley, who connected Brown with the Klamath chapter of the Oregon Hunters Association, said that watching her husband shoot ground squirrels, known locally as squeaks, inspired her to research lead poisoning.

“The farmer that my husband shoots for, he and his buddy shoot for, they will drop 200 squeaks a day in a field, and it will be filled with raptors before they put their guns in the case,” said Beardsley. “So you think about 200 squeaks with 40 lead fragments (each), that’s why Badger Run is in business, among other things.”

For Brown’s presentation at the Klamath County Oregon Hunters Association’s (OHA) August meeting, Hale and Beardsley brought Little Bit, a red-tailed hawk who is one of Badger Run’s ambassadors.

Rick Vieria, OHA chapter president, said that he and many hunters have been using lead bullets for years because they are a humane way to quickly and accurately kill animals. Although, he said he does not see shifting to non-lead as a huge difficulty, some local hunters are against being forced to make a change and are worried California’s ban signifies a similar regulation in Oregon’s future.

“When you talk to this group, you’re going to get very dynamic, opposing opinions,” said Vieria. “Some will say, ‘Oh not a problem. I’ll switch right now.’ Another will jump up and down, cuss every word he’s ever had and say, ‘No I’m not going to change. It’s been this way forever. Why fix it?’ It’s split.”

Brown said it’s important to focus on choice, but encourages hunters to show leadership and stewardship in protecting the future of hunting. He ended with a quote from Theodore Roosevelt: “We have taken forward steps in learning that wild beasts and birds are by right not the property merely of the people alive today, but the property of the unborn generations, whose belongings we have no right to squander.”

Following the presentation, Vieria was the first to ask when Brown would be able to demonstrate the effectiveness of non-lead ammunition to a wider group of OHA members and the Klamath Basin.

Other members, such as Rich Nelson, expressed concern about the higher cost of non-lead ammunition. Nelson, who uses a muzzleloader, said that increasing expenses are making hunting “a rich man’s game.” Although Brown said the price of copper alternatives has gone down as they continue to be developed, they often cost about a third more than the lead alternative.

Even as copper bullets increase in popularity, they can be difficult to find locally, with many only supplying a few non-lead options. Although they are widely available online, Brown said it is an issue when hunters want to support local businesses, or are traveling.

“One of the things we want to do is that we want to increase accessibility across the state,” he said. “People don’t just hunt in their local community. They go and do a trip up wherever, and you have to run by the local store.”

Before leaving Klamath Falls, he and Beardsley of Badger Run stopped by Parker’s Rod & Gun Rack to talk with owner David Parker, who said he caters both to experienced hunters who special order their ammunition and to the “weekend warriors,” “who just grab a box off of the shelf, the cheapest one, and go. We don’t see that as much here. Most of the guys are looking for good performance and accuracy.”

For these customers, Parker said, he special order supplies, which arrive next day, “faster than Amazon.” Because of the relatively small in-house inventory, he said that shifting to non-lead options would not be difficult. Given the changes in California, he said, he already recommends non-lead options to beginners.

“We as retailers, we’re driven by the consumer, so there’s no hold back on our end to switch over,” Parker said. “We’re happy to do it if that is what the consumer is wanting, and we’re seeing more of that …. I think in general, the hunters are pretty eco-friendly for the most part.”

It’s a sentiment Brown agrees with. After spending time with Klamath Falls locals, he said the positive response is “kind of what I expect from this community. Hunters are avid conservationists and if shown good, quality information, generally, they’re supportive.”

Although it will probably be around a year until Brown is able to come back and show the benefits of non-lead ammo in action at a range, he said, it’s important to remember that with conservation work, “nothing happens overnight.”

“We’re dealing with a long-term issue that’s going to take a long-term solution,” Brown said. “We’re going up against at least 100 years of tradition, so people need an opportunity to wrap their heads around it and come to the other side.”