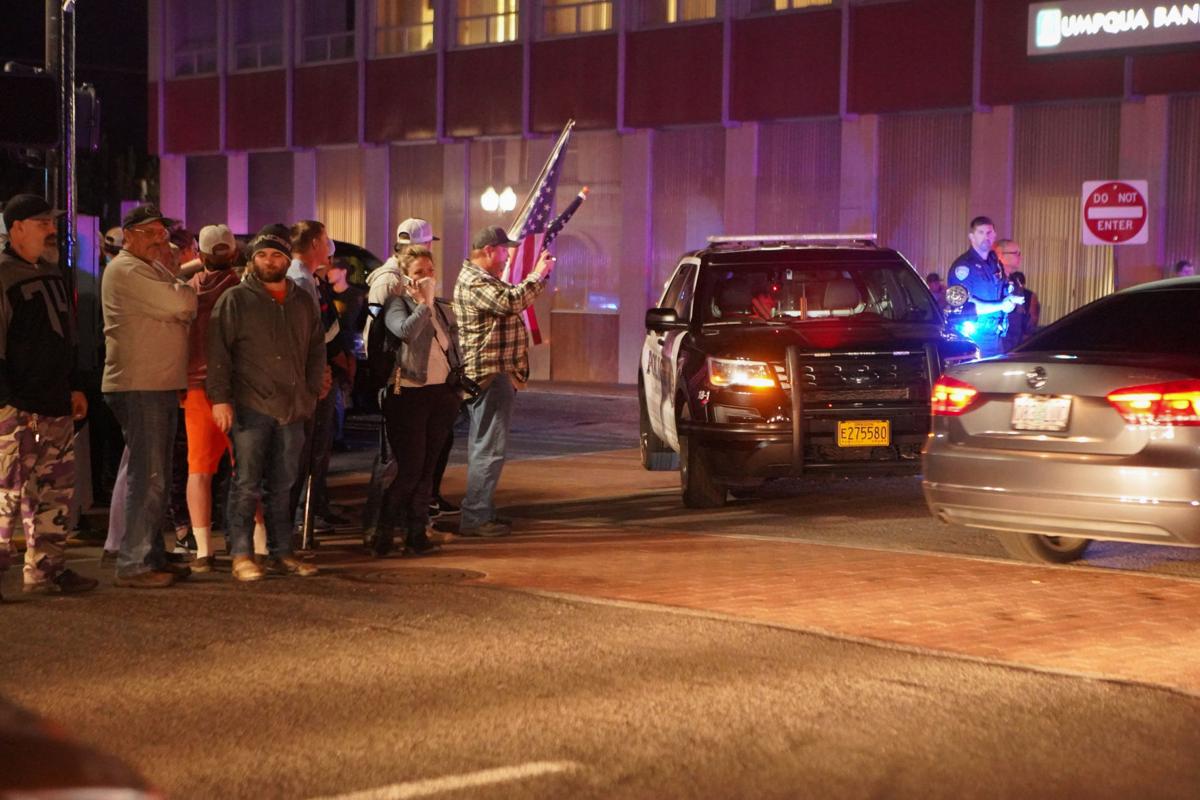 Local law enforcement had a strong presence during Sunday’s protests. 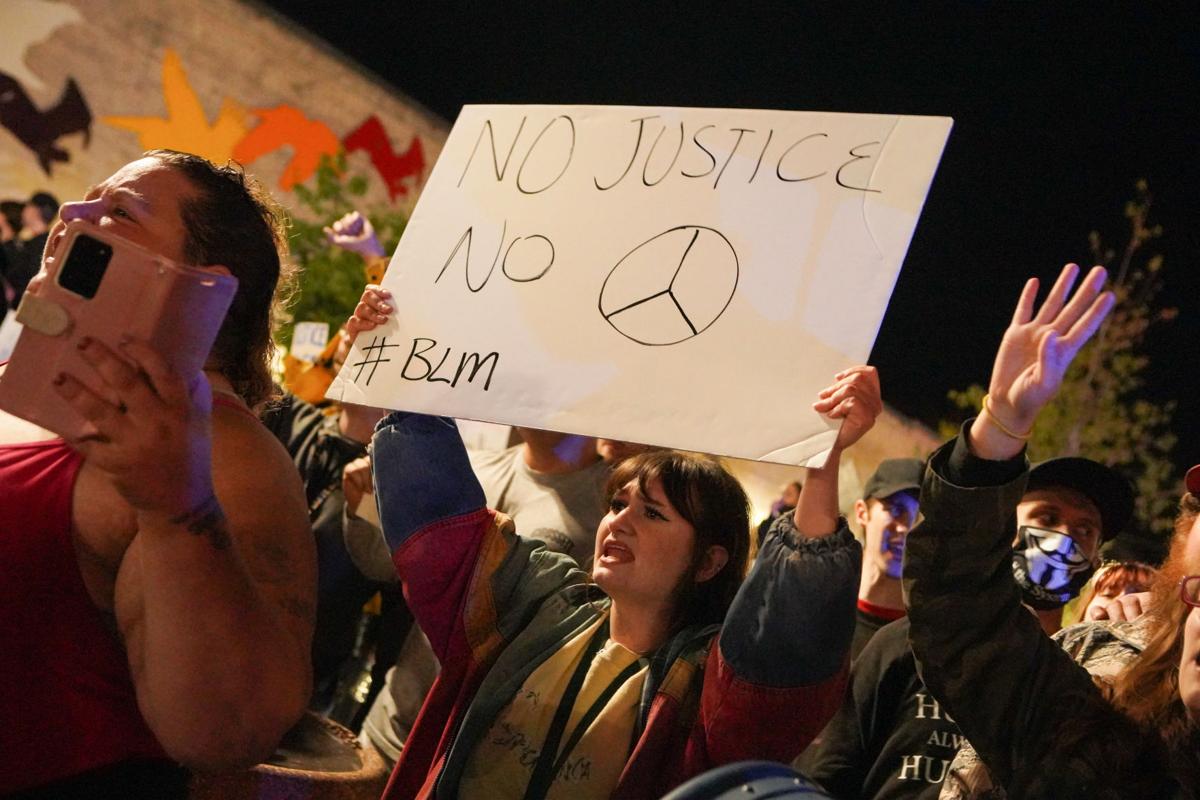 Many people came out to represent the Black Lives Matter cause Sunday night. 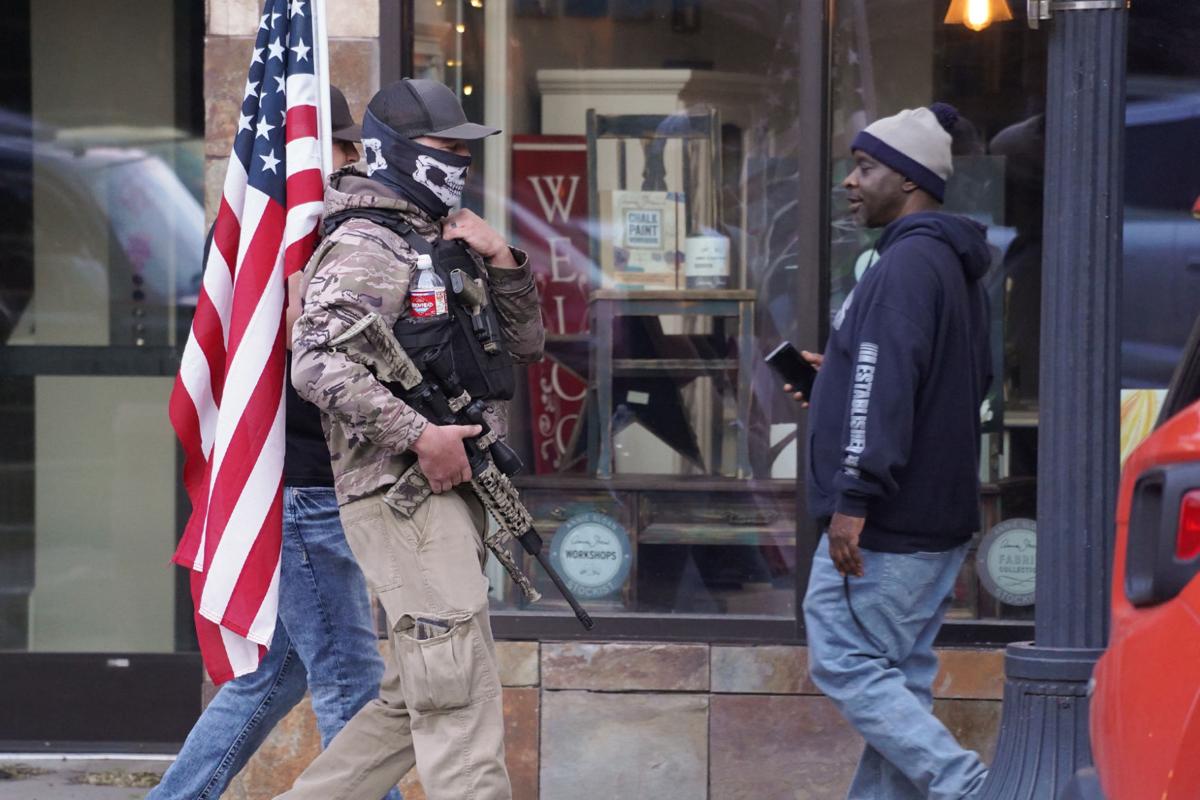 Many people who came to the protest in downtown Klamath Falls Sunday were armed with the intent to protect people and property. 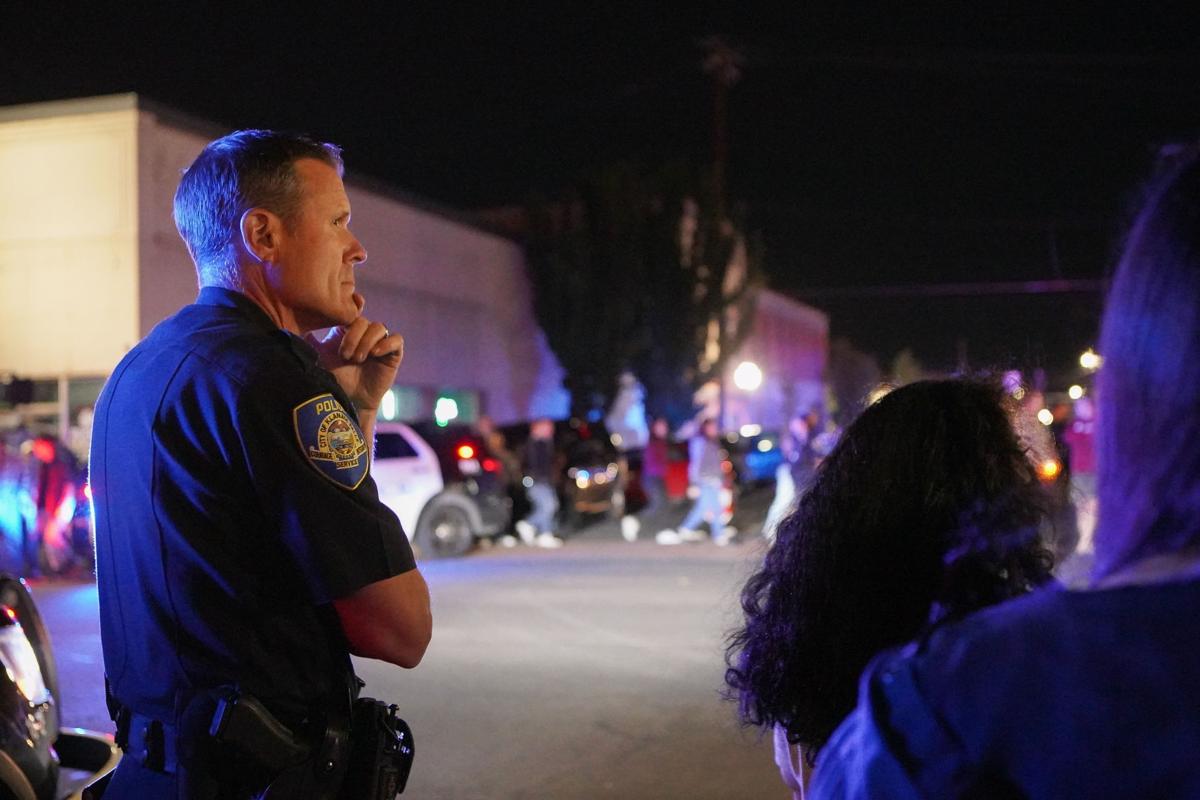 Local law enforcement had a strong presence during Sunday’s protests.

Many people came out to represent the Black Lives Matter cause Sunday night.

Many people who came to the protest in downtown Klamath Falls Sunday were armed with the intent to protect people and property.

The rumors of Antifa buses planning to come through Klamath Falls were unsubstantiated, according to Klamath Falls Police Department Capt. Ryan Brosterhous, though the Federal Bureau of Investigation was in communication with the agency about the threat that had circulated through social media prior to a protest that drew hundreds to downtown Klamath Falls on Sunday and into early Monday morning.

Many carried homemade signs in protest of the death of George Floyd by the knee of a police officer in Minneapolis and police brutality on a national scale. Others waved American flags and came out openly carrying firearms and other weapons in an effort to defend life and property from an alleged threat of Antifa.

People gathered on all four corners of the intersection of Sugarman’s Corner as well as along sections of Main Street in downtown Klamath Falls in protest on Sunday evening and into early Monday morning.

“It was tense because of the unknown,” Brosterhous said. “Anytime there’s an unknown, people are uneasy.”

The threats of buses filled with Antifa members planning to loot small towns were made on social media around the country over the weekend, according to reports from NBC News on Tuesday.

“We never had any confirmed sightings of any specific buses that were directly related to the claims of Antifa,” Brosterhous said on Tuesday.

One of the reasons Frederick Brigham III, a musician known as “Wreck the Rebel,” came down to the protest was due to the rumors of Antifa coming to the area, which he said he couldn’t believe were true.

Brigham, who lives in Klamath Falls, said he felt on Sunday evening like he was walking into a “prison camp” as he and others walked toward individuals with firearms on Sugarman’s Corner in downtown Klamath Falls. Brigham said between 200 and 250 people joined up to support the Black Lives Matter protest at the pocket park, while surrounded by hundreds of individuals on the other sides of the street.

Brosterhous believes the rumors of Antifa coming to Klamath Falls sparked individuals’ desire to openly carry firearms and weapons such as hammers, axes, and other weapons in order to protect the downtown area from the possibility of looting businesses.

“Of course you’re always going to keep an eye on a crowd like that,” Brosterhous said. “That’s why there were so many of us.”

On Sunday evening, KFPD had between 12 to 14 officers in the downtown areas. Active patrols, reserves and officers with SWAT experience were among their ranks.

“I was actually worried with that many weapons in a location at that one time just the general safety of weapons handling,” Brosterhous said.

Brosterhous said that he is aware that most who use open carry do so responsibly but was concerned about an “accidental” firing of a shot during the demonstration, which did not occur.

Doug Mauch, of Bonanza, was standing across the street from protesters supporting Black Lives Matter at a time when it was still unknown if larger groups, such as Antifa, would still be coming.

“We all care about people, we don’t want to see this many people hurt,” Mauch said. “But if they’re going to bring mayhem to our town and break up our town, we’re not going to let that happen.”

KFPD officers hung back and observed protests until individuals moved into the street at one point in the evening on Sunday.

Officers moved into the street to more closely monitor groups, at one point citing and later releasing an individual. No arrests were made in the protest by either agency. Individuals were also stopped on Main Street for “speed-racing” and “careless driving,” some of whom also left a trail of black smoke in the faces of Black Lives Matter protesters.

“We ended up citing and releasing one person for disorderly conduct,” Brosterhous said.

“We detained several for mostly intoxication,” he added.

“With COVID and jail restrictions, those people were released to sober parties.”

Protesters voluntarily started to leave the area between 1 and 1:30 a.m. on Monday, Brosterhous said, while police stayed to keep an eye on the scene until between 2 and 2:30 a.m.

“Our stance would be definitively against any police brutality,” Brosterhous said.

“There needs to be oversight and reform and professionalism within police agencies.

“Although on opposing sides of the street, they were all for the same thing,” Brosterhous added. “Everybody loved Klamath Falls. Nobody wanted to see anything bad happen to it.”

Brosterhous said once the message was conveyed to protesters with the Black Lives Matter group that everyone felt the same about supporting the community, tensions started to lower.

“Everybody felt the same way about the George Floyd incident … we made huge strides in understanding both of each other’s purpose for being there,” Brosterhous said.

Brigham said he received hugs and handshakes from individuals who had previously stood on the opposite side of the street. He also praised law enforcement for being friendly and willing to answer protesters’ questions.

“They were out there smiling and conversing with us,” Brigham said.

Brosterhous acknowledged that the majority of the members of the Black Lives Matter protest were from Klamath County, or were visiting and staying with friends or relatives in the county.

“There was never the feel of a large contingent of a lot of out-of-town folks,” Brosterhous said.

He said by the end of the protest, groups of individuals who were on either sides of the street had begun to talk with one another.

“I left with a pretty good feeling about what had occurred given the possibility of what could occur,” Brosterhous said.

Brosterhous encouraged individuals who received verbal or physical threats, as well as any acts of violence to report it to KFPD.

Klamath County Sheriff’s Office also had nine deputies in the downtown area, many of whom helped secure county buildings during the protests.

Klamath County Sheriff Chris Kaber said the protest included “many of our friends and neighbors, as well as out of town ‘guests’, came out to express various points of view and exercise the freedoms that make our country the greatest in the world. While there were times (Sunday) when words got heated and tensions rose there was largely peaceful expression in Klamath Falls. I could not be more proud of our citizens and our brave law enforcement officers who helped keep the peace last night.”