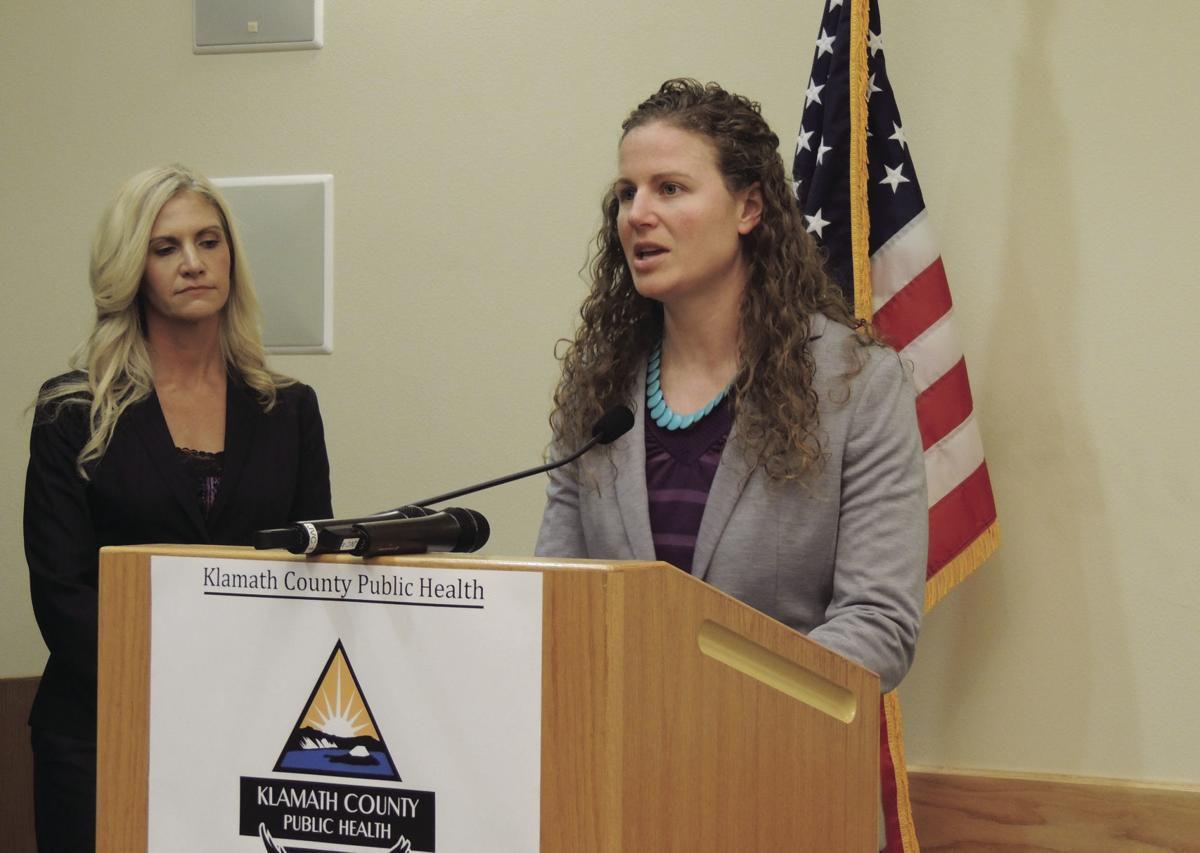 Total confirmed cases of COVID-19 have risen from five to 12 as of Thursday, including two Oregon Tech employees — one in Klamath Falls and one at the Portland metro campus, as announced by Klamath County Public Health.

”The continued safety and well-being of the installation is our top priority. We are working with our base medical staff and off-base health care agencies to ensure we mitigate the effects of COVID-19 using established Centers for Disease Control and Prevention and Defense Department guidelines,” Shirar said in a written statement. “173rd Medical Group public health officials are actively tracing the member’s recent movements and contacts in conjunction with local health authorities. Anyone considered to have been exposed to increased risk will be contacted directly.”

Klamath County is experiencing what’s called community spread, said Valeree Lane, public information officer for Klamath County Public Health, which is exactly the reason individuals are being asked to stay at home and practice social distancing. She advised that the new numbers may not be fully reflected in Oregon Health Authority’s overall numbers for Thursday but that they are accurate nonetheless as of press time.

“This is what we know and we’ve just made it our intention and policy that we’re going to get information out to the community as soon as we know it,” Lane said.

The ages of individuals with the novel coronavirus are between 20 and 69, according to a KPH news release. Lane said the agency announced the ages because cases reached the level of 10 or more, and it’s easier to protect individuals’ anonymity.

One of the two cases confirmed at both Oregon Tech campuses in the state of Oregon flew on Alaska Airlines Flight 583 from Santa Ana to Portland and Alaska Airlines Flight 2059 from Portland to Medford on March 21, according to a public health news release. The flights have been identified by KPH as potential exposure time frames.

Public Health officials determined this through contact tracing and investigating the whereabouts of individuals with confirmed cases. Officials from KPH are working with Jackson County Public Health to ensure the entire region is informed about exposure from Flights 583 and 2059.

Anyone associated with these flights who develops symptoms of COVID-19 – cough, trouble breathing, and fever – should contact KPH.

Oregon Tech President Nagi Naganathan sent a letter out to students, faculty, and staff about the Portland case on Wednesday, and a second notice about the Klamath Falls case on Thursday.

“Because of social distancing measures already in place and non-essential employees working from home, the Klamath Falls employee has not been on campus since March 9, and is quarantined at home and doing well,” Naganathan wrote in the letter obtained by H&N. “The university is working with Klamath County public health officials to assist the county in its standard case investigation processes. Klamath County will lead the followup on the process. Although the identity of the patient will remain undisclosed to the public to protect their privacy, Oregon Tech officials will be cooperating with the Public Health investigation to expedite notification to those who may have been exposed.”

Naganathan advised any individuals who were directly contacted by public health officials about their proximity to the individuals with confirmed cases that that doesn’t necessarily mean they have contracted coronavirus. If they have been near the person with the virus in the last two weeks, they could be at risk for developing symptoms. He encouraged students contacted in this way by public health to call the Integrated Student Health Center (ISHC) at 541-885-1800 as soon as possible.

Lane said most people will not have symptoms of COVID-19 or they will only experience minor symptoms. Those individuals can carry the virus to infect people who are at a greater risk, such as the elderly and those with underlying health conditions, according to the KPH release.

When asked if individuals should be wearing masks while outside their homes, Lane said it should be seen at this time as a best practice, but not a required guideline at this time from CDC.

“We’re expecting the CDC to issue that guidance so that will be our guidance when the CDC announces it,” Lane said.

“If people are able to cover up their mouths … that’s a good thing to do,” she added.

Lane advised Klamath County residents to follow mandates given by Oregon Gov. Kate Brown. She also explained how one confirmed case can impact the entire community.

“If you’re having symptoms, be careful how you’re engaging with other people,” Lane said.

Based on laboratory estimates from a study by University of Massachusetts Amherst, Lane said if one person is infected with COVID-19 and doesn’t use social distancing measures, in five days, they will have infected two and a half people.

On the other hand, with social distancing, the curve is flattened, according to the study.

“If we were to reduce physical exposure by 50%, that one person in five days reaches 1.25 people and 30 days, that’s 15 people,” Lane said. “And according to the university’s model, if they reduce physical exposure by 75%, by the fifth day, that’s only .625 people. And by day 30, it’s 2.5 people. So that’s the power of keeping distance and making sure that you’re washing your hands and making sure that you’re disinfecting the surfaces that you touch.”

Lane also shared tips on safe grocery shopping when it’s needed, such as ensuring a six-foot radius around you as much as possible.

“If you’re engaging in waiting in line to go through the check out, if you’re breaking that social distance, you have put yourself and that other person at harm because the majority of people are not going to have any symptoms,” Lane said. “We’re going to get through this and seem healthy and potentially have passed it on to someone else.”

Lane emphasized once individuals come home, they should immediately wash their hands.

Washing produce bought at the store is also a best practice, Lane said.

Sanitizing cellphones, glasses, and debit and credit cards is also encouraged, as well as any other high touch surface area in your home.

“Think about the things you have around you,” she said.

“It’s an opportunity for us to just practice good hygiene and ensure that again, we may not have any symptoms but we may be sharing things with others that we didn’t intend to.

“It’s a situation where we all get to be empowered to make a difference,” she added.

“Being apathetic could result in someone becoming seriously ill.”

For more information about COVID-19 as it relates to Oregon Tech, go online for updates at www.oit.edu/coronavirus, or contact Dean of Students Erin Foley at erin.foley@oit.edu.

For more information and updates from Klamath County Public Health, go online at www.klamathcounty.org/378/Public-Health or call the office at 541-882-8846.

Oregon Tech has also announced it will not host an in-person commencement ceremony in June, and is considering other alternatives, according to Oregon Tech officials. The university is considering holding a virtual ceremony or deferring the ceremony to a later date. A survey has been distributed to graduating seniors and a decision is set to be announced as soon as Friday.