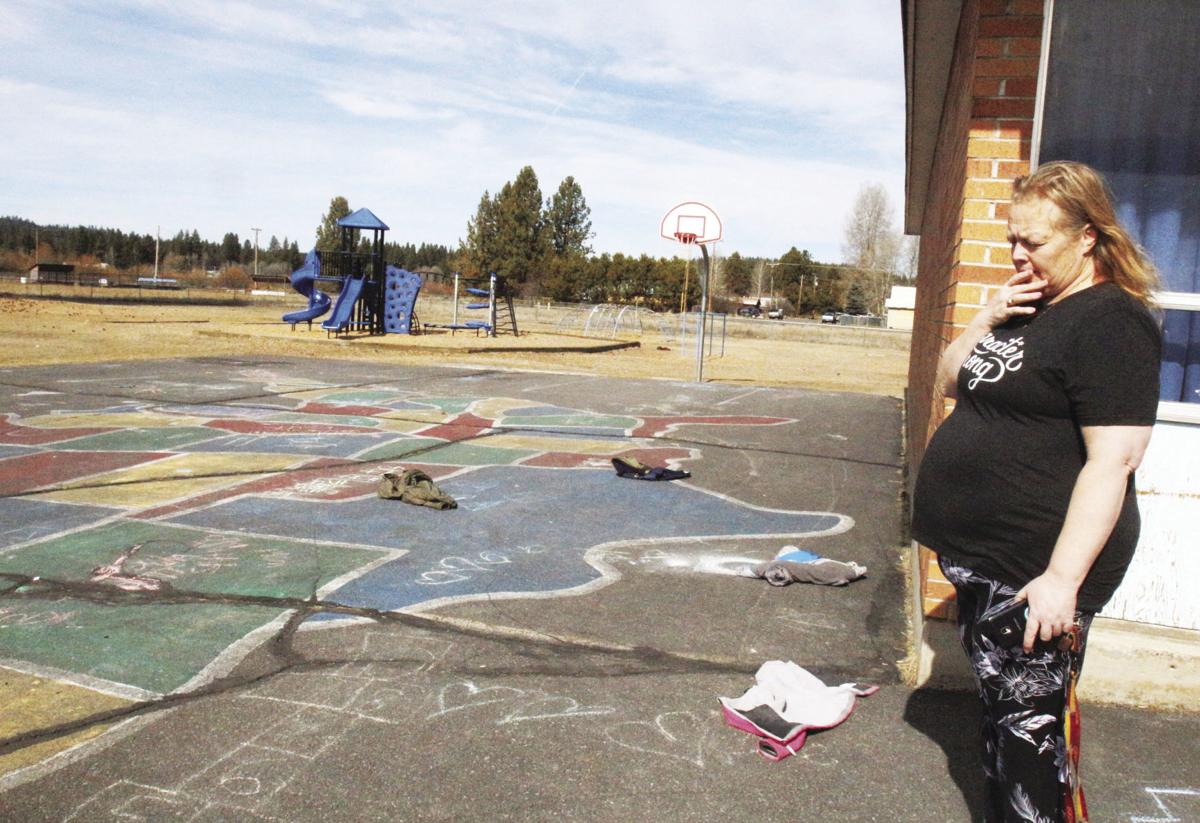 Jody Montoya, a playground and library aide at Chiloquin Elementary, toured H&N staff around the playground facilities at the school on Friday afternoon. 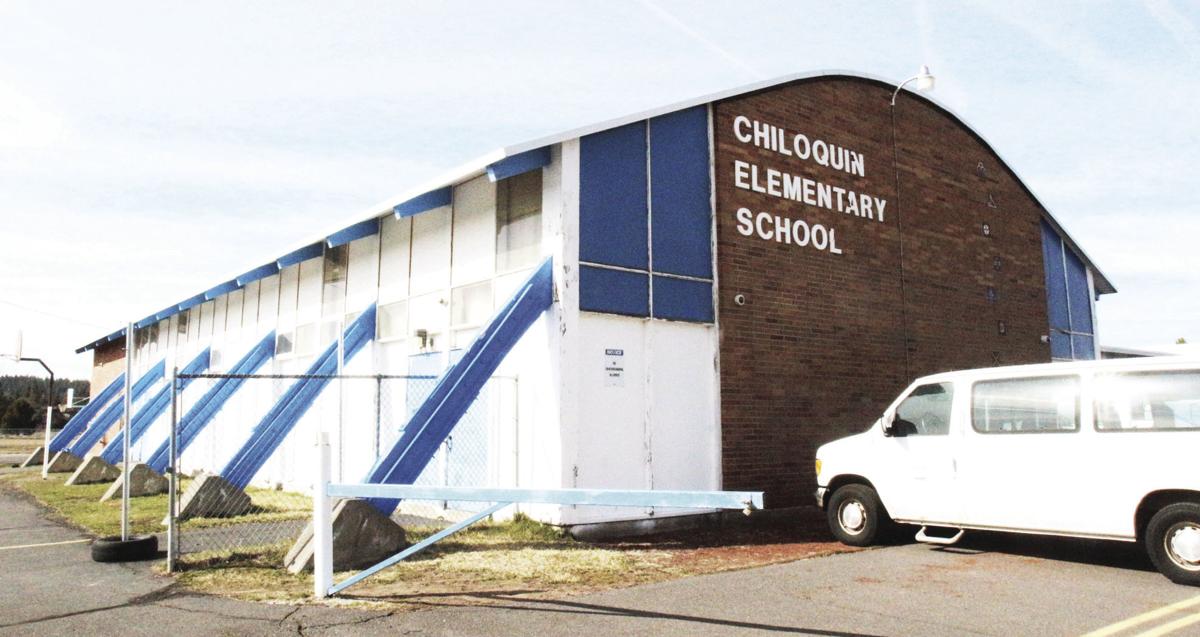 A multiphase project to create a ‘green schoolyard’ is being proposed by multiple organizations in Chiloquin for Chiloquin Elementary.

Jody Montoya, a playground and library aide at Chiloquin Elementary, toured H&N staff around the playground facilities at the school on Friday afternoon.

A multiphase project to create a ‘green schoolyard’ is being proposed by multiple organizations in Chiloquin for Chiloquin Elementary.

CHILOQUIN – Kindergartners in Rachel Belanfant’s class rushed outside to play on the playground Friday afternoon – some headed toward the swings, others to the slides, and a few to navigate the monkey bars.

Belanfant took a moment to teach a Kindergartner how to pump her legs so she could swing by herself.

She checked on students who were playing on an aging stagecoach structure beloved by many on the school’s playground.

For Belanfant, the school has been a part of her family for decades and will be for those to come. Her mother attended the school and her daughter will most likely attend there, too.

“This is the place that I’ll teach at forever, until I retire,” she said. “This is the best community.

“The community support is really good,” she added. “A lot of the families live in poverty, but they’ll give their time.”

Belanfant said since there are not always enough substitutes to supervise students, causing some of the intermediate students to come to the primary playground. The opportunities for them here are limited.

Several local organizations are partnering together on a project proposal that if approved by Klamath County School District’s Board of Directors, could enhance both primary and intermediate play areas, and create a space at the elementary school for the whole community to enjoy.

The project proposal is called a Green Schoolyard – estimated to break ground at Chiloquin Elementary sometime in 2021, pending approval by the Klamath County School District’s board of directors.

The school board heard a presentation at their Thursday, Feb. 20 school board meeting about the project proposal, which is still in the preliminary planning stages. The outcome in addition to an enhanced playground area for primary and older grade levels could also include a greenhouse, walking path, and other amenities that could be used by students and others within the community.

Art Ochoa, community organizer for the project proposal, emphasized that the project is anticipated to be funded largely through grants, with the intent is to incur zero or minimal cost to the school district.

“Truly that’s what we’re looking at it being is a community project,” Ochoa said.

Ochoa, who retired as principal of Bonanza Junior/Senior High School in June 2019, has deep roots in Chiloquin. Born and raised in the community, he also has family members there and a desire to give back.

He’s looking forward to hearing more from the community to see what Chiloquin residents, especially youth, would like to see included in the project.

“Some of it would include the traditional types of playground equipment,” Ochoa said.

“There are a lot of options but I think the core of the overall final plan is going to come from students, staff, and community members as to their input in saying, ‘Yeah, this is what we’d really like to see that would benefit our kids and families.”

“Whatever we do is for the kids – it really is,” Ochoa added.

Rita Hepper, principal at Chiloquin Elementary, is also excited about how the project could enhance the educational and physical activities for students at recess and positively impact the Chiloquin community.

Three Chiloquin Elementary students spoke about the need for more activities during the Feb. 20 school board meeting.

“It’s not just about providing a play structure,” Hepper said. “It’s about really looking at the grounds and saying, ‘How can we use these for educational purposes as a whole.’

Hepper admits the equipment the school has is limited and sees a wide range of benefits to the school and local community with the project as proposed.

On the primary side of the playground, the elementary school has one play structure, some basketball hoops, and swings. The playground also has a visibly aged but beloved Stagecoach structure.

“Our kids don’t have a whole lot to do at recess,” Hepper said.

On the side of the school used by students in intermediate grades, the school has basketball hoops and swings.

“So kids, they’re not encouraged to really be physically active because there’s not much to do for them during recess time,” Hepper said.

As a playground aide at the school, Jody Montoya sees this scenario play out everyday. Montoya said while there are six swings, there’s generally 40 to 50 children wanting to play.

“Especially for Kindergarten through first grade, there’s not enough for them to be swinging on,” Montoya said on Friday, looking out over the playground.

“Last year, I had to put a time limit on it,” she added, where every five minutes, students would have to take turns.

Montoya went to Chiloquin Elementary as a child in the 1970s, and her own children attended the school as well. She started working for the elementary school in 2004.

“Anything that’s going to help our kids is going to be the best,” Montoya said.

While the project is pending approval by KCSD, school board members seemed pleased with the idea during the presentation to school board on Thursday, Feb. 20.

“This could start a whole bunch of things going right for Chiloquin,” said John Rademacher, member of the Klamath County School District’s board of directors, following a presentation to the board on Feb. 18.

Hepper said if the project moves ahead, the next phase would be planning the project, and hiring engineers and landscapers to help out.

“Having something like that would make the kids very proud of their school,” Hepper said. “It’s something they could show off.

“It’s really exciting,” Hepper added. “Right now, we just have to wait and see if the board approves the project.”