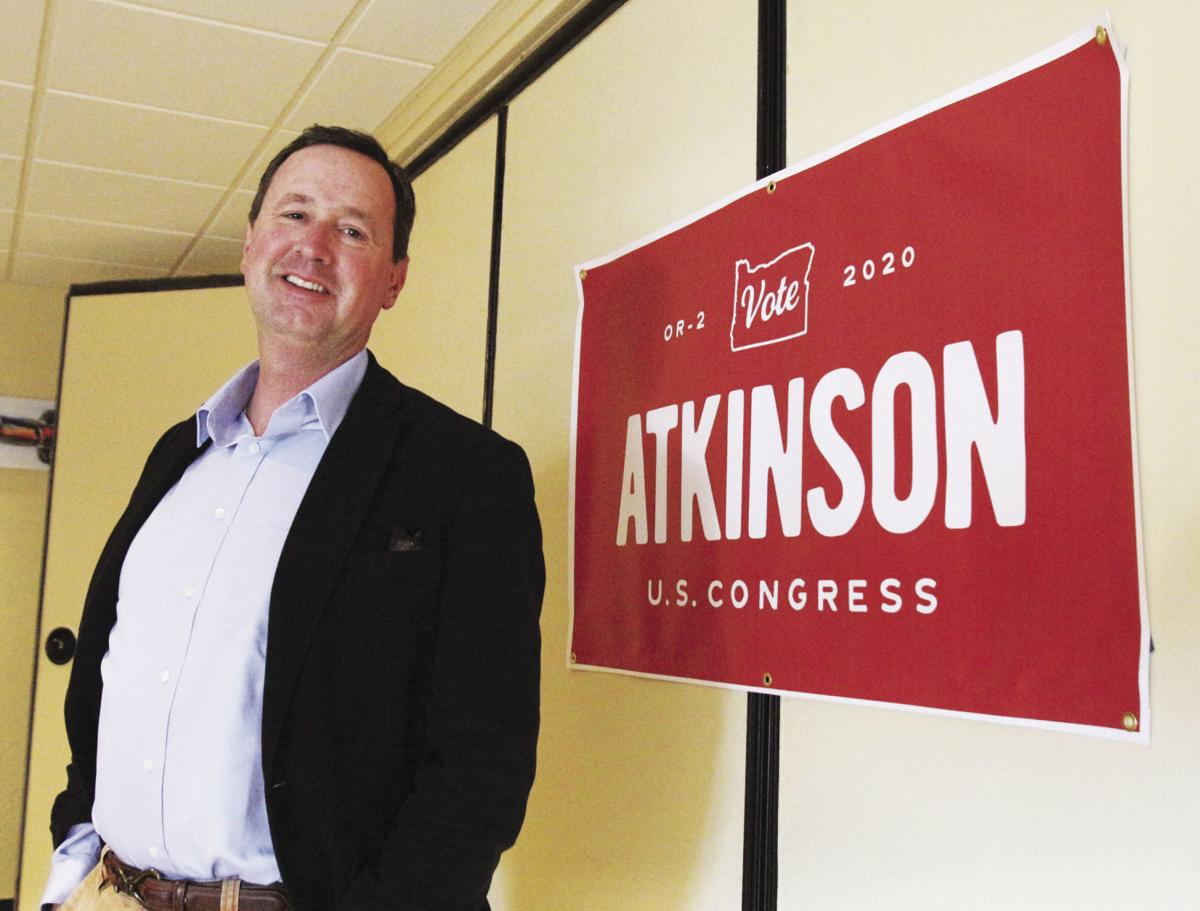 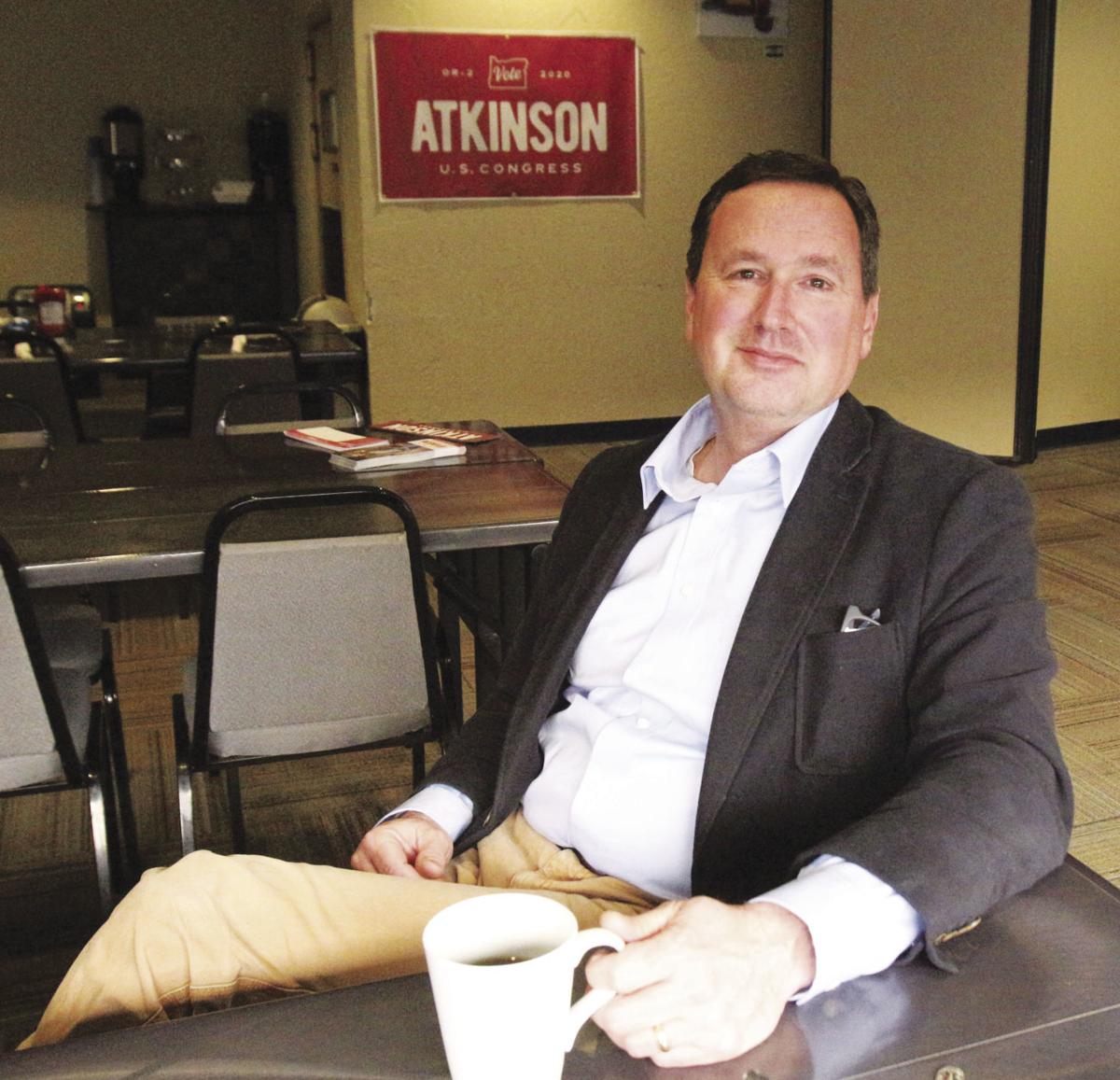 This story has been edited to correct the name of a film Atkinson helped produce.

The Central Point Republican is one of 13 candidates vying for U.S. Rep. Greg Walden’s seat in November. He stopped through Klamath Falls Friday, meeting with City Council President Todd Andres and Klamath County Commission Chair of the board Kelley Minty Morris, and to host a town hall at Waffle Hut. He also planned to meet with the Klamath Water Users Association.

H&N staff asked Atkinson, 49, about his plans to address a variety of issues if elected to Walden’s seat.

“There’s a lot of things that he has worked on that I would want to accomplish,” he added.

If elected, Atkinson plans to focus on water, veterans and battling opioid and drug abuse.

Atkinson is a strong supporter of President Donald Trump on taxes, decreasing regulations, and trade policies. He hired senior strategist Jim Dornan, who worked for Trump, to run his campaign as well as former Oregon State Sen. Bruce Starr.

“Making the Trump tax cuts permanent will give some certainty in Klamath County,” Atkinson said. He opposes all taxes, including a tax on gasoline.

Atkinson describes himself as a supporter of agriculture. He supported the Klamath Basin Restoration Agreement, which failed to pass in the U.S. House of Representatives.

“I think we had a remarkable opportunity,” Atkinson said. “I would like to see the community heal but it’s going to be under a different agreement and I’m not sure what that looks like.”

When asked how he plans to work with the Klamath Tribes, Atkinson wasn’t specific but said his door will always be open.

“I consider Chairman (Don) Gentry a personal friend,” Atkinson said. “They will see me. If Chairman Gentry asks for my help, I will be there.”

Atkinson also supports the removal of four dams along the Klamath River.

He describes himself as 100% “pro-life,” and as having an “A+” with the National Rifle Association.

On the subject of healthcare, Atkinson said he would like to see mental health services covered by insurance companies, and believes Medicare has a chance to continue into the future but that the whole healthcare system needs an overhaul.

Atkinson said he supports current immigration law and tightening border security. When asked about detention centers at the border, he said he is uncertain what to believe but plans to visit the border of Mexico in the future.

“I think inevitably we’ll chart a course that I hope is honoring to the people we represent but also is aggressive in the things I care about,” Atkinson said.

Atkinson is a longtime politician, having served in the Oregon House of Representatives for 14 years. He also unsuccessfully ran in the Republican Primary for Oregon governor in 2006 and was third behind Ron Saxton and Kevin Mannix. Atkinson’s first job in politics was as an intern for Congressman Bob Smith. He took a sabbatical from politics following some health issues once his service in the state Senate was complete in 2013, to spend more time with his family and work on other projects.

“I knew I would come back to public service and I wanted to be at the federal level and so when Walden decided not to run for re-election, I took quite a bit of time to make sure it was right for me,” Atkinson said.

Atkinson has a varied resume outside of politics. He helped produced two films in Klamath Falls, including “A River Between Us,” about the Klamath River, and “Love Has a Place To Go,” on the topic of teen suicide.

A history major in undergraduate school, he has also long had an interest in the Middle East. Currently, he’s working on securing hospitals for relief for Syrian refugees.

He is president of the board of directors for theDove Media, based out of Medford and operated by his father, Perry Atkinson. He is also a member of the Oregon Film Commission and Oregon State Capitol Foundation, which he said he would step down from if elected in November.