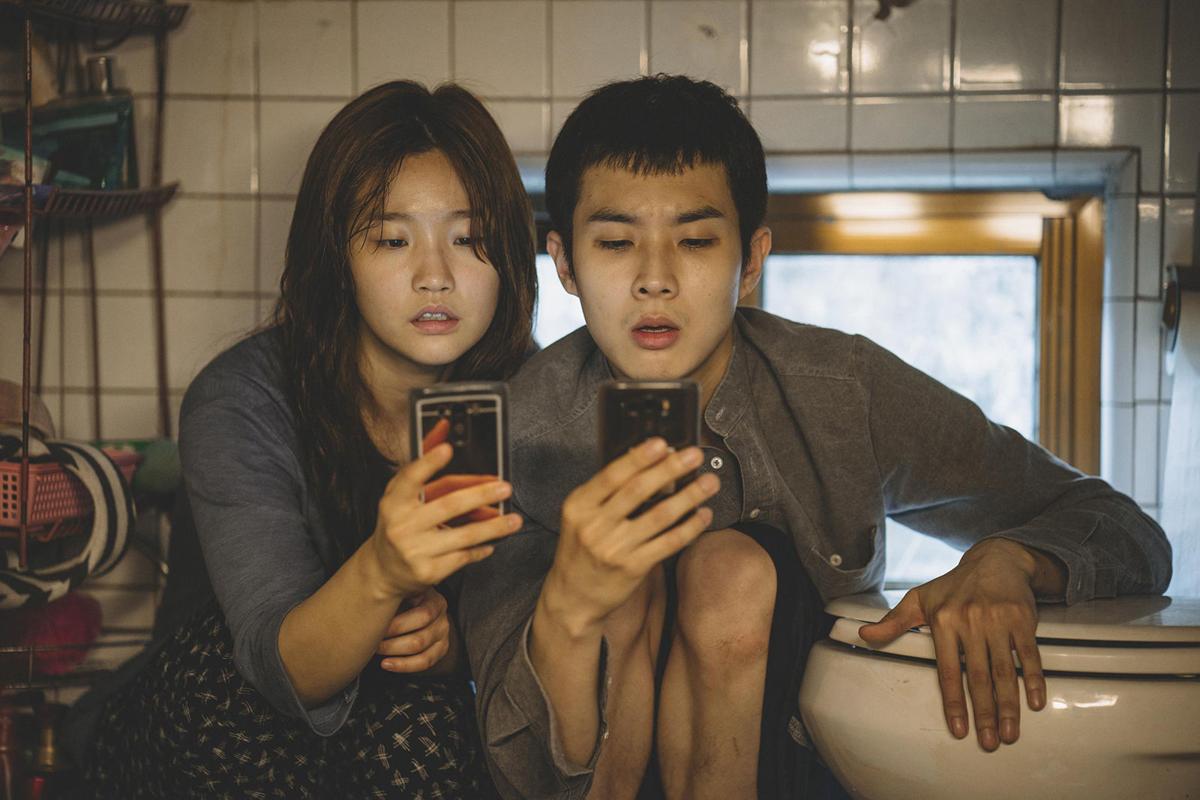 So-dam Park (left) and Woo-sik Choi in a scene from “Parasite.”

So-dam Park (left) and Woo-sik Choi in a scene from “Parasite.”

A video game has yet to win an Academy Award, but that doesn’t mean the influence of the interactive medium wasn’t felt at this year’s Oscars. Consider that two of the awards season’s most talked-about films — Oscar’s big winner “Parasite” and the World War I quest film “1917” — show the ascendancy of interactive entertainment.

While “1917” has occasionally been derided as a video game, largely due to its free-flowing, often third-person camera, the rise of games as a cultural force is also having a more subtle narrative impact as generations weaned on interactive entertainment begin to more regularly mold our content, either by creating it or by choosing what to consume.

The unconventionally thrilling structure of “Parasite,” for instance, unfolds at times in a way that would be familiar to players as they observe the Kim family of four, piece together their moves as if plotting a game. Those moves are constantly thwarted when the film places the Kims in a house in need of constant exploration.

“Parasite” director and writer Bong Joon Ho has spoken of how he requested a detailed 3D model of the upper-class home where much of the second half of the film takes place. “It was like playing a video game where I could roam around the house through my computer,” Bong said in a discussion last year.

The Sam Mendes film “1917,” meanwhile, is more astutely aware that boundaries across pop mediums are forever blurring. Much has been written of how this tale of an early 20th century war uses digital trickery to feel as if it is one long tracking shot. But no doubt at least part of the reason the techniques employed by Mendes and cinematographer Roger Deakins have resonated at the box office is because “1917” mimics the way we watch when we play. And watching games today is as much a part of the culture as playing them.

In such a climate it’s understandable that games would gradually start to hold sway over our so-called prestige narratives. Game-like tools have already made themselves known at the Academy Awards — Alejandro G. Inarritu’s virtual reality exhibition “Carne y Arena (Virtually Present, Physically Invisible)” was awarded a special Oscar in 2017 — but it’s easier than ever to spot the game impact among recent films.

It’s present in the technology behind Disney’s digitally animated “The Lion King.” Video game engines and virtual reality were key in its making. And the basic structure of “Star Wars: The Rise of Skywalker” feels ripped from the most simplistic of games. It’s a film strung together by a series of to-do lists instructing characters to find one item and then find another, thus following an overused narrative format that video games have already started to move away from. Along the way we encounter mini-boss battles leading up to the biggest boss battle at the end. Even when seen on a giant screen rather than YouTube link, “Skywalker” appears very much fun to play.

The level-design-like approach to parts of “Parasite” — each floor of the Park house reveals new challenges — generates great tension in forcing some of the film’s characters to adopt stealth-like game mechanics to pull of risky moves to avoid detection. The characters must either fight or crawl their way around. The house itself becomes a series of game levels, with its most troubling complication locked away in a dungeon-like basement.

But “1917” is where games and film are most in harmony. In fact, “1917” falls back so often on game design elements that one’s enjoyment of it — or lack thereof — may hinge in part on experience with narratives told largely from a first- or third-person point of view.

While often claustrophobic, “1917” dispenses with a choppy, documentary-like feel. Mendes appears less interested with the rawness of war and more intently focused on the endless forward momentum, emotionally and physically, of those trapped in its grips. In turn, “1917” is a film, in game-like fashion, in which the journey matters more than its conclusion.

The film makes this clear early. “Some men just want the fight,” warns a stoically virtuous military captain (Mark Strong), a clever move that sets up the idea that not all orders are heeded and tempers our expectation for the film’s outcome. It also cements the audience’s attachment at this point to the survival instincts of its main character. This, too, is a narrative conceit well-suited to today’s game-raised audiences: “1917” is less concerned with beginnings or endings and more fixed on crafting a moment within a world audiences can see and feel themselves in, and thus we soar and glide intimately around Schofield and Blake as if we are controlling the camera.

That sensibility was no accident. In fact, Mendes has noted in interviews that it was very much intended. The director has said that an influence came from watching his children play the Western-themed game “Red Dead Redemption.” The intimately cropped third-person presentation of many games allows the participant — or, in this case, the viewer — to more easily graft an emotional connection with the protagonist.

Mendes called the sensation “hypnotic” in Variety. And as he relayed to the Financial Times, “We experience life as one continuous shot. It’s editing that’s the gimmick. This allows you a much more sophisticated degree of storytelling. Making a movie always asks the question: Is this really the only way to tell this story? You often find yourself defaulting to standard ways of covering a scene and never challenging it.”

Game developers had already been experimenting with vantage points that presented minimal or invisible edits. The 2018 Sony game “God of War,” which aimed to explore newfound themes of vulnerability amid a mythological series often focused on violence and revenge, was painstakingly designed as a single take. “You’re gonna get a sense of immediacy and connection to these characters, an unrelenting feel to the adventure that you can’t get in any other way,” director Cory Barlog told Polygon.

“1917” possesses an acute awareness of our eye movement. The camera seems to drift where we will it to, as Mendes and co-writer Krysty Wilson-Cairns laid out a story that is told as much through its sets as it is its dialogue and action. When Schofield or Blake are walking over uncompromising terrain, traversing trenches, trying to avoid a stumble into mud or balance on a fallen bridge, the camera moves either just above shoulder height or ever so slightly to the left or right, giving us a vantage point that, while cropped, isn’t oppressively so. The sense is that the field of view of the characters is also ours.

A game will reward those who linger and explore, revealing its story via the details that dot its setting, and both “Parasite” and “1917” award those who go looking for plot amid its ambiance. In “1917” we spend little time with characters other than Schofield or Blake. Most of those who populate “1917” are essentially NPCs, or non-player characters, who serve to either offer brief narrative pushes or background detail and then disappear.

In “Parasite,” the contrast behind the film’s two homes — those of the poverty-stricken Kims and the extravagant Parks — telegraph more than just class divides. The world of the Kims is perilous and fragile while the minimalism of the Parks hints at something not just unattainable but oppressive, so much so that shortly after the Kims plant a flag, they are sent rushing back to start in a more desperate state. Tonal shifts in each are telegraphed by the environment.

The contrast in “1917” between British and German trenches is clear by where the camera takes us. “Paradise Alley” appears scribbled sarcastically on the former, while in the latter filmmakers focus on orderly listings of supplies, offering a hint that our soldiers are out of their element in more ways than one. Tension comes not from a terse audio cue but Blake noticing that the size of the rats have gotten noticeably bigger. That the objects that obstruct our leads have become larger or more plentiful is an obvious video game tell that challenges are about to ramp up.

Combat, too, is framed as if the viewer is a player. The larger war theater is framed either from a distance or as something that happens around our leads rather than to them. When Schofield runs amid a destroyed French village and aims to avoid detection largely in the black of night, “1917” shifts in tone to that of a survival horror game.

Schofield here doesn’t use a bullet to take out an enemy, but instead sneaks around walls as if he’s in the popular Sony game “The Last of Us,” needing to subdue his foes with strategic, silent kills. Bong, too, applies similar covert tactics, at one point placing three-fourths of the Kims underneath a layered coffee table just out of the gaze of Dong-ik (Lee Sun Kyun) and Yeon-kyo (Cho Yeo Jeong). As the Kims — Ki-woo (Choi Woo Shik), his sister, Ki-jung (Park So Dam) and father Ki-taek (Song Kang Ho) — slither away, light from a window is framed as if touching it would set off unseen alarms.

In games, we buy these often implausible moves because there’s a puzzle-like notion to it, and as players the pressure is heightened when trying to avoid a clear gaze when we dictate the movement of the character; Mendes gets around this by having the other person in earshot being too drunk to piece together what’s happening while Bong’s characters are in deep sleep after a moment of intimacy.

Both films show that the vocabulary of video games is no longer relegated just to games.

Where “1917” differentiates itself is in its attempt to make the viewer feel like an active player. When it came to discussing “1917’s” chances at the Academy Awards, much was made of the film not receiving any acting nominations. But the job of the film’s male leads wasn’t a traditional one. They were not there to give harrowing monologues or vocalize the horrors of war. In fact, by the end of the film we know only the basics about Blake and Schofield.

A criticism of big-budget video games is that too often the protagonists are undefined, in that we are given very little information about who they are or what they’ve been. But in “1917,” our connection to the world created by the filmmakers defines how we identify with the characters. For if we are to feel their actions and their viewpoints, their roles are not just to act but to be avatars.