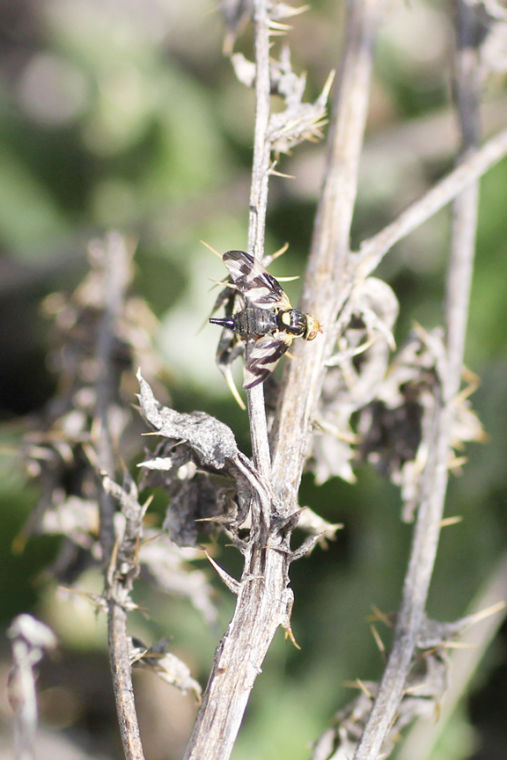 A gall fly released in Sprague River as method of biological control to manage thistle infestations. 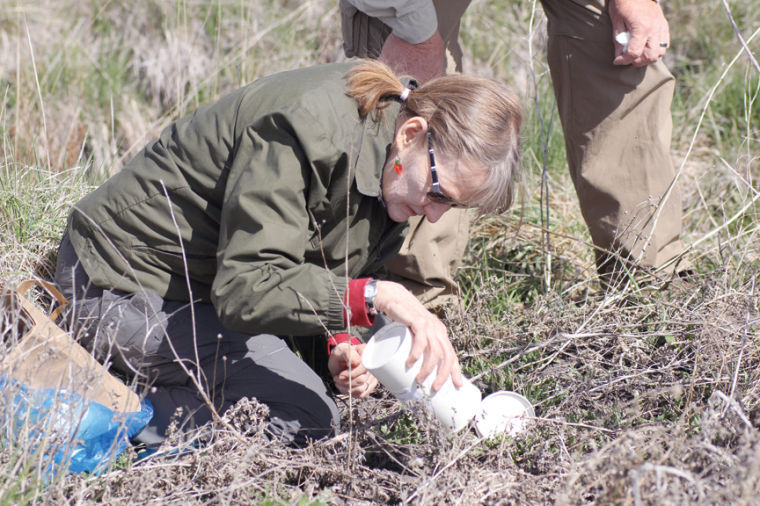 A gall fly released in Sprague River as method of biological control to manage thistle infestations.

“Here’s one!” shouted Steve Sheehy, pointing to the ground near a barbed wire fence in the Sprague River Valley.

“The questions is, ‘How many flies have emerged?’ ” Victoria Tenbrink called back.

Tenbrink, the Klamath Lake Land Trust (KLLT) conservation manager, and Sheehy, a lichenologist, are searching for the cache of woody gall fly pods they dropped at the 316-acre KLLT property in March. The bulbous pods, which develop after a female gall fly lays eggs on a thistle stem, contain matured flies that will prey on Canada thistle. About 100 gall pods were scattered at the property earlier this spring. Now, Tenbrink is adding stem-mining weevils as another method to biologically control invasive Canada thistle.

“We prefer a combination of those two control agents together,” said Eric Coombs, an entomologist for the Oregon Department of Agriculture (ODA).

Before releasing the 50 miniscule stem-mining weevils Tenbrink ordered from the ODA, she cautiously peeked inside their cylindrical shipping container.

“They look like they are in really good condition. We have high hopes,” Tenbrink said. “If they take, they’ll move out and help the whole Sprague valley.”

In January, the Klamath County commissioners approved the noxious weed list for 2014, which classifies Canada thistle as a “B list” noxious weed in Klamath County. Fifteen plants are on the B list, indicating a species is abundant in the county, but may have limited distribution.

According to Todd Pfeiffer, Klamath County vegetation manager, Canada thistle has been established in the county for years.

“It’s extremely widespread. It’s not ever going away,” he said.

Tenbrink said Canada thistle is most abundant in disturbed areas along the fence line and ditches of Land Trust’s property, which is being converted to non-irrigated pasture. Tenbrink doesn’t expect the weevils and gall flies to eliminate the thistles, but she believes the insects will help make the infestation more manageable.

“They are never going to wipe out the plants," Tenbrink said of the weevils, "but they can weaken the population to be more susceptible to other control methods."

Stem-mining weevils are considered “host specific,” meaning they prefer to prey on Canada thistle and typically steer clear of other species. Tenbrink explained weevils bore into stems to “mine” tissue from the center, interrupting the flow of nutrients and water. She said the injuries often cause thistle blossoms to die or become deformed, which lessens the opportunity to make seeds for new plants.

“They weaken the plants and cut the numbers down, so then your manual control — hand pulling — is a lot less of a job.

“We kind of feel like it’s like a yard full of dandelions. If you can get a handle on it, then you just have to do maintenance every April and May,” Tenbrink said.

According to Pfeiffer, although Canada thistle commonly spreads from seed dispersal, the majority of new plants come from its vast root system. Any disturbance to Canada thistle roots — especially tilling — can cause a dramatic increases in growth and abundance, he said.

“The worst thing you can do for thistle is take a hoe to it,” Sheehy said.

According to Coombs, weevils were introduced in Oregon as a method of biological control around 1981. He pointed out that weevils and gall flies can be effective in large numbers, but they are not fast-acting biological control agents. In addition, Coombs estimated less than five applicants receive weevils each year because the tiny insects are so difficult to collect.

“It can take up to 10 years to build up enough to have cumulative control of an area,” he said. “It takes a long time for these insects to put the hurt on Canadian thistle.”

For more information about biological control for weeds, contact the Oregon Department of Agriculture Noxious Weed Control division at 503-986-4621.