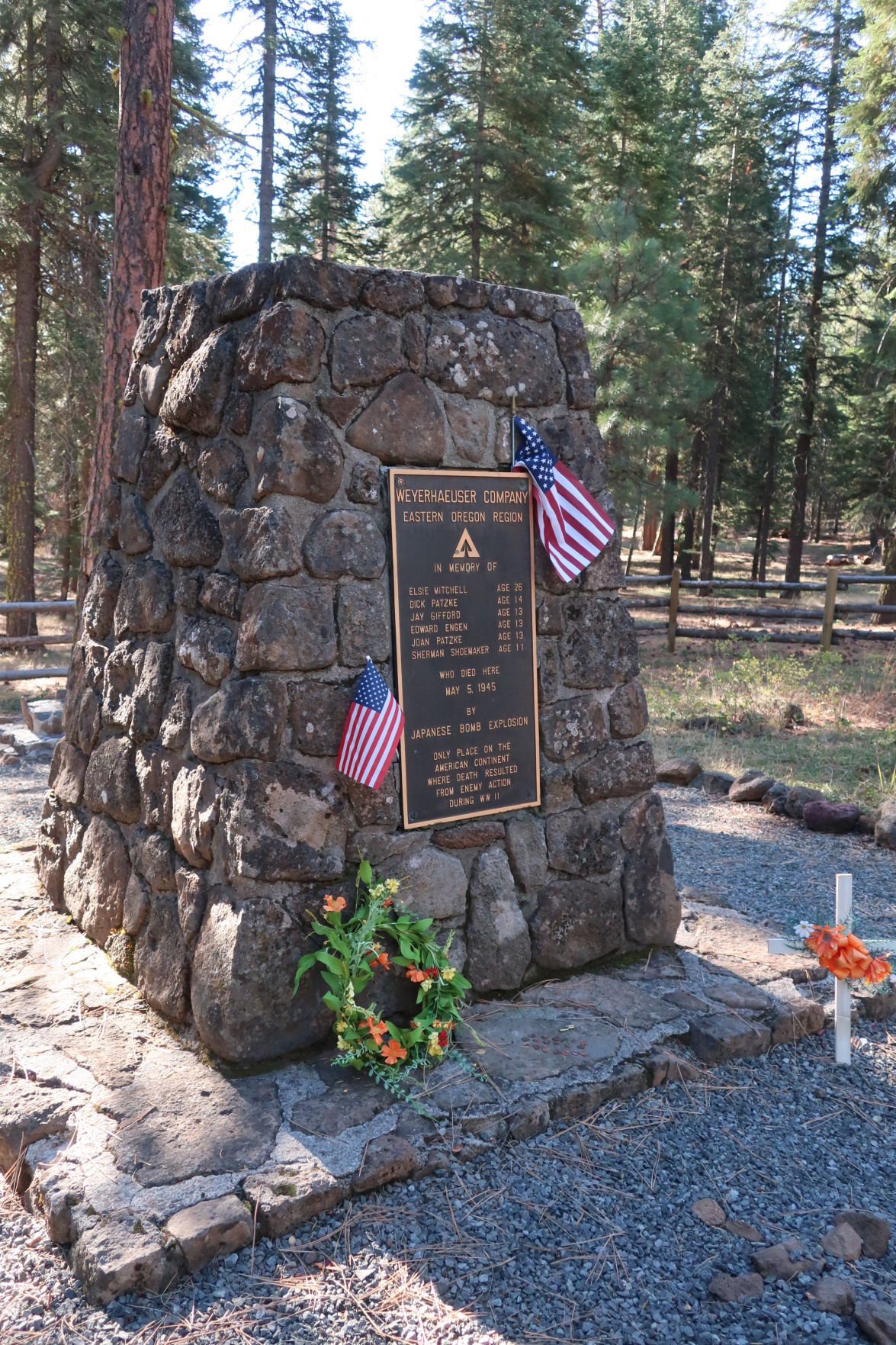 A monument marks the spot where a Japanese bomb exploded in the forest outside of Bly, killing children out for a picnic. 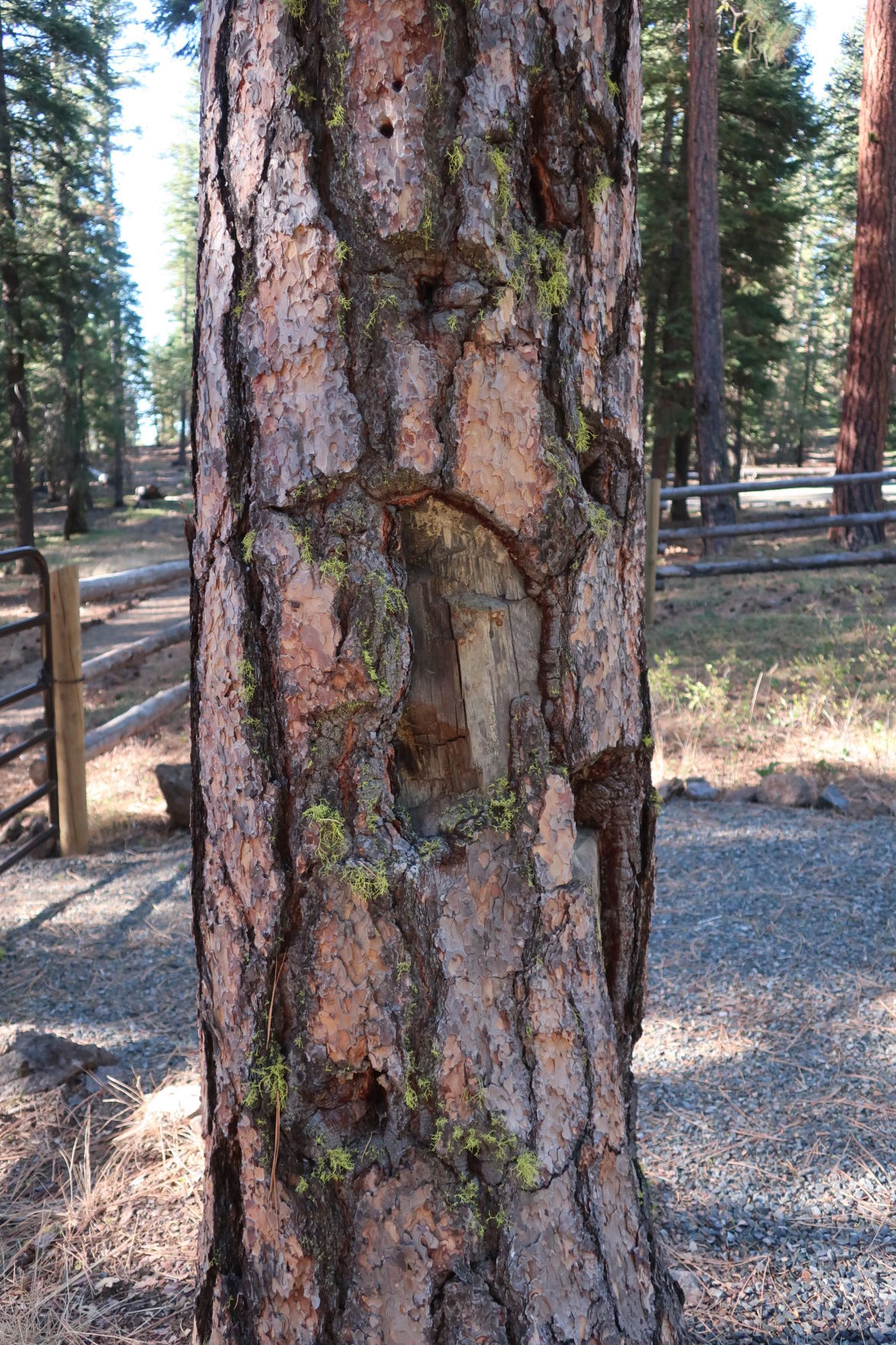 Ponderosa pine trees in the area still bear scars from the blast. 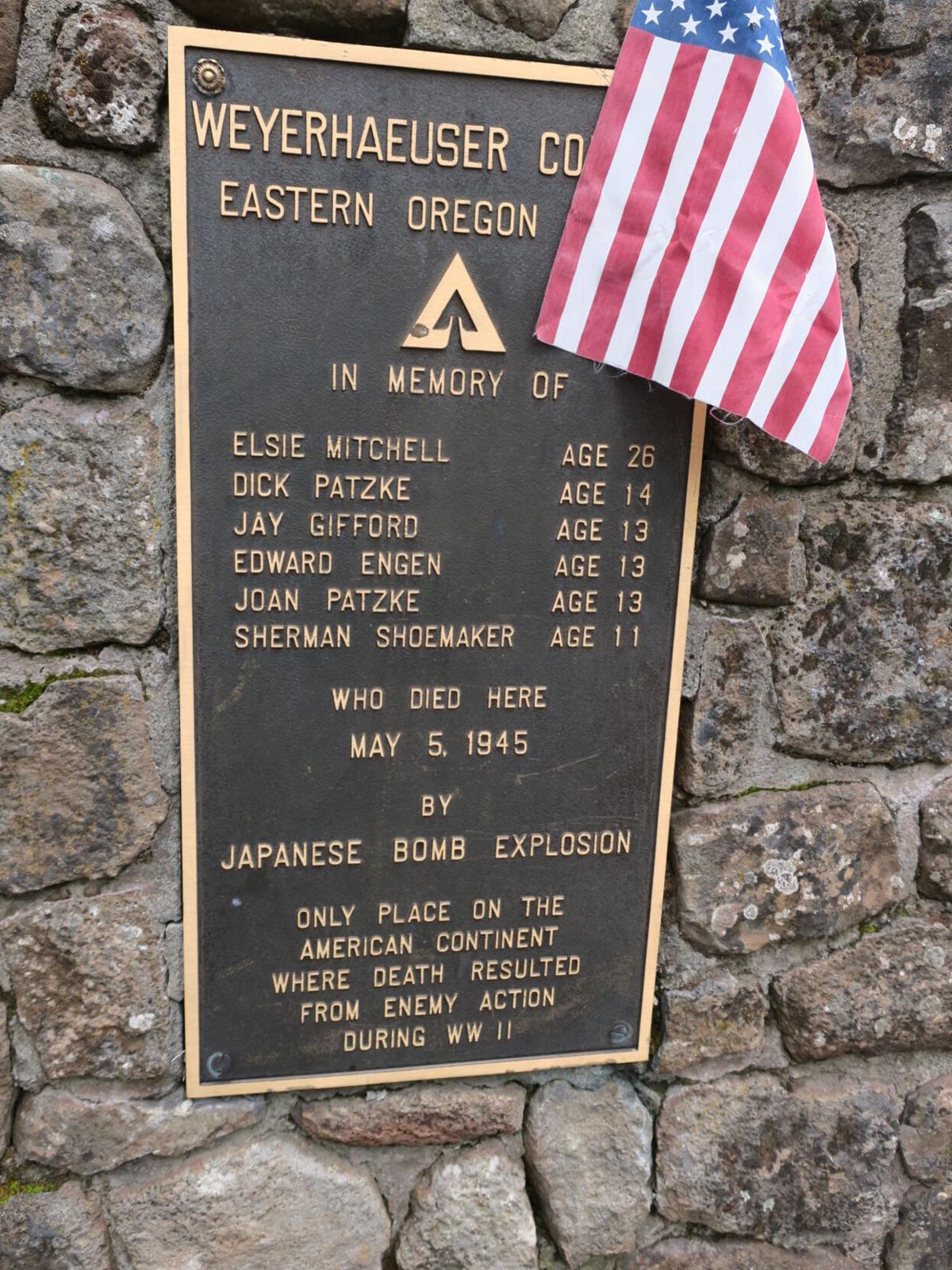 A plaque at the site lists the names of those killed in the explosion.

A monument marks the spot where a Japanese bomb exploded in the forest outside of Bly, killing children out for a picnic.

Ponderosa pine trees in the area still bear scars from the blast.

A plaque at the site lists the names of those killed in the explosion.

The anniversary of the day when six people died following the explosion of a Japanese balloon bomb is being canceled once again because of concerns stemming from the ongoing COVID-19 pandemic.

The Mitchell Recreation Area, previously known as the Mitchell Monument, is the only place in the United States where Americans were killed as the direct result of enemy action during World War II.

Wednesday, May 5, marks the 76th anniversary of the deadly incident that took place outside the community of Bly. A major gathering was originally planned for last May’s 75th anniversary. Because of the pandemic the gathering rescheduled to September, then rescheduled again to May 5. Late last month, officials with the Fremont-Winema National Forest, Bly community action team and Standing Stone Church of the Christian and Missionary Alliance decided to cancel the event “for public health and safety.”

On May 5, 1945, Rev. Archie Mitchell took his pregnant wife, Elsie, and five Sunday school children from the Christian and Missionary Alliance church on a picnic and outing. The logging road they were following was blocked so they stopped next to Leonard Creek, about 11 miles east of Bly near Gearhart Mountain. Mitchell’s wife and the children had gotten out of the car.

While Mitchell was parking, he reportedly heard one child say, “Look what I found!” Moments later there was an explosion. Elsie Mitchell, 26, who was pregnant, and all five children — Dick Patzke, 14, Jay Gifford, 13, Edward Engen, 13, Joan Patzke, 13, and Sherman Shoemaker, 11, — were all killed instantly.

The children had found the remains of a Japanese balloon bomb, one of approximately 9,000 launched from Honshū, Japan, between November 1944 and April 1945. The balloons drifted across the Pacific Ocean to North America via the jet stream in about three days. The hydrogen-filled balloons were 33 feet in diameter and carried five bombs, four incendiaries and one anti-personnel high explosive.

It is believed as many as 1,000 balloons may have reached the United States and Canada, but there were only 285 confirmed West Coast sightings. Two balloon bombs were later found in Michigan.

Various ceremonies have been held at the site over the years.

In 1976, Sakyo Adachi, a Japanese scientist who helped plan the balloon offense, visited and laid a wreath at the monument. He later sent a letter of apologies to the Patzke family for the loss of their two children. In 1995, Japanese students sent 1,000 paper cranes, a Japanese symbol of peace and healing, to the families of the victims. Six cherry trees were also delivered to Bly to be planted at the site. One of the cherry trees was planted just north of the fenced monument site. The remaining trees were planted inside the fenced area. Later that year, more than 500 people attended the 50th anniversary re-dedication ceremony at the Mitchell Monument site.

The Mitchell Monument, designed by Tom Orr, was erected by Weyerhaeuser in 1950 and the stone structure was built by Robert H. Anderson, a local stonemason. The monument t is constructed of native stone and displays a bronze plaque with the names and ages of the victims of the balloon bomb explosion.

Adjacent to the monument is the “shrapnel tree,” a ponderosa pine that still bears scars from the explosion.

As a remembrance, the forest has provided packets that include a commemorative booklet, event DVD recorded with individual presenters, a copy of the poem “One Day” written by Grammy Patzke, and paper cranes, symbols of healing and peace. Packets are available by emailing mitchellmonument75@gmail.com.