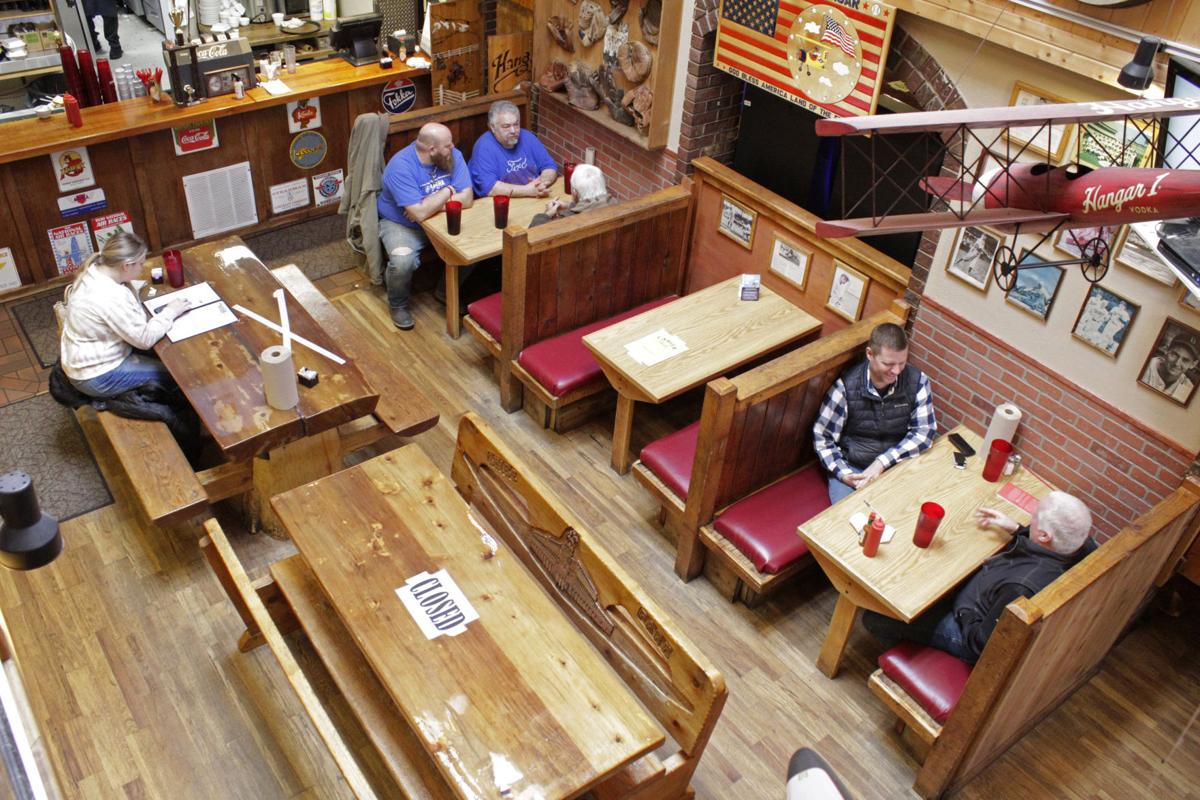 Diners sit at the Carver Hangar, a restaurant in Boring on Jan. 6. As coronavirus deaths soar, a growing number of restaurants like Carver Hangar in states across the country are reopening in defiance of strict COVID-19 rules that have shut them down for indoor dining for weeks, or even months. 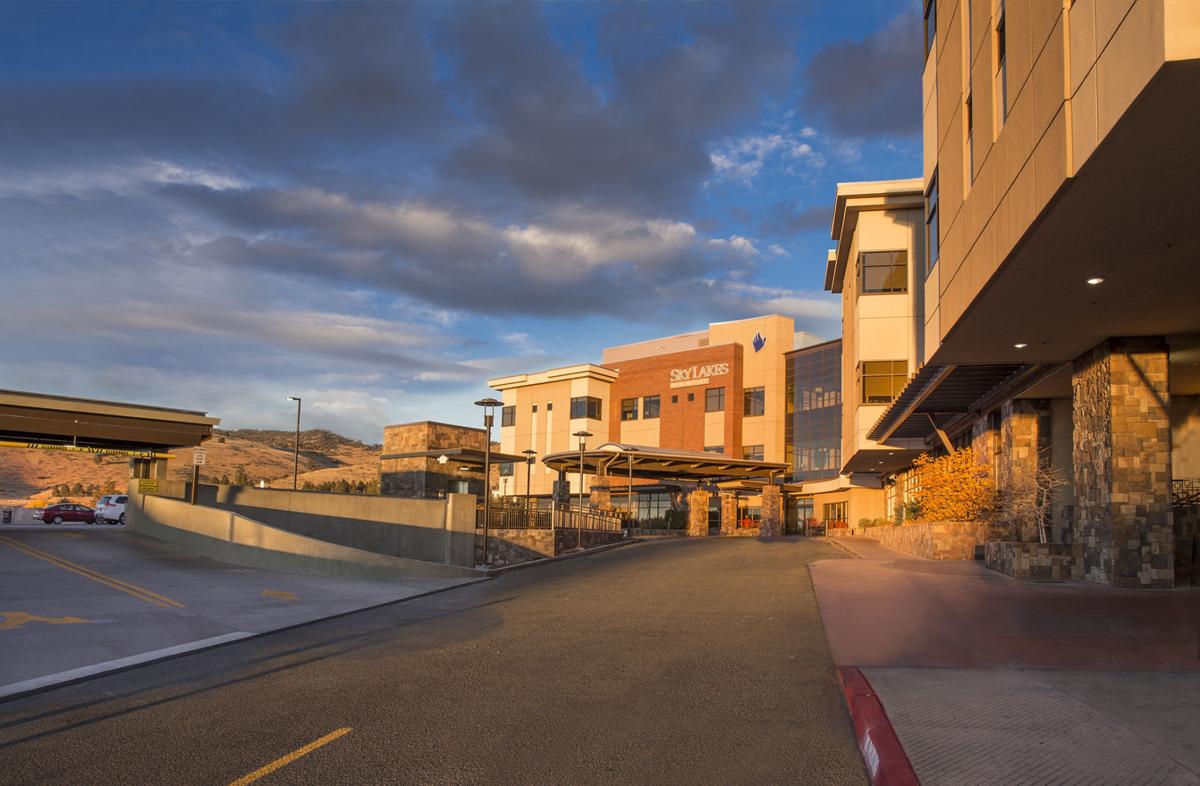 Diners sit at the Carver Hangar, a restaurant in Boring on Jan. 6. As coronavirus deaths soar, a growing number of restaurants like Carver Hangar in states across the country are reopening in defiance of strict COVID-19 rules that have shut them down for indoor dining for weeks, or even months.

Gyms and indoor dining have been closed since Governor Kate Brown issued a “freeze” in November, and many business owners and employees have been struggling financially.

Meanwhile, Sky Lakes Medical Center reached capacity Monday night, as staff and providers struggled to attend to everyone needing immediate care along with patients in the COVID-19 isolation and intensive care units.

Until the county’s case metrics improve, indoor dining is prohibited, fitness establishments must close and residents of long-term care facilities cannot host visitors indoors, according to OHA. Gyms and indoor dining would be allowed to reopen at minimal capacities under the next lowest risk level, should the county reach it.

In a Tuesday statement, chamber committee members and staff said they supported businesses making the “tough decision” to reopen, as long as they follow guidelines from the Centers for Disease Control aimed at keeping employees and customers safe. A group of business owners met with the committee last week, concerned about the financial toll that shutdowns had taken on them and putting forth a plan to quietly reopen in order to stay afloat.

The statement emphasized that the reopenings aren’t intended to defy public health guidelines and that they’re instead being done to bring businesses and their owners back from the brink of financial ruin. The chamber said it wants these business to operate as safely as possible.

Chamber Executive Director Heather Tramp said she felt the group’s request was “very reasonable” given the local economic impacts of COVID-19 and its accompanying business shutdowns. She said the chamber isn’t intending to make light of the virus itself, advocating for a switch of OHA guidelines with CDC guidelines.

“We’re not supporting that all businesses open,” Tramp said. “We’re not leading that charge, per se. But business owners need to make the decision that’s right for them.”

Tramp said about a dozen business owners had plans to reopen, and many of them did on Monday. However, she declined to provide any of their names, citing concerns of penalization from government agencies like OSHA and adding that businesses who reopen wish to do so without fanfare.

When asked how local community members who feel safe doing so can support those establishments if they don’t know which ones have reopened, Tramp said, “Think of your favorite place, and stop by there to see.”

CDC guidelines for non-healthcare businesses stipulate that employees should wear masks at all times while at work, social distance from other employees and customers, stay home when sick and get tested often for COVID-19. They also say employers should conduct health checks to monitor workers for symptoms of COVID-19, allow their employees more flexible sick leave, ensure frequent disinfecting of surfaces and take appropriate measures if a staff member tests positive for the virus.

Tramp said the group of business owners who approached the chamber appeared to take those precautions seriously, and that many had thoroughly researched and were following the guidelines already.

“I think they’re going to do the responsible thing,” she said. “They want their customers healthy, too. They care about our community, too. They’re living and breathing in it.”

Given that businesses that reopen will violate state guidelines, they can expect fines or permitting issues as a result. Tramp said the chamber doesn’t provide funding or legal assistance to members in those situations. Instead, they refer people with questions to OSHA regulations and codes, allowing them to make their own judgments about potential consequences and whether they’re worth the risk.

McNiven helped organize the planned, simultaneous reopenings of businesses that currently cannot — such as gyms, restaurants, bars and theaters — and he lobbied the Klamath Chamber of Commerce to make their public statement. He said appeals to Governor Kate Brown and state agencies have gone unheard for months.

The local rollout has been less impactful than he hoped, at least so far.

“Honestly, it hasn’t quite gone as expected,” he said Tuesday afternoon. McNiven said businesses that told him they would open have not done so yet. He chalked that up to their concerns about OSHA fines, loss of liquor licenses and possible negative community response.

He said about “eight or nine” businesses have reopened, however, and are therefore operating in violation of state public health regulations. He said most were restaurants and bars, in addition to one or two gyms.

McNiven said those businesses were unfairly targeted by state rules and do not endanger public health any more than Walmart or other grocery stores.

He said many of them have not gone public with a declaration that their doors are open and taps are flowing, however. McNiven said OSHA has targeted businesses that openly flout the rules, but many that just operate quietly have avoided fines and retaliation.

“I think that’s their thought process — just keep your head down and go about your business,” he said.

The closing of gyms, bars and restaurants across the world during the pandemic has prompted a debate among scientists, public health officials and business advocates about whether indoor establishments whose activities reduce the effectiveness of masks contribute to the virus’s spread. Fitness centers may contain people who breathe heavily while exercising and sweat on their masks, sending more virus-laden droplets into the air to be picked up by someone else. Inside restaurants and bars, people talking without their masks after receiving their food or beverages also expel those droplets without outside breezes to neutralize them.

Several studies have found a link between increased spending on restaurants and spikes in cases, but the data tend to be location-specific. Contact tracing in most places can’t usually identify a specific place where someone caught COVID-19 if they can’t identify a previous case they may have come into contact with.

While the CDC hasn’t explicitly recommended closing businesses to prevent the spread of COVID-19, its list of considerations for bars and restaurants emphasizes cooperation with state and local public health mandates.

“These considerations are meant to supplement — not replace — any state, local, territorial or tribal health and safety laws, rules, and regulations with which businesses must comply,” the webpage said.

The chamber’s release mentioned a claim from business owners that none of Klamath County’s cases can be traced to their establishments. But Delia Hernández, communications officer for OHA, said contact tracers find that many people who test positive for COVID-19 have attended social gatherings both in private homes and in bars and restaurants, often with the same people.

“Because of this overlap, we cannot definitively pinpoint where transmission occurs, but there are associations with these social get-togethers,” she said.

That doesn’t mean the other 54.4% of cases were all transmitted at local businesses, but it does mean that the virus is no longer confined to private gatherings — it can and is being transmitted in public places.

Tramp said community members worried about the heightened spread of the virus should try to frequent essential businesses that have senior hours, curbside service or other measures to limit contact with other people.

“Everybody needs to do their part to be careful,” Tramp said. “I think there’s some due diligence that we can all do to protect ourselves and our loved ones.”

Hernández said OHA places counties in the “extreme risk” category for a reason: To limit the human contact that drives the virus’s spread. She said many communities in Oregon are close to reaching the thresholds for having their counties’ statuses bumped down to “high risk,” which would allow indoor dining and gyms to reopen, but that if businesses reopen prematurely, it could jeopardize that progress.

“If businesses reopen too early and instead create new spikes in COVID-19 cases, the actions of a few business owners could set the entire community back and keep them in the Extreme Risk category for even longer,” she said.

Sky Lakes, which has been a member of the Klamath County Chamber of Commerce for decades, is perhaps one of the only businesses in Klamath County that would be grateful to have fewer customers right now.

But spiking COVID-related hospitalizations have overworked their providers, nurses and support staff for months.

“Our staff are stretched thin and are approaching burnout,” said Paul Stewart, president and CEO of Sky Lakes.

On Monday night, after weeks of flirting with reaching hospital capacity, there just weren’t enough staff to handle any new patients. During the past two weeks, Sky Lakes has consistently had between 15 and 20 patients in its COVID-19 unit, which has been expanded twice since November.

Stewart said the hospital fully supports local businesses and is sympathetic to how shutdowns have devastated them. He added that he hopes those choosing to reopen will strictly follow CDC guidelines, but that observations of the safety practices of various establishments in the county concern him.

“This is not to place blame for the number of COVID-19 cases on these businesses, yet many businesses are routinely not enforcing mask wearing by their patrons,” Stewart said. “We would hope those same businesses would demonstrate support for Sky Lakes and the brave women and men on the frontlines of care by strictly enforcing mask requirements and physical distancing.”

Stewart said the best way to reach a point where businesses can safely reopen in accordance with state guidelines is getting as many people in the county vaccinated as possible once it’s their turn. In the meantime, he urged the community to continue wearing masks, and practice physical distancing.

“This will be the only way to rapidly get to a point of community immunity that will allow greater levels of commerce and closer interactions,” he said.

Tramp emphasized that the group of businesses choosing to reopen is taking virus prevention measures seriously, and that based on the data surrounding the spread of COVID-19 in Klamath County, she doesn’t expect the reopenings to result in a case spike.

“We don’t want to downplay anyone’s worries. We know the virus is real. We also realize that people are about to lose their businesses,” Tramp said. “I think we have to weigh both of those things when making our policies.”

Watch now: Packers fans and 2 Buccaneers’ fans gear up for the big game

Watch now: Packers fans and 2 Buccaneers’ fans gear up for the big game

Who should have priority for a COVID-19 vaccine?